The goal of the HSR technique is to search for an image that has both high spectral and high spatial resolution. The image is formulated as with B, W, and H representing the number of spectral bands, width and height of the image, respectively. The HSR task of this research takes two inputs, an HSI with high spectral resolution and low spatial resolution (w < W and h < H) and an RGB image with low spectral resolution and high spatial resolution (b < B). According to the LMM of Lanaras et al. [28], the intensities at a given pixel of Z are described by an additive mixture: with a matrix of endmembers and a matrix of per-pixel abundances. By this definition, most p endmembers (materials) are present in the image. The endmembers E act as non-orthogonal bases to represent Z in a lower dimensional space with rank {Z} ≤ p.
The actual high-resolution RGB image I is a spectrally downsampled version of Z: where is the spectral response function of the sensor. The spatial response function S of the hyperspectral camera and the spectral response function R of the conventional camera form part of the camera specifications and are assumed to be known. The spectral response function of the Nikon D700 offered in the work of Jun et al. [29] is used as R for this research.
The low-resolution HSI, H, is defined as: where is a low-resolution matrix of per-pixel abundances. The reason the per-pixel abundances of H are defined not as a factorization of EA and spatial downsampling operator, but as another form of matrix, is that the pixel location of the super-resolution result is not the same as that of H.
The low-resolution RGB image L is defined as: which represents the factorization of the spectral response function R and the low-resolution HSI, H. The constraint condition of this paper follows that of Lanaras et al. [28]. The main assumption of the constraint is that the endmembers are reflectance spectra of individual materials, and the abundances are proportions of those endmembers. As a consequence, the factorization is subject to the following constraints: with the elements of A. Here 1 denotes a vector of 1s compatible with the dimensions of A.

The method proposed in Section 3.1 proceeds with the following procedure, as described in Table 1. The algorithm requires H and I, which are low-resolution HSI and high-resolution RGB images, respectively. Because Z will be reconstructed using endmember abundance with the same resolution as I, the resolution of I has to be an integer multiple of the resolution of H with upsampling rate S. Additionally, RGB camera sensitivity C is required to reconstruct an RGB image from H.
The proposed method begins by constructing a low-resolution RGB image L from H, using C. The camera sensitivity for each RGB channel is multiplied by the spectral information of H of each pixel, and normalized into an 8-bit-precision RGB image L, for further histogram equalization with I. Then, the histogram of I is matched with that of L, so that I has the same color distribution as L. The histogram equalization is performed using a MATLAB built-in function [30]. The next step is to find the initial values, and , to optimize Z, which consists of the endmember vector E and the per-pixel abundance vector A. Simplex identification via split augmented Lagrangian (SISAL) [31] initializes endmember E and sparse unmixing by variable splitting and augmented Lagrangian (SUnSAL) [32] initializes A’, respectively. SISAL is an algorithm for unsupervised hyperspectral linear unmixing and finds the minimum volume simplex containing the hyperspectral vectors, by augmented Lagrangian optimizations. SUnSAL is an eigen decomposition-based hyperspectral unmixing algorithm. The MATLAB code for SISAL and SUnSAL is available at the author’s webpage [33]. The low-resolution per-pixel abundance A’ is upsampled with S and will be used as the initial point of the low-resolution step. The optimization is performed with a projected gradient method for 7a. The equation for the projected gradient method is: where is a nonzero constant and is a proximal operator that is constrained to 7b. The optimization procedure is repeated for until convergence, or until the pre-determined error rate, calculated by an error metric, is reached.

To confirm the limitation of current methods under color space difference and pixel mismatch, we applied the method of Lanaras et al. [28] to the cases where pixel mismatch exists, and color spectral functions are not identical for H and I. The method of Lanaras et al. implicitly assumes that there is no pixel mismatch or color difference between high resolution RGB image and low resolution HSI, and the effects of this assumption are investigated using images with pixel mismatch and color difference. A public hyperspectral database, called the Harvard dataset [34], was used for the evaluation of the proposed algorithm. Because the purpose of the Harvard dataset [34] is to establish the basic statistical structure of HSIs of real-world scenes, the dataset is in accord with the condition in which the proposed algorithm will be used. The Harvard dataset [34] has 50 indoor and outdoor images recorded under daylight illumination, and 27 images recorded under artificial or mixed illumination. The spatial resolution of the images is 1392 × 1040 pixels, with 31 spectral bands of width 10 nm, from 420 to 720 nm. The original HSIs are used as ground truth for the evaluation.
First, the upper and left sides of the original HSIs (Figure 2a) were cut off by 50 pixels in both horizontal and vertical directions to form the pixel mismatch dataset (Figure 2b). Comparing Figure 2a,b, it can be observed that the location of the window on the left side is slightly translated, potentially due to the lower per-pixel performance of the super-resolution process. Second, RGB images were reconstructed as displayed in Figure 2c, using a color spectral function, Nokia N900, which was different from the one used in optimization. The camera sensitivities of the Nokia N900 and Nikon D700 are displayed in Figure 3. Figure 2c has relatively brighter color space compared to Figure 2a, which causes low spectral accuracy of a super-resolution result. The maximum RGB value of the test was normalized to 1, which is a common image processing technique for enhancing the visibility of a reconstructed image. The experiments were conducted with the same implementation details as in [28] for both datasets, but the operation was forced to run 1500 iteration for the 11 selected images. For a fair comparison between the proposed algorithm and other methods, the same error rate method was used as the primary metric. The datasets were tested using the root–mean–square error (RMSE) of the estimated high-resolution HSI Z, with respect to the ground truth image :
A spectral angle mapper (SAM) [35] was also adopted; it is defined as the angle in between the estimated pixel and the ground truth pixel , averaged over the entire image and given in degrees: where is the vector norm.
The test results were tabulated in Table 2 for comparison with the results of [28]. The algorithm of [28] showed accurate results compared to other methods, such as those in [24,26,36,37], and [38], but the experimental results indicate that a small pixel mismatch and color difference would lead to a higher error rate. This phenomenon is theoretically inevitable for algorithms that optimize the high-resolution HSI for both the RGB image and low-resolution HSI. For instance, the low-resolution step of [28], minimizing the objective function of endmembers in the image, is highly governed by the abundance of the high-resolution HSI. Therefore, inputting two images with pixel mismatch, as displayed in Figure 2a,b, means optimization toward two different points, and inevitably results in poor accuracy. This phenomenon appears in Figure 4a, which shows an error rate of > 10% where the spatial mismatch is significant. Color difference is another factor that should be considered in super-resolution problems. The high-resolution step requires an accurate spectral sensitivity function to recover an RGB image close to the input RGB image. However, the sensitivity of the hyperspectral camera usually differs from that of the RGB camera, as displayed in Figure 2a,c, complicating the initialization of the color space between the RGB image and HSI. As displayed in Figure 4b, the color distribution difference caused significant errors in parts of the HSI. The method is also inefficient in finding the spectral function of the RGB camera every time the input RGB image is changed. Therefore, poor results in both the pixel mismatch and color difference dataset indicate the need for the algorithm to account for these issues in the super-resolution problem.

B.K. and S.C. conceived and designed the methods; B.K. developed the software; B.K. performed the validation and visualization of results; B.K. and S.C. wrote the paper; S.C. supervised the research. S.C. acquired the research funding.

This research was funded by Ministry of Land, Infrastructure, and Transport of the Korean government.

This research was supported by a grant (19SCIP-C116873-04) from the Construction Technology Research Program funded by the Ministry of Land, Infrastructure, and Transport of the Korean government. 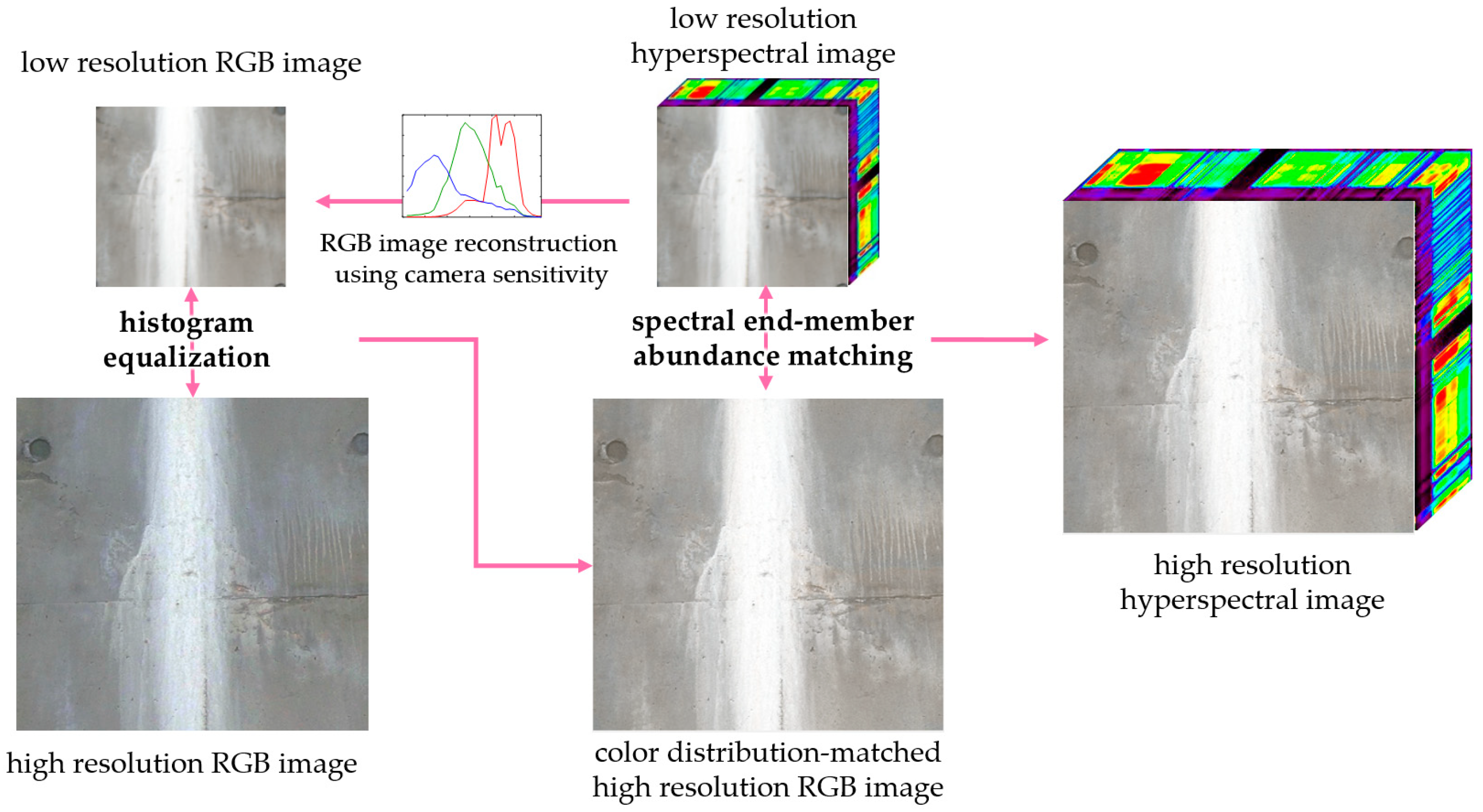