The Use of High-Alloyed EAF Slag for the Neutralization of On-Site Produced Acidic Wastewater: The First Step Towards a Zero-Waste Stainless-Steel Production Process
Previous Article in Special Issue

Simple Assessment of Height and Length of Flight in Complex Gymnastic Skills: Validity and Reliability of a Two-Dimensional Video Analysis Method

Video analysis is common in elite sports and covers different areas of application. In individual sports, especially acrobatic sports, video analysis is used to compare and improve complex skills [1]. For quantifying biomechanical aspects of such skills, such as score-relevant kinematic variables of vaults in artistic gymnastics, 3D motion capture (3D video analysis) is used. [2,3]. By means of video analyses, Brehmer and Naundorf [4] created reference values for kinematic parameters, indicating the safe execution of vaults. To make use of such reference values, measuring certain kinematic parameters in routine training becomes crucial, so that gymnasts’ performances can be compared with the requirements of certain vaults. In regard to monitoring training progress, using video analysis during routine training is intriguing [2,3].
The gold standard for complex kinematic analyses is 3D motion capture, with which movements can be analyzed in sagittal, frontal, and transversal planes simultaneously [5]. However, precise 3D motion capture is associated with considerable financial, spatial, and temporal issues, and is therefore uncommon in routine training settings [6]. Two-dimensional video analysis (2D analysis), if sufficiently accurate, could offer a more practical alternative for measuring kinematics during training, especially since advancements in smartphone and tablet technology are continually making high-definition video capture and analysis more convenient. Aside from convenience while capturing motion, 2D video is faster, cheaper, and requires less prior knowledge compared to 3D analysis [1,7]. Nonetheless, although multiple studies showed moderate validity compared to 3D motion capture and high intrarater reliability of 2D analysis when examining joint angles during simple movements, such as single-leg squats and running [1,5,6,7], the validity and reliability of 2D video analysis for complex skills in acrobatic sports are unclear and must be scientifically assessed before this method can be recommended for gymnastics. The validity and reliability of 2D analysis were deemed sufficient for measuring the flight time and height of vertical jumps, when compared to optical measurement systems (Opto Jump, Microgate, I) [8] or to a force plate [9]. Further, 2D analysis was deemed valid (ICC = 0.8) and reliable (ICC > 0.85) for measuring joint angles during the more complex skill of baseball pitching, as long as the camera was placed properly [1], so the possibility of it being useful in gymnastics seems worthy of investigation.
In summary, the studies mentioned above offer justification for using simple, time-saving, and cost-effective 2D analysis for simple lower-extremity movements based on good validity and reliability compared to gold-standard methods. However, in contrast to movements in previous studies, artistic gymnastics involve highly complex movements that are performed with high accelerations and velocities. Therefore, the aim of this study was to investigate criterion validity (comparison of 2D to 3D analysis) and both intrarater (test-retest) and interrater (equivalence of two assessors) reliability of 2D video analysis for the peak height (hpeak) and length of flight (L) of vaults in artistic gymnastics.

Twenty-two junior and international elite gymnasts (female: n = 5; male: n = 17) volunteered to participate in the study. All subjects gave written informed consent before participating in the study. All study procedures were approved by the ethics committee Bern (17.01.2017; Project-ID: 2016-01970) and conducted in accordance with the current version of the Declaration of Helsinki, the ICH-GCP, ISO EN 14155, and all national legal and regulatory requirements.
In total, 38 vaults were used for assessment. These included vaults from the three most important vault categories (handspring, Tsukahara, and Yurchenko) and comprised a variety of different sagittal plane rotations (tuck/double tuck, pike/double pike, and layout), which were combined with up to three turns around the longitudinal axis. These vaults were simultaneously recorded with conventional 2D video and a 3D motion capture system (Vicon Motion System, Denver, CO, USA) and analyzed to determine hpeak and L in the second flight phase.
For 2D analysis, vaults were filmed using an iPad (iPad Pro 9.7", Apple Corporation, Cupertino, CA, USA) at 100 frames/s. The lens of the iPad was placed at a height of 1.55 m and at a distance of 10 m from the vaulting table, so that the take-off, first and second flight phases, and landing were all visible. The height and width of the image were calibrated within the analytical software (Dartfish SA, Fribourg, CH) by using a rod of known length (2.78 m) that was held vertically and horizontally along the landing zone (Figure 1). With the Dartfish software, hpeak was measured as the vertical distance between the landing mat and the gymnast’s center of gravity at its highest point during the second flight phase of the vault. For this, the gymnast’s center of gravity was estimated visually in the video frame at which the maximal height was deemed to have occurred. L was determined as the horizontal distance between the ankle at the foot’s first contact with the mat upon landing and the end of the vaulting table (Figure 2). The software then automatically calculated hpeak and L by using the reference height and length.
For the 3D analysis, all vaults were captured by 14 Vicon Vantage Cameras (Vicon Motion System, Denver, CO, USA) that were arranged in two planes: eight cameras were placed at a height of 5.50 m and six were placed at a height of 1.70 m (Figure 3) above ground level. Forty-three reflective markers were placed on the gymnasts’ bodies, according to the Vicon Plug-in Gait model [10] (Figure 4). For capturing and, afterward, determining hpeak and L, Vicon Nexus, version 2.6, Vicon Motion System, Denver, CO, USA) software was used.
The 2D videos were analyzed by a first-time assessor and an experienced assessor. The first-time assessor was only briefly introduced to the relevant functions of the software (reference measurements) and the important aspects of the measurement of hpeak and L (e.g., determination of the center of gravity at the maximum height of flight) before evaluating the trials.
The parameters determined by the first-time assessor (2D1) were compared to those obtained by 3D analysis to assess criterion validity of 2D analysis (2D1 vs. 3D). Further, the parameters were determined with Dartfish (Dartfish SA, Fribourg, CH) by the same assessor at two different points in time (first measurement: 2D1; second measurement: 2D2) and by an experienced assessor (2De) to verify intrarater (2D1 vs. 2D2) and interrater reliability (2D1 vs. 2De).
Mean, standard deviation, Pearson’s correlation coefficient (r), random error (CV%), typical error (TE), and systematic error (t-test: p) of hpeak and L measurements were calculated to determine criterion validity (3D vs. 2D1) and both intrarater (2D1 vs. 2D2) and interrater reliability (2D1 vs. 2De), according to Hopkins et al. [11]. The comparison between the 3D and 2D1 measurements (criterion validity) is displayed in a Bland–Altman diagram [12]. In order to determine the influence of lateral displacement at landing on the accuracy of the 2D measurements, the relationship between the difference in L (2D–3D measurement) and displacement along the x axis (to the left or right) was calculated. The level of statistical significance was set to p < 0.05. Data analysis was conducted using Microsoft Excel spreadsheets (Microsoft Excel 2016, Microsoft Corporation, Redmond, WA, USA).

Two-dimensional analysis (2D1) showed small differences in mean compared to 3D analysis (Table 1). The ±95% limits of agreement corresponded to measurement errors of ±3.6% for hpeak and ±7.6% for L (Figure 5). Regarding the validity and reliability of 2D analysis, high correlation coefficients and minor random errors for the hpeak and L of vaults were found (Table 2). In contrast, there was a tendency for a systematic error for hpeak with 2D compared to 3D analysis. Further, we found a significant correlation between the lateral displacement (x axis) at landing and the difference in L between 2D and 3D analysis (r = 0.58; p < 0.01). The ex post facto power analysis revealed a power of ~1 for all investigated correlations. The data of all measurements in this study can be found in the supplementary material (Table S1).

This study evaluated the validity and reliability of 2D video analysis of the hpeak and L of vaults in artistic gymnastics. We conclude that 2D video analysis is a valid and reliable alternative to 3D motion capture, particularly for determining the hpeak, but slightly less so for the assessment of the L, of vaults. Thus, the ease of use and cost-effectiveness of 2D analysis, along with the results from this study, support the use of 2D analysis in routine training and scientific research. 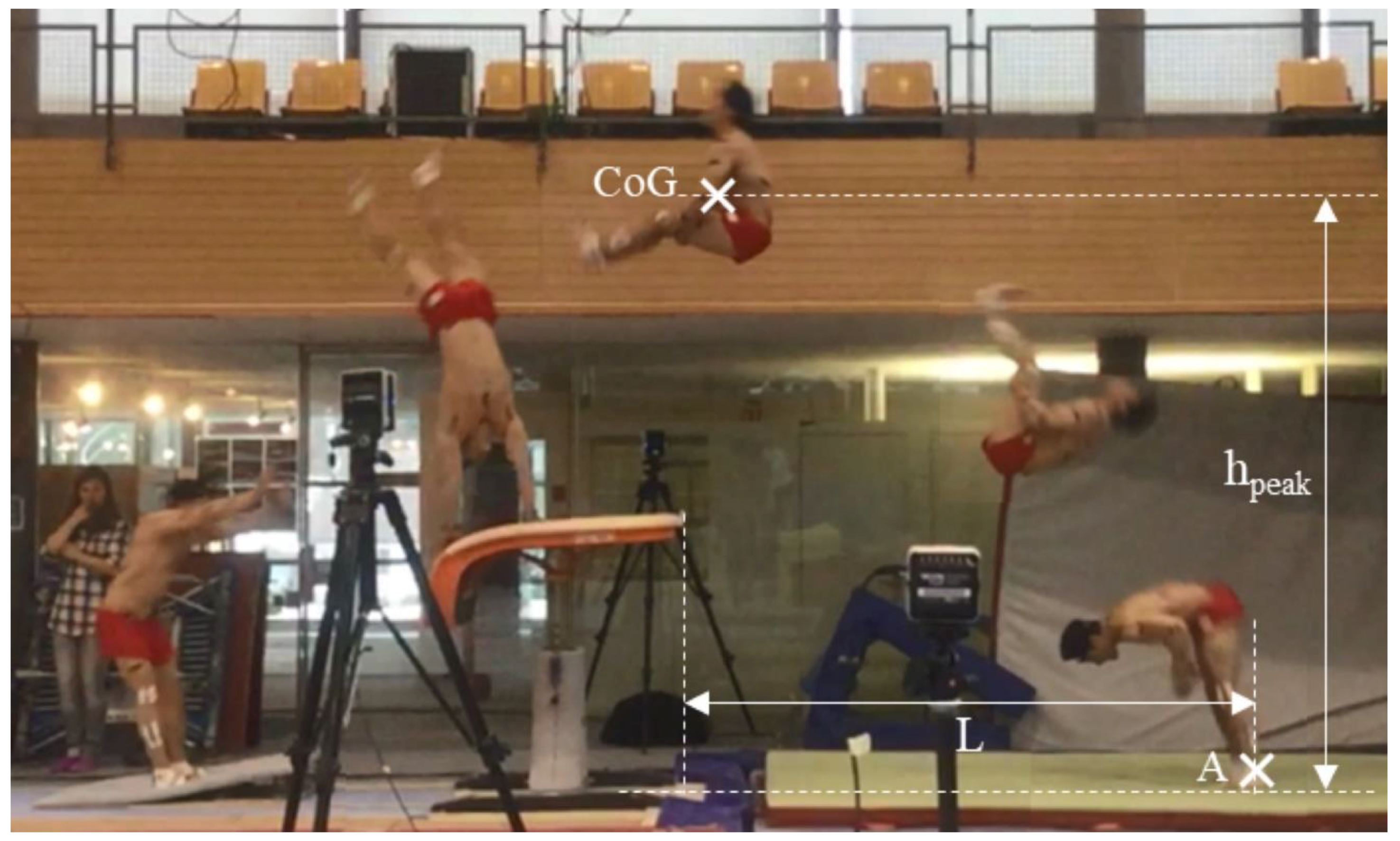 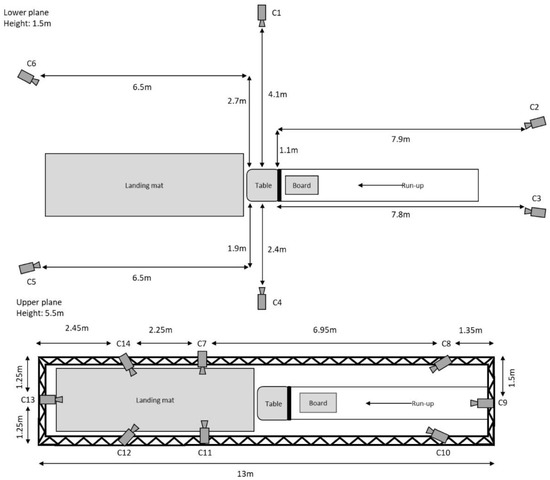 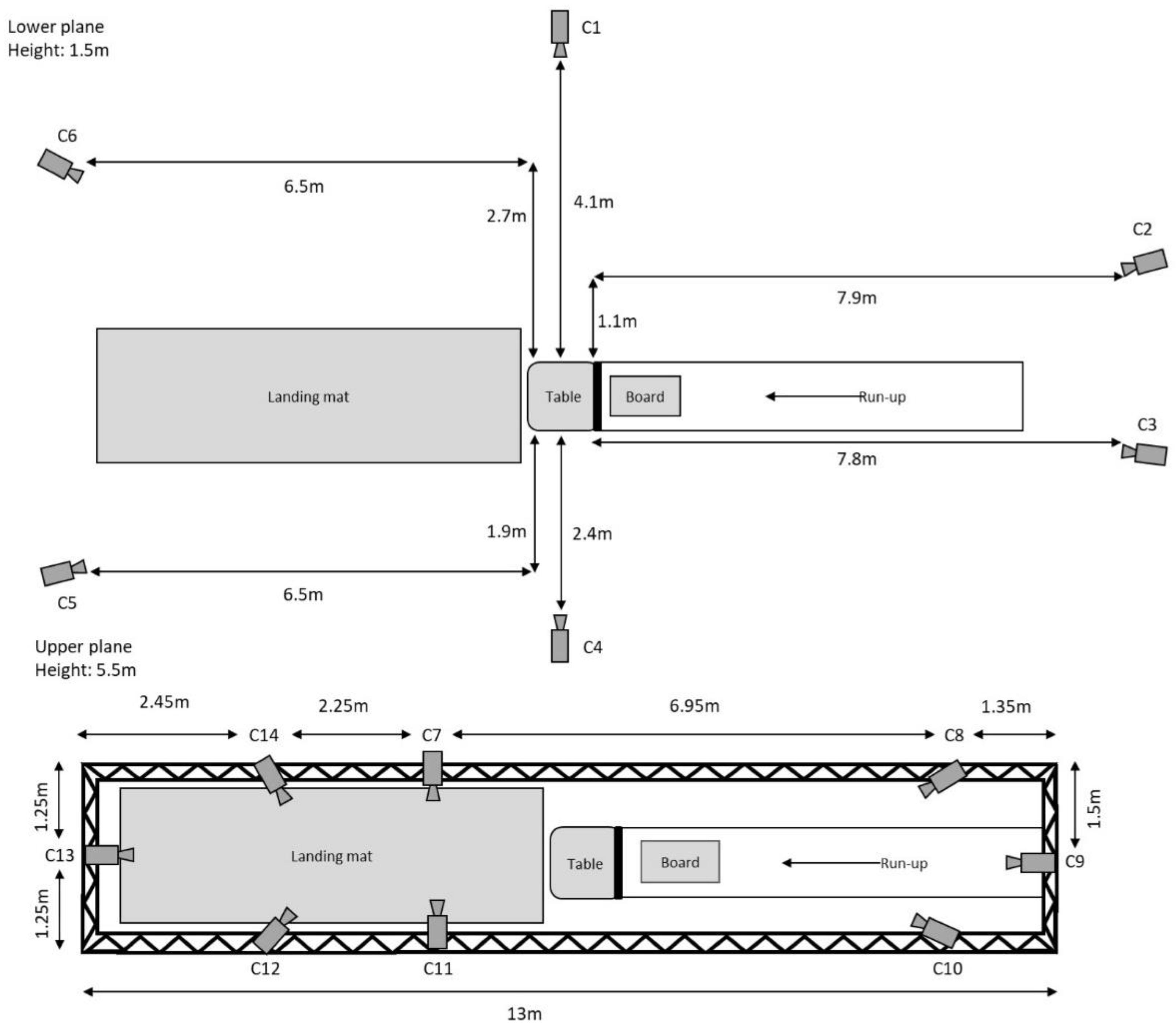 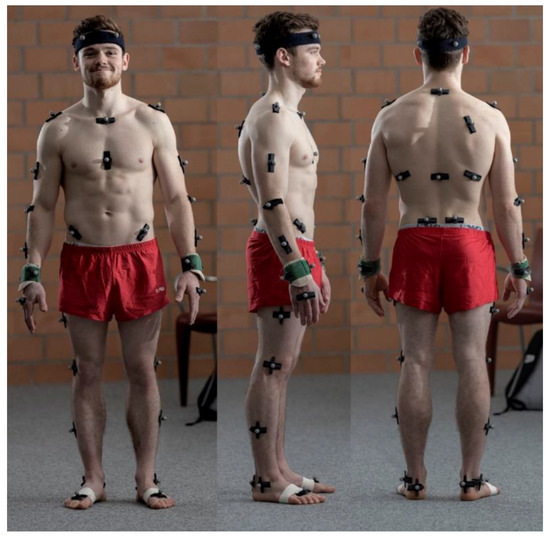 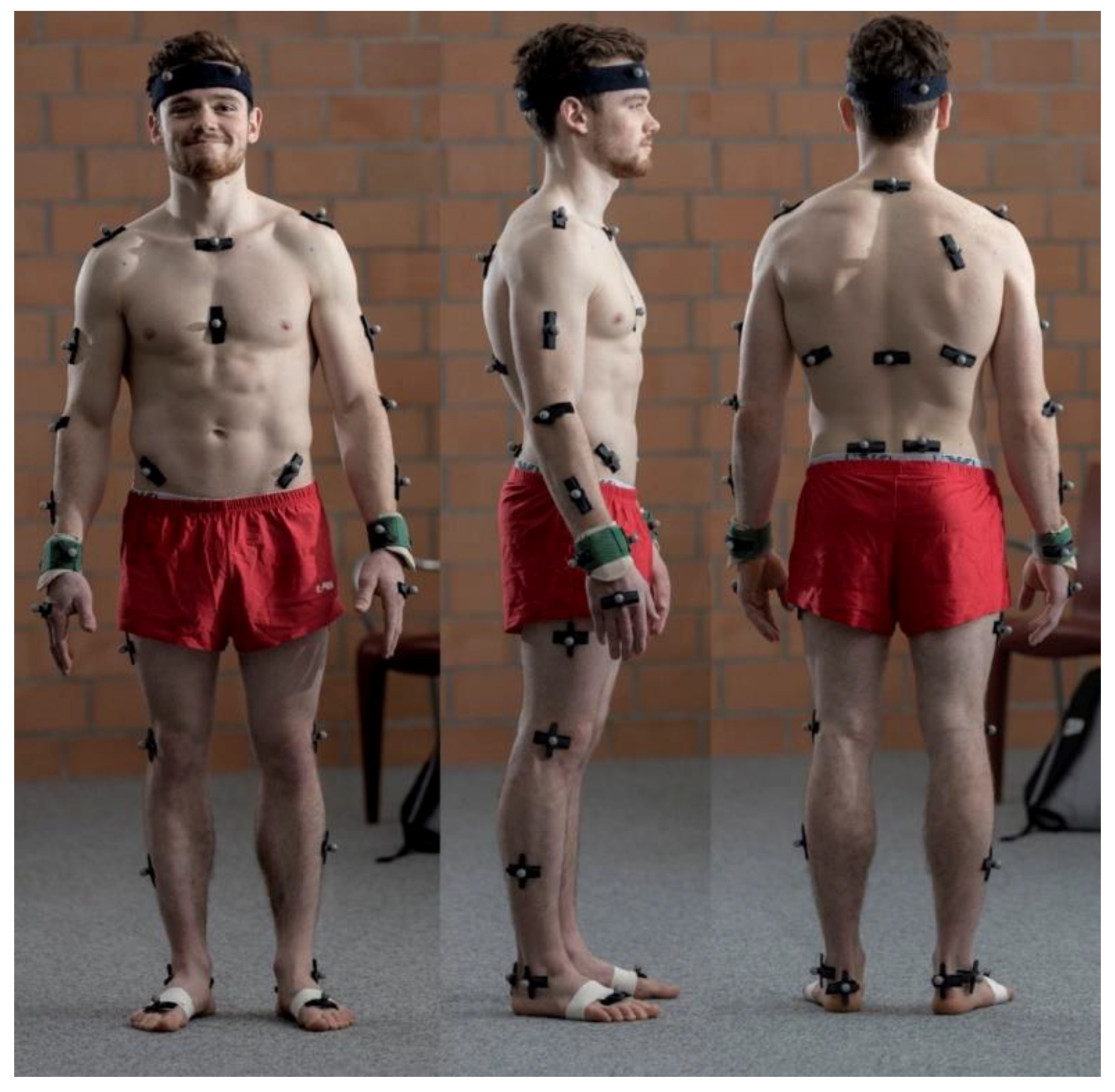