Poly(phenylene methylene)-Based Coatings for Corrosion Protection: Replacement of Additives by Use of Copolymers

Utilization of renewable energy (e.g., wind, solar, bio-energy) is high on international and governmental agendas. In order to address energy poverty and increase energy efficiency for rural villages, a hybrid distribution generation (DG) system including wind, hydrogen and fuel cells is proposed to supplement to the main grid. Wind energy is first converted into electrical energy while part of the generated electricity is used for water electrolysis to generate hydrogen for energy storage. Hydrogen is used by fuel cells to convert back to electricity when electrical energy demand peaks. An analytical model has been developed to coordinate the operation of the system involving energy conversion between mechanical, electrical and chemical forms. The proposed system is primarily designed to meet the electrical demand of a rural village in the UK where the energy storage system can balance out the discrepancy between intermittent renewable energy supplies and fluctuating energy demands so as to improve the system efficiency. Genetic Algorithm (GA) is used as an optimization strategy to determine the operational scheme for the multi-vector energy system. In the work, four case studies are carried out based on real-world measurement data. The novelty of this study lies in the GA-based optimization and operational methods for maximized wind energy utilization. This provides an alternative to battery energy storage and can be widely applied to wind-rich rural areas. View Full-Text
Keywords: CO2 emissions; fuel cells; hydrogen; multi-vector energy system; wind energy CO2 emissions; fuel cells; hydrogen; multi-vector energy system; wind energy
►▼ Show Figures 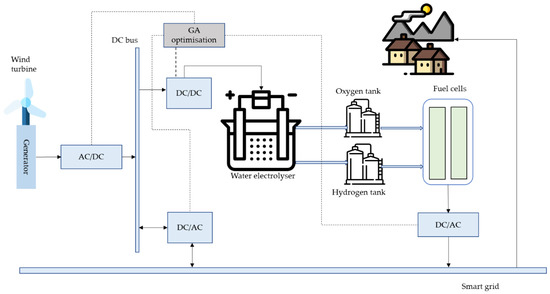