Several heat-to-power conversion technologies are being proposed as suitable for waste-heat recovery (WHR) applications, including thermoelectric generators, hot-air (e.g., Ericsson or Stirling) engines and vapour-cycle engines such as steam or organic Rankine cycle (ORC) power systems. The latter technology has demonstrated the highest efficiencies at small and intermediate scales and low to medium heat-source temperatures and is considered a suitable option for WHR in relevant applications. However, ORC systems experience variations in performance at part-load or off-design conditions, which need to be predicted accurately by empirical or physics-based models if one is to assess accurately the techno-economic potential of such ORC-WHR solutions. This paper presents results from an experimental investigation of the part-load performance of a 1-kWe ORC engine, operated with R245fa as a working fluid, with the aim of producing high-fidelity steady-state and transient data relating to the operational performance of this system. The experimental apparatus is composed of a rotary-vane pump, brazed-plate evaporator and condenser units and a scroll expander magnetically coupled to a generator with an adjustable resistive load. An electric heater is used to provide a hot oil-stream to the evaporator, supplied at three different temperatures in the current study: 100, 120 and 140 C. The optimal operating conditions, that is, pump speed and expander load, are determined at various heat-source conditions, thus resulting in a total of 124 steady-state data points used to analyse the part-load performance of the engine. A maximum thermal efficiency of 4.2 ± 0.1% is reported for a heat-source temperature of 120 C, while a maximum net power output of 508 ± 2 W is obtained for a heat-source temperature at 140 C. For a 100-C heat source, a maximum exergy efficiency of 18.7 ± 0.3% is achieved. A detailed exergy analysis allows us to quantify the contribution of each component to the overall exergy destruction. The share of the evaporator, condenser and expander components are all significant for the three heat-source conditions, while the exergy destroyed in the pump is negligible by comparison (below 4%). The data can be used for the development and validation of advanced models capable of steady-state part-load and off-design performance predictions, as well as predictions of the transient/dynamic operation of ORC systems. View Full-Text
Keywords: exergy analysis; experiment; low temperature; organic Rankine cycle; ORC; small scale exergy analysis; experiment; low temperature; organic Rankine cycle; ORC; small scale
►▼ Show Figures 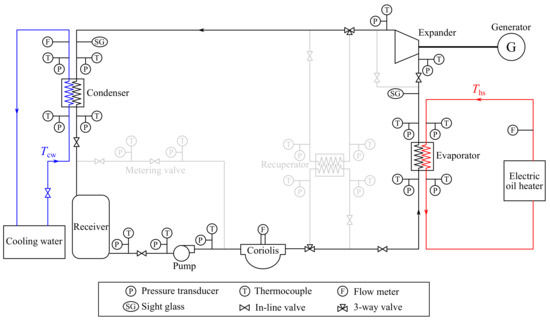