Application of Nitrogen and Oxygen Isotopes for Source and Fate Identification of Nitrate Pollution in Surface Water: A Review
Previous Article in Journal

The proposed method is applicable for surface-wave extraction on X component in multicomponent seismic exploration. This method has application potential for the separation of PS-waves and surface waves whose frequencies and velocities are close.

High-resolution LRT is used to image surface-wave dispersive energy [10]. Using this, surface waves and reflections on Z components are present clearly in different locations of the f-v domain when their frequencies and velocities are significantly different. Hu et al. [19] extract surface waves from Z components by a 2D window of the f-v domain.
The frequency-domain inverse LRT in the matrix-vector form is [18]: where is a vector of size representing the Fourier coefficients of the seismic data at the given frequency , while is a vector of size representing the Fourier coefficients of the Radon panel at the given frequency . In Equation (1), is a complex matrix of size : where is the apparent velocity and is the offset.
The frequency-domain high-resolution forward LRT [20,21] is inverted with a sparse constraint of a priori probability, known as: where . is a matrix of data weights, specifically, a diagonal matrix showing the standard deviation, , while is a diagonal matrix of Radon coefficients indicating how sparse the coefficients are, . is the identity matrix, and the scalar is the tradeoff parameter that weights the relative levels of importance of the misfit and the sparsity [22].
However, it is difficult to extract surface waves correctly from X-component seismic data, because the frequencies and velocities of higher-mode surface waves and PS-waves are close and both of them are generally evident on X components. Disturbed by PS-waves, the dispersive energy is not true for surface waves. So, extracting surface waves in the f-v domain is not a perfect method. We propose a method of surface-wave extraction based on MCA to avoid the overlaps between surface waves and reflections in the f-v domain. High-resolution LRT is one of two transforms and is used to represent surface waves.

3. New Method: Sparse Representations of Wavefields Based on MCA

To sparsely represent surface waves, Equation (3) is solved to achieve high-resolution LRT in the spectral bandwidth of surface waves by the iteratively reweighted least squares (IRLS) algorithm [27]. The interval of apparent velocities should be small to avoid aliasing for reconstruction; moreover, the apparent-velocity range includes the phase velocities of surface waves.

Inverse and adjoint HRT in the discrete form can be expressed as [21]: and where are the seismic data in the time-offset domain, is the offset, is two-way time, are the Radon coefficients, is the root-mean-square velocity of a reflection, is the time intercept, and are the low-resolution Radon coefficients. Equations (7) and (8) are represented in matrix-vector form as follows [28]: where is a vector of size , whose elements are taken trace-wise from the seismic data (), and is a vector of size , whose elements are taken velocity-wise from the Radon coefficients (). , , , and are the numbers of traces, samples, velocities, and time intercepts, respectively. In Equations (9) and (10), the operators and are just represented for the summation algorithms shown in Equations (7) and (8), instead of matrices [28].
High-resolution forward HRT can be inverted from Equation (9) using a sparse constraint satisfying which is solved by the algorithm of a left preconditioned version of conjugate gradient for the normal Equations [28].
The computational cost of applying operators and is controlled by the size of the Radon domain [29]. To speed up the implementation, time-domain high-resolution forward HRT is solved in the restricted Radon space [29] where should be normalized to unity by dividing the maximum of the seismic data [30]. The restricted Radon space is defined as where is the threshold satisfying .

4.1.2. Recovery of the Surface-Wave Dispersive Energy

The advantage of our method over other methods of surface-wave extraction is clear for X-component seismic data, while it is not obvious for Z components. The surface-wave dispersive energy on Z components is not severely influenced by the reflections because surface waves and reflections are clearly in different locations of the f-v domain [19]. In addition, fundamental-mode surface waves are dominant in Z components.
Satisfactory results can be obtained by the proposed method when velocities change slowly along the horizontal direction and reflection interfaces are almost horizontal. However, the method is not applicable for seismic data with strong diffractions, which affect the sparse representations of surface waves and reflections.
To broaden the method for wavefields with diffractions, we can add another dictionary or transform that can only sparsely represent diffractions. The apex-shifted hyperbolic Radon transform has been used to separate the diffractions from reflections [33]. So, we will use this Radon transform to represent diffractions in future research.

We thank Jianjun Gao and Chunying Yang for their suggestions on the Radon transform and its application to extraction of dispersion curves. We also appreciate the anonymous reviewers for their constructive comments and suggestions. 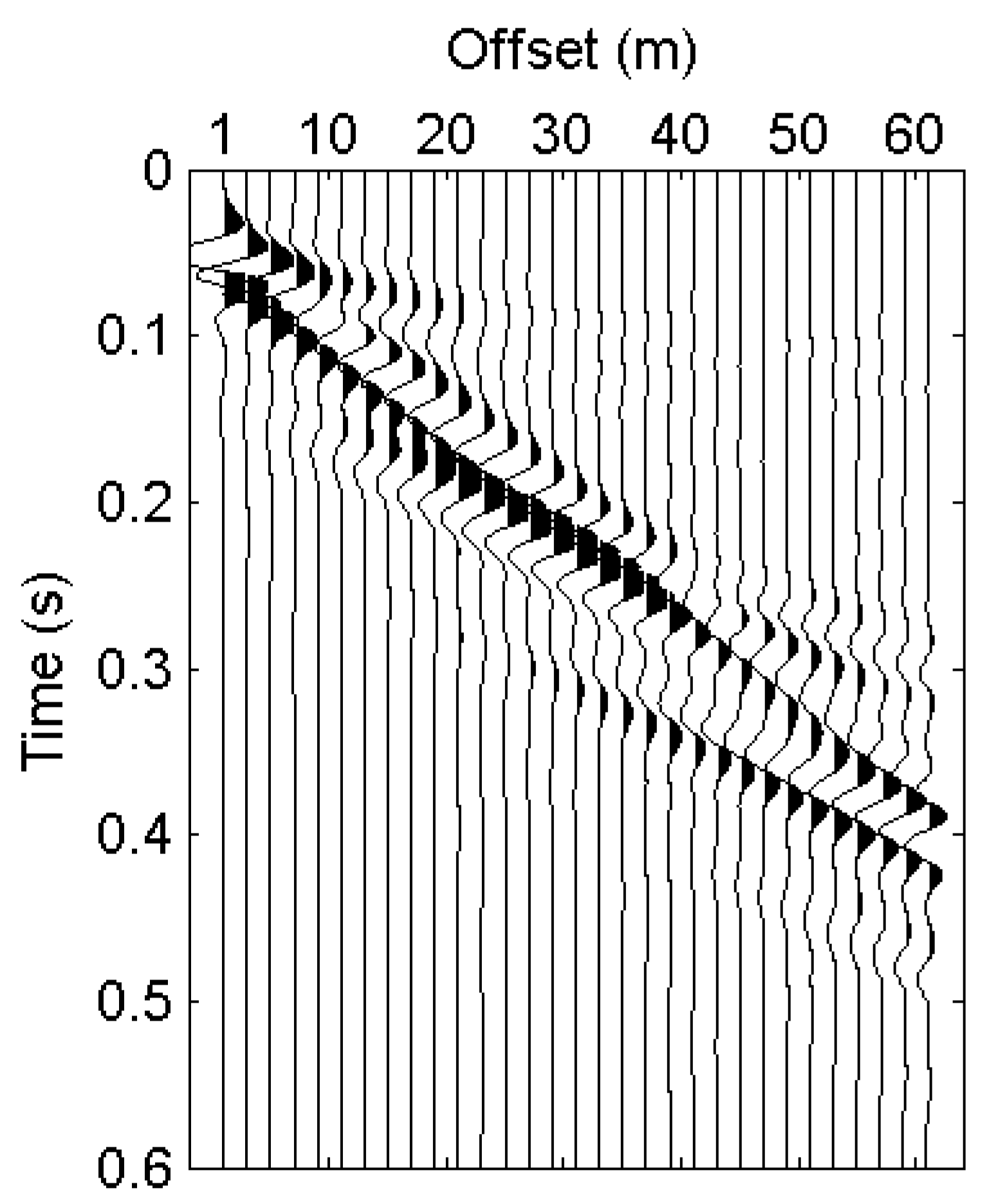 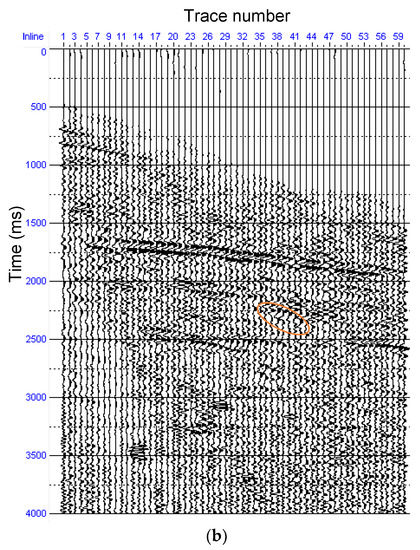 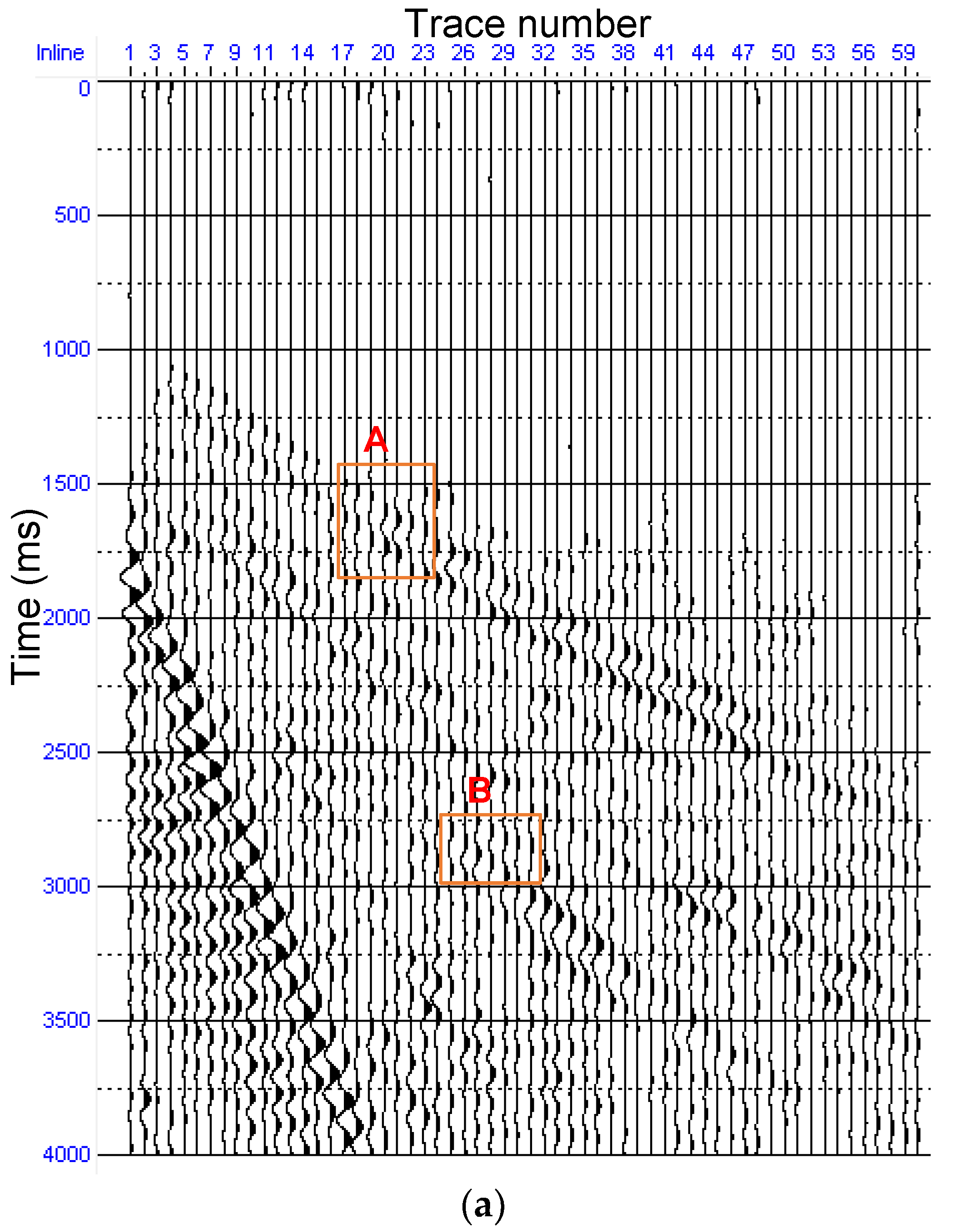 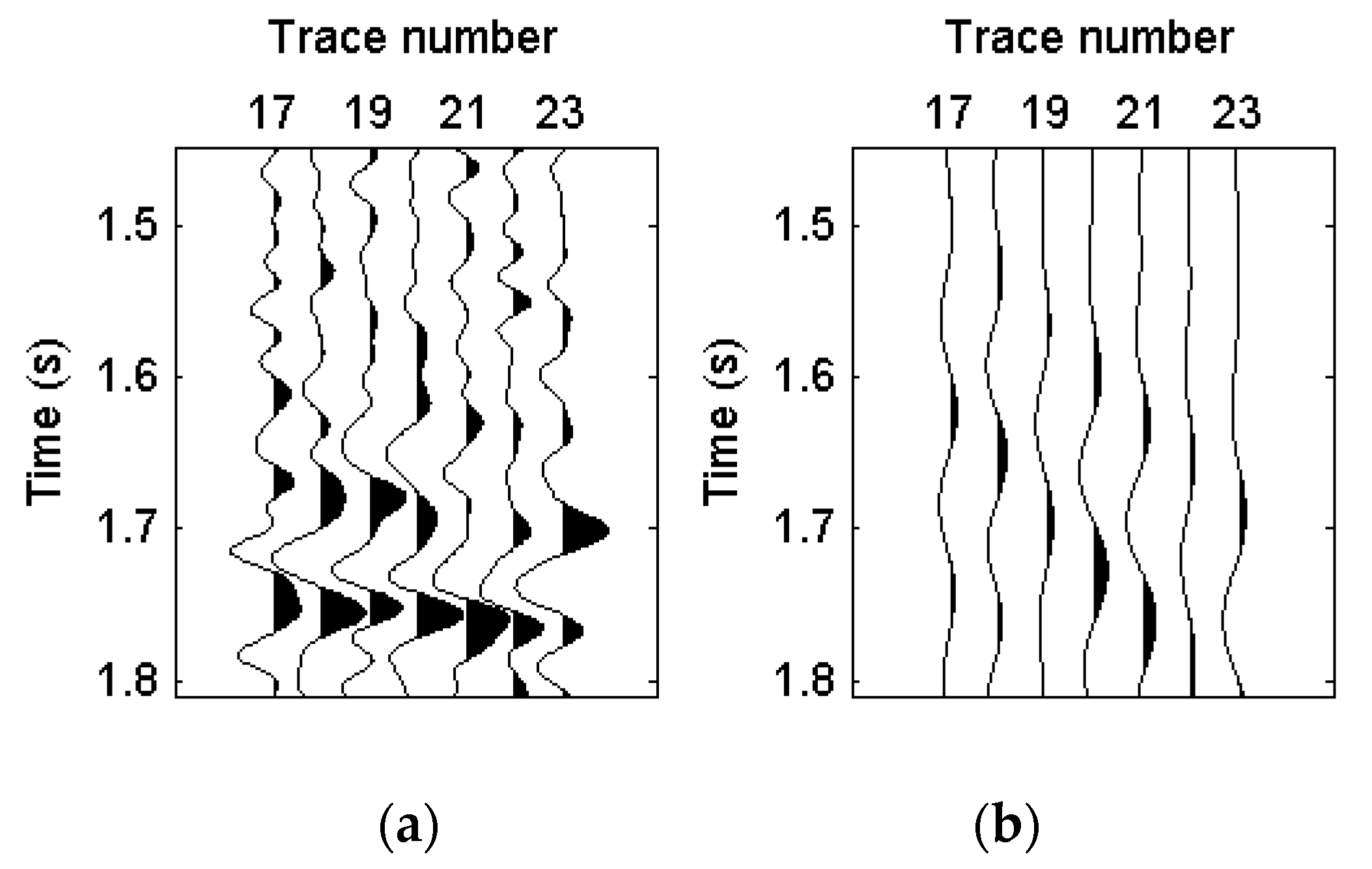 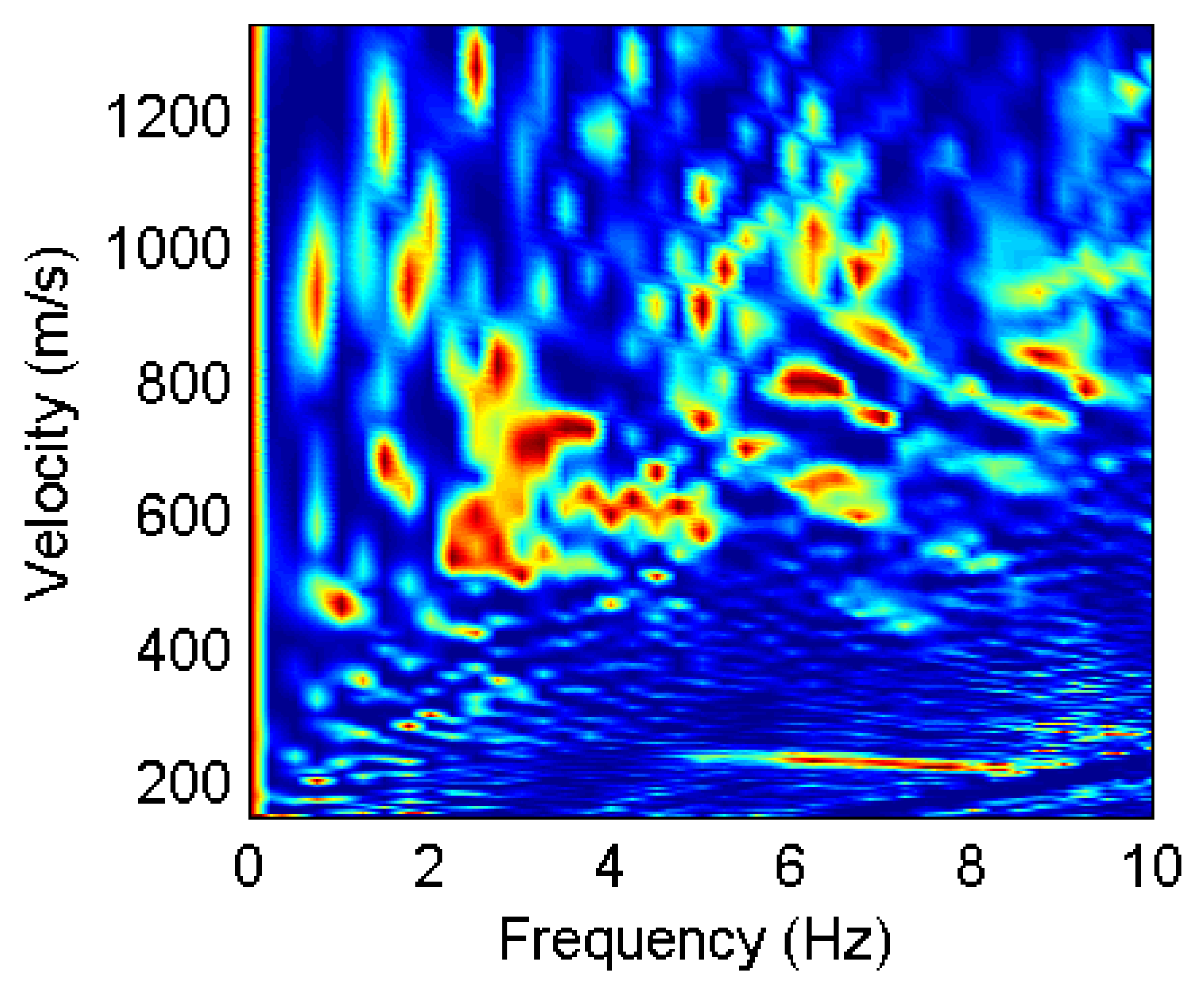