Blockchain: A Tale of Two Applications
Previous Article in Journal

Due to the development of high-throughput DNA sequencing technology, genome-sequencing costs have been significantly reduced, which has led to a number of revolutionary advances in the genetics industry. However, the problem is that compared to the decrease in time and cost needed for DNA sequencing, the management of such large volumes of data is still an issue. Therefore, this research proposes Blockchain Applied FASTQ and FASTA Lossless Compression (BAQALC), a lossless compression algorithm that allows for the efficient transmission and storage of the immense amounts of DNA sequence data that are being generated by Next Generation Sequencing (NGS). Also, security and reliability issues exist in public sequence databases. For methods, compression ratio comparisons were determined for genetic biomarkers corresponding to the five diseases with the highest mortality rates according to the World Health Organization. The results showed an average compression ratio of approximately 12 for all the genetic datasets used. BAQALC performed especially well for lung cancer genetic markers, with a compression ratio of 17.02. BAQALC performed not only comparatively higher than widely used compression algorithms, but also higher than algorithms described in previously published research. The proposed solution is envisioned to contribute to providing an efficient and secure transmission and storage platform for next-generation medical informatics based on smart devices for both researchers and healthcare users. View Full-Text
Keywords: blockchain; DNA sequence; lossless compression; medical informatics blockchain; DNA sequence; lossless compression; medical informatics
►▼ Show Figures 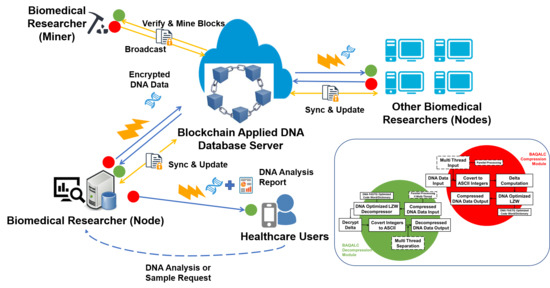