The kinetic coefficient of friction μk was measured for sea ice, stainless steel, and coated steel sliding on a natural sea ice cover. The effects of normal stress (3.10–8.11 kPa), ice columnar grain orientation (vertical and parallel to the sliding direction), sliding velocity (0.02–2.97 m·s–1), and contact material were investigated. Air temperature was higher than −5.0 °C for the test duration. The results showed a decline of μk with increasing normal stress with μk independent of ice grain orientation. The μk of different materials varied, partly due to distinct surface roughnesses, but all cases showed a similar increasing trend with increasing velocity because of the viscous resistance of melt-water film. The velocity dependence of μk was quantified using the rate- and state- dependent model, and μk was found to increase logarithmically with increasing velocity. In addition, μk obtained at higher air temperatures was greater than at lower temperatures. The stick-slip phenomenon was observed at a relatively high velocity compared with previous studies, which was partly due to the low-stiffness device used in the field. Based on the experimental data, the calculation of physical models can be compared. View Full-Text
Keywords: sea ice; kinetic friction coefficient; in situ test; sliding velocity; ice navigation sea ice; kinetic friction coefficient; in situ test; sliding velocity; ice navigation
►▼ Show Figures 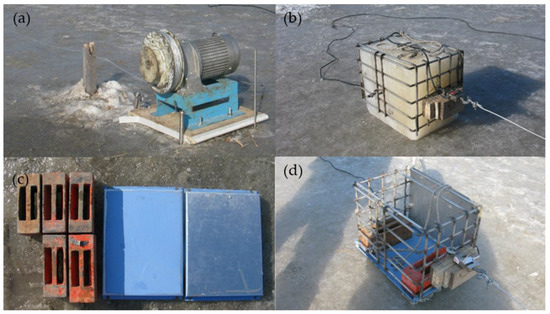