Medicinal plants have been used, since the Hippocrates era, for healing a wide range of diseases including infectious, systematic and inflammatory diseases [1,2]. In contrast the current antimicrobial drugs are used for the treatment of human and animal infections for just less than a century now [3,4,5]. In addition, the development of drug-resistant pathogens appeared quickly, while the emergence of multi-drug resistant strains has increased exponentially during the recent years [6].
Methicillin-resistant Staphylococcus aureus (MRSA), vancomycin-resistant enterococci (VRE), Streptococcus pneumoniae, Mycobacterium tuberculosis, Enterobacteriaceae producing extended spectrum b-lactamases (ESBLs) and carbapenemases, multidrug-resistant isolates causing severe hospital infections in immunocompromised individuals such as Pseudomonas aeruginosa and Acinetobacter baumannii are increasingly reported from both the human and veterinary medicine practice and the aquatic environment as well [4,7,8,9,10,11,12,13,14].
With the emergence of drug resistance and the shortage of effective therapeutics to treat infectious diseases, medicinal plants attracted the attention of researchers looking for new compounds with potent antimicrobial activity. Recent studies suggest plant-essential oils to be associated with sufficient antimicrobial properties against several foodborne pathogens, indicating good prospective for use in food preservation [15,16,17,18,19,20,21]. Moreover, there are published data on their use in farm animals for prophylaxis from infectious diseases and as safer substitutes for the antibiotics used for growth promotion [22,23,24,25,26].
Among the actions targeting to reduce and solve the drug-resistance problem is the search for novel antibiotic substances; hence essential oils and their compounds appear to be encouraging replacements. However, most of the published research in this field concerns either reference bacterial strains or non-pathogenic bacteria. Even though there are a few papers concerning clinical isolates [27,28,29,30,31], there is limited information on the essential oils’ effect on drug-resistant strains [32,33,34,35]. The goal of the present study was to explore the antibacterial effectiveness against multi-drug resistant Gram-positive bacteria isolated from waste water treatment plants and clinical specimens, of five essential oils, which though being widely used in previously conducted studies, their effectiveness against drug-resistant strains is barely addressed in the relevant bibliography.

Broth macrodilution assays were performed to determine the Minimal Inhibitory Concentration (MIC) and the Minimal Bactericidal Concentration (MBC) for the essential oils according to the CLSI protocol [36] with minor modifications as previously described [35]. Two-fold serial dilutions of each oil were prepared in Mueller-Hinton broth (MHB, Oxoid Ltd., Basingstoke, UK), with a concentration range of 4% (v/v) to 0.016% (v/v). Tween 20 (Thermo Fisher Scientific, Waltham, MA, USA) was used as a solubilizer at a concentration of 0.5% (v/v). Bacterial inoculum measured by DEN-1 densitometer (Grant Ltd., Cambridgeshire, UK) at a turbidity of 0.5 McFarland (1–1.5 × 108 cfu/mL), was transferred into MHB to obtain a bacterial count of 5 × 105 cfu/mL. After a 24 h incubation at 37 °C aerobically, an appropriate amount of 10 μL was plated onto Mueller-Hinton agar (MHA, Oxoid Ltd., Basingstoke, UK) and incubated under the aforementioned conditions. Viable counts method was used for determination of MIC and MBC values. The MIC is defined as the lowest concentration of an antimicrobial agent that prevents visible growth of a microorganism in an agar or broth dilution susceptibility test. The MBC is identified by determining the lowest concentration of antibacterial agent that reduces the viability of the initial bacterial inoculum by a pre-determined reduction such as ≥99.9% [37,38,39].
Time-kill kinetics were performed by exposing the tested microorganisms to the two-fold serial concentrations of each essential oil, ranging from 0.063% to 4% (v/v) and assessed by viable counts procedure [39]. At 0, 1, 3, 6, 8, 12, 24 and 48 h of the dilutions’ incubation, 10-μL amount of each tube was plated onto duplicate plates of MHA and after 24 h of incubation at 37 °C, plates were checked for visible bacterial growth. Experiments were performed in triplicate and viable counts (cfu/mL) plotted in logarithmic phase in relation to time.

The antimicrobial susceptibility of the tested isolates is presented in Table 2. Both MRSA and VRE were identified as multidrug-resistant (resistance to 3 or more antibiotics classes tested).
MIC values of selected essential oils against MRSA, VRE and ATCC strains are presented in Figure 1. Origanum, thyme, tea tree and basil oils demonstrated antibacterial activity, while MIC values were higher on the wild MRSA isolates than on the reference strains S. aureus ATCC 29213, S. aureus ATCC 43300 and S. epidermidis ATCC 12228 as well. In general, chamomile oil demonstrated no antibacterial action. The only exception was one sensitive MRSA strain in which both low bacteriostatic (MIC = 2% v/v) and bactericidal (MBC = 2% v/v) efficacy was occurred (Figure 1Α). Origanum, thyme, and tea tree oils demonstrated great antimicrobial activity against enterococci, while basil and chamomile oils presented weak and no antimicrobial properties, respectively (Figure 1Β).
The range of MIC and MBC values of the tested essential oils against the selected isolates are presented in Table 3. The mean values of the MICs ± SD (% v/v) reported for MRSA were 0.25 ± 0.14 for origanum oil, 0.41 ± 0.27 for thyme oil, 0.56 ± 0.30 for tea tree oil, and 1.42 ± 1.43 for basil oil. Regarding enterococci, origanum oil demonstrated the most significant antimicrobial activity (0.58 ± 0.28), followed by thyme oil (1.22 ± 0.60) and tea tree oil (2 ± 1.22).
In Figure 2 and Figure 3 the time-kill assays of each essential oil at concentrations ranging from 0.125% up to 4% (v/v) against two of the tested clinical isolates (one VRE and one MRSA) are presented. In these two assays, in contrast to the majority of the tested bacteria, the presented VRE isolate (VRE no. 2) exhibited bactericidal response to tea tree and thyme oils at 1% (v/v) and 0.5% (v/v) concentrations respectively at 48 h, while the total reduction of viable cells was achieved at higher concentrations at 24 h (Figure 2). However, the activity of the afore-mentioned oils was reduced at 48 h on three clinical MRSA isolates and the bactericidal values were one dilution higher than the displayed values at 24 h. Figure 3 presents an example of one clinical MRSA strain (MRSA no. 4) isolated from wound swab, which demonstrated bactericidal response at 1% (v/v) and 2% (v/v) to tea tree oil and at 0.12% (v/v) and 0.25% (v/v) to thyme oil, after 24 h and 48 h of incubation, respectively.

This research was financially supported by the HERAKLEITOS Project 61/1733/7, funded by the EPEAEK Administration Office of the Greek Ministry of Education. 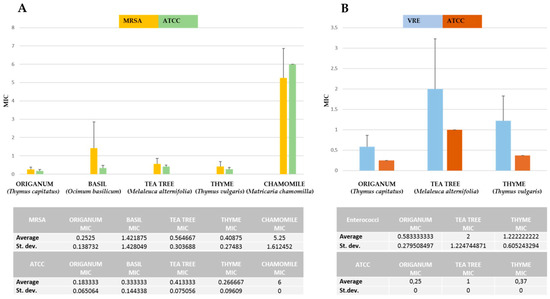 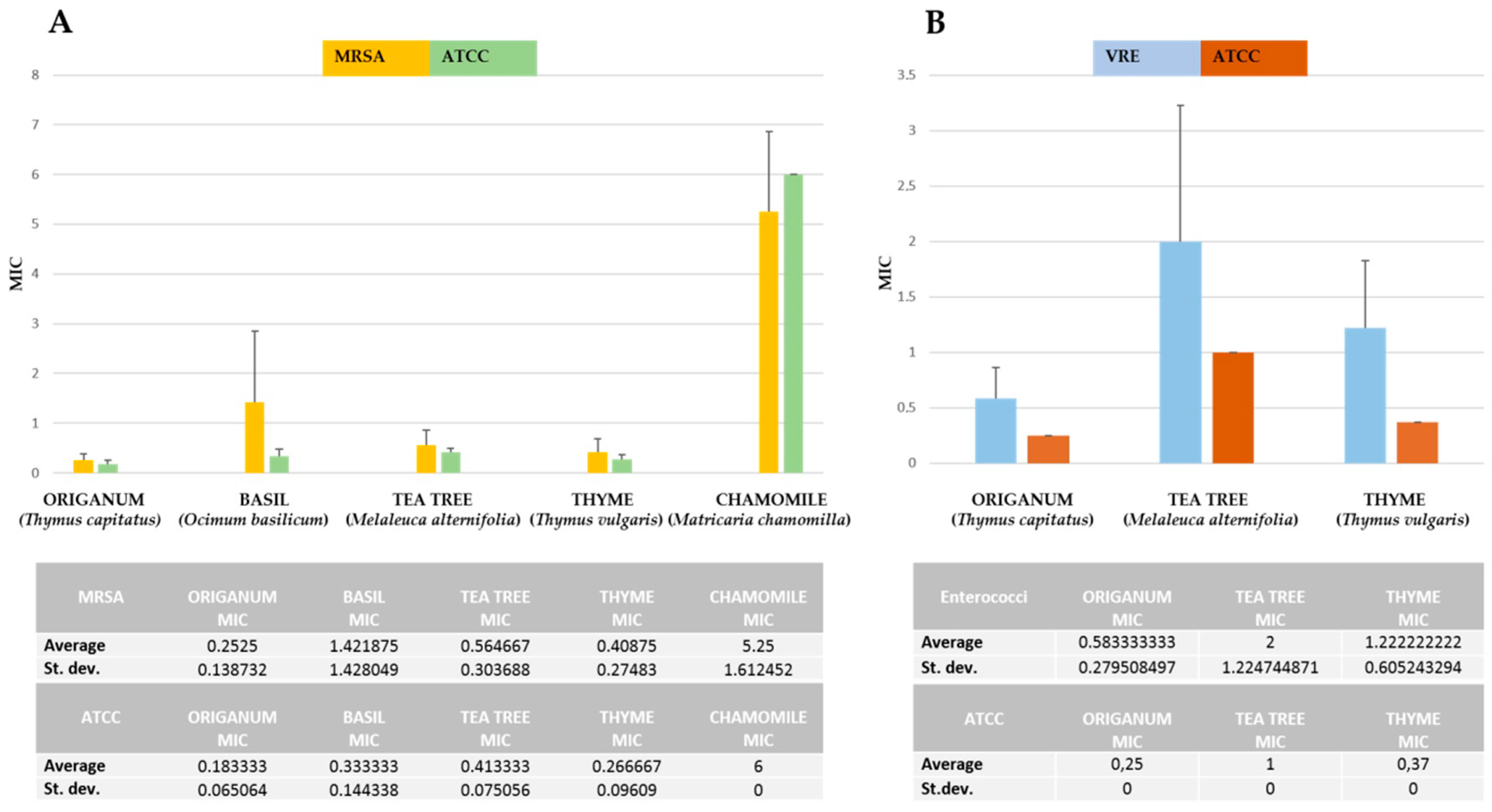