The issue of detecting objects bottoming on the sea floor is significant in various fields including civilian and military areas. The objective of this study is to investigate the logistic regression model to discriminate the target from the clutter and to verify the possibility of applying the model trained by the simulated data generated by the mathematical model to the real experimental data because it is not easy to obtain sufficient data in the underwater field. In the first stage of this study, when the clutter signal energy is so strong that the detection of a target is difficult, the logistic regression model is employed to distinguish the strong clutter signal and the target signal. Previous studies have found that if the clutter energy is larger, false detection occurs even for the various existing detection schemes. For this reason, the discrete Fourier transform (DFT) magnitude spectrum of acoustic signals received by active sonar is applied to train the model to distinguish whether the received signal contains a target signal or not. The goodness of fit of the model is verified in terms of receiver operation characteristic (ROC), area under ROC curve (AUC), and classification table. The detection performance of the proposed model is evaluated in terms of detection rate according to target to clutter ratio (TCR). Furthermore, the real experimental data are employed to test the proposed approach. When using the experimental data to test the model, the logistic regression model is trained by the simulated data that are generated based on the mathematical model for the backscattering of the cylindrical object. The mathematical model is developed according to the size of the cylinder used in the experiment. Since the information on the experimental environment including the sound speed, the sediment type and such is not available, once simulated data are generated under various conditions, valid simulated data are selected using 70% of the experiment cylinder data. The selected simulated data are used to train the model. Randomly selected experiment cylinder data, which are 70% of the total experimental cylinder data, and the rock measurement data are used to test the model. This process is repeatedly carried out 1000 times. The results show that the proposed method is effective under the circumstance where experimental data are not sufficient and a mathematical model is available for a target. View Full-Text
Keywords: target detection; logistic regression model; active sonar; shallow water target detection; logistic regression model; active sonar; shallow water
►▼ Show Figures 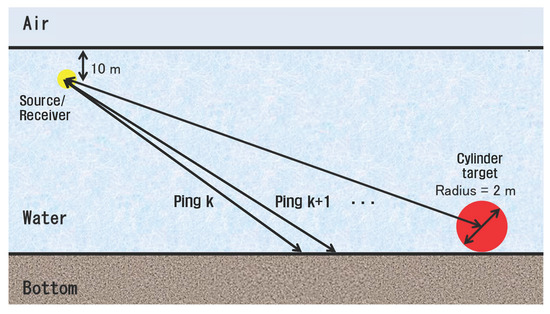