Monitoring Sound Levels and Soundscape Quality in the Living Rooms of Nursing Homes: A Case Study in Flanders (Belgium)
Previous Article in Journal

Lately, asynchronous based on discrete-event sampled-data driven systems have extensively been applied to a huge number of engineering applications, specially in networked control systems; to name a few, see [1,2,3,4,5,6,7]. Basically, in sampled-data control algorithms, continuous-time systems are controlled by discrete-time controllers implemented in digital devices [8,9,10]. In asynchronous sampled-data systems, the sampled-rate to obtain discrete-time data from the measurable out signals given by the process is automatically governed by monitoring the occurrence of a event [1,2,11,12,13,14,15,16]. Hence, the sampling rate is auto generated according to the process demand and the stated control objective instead of imposing a homogeneous sampling-time pace. Therefore, an overload of the digital controlled systems is avoided; and it also helps, in digital networked controlled systems, to be robust under packet losses and bandwidth limitation of the communication channel, among others benefits.
To generate a non-uniform-sampled data mechanism, one key idea is to stick to a given sampling-moment as long as a normed criterion comparison is outside a programmed bounded set around the studied equilibrium point of the closed-loop system. For instance, in [4], the switching mechanism is activated as long as the plan state is outside a given bounded normed set. Then, and because of the sampled-data, Input-to-State stability is assured by using Lyapunov’s theory. Motivated by this idea, we propose a switching mechanism based on the normed comparison between the continuous-time control signal and its generated discrete-time control algorithm. Lyapunov’s theory is used to support our finding.
On the other side, actuator faults occurrence may cause fatal behavior of the closed-loop system; see, for instance, [17,18,19]. Moreover, and to increase the reliability and safety of sophisticate controlled systems, the design of actuator fault robust control and fault detection systems are an important challenger [1,18,19]. Motivated by the event-driven control design of self sampled-data design philosophy, and by employing our own design, the main objective of this paper is to grant an auto-sampling event-driven robust control design against actuator failures and a fault detection invention system applied to mechanical systems. Hence, our contribution is twofold. Fist, a new auto-generated non-uniform sampled-data mechanism is stated. Second, we grant an event-triggered control law with actuator failure observation and compensation. Our algorithm is then supported by employing Lyapunov’s theory. As an application example, for the mechanical part, we use the undamped torsional pendulum because it is unstable in the Lyapunov’s sense, and it is a nonlinear system too. Moreover, this system has been used in electrical science, biophysics, petrology, and so on [20]. According to our numerical experiments, our design is able to detect a failure in the actuator device and it can stabilize the undamped torsional pendulum system presenting better performance in comparison to its open-loop deployment.
The rest of this paper is structured as follows. Section 2 is spared into two subsections. The first one gives an actuator fault observer design based on the lineal model of the nonlinear plant. This is realized by using Lyapunov’s theory. The second one states the self sampled-data control design by using the obtained actuator fault observer and then by proposing an autonomous asynchronous sampling rule. Lyapunov’s theory is also employed to support our finding. Section 3 tests our design applied to the stabilization problem to an undamped torsional pendulum. According to numerical experiment results, our design presents an acceptable performance. On the other hand, some remarks are given in the Conclusion’s section. Finally, when there is no confusion, we write, for instance, as x (This comfort writing style is also employed in [6].).

Consider the following nonlinear system with actuator failure [17]: where is the system state vector, , (Without lost of generality; here, we consider a single input system.). is the modeled additive actuator failure. Moreover, it is assumed that and are locally Lipschitz and differentiable functions in their arguments with . Finally, it is also assumed that [17].

From the linear model to the system (1): conceive the next auxiliary dynamic system: where . Then, by defining and by using (2) and (3), we obtain
Just to construct an actuator fault estimation system, let us temporally assume that is constant. Hence, and by invoking the next Lyapunov function we get
Then, by setting we force
The above means that all time signals involved in (6) are bounded. Hence, in resume, we have the next result (this result is similar to the ones obtained in [17,19]).
Theorem 1.
Given the nonlinear system (1) and its linear model (2); an actuator fault observer is granted by (3), (4), and (8) being an estimation of . Moreover, the signal is bounded on time too.

The main objective of this sub-section is to complement the stated actuator fault observer design granted in Theorem 1 by using a discrete-time event-triggered rule. To begin with, let us assume that there exists a constant gain matrix K such that the state feedback control law the system is a Hurwitz matrix; i.e., the closed-loop system , its origin equilibrium point is exponentially stable. Therefore, the system is assumed controllable too.
Going further, let us invoke the discrete-time version of (10): where is the sampled of at , and the sequence is an increasing one. The sampled-data control means that the value of is hold, by employing Zero-Order-Hold (ZOH) devices (for instance, Microchip Technology Inc., Chandler, AZ, USA) embedded in the digital controller (for instance, Microchip Technology Inc., Chandler, AZ, USA) , until the next event happens at . Then, the event-triggered control signal design consists of finding a sampling-rule to grant the next sample-time . In our approach, we first consider:
From the above equation, the sampled-data closed-loop system yields:
And because K is designed such that the system is a Hurwitz matrix, the above system is then Input-to-State Stable in the Lyapunov’s sense. Moreover, if is a bounded term, then the above dynamic will be a BIBO-stable system. So, from (13), it is clear that an option to design a triggered sampling rule is by employing the internal signal given by:
Based on the previous evidences, next is our main result.
Theorem 2.
Given the linear model (2) to the nonlinear system (1), the next dynamic system locally stabilizes its origin equilibrium point by using self-triggered sampled-data information:where K is selected such that is a Hurwitz matrix, and by using the next sampling-rate rulefor some user given small positive constant δ.
Remark 1.
To observe, the controller in Theorem 2 is a non-uniform sampled-data system whereas the faulty estimation signal is expressed in continuous-time domain (See Figure 1). But, obviously, this signal can be translate into a discrete-time domain if preferable for digital-monitoring propose.

To show the performance of our control design stated in Theorem 2, consider the undamped torsional pendulum described in Figure 2, where its motion dynamic is described by the following system: where Kg, m, kg·m, m/s being the gravitational acceleration [17]; and and are the angular and angular velocity of the system state. To go on, we use the next actuator failure model [17]:
The next internal control law satisfies the Theorem 1 assumptions: where ; and hence, the linear model around the origin equilibrium point of the system (19) yields (the un-faulty case) :
To complete our design by following Theorem 2 demand, we employ:, and . The used initial conditions are , , and the rest ones are set to zero. Then, the obtained controller is applied to the nonlinear system (19) and (20). The numerical experiment results are shown in Figure 3, Figure 4, Figure 5, Figure 6, Figure 7 and Figure 8. The last two ones correspond to the noisy case when the measurable data are corrupted by a normal Gaussian noise with mean zero and variance . From these figures, we may appreciate an acceptable performance of our self-sampled-data control algorithm design in comparison to the unstable, in the Lyapunov’s sense, response case. Lastly, to evidence the un-uniform sampling-rate for sampled-data generation, Figure 9 shows the sampling-instants for the noisy case.
Finally, and from the modeling point of view, a sample-and-hold device can be modeled by using a filter dynamic with a "stop-and-go" programming logic, as follows (see details, for instance, in [21,22]): where is the time-constant of the filter and is a non-uniform square signal taking values from the set . In this way, when , the solution in (23) is hold (the filter dynamic is stopped) to the last value of until , where then will on time follow the signal (the filter dynamic is released). It is clear that if is sufficiently large, and the square signal is too narrow when , the above dynamic is a kind of an ideal sampled-and-hold mechanism. In fact, and from the circuit point of view, the real sample-and-hold devices use a capacitor which is charged to the sampled value of the signal , then requiring a constant-time for charging (equivalent to our case). We use the above ZOH-model system in our numerical experiment realization.

In this paper, we have proposed a self-triggered sampled-data control to nonlinear systems with actuator faults. We realized it by implementing an event-triggered sampling rate by using the linear model of the plant and by also incorporating an actuator compensator via a fault observer design. According to numerical experiments applied to a non-damping torsional pendulum, our design has an acceptable performance. On the other hand, nowadays, the design novel torque control to wind turbines with actuator failures is an open research topic [23,24]. Moreover, a wind turbine torque control followed by the shaft generator mechanism resembles to a torsional pendulum. Hence, as a future work consists of implementing this theory to control of wind turbines. Finally, our design only needs to monitor the input-output of the process and does not require extra analog hardware for implementation.

This work was partially supported by the Spanish Ministry of Economy, Industry and Competitiveness under grants DPI2015 - 64170 - R (MINECO/FEDER).

Leonardo Acho and Pablo Buenestado contributed equally to this work. 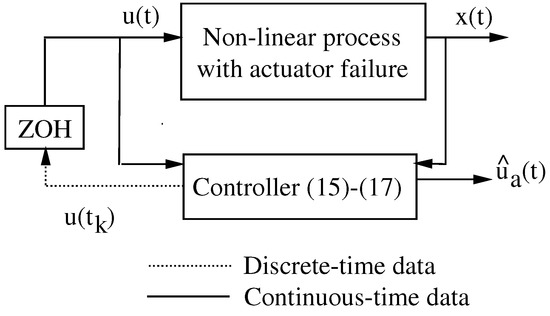 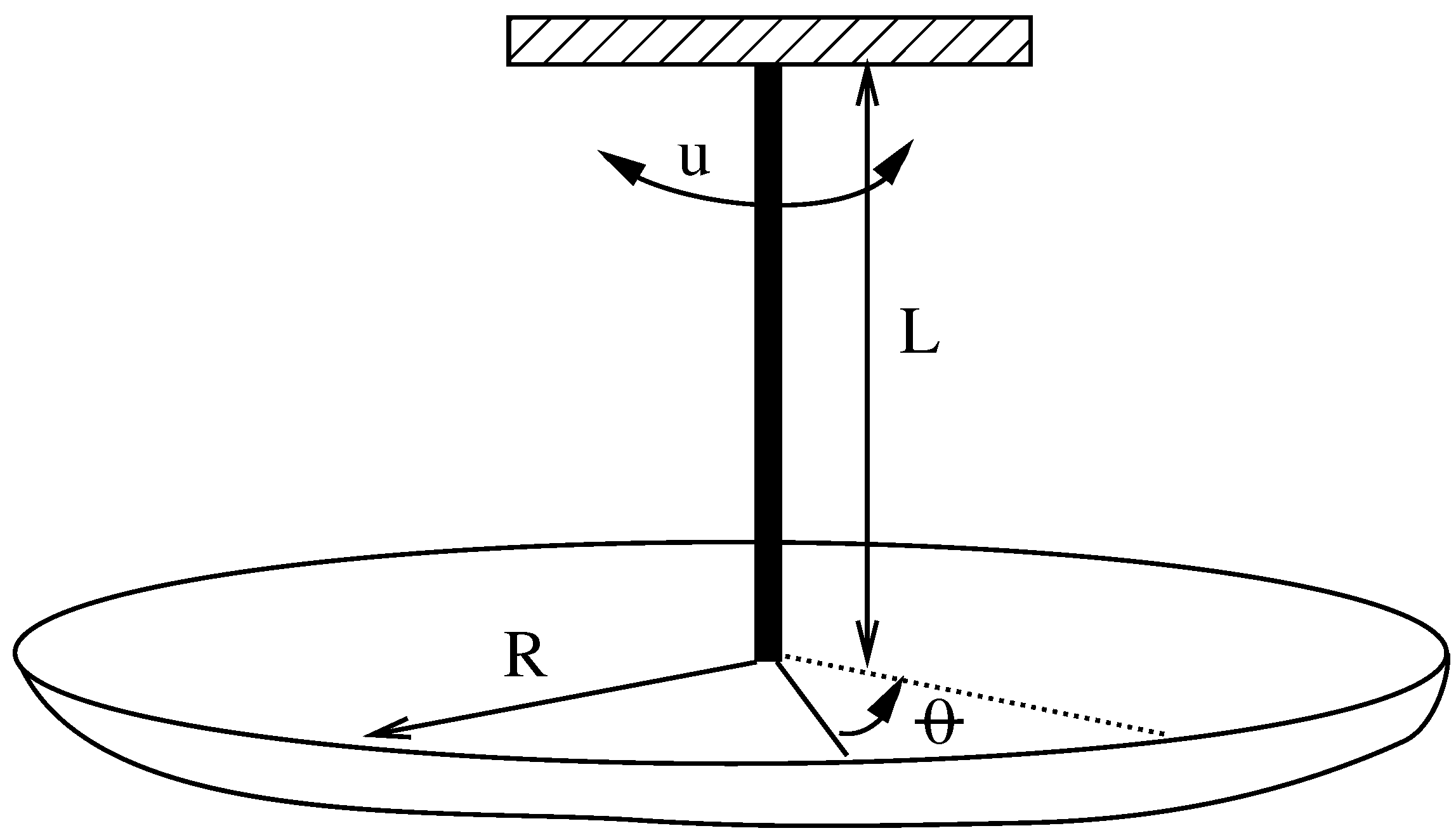