Tunnels, culverts, and subway stations are the main parts of an integrated infrastructure system. Most of them are constructed by the cut-and-cover method at shallow depths (mainly lower than 30 m) of soil deposits, where large-scale seismic ground deformation can occur with lower stiffness and strength of the soil. Therefore, the transverse racking deformation (one of the major seismic ground deformation) due to soil shear deformations should be included in the seismic design of underground structures using cost- and time-efficient methods that can achieve robustness of design and are easily understood by engineers. This paper aims to develop a simplified but comprehensive approach relating to vulnerability assessment in the form of fragility curves on a shallow two-story reinforced concrete underground box structure constructed in a highly-weathered soil. In addition, a comparison of the results of earthquakes per peak ground acceleration (PGA) is conducted to determine the effective and appropriate number for cost- and time-benefit analysis. The ground response acceleration method for buried structures (GRAMBS) is used to analyze the behavior of the structure subjected to transverse seismic loading under quasi-static conditions. Furthermore, the damage states that indicate the exceedance level of the structural strength capacity are described by the results of nonlinear static analyses (or so-called pushover analyses). The Latin hypercube sampling technique is employed to consider the uncertainties associated with the material properties and concrete cover owing to the variation in construction conditions. Finally, a large number of artificial ground shakings satisfying the design spectrum are generated in order to develop the seismic fragility curves based on the defined damage states. It is worth noting that the number of ground motions per PGA, which is equal to or larger than 20, is a reasonable value to perform a structural analysis that produces satisfactory fragility curves. View Full-Text
Keywords: two-story underground structure; fragility curve; GRAMBS; maximum likelihood; Latin hypercube sampling; pushover analysis two-story underground structure; fragility curve; GRAMBS; maximum likelihood; Latin hypercube sampling; pushover analysis
►▼ Show Figures 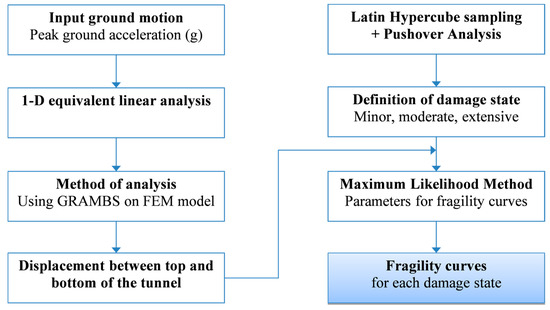