The main aim of the performed experiments was to compare the acoustic responses in the early age of setting and hardening of fine-grained cementitious composites which differ considerably in the development of hydration heat and process and development of shrinkage. For this purpose, two fine-grained cement composites (A, B) were made, each with a different w/c ratio and plasticizer content. The fresh composite formula is based on the ČSN EN 196-1 standard for the testing of cement strength characteristics. Composite “A” was made with quartz sand with the fraction of 0–2 mm, CEM I 42.5 R Portland cement (Cement Plant Mokrá, Brno, Czech Republic) and water. The ingredients were mixed at the ratio of 3:1:0.46. The composition of composite “B” was modified by adding a Sika Viscocrete polycarboxylate-based super-plasticizer (Sika Group, Brno, Czech Republic), which, among others, reduced the water coefficient to w/c = 0.35. The other components were the same. To produce both composites, a vertical axle forced concrete mixer with forced circulation and controllable mixing speed was used. Table 1 shows the composition of both composites and fresh mortar properties.
Three test specimens with the length of 1000 mm and cross-section of 100 mm × 60 mm were made from each mixture. They were primarily intended for shrinkage/swelling measurements and monitoring the material acoustic activities in the setting and the early stages of hardening.
The acoustic wave sensors should be placed directly on the object being measured, which, however, is not always possible. The reason may be that the object may not be easily accessible because of its design or because the object’s surface may be so hot that it may damage the sensor, or, as in this particular case, the surface is too unstable. In such cases, acoustic waveguides are used. A major disadvantage of waveguides is the loss of the resulting signal, which is caused by losses generated by the transition across the interface and by the signal being dampened inside the material. If a waveguide is used for scanning, there are two interfaces present. One is between the object’s surface and the waveguide and the other between the waveguide and the sensor [31].
The shrinkage behaviour was studied using a dilatometric shrinkage drain produced by Schleibinger [15], which is primarily designed for measuring relative longitudinal shrinkage of composite materials at early stages of setting and hardening. These testing drains are equipped with a sliding face during measurement supporting an inductive sensor connected to a data exchange, while the other drain face is fixed in place. This is how longitudinal shrinkage is measured along the specimen axis for about 72 h. To allow free deformation of the material during measurement, the inner drain surfaces are coated with a 2 mm thick polyethylene foil (MIRELON). Before the actual pouring, two additional holders were attached to the drain structure to hold the acoustic emission waveguides in place—one near the sliding face and the other at the opposite end of the drain. A thermal sensor to measure the temperature changes inside the specimens was installed near each fixed face. Detailed waveguide positions are shown in Figure 2. Measurements by acoustic emission were carried out using a DAKEL XEDO instrument using suitable magnetic sensors (MDK 13) and waveguides. The acoustic emission sensors were fixed to the waveguide, which was submerged in the fresh mixture.
During the measurement, the drains lay on a special weighing table [32] for continuous recording of mass losses caused by the desiccation of the surface of the test specimens placed in the shrinkage drains. Using the above described device, the measuring process could be started after the tested material has set slightly. In the experiment performed, the measurement started about 1 h after the fresh composite was poured in the dilatometric shrinkage drains. The actual measurement was carried out in an air-conditioned chamber to preserve a temperature in the range of 19 to 23 °C and ambient relative humidity in the range of 50 to 70% for about 72 h. It should be noted that the upper surface of the tested specimens was intentionally exposed to free desiccation for the entire time of measurement. For details on the testing device and measurement procedure, see [33].

The acoustic emission method seems to be a suitable complementary instrument for determining the incidence of new formations and later micro-cracks during the setting and hardening of cement composites. Identifying a particular source of acoustic emissions in cement composites containing aggregate is usually more difficult than in the case of cement pastes, especially during the stage of setting and early hardening [39]. In many cases, there are parallel phenomena which contribute to the overall progress of composites’ internal structure formation. Generally, the higher number of new formations and micro-cracks appear, the more acoustic emission events are generated. It may be stated that the higher the AE signal amplitude values are recorded, or AE signal energy is released, the more significant structural changes occur in the form of new formations or damage in the existing structure [40]. The number and size of micro-cracks in a cement composite significantly affects its final mechanical properties (i.e., strength, elastic modulus, durability, etc.). The application of the AE method to continuous monitoring of cement composites during setting and hardening may be an instrument suitable for timely detection of micro-damage. However, at this stage of technological progress, the application of the AE method may be rather complicated. The sensors cannot be placed on the specimen surface without having them embedded. Therefore, the use of waveguides seems to be better suited for observing the setting of a fresh mixture. Fixing the sensor to the waveguide improves the sensor’s sensitivity so the waves (signals) received become more stable due to the shape and length of the waveguide and are more easily detectable. Based on the characteristics of recorded signals (duration, amplitude, energy) the significance of the recorded AE events may be defined. In the ongoing investigation of materials’ structural changes, the AE measurements will be supplemented with the microscopic analysis, which allows the quantification of these micro-changes.

This outcome has been achieved with the financial support of the Czech Science Foundation under project no. 17-14302S “Experimental analysis of the early-age volume changes in cement-based composites” and the project no. LO1408 “AdMaS UP—Advanced Materials, Structures and Technologies”, supported by Ministry of Education, Youth, and Sports under the “National Sustainability Programme I”. 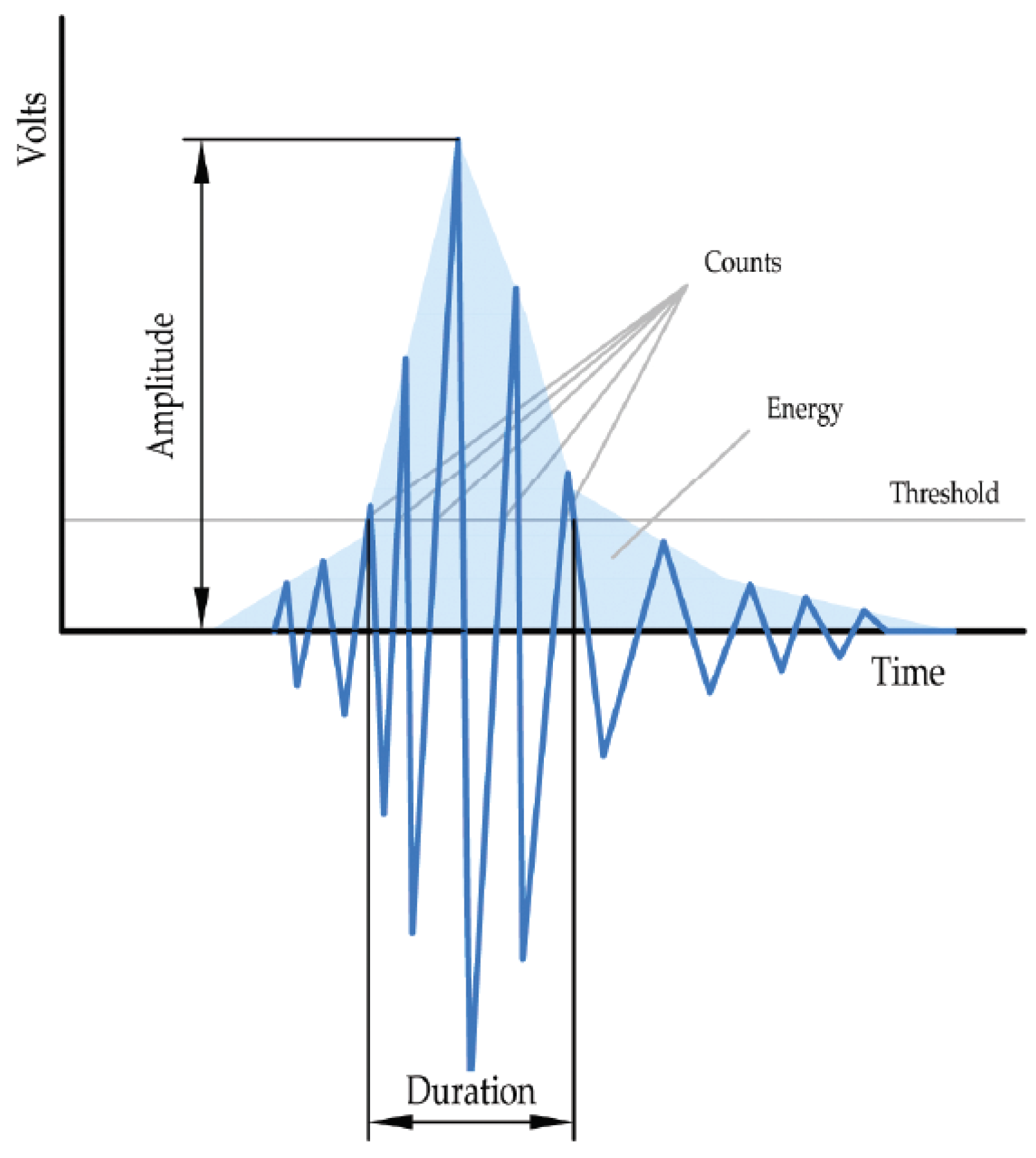 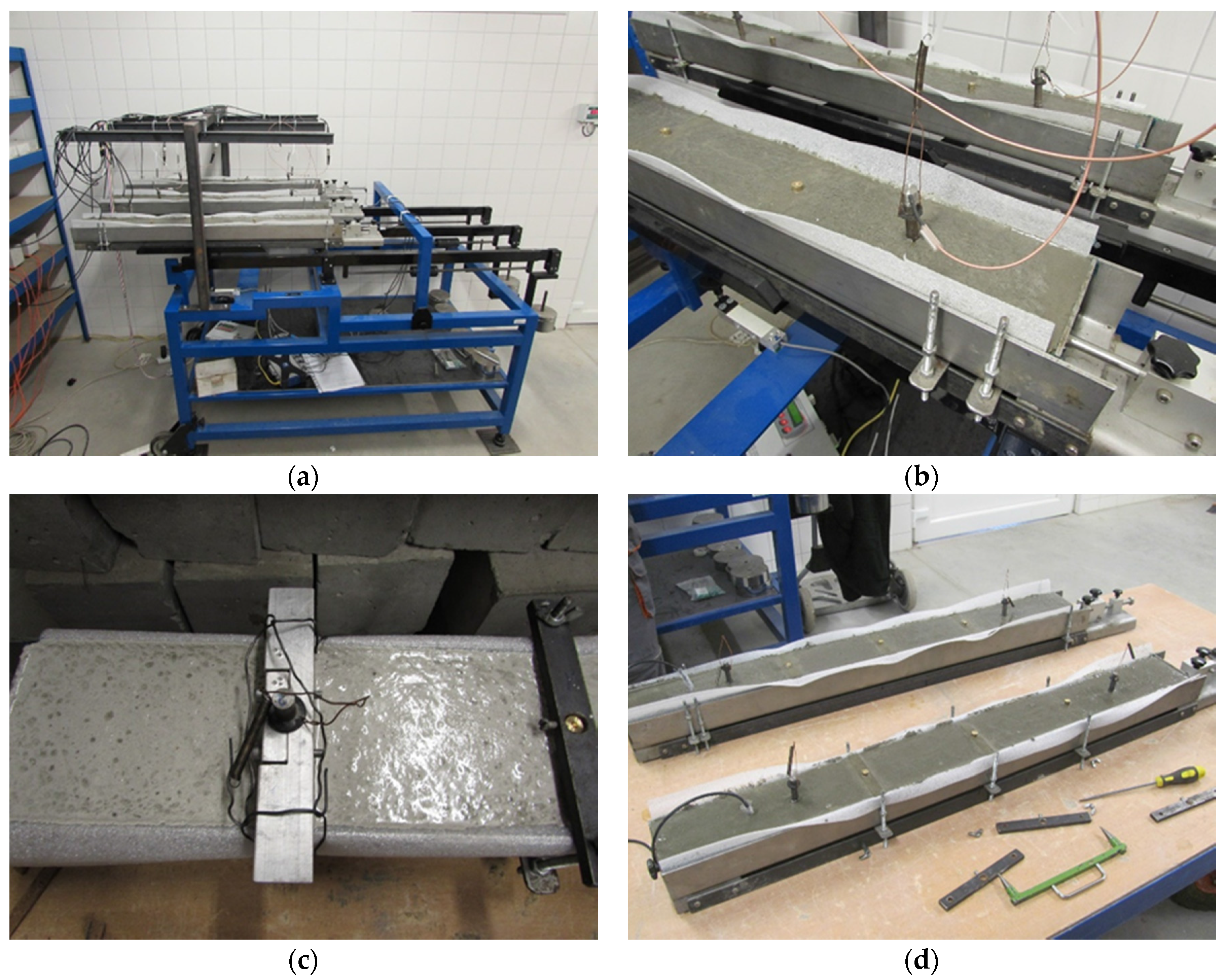