Chronic Inflammation in the Epidermis: A Mathematical Model
Next Article in Special Issue

The proposed CPV system includes an array of CPV units and an additional low-cost solar cell. Each CPV unit consists of a Fresnel lens as the POE, a plano-concave lens as the SOE, and an MJ solar cell. A silicon (Si) solar cell surrounds plano-concave lenses of the CPV units to capture diffuse solar radiation. Each CPV unit highly concentrates and uniformly distributes direct solar radiation on its MJ solar cell through its POE and SOE, whereas the Si solar cell captures diffuse solar radiation.
The design and layout of the proposed system are shown in Figure 1 and Figure 2, respectively.

Adding the SOE to the CPV unit improves the irradiance uniformity but causes optical loss in the unit. This section analyzes, evaluates, and compares the irradiance uniformity and optical efficiency of the proposed CPV unit to the conventional CPV unit. In this case, the additional Si cell is not included in the analysis and evaluation. In other words, the considered CPV unit contains the MJ solar cell, but not the Si solar cell.
The geometrical structure of the proposed CPV unit was designed and simulated by using the commercial optical modeling software, LightTools™ [33]. In our design and simulations, the material used for the Fresnel lens was PMMA with a refractive index of 1.49. The material used for the plano-concave lens was borosilicate glass N-BK7 with a refractive index of 1.52. The simulation parameters were the same as those of the design shown in Table 1. Since the LightTools software does not supports circle solar cells, square solar cells with size of 20 mm × 20 mm were used in the simulation models.
Ray-tracing layouts of the conventional CPV unit and the proposed CPV unit with the SOE are shown in Figure 6a,b, respectively. In the proposed CPV unit, the POE concentrated and focused direct sunrays on the SOE’s surface, and then the SOE distributed the sun rays over the solar cell uniformly, as shown in Figure 6b.

Using the SOE, the proposed CPV unit added an additional optical loss to the system. However, the optical loss of 5.86% caused by the SOE found in the simulation is small and can be compensated for using the Si low-cost cell to capture diffuse solar radiation, which is discussed in the next section. Meanwhile, by using the SOE, the proposed CPV unit significantly improved the irradiance uniformity compared to the conventional CPV unit without the SOE, resulting in the elimination of hot spots and increasing the performance and lifetime of the solar cell.
Additionally, using an existing simple plano-concave lens as the SOE resulted in a small reduction of the acceptance angle of the proposed CPV system. The problem can be resolved by designing a new SOE type in order to improve not only the irradiation uniformity, but also the acceptance angle of the proposed CPV system.

In this paper, we proposed a novel CPV system to improve both irradiation uniformity and system efficiency. Each CPV unit of the proposed system uses a Fresnel lens as the POE associated with a plano-concave lens as the SOE to highly concentrate and uniformly distribute the sunlight over a MJ solar cell. By using the SOE, the irradiance uniformity is significantly improved in the system. Additionally, the system also uses an additional low-cost solar cell to harvest diffuse solar radiation. The direct solar radiation is concentrated and focused by the Fresnel lenses and then distributed uniformly by the plano-concave lenses on the MJ solar cells, whereas the diffuse solar radiation is captured by the low-cost solar cell. Therefore, the conversion efficiency of the designed system is significantly increased. The analyzed and simulated results show that the proposed CPV system significantly improves both the irradiance uniformity and the system efficiency compared to the conventional CPV systems. Numerically, for our simulation models, the designed CPV with the SOE and low-cost solar cell provided the optical power ratio increase of about 17.12% compared to the conventional CPV without the low-cost cell, and about 10.26% compared to the conventional CPV without using both the SOE and additional low-cost cell. The study is the first to integrate both the improvement of irradiance uniformity and the collection of diffuse solar radiation into a CPV system. The proposed CPV system is very suitable for medium DNI regions, such as Korea and Japan.
Our future work is to design a new SOE type that is used to replace the simple plano-concave lens of the CPV unit in order to improve not only the irradiation uniformity, but also the acceptance angle of the proposed CPV system.

This work was supported by the National Research Foundation of Korea (NRF) grant funded by the Korea government (MSIP) (No. 2014R1A2A1A11051888). 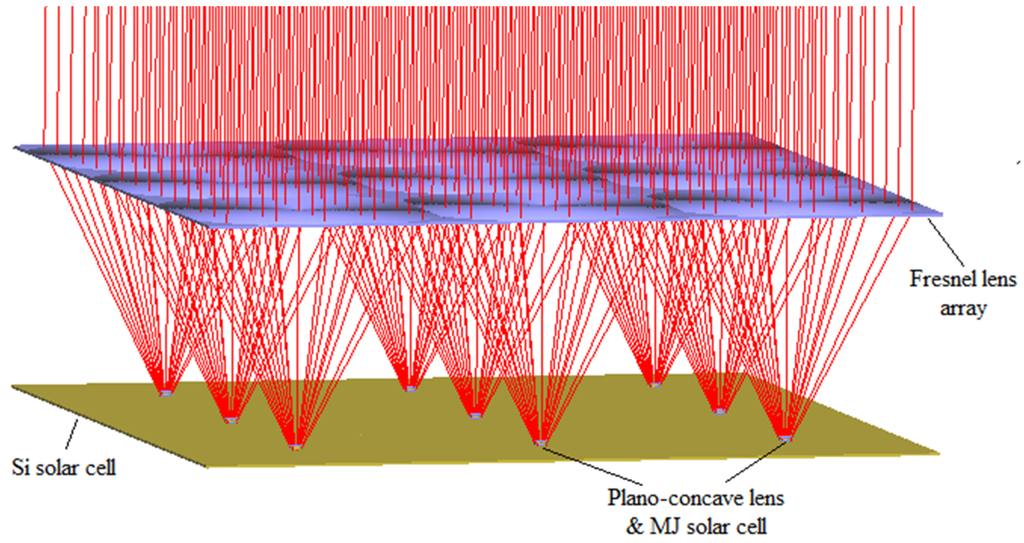 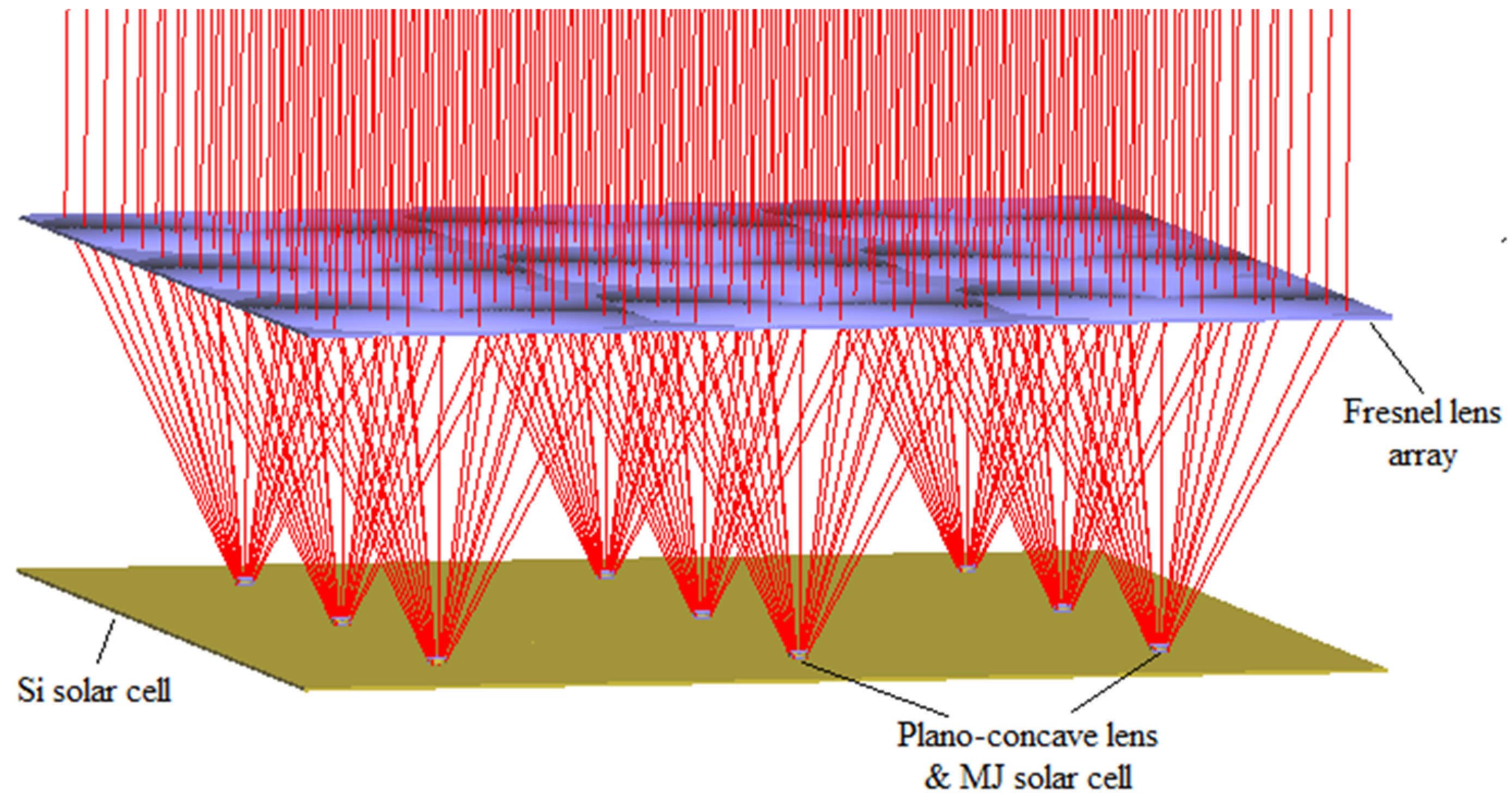 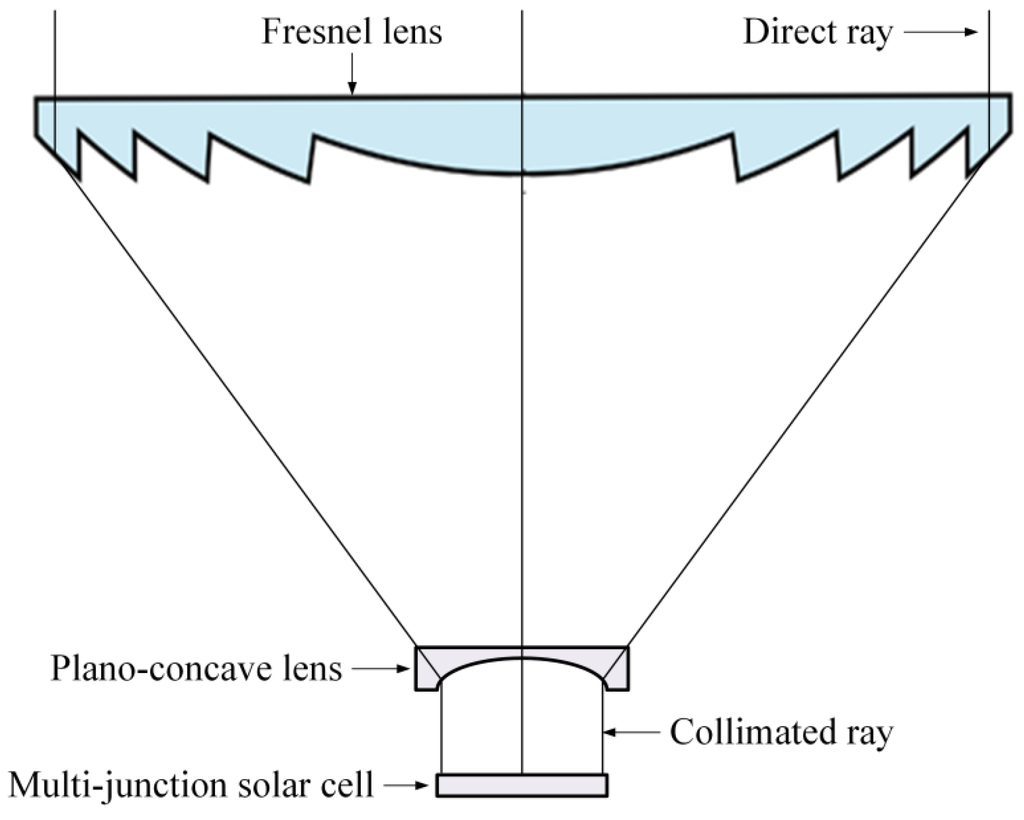 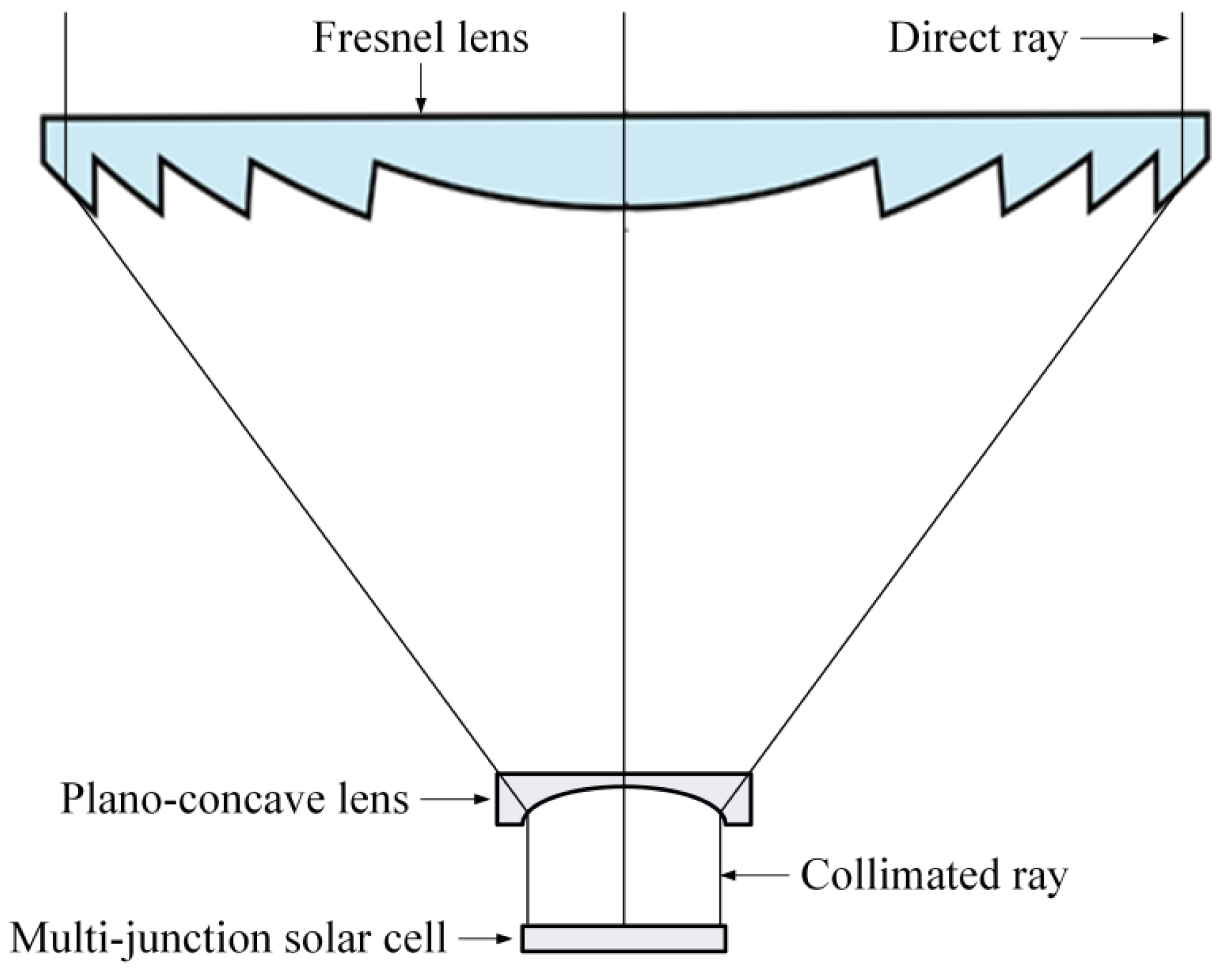 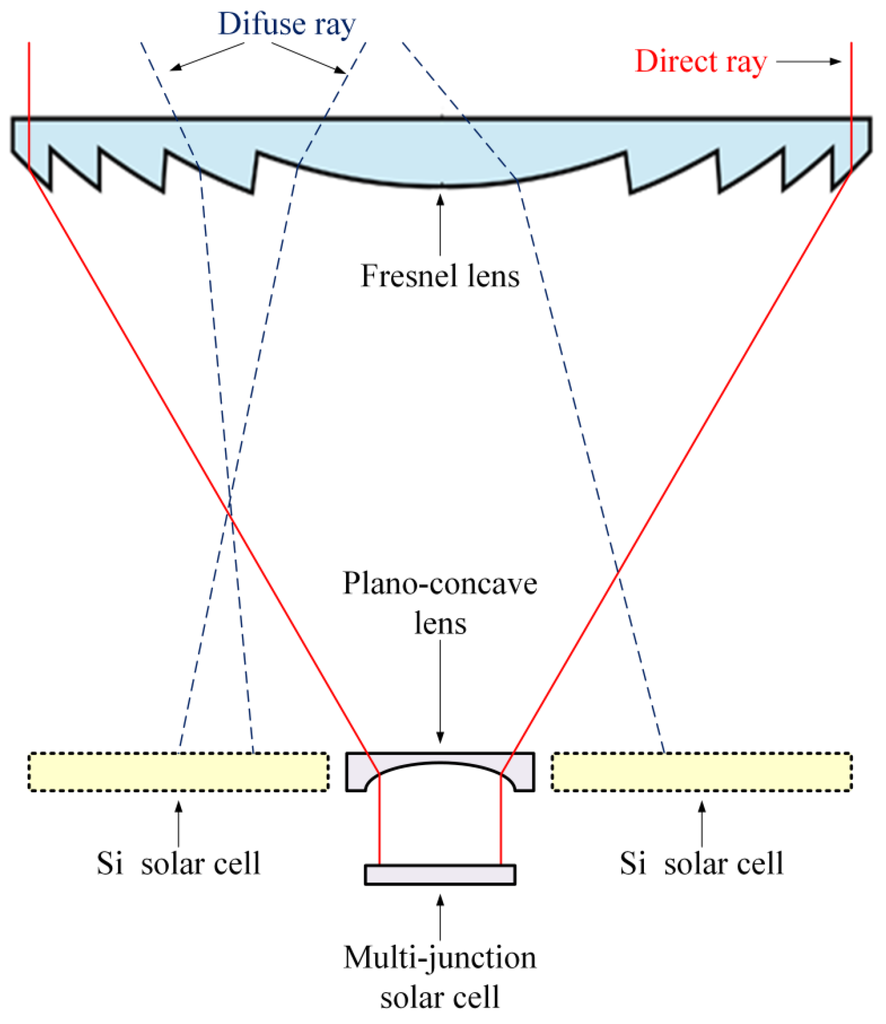 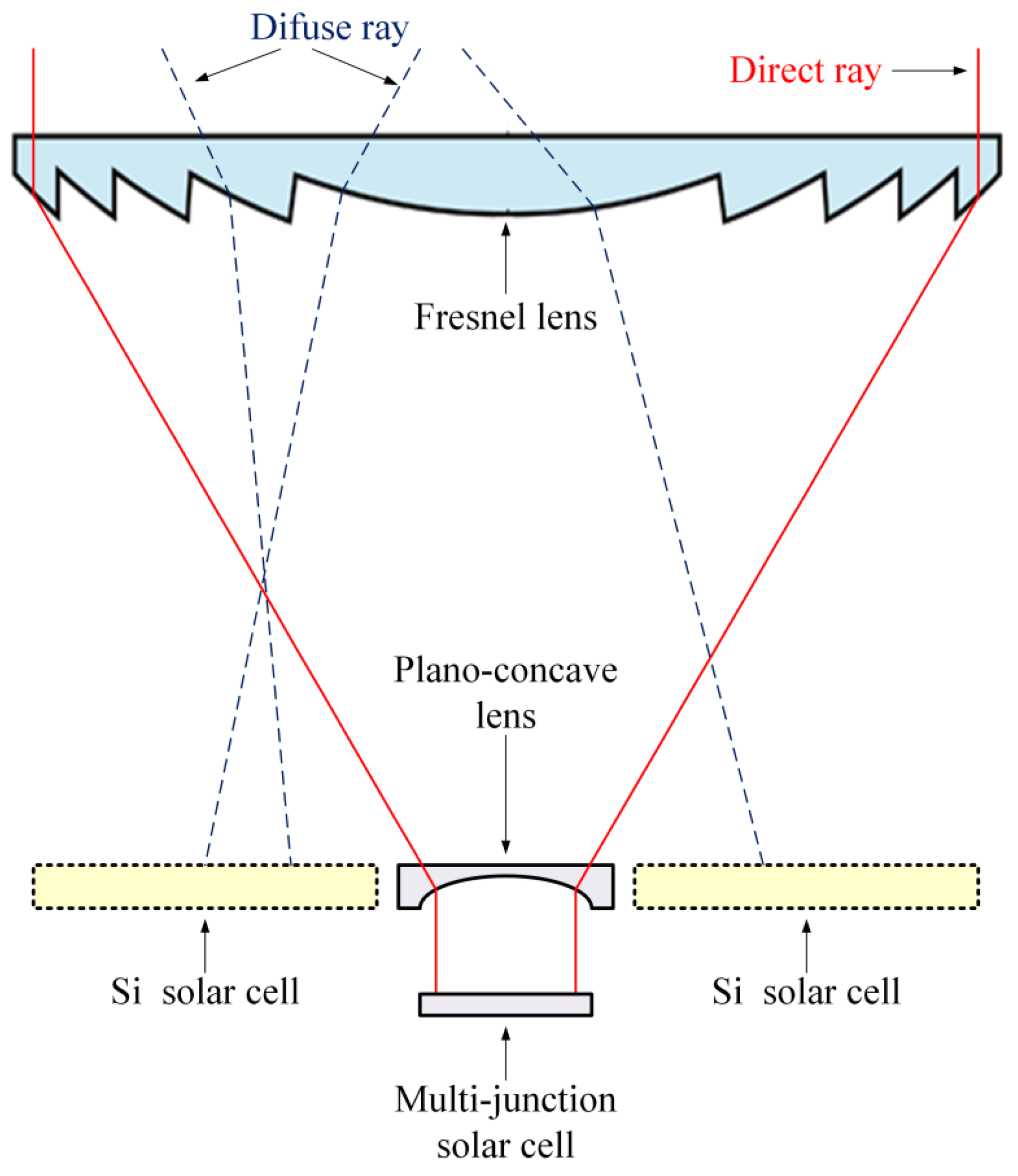 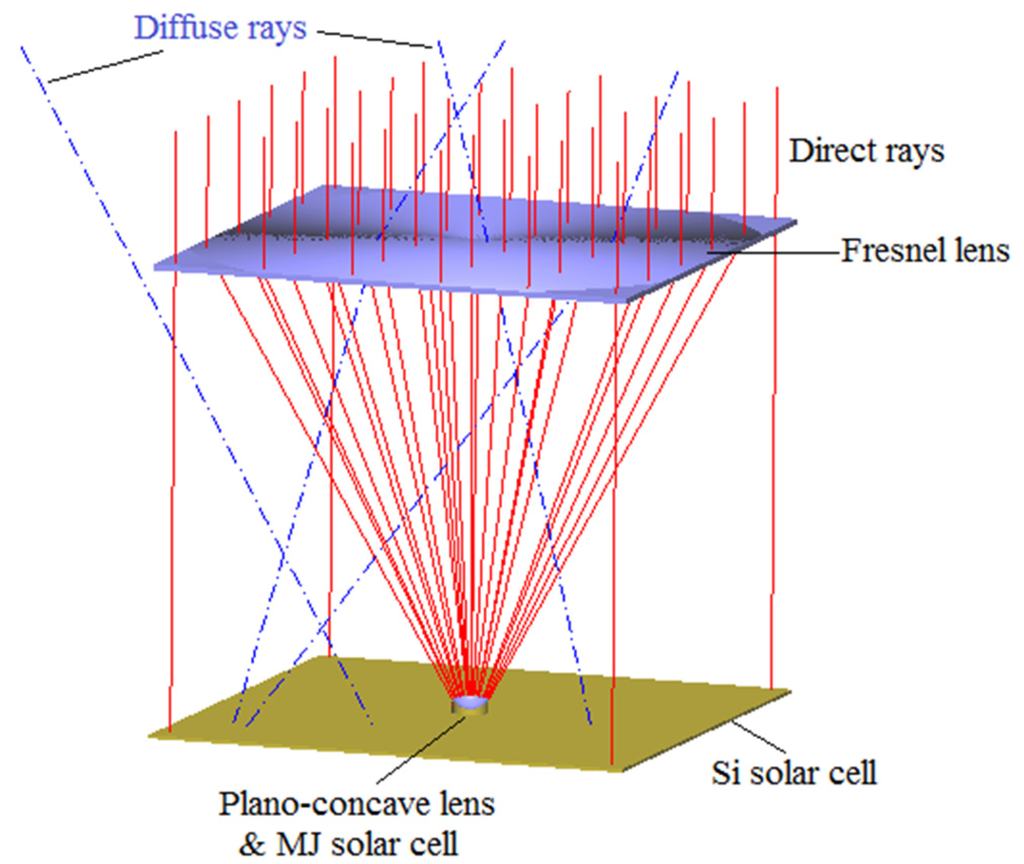 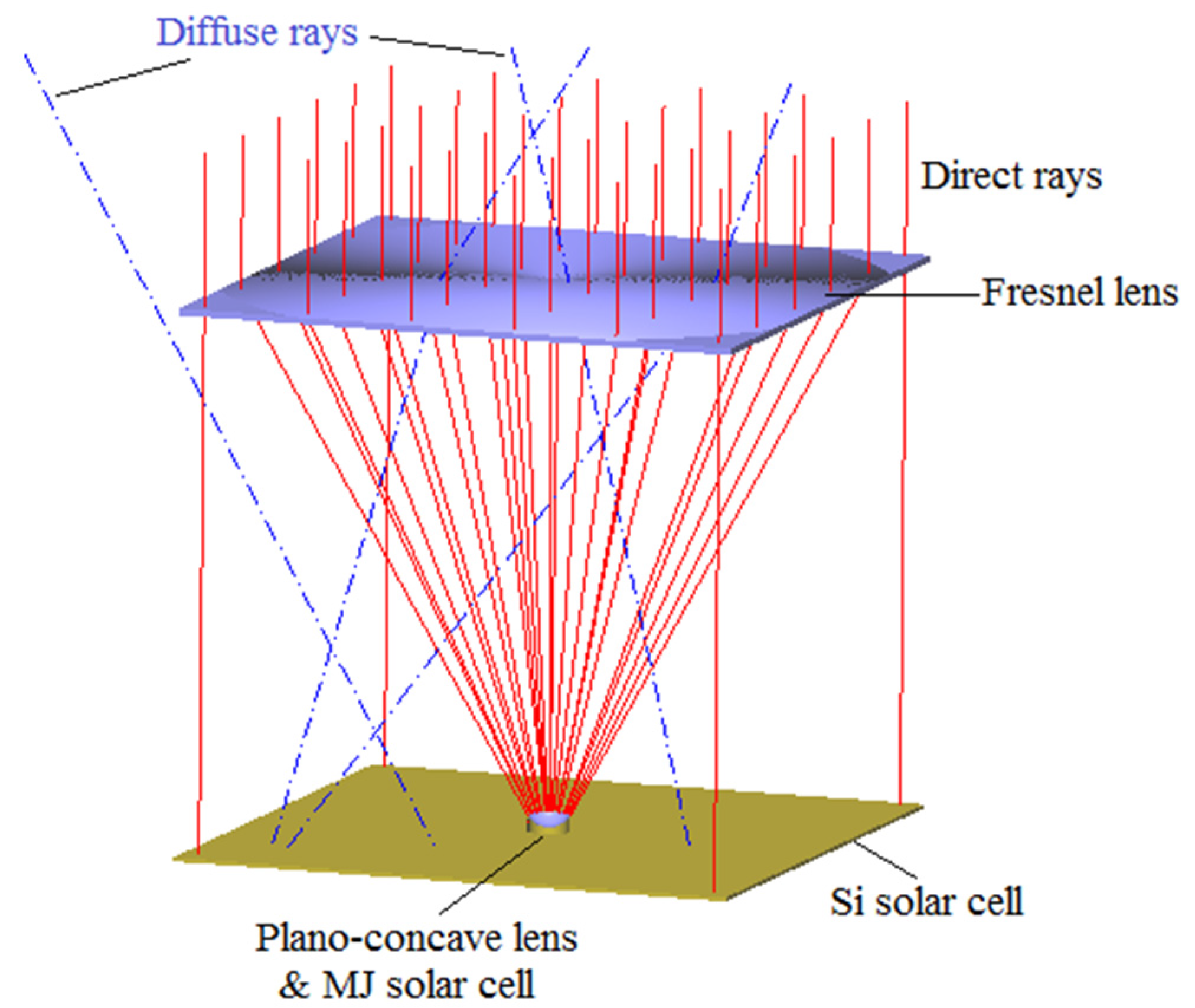 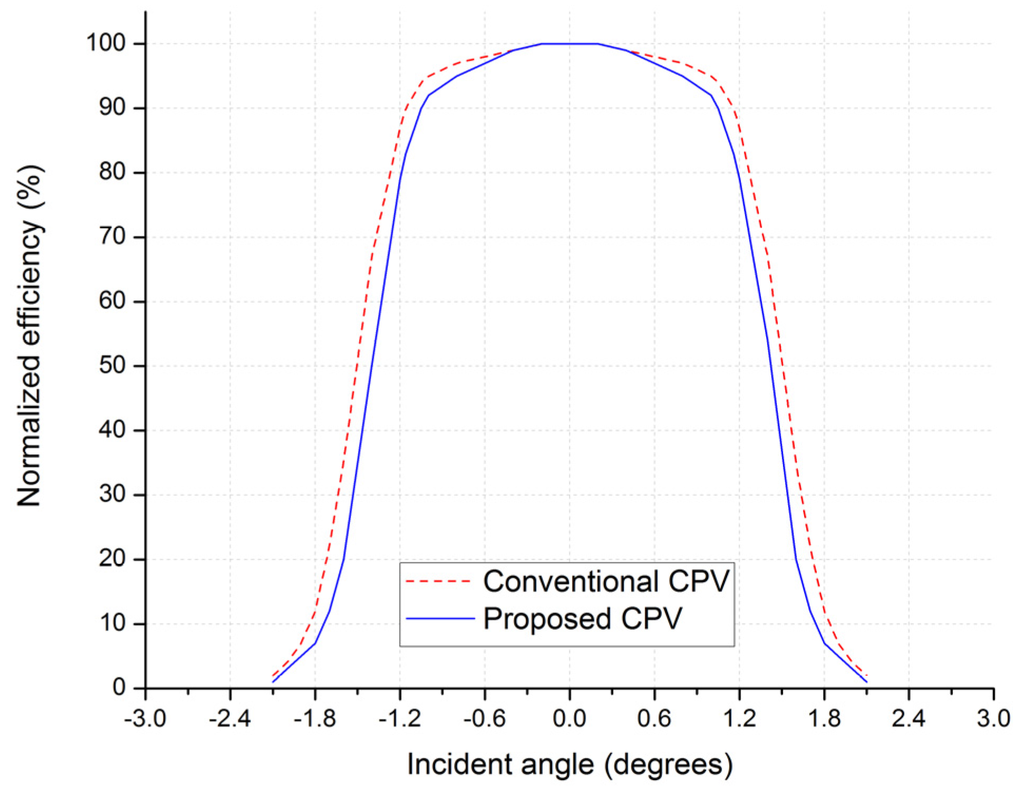 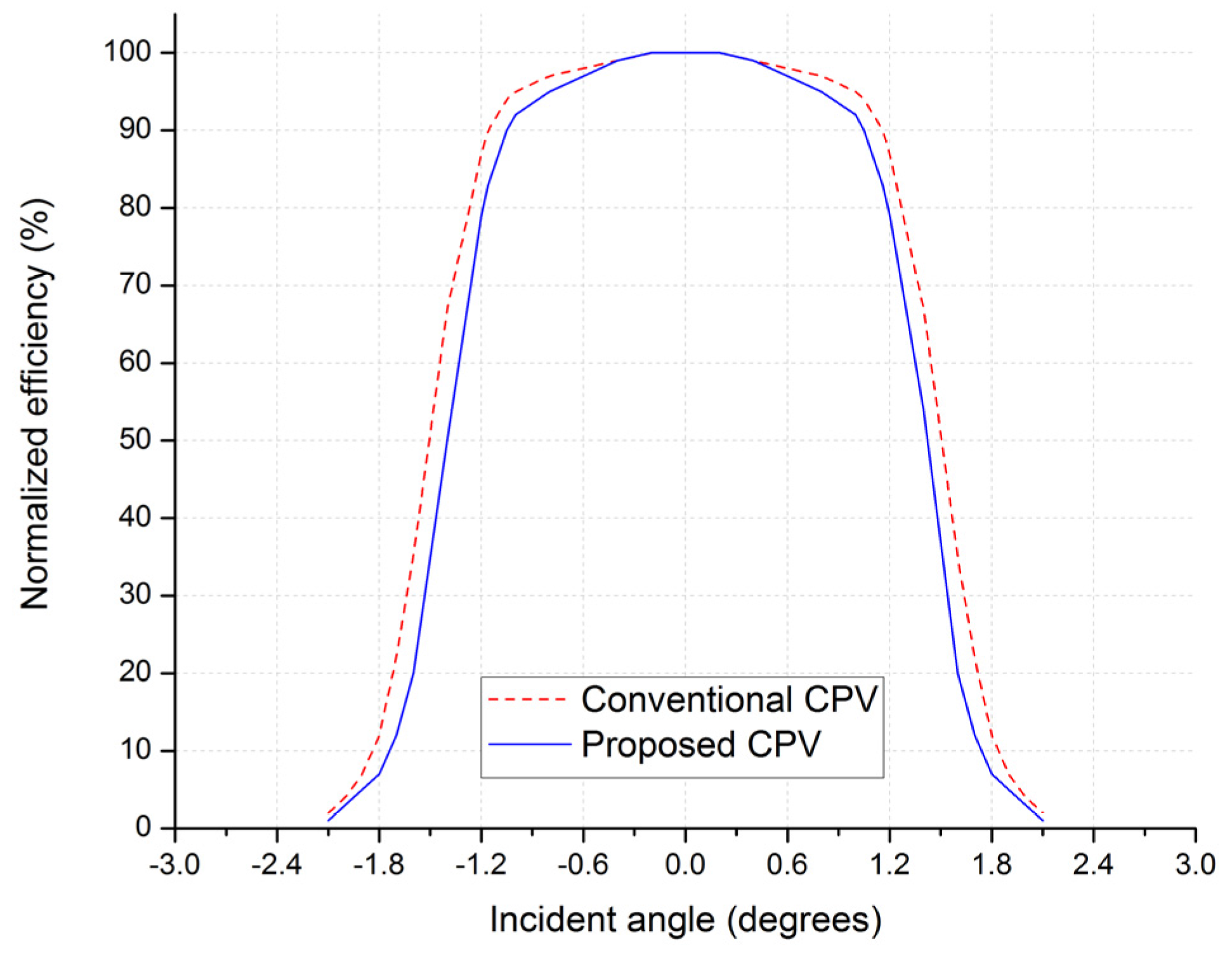 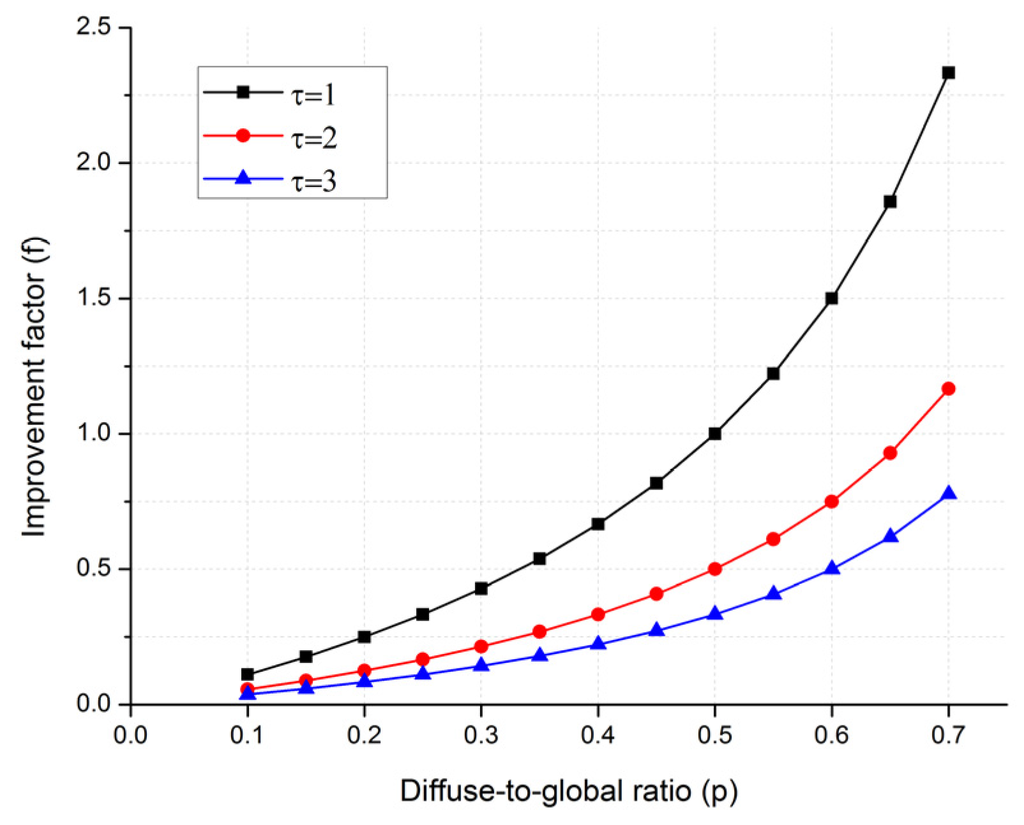 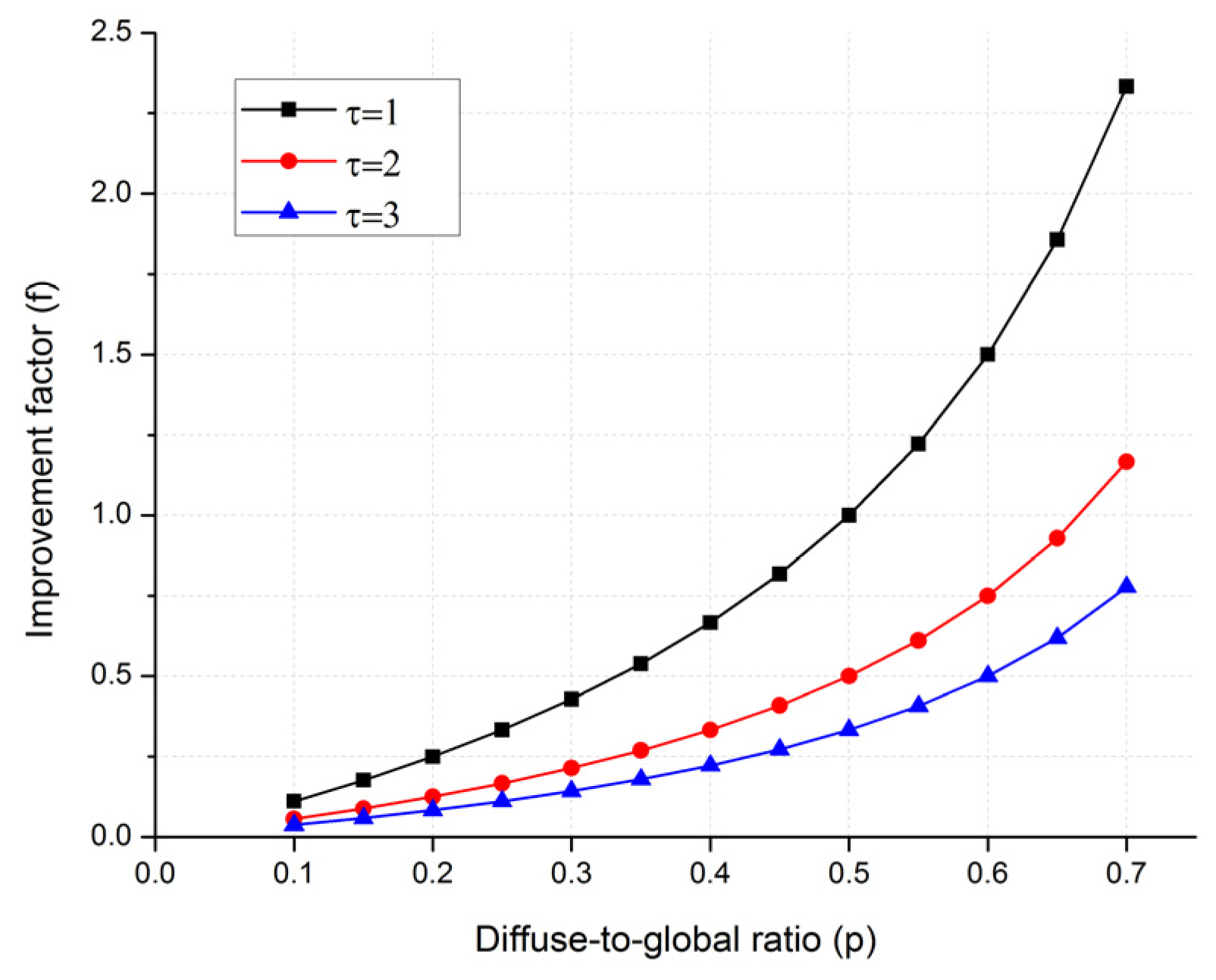