On Site Investigation and Health Monitoring of a Historic Tower in Mantua, Italy
Previous Article in Journal

Sago biomass is an agro-industrial waste produced in large quantities, mainly in the Asia-Pacific region and in particular South-East Asia. This work focuses on using sago biomass to obtain cellulose as the raw material, through chemical processing using acid hydrolysis, alkaline extraction, chlorination and bleaching, finally converting the material to pharmaceutical grade carboxymethyl sago cellulose (CMSC) by carboxymethylation. The cellulose was evaluated using Thermogravimetric Analysis (TGA), Infrared Spectroscopy (FTIR), X-Ray Diffraction (XRD), Differential Scanning Calorimetry (DSC) and Field Emission Scanning Electronic Microscopy (FESEM). The extracted cellulose was analyzed for cellulose composition, and subsequently modified to CMSC with a degree of substitution (DS) 0.6 by typical carboxymethylation reactions. X-ray diffraction analysis indicated that the crystallinity of the sago cellulose was reduced after carboxymethylation. FTIR and NMR studies indicate that the hydroxyl groups of the cellulose fibers were etherified through carboxymethylation to produce CMSC. Further characterization of the cellulose and CMSC were performed using FESEM and DSC. The purity of CMSC was analyzed according to the American Society for Testing and Materials (ASTM) International standards. In this case, acid and alkaline treatments coupled with high-pressure defibrillation were found to be effective in depolymerization and defibrillation of the cellulose fibers. The synthesized CMSC also shows no toxicity in the cell line studies and could be exploited as a pharmaceutical excipient. View Full-Text
Keywords: ecofriendly; sago palm; carboxymethyl; cellulose; pharmaceutical grade; extraction ecofriendly; sago palm; carboxymethyl; cellulose; pharmaceutical grade; extraction
►▼ Show Figures 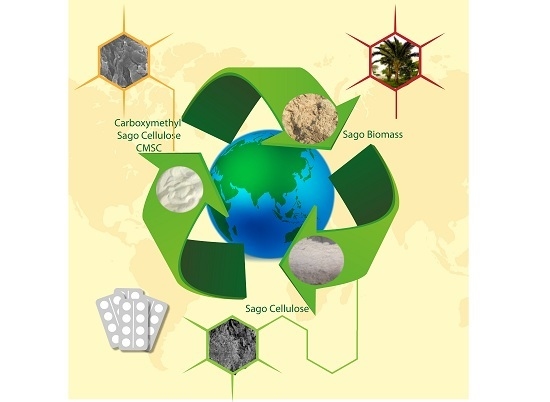