An inclusion complex of β-cyclodextrin and 4-aminothiophenol was assembled by hydrophobic interaction of the host (β-cyclodextrin) and guest (4-aminothiophenol). The complex was isolated as crystalline solid and studied by single crystal X-ray diffraction method along with NMR and IR spectroscopy. Two cyclodextrin rings each containing one disulfide form of 4-aminothiophenol were found to pair up by hydrogen bonding of the outer rim -OH groups. The phenyl disulfide moiety of 4-aminophenyl disulfide molecule was found in the core of β-cyclodextrin, while the amino functional groups were positioned to the exterior of the cyclodextrin ring. Phenyl rings of the guest molecule from each partner of the paired cyclodextrin complex were found parallel to each other, indicating possible π-π stacking interaction between them.
Keywords: crystal structure; host–guest complex; inclusion complex; supramolecular interactions crystal structure; host–guest complex; inclusion complex; supramolecular interactions

Cyclodextrins are the most popular host molecule for supramolecular complexation. This has much to do with their efficacy in complexation with hydrophobic host molecules. Cyclodextrins have a hydrophilic exterior and hydrophobic interior. They are also available in various sizes. Among the available size variety, β-cyclodextrins are of suitable size to encapsulate aromatic compounds. β-CD forms inclusion complexes usually as dimers, due to its affinity to self-associate [1]. The dimers form because of hydrogen bonding between the hydroxyl groups on the rims of these molecules (Figure 1) [2,3]. 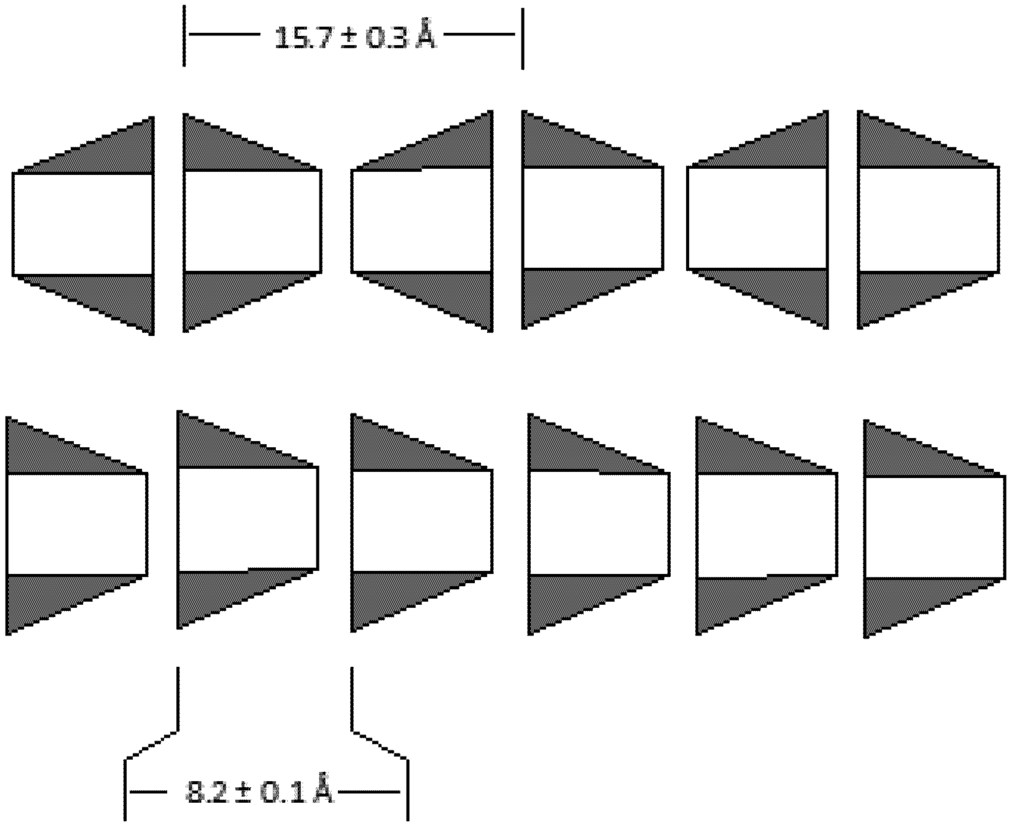 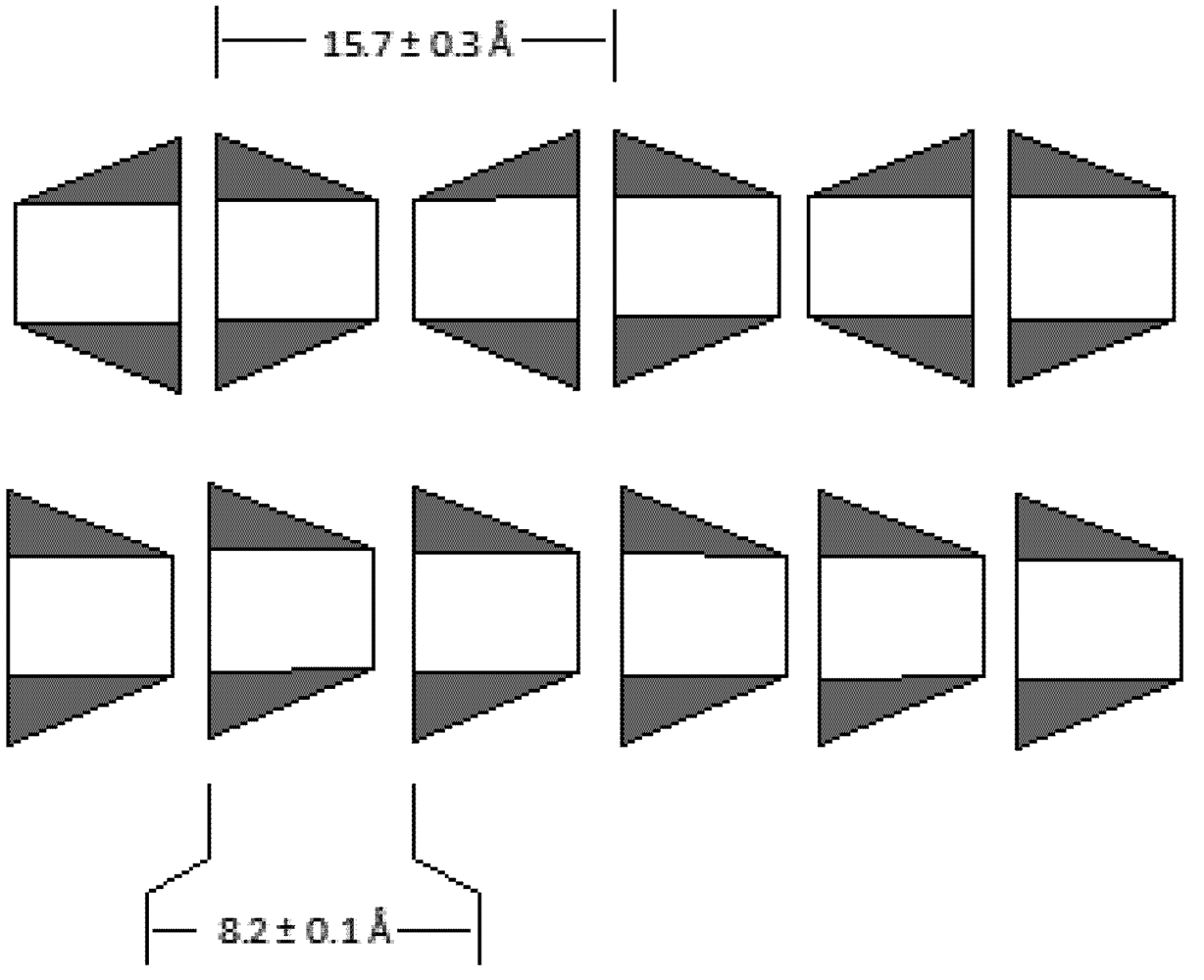 Host–guest complexation with β-CD is commonly used in pharmaceuticals to solubilize water insoluble drugs [4]. Other uses for β-CD include the stabilization of gold nanoparticles and projects involving environmental remediation [5,6]. As an example of complexation of hydrophobic guest molecule pyrene and β-CD could be mentioned [6]. The solid state structure of this complex revealed that the pyrene molecule was positioned inside the cavity prepared by two cyclodextrin rings in a head-to-head fashion. The guest pyrene molecule was inside at the juncture of the two β-CD rings in a hydrophobic environment.
Thiols are a popular tool for the fabrication of nano-materials [7,8] as linkers and stabilizers. Aromatic bifunctional aminothiophenols have been employed for this purpose by making a host–guest complex with β-CD [5]. It is known that guest molecules may behave differently inside the host molecule [9,10,11,12,13,14,15]. For example, highly conjugated cyanine dyes get a boost in fluorescence response when complexed with cyclodextrins [10,11]. As most molecular properties depend on structural arrangements, it is important to learn about the structural arrangement of host–guest complexes. In this article, we report some structural aspects of such complexation between β-CD and 4-aminothiophenol (4-ATP).

Host–guest interaction was studied between β-CD and 4-aminothiophenol (4-ATP). The host–guest complex was assembled by hydrophobic interaction for each other. Structural analysis of the complex comprises of IR, 1H NMR and single crystal X-ray diffraction studies. The guest 4-ATP is insoluble in aqueous solution, while the host β-CD is soluble in water (1.08 mg/mL). The complexation was induced by mixing an ethanolic solution of 4-ATP in an aqueous solution of β-CD. IR spectrum of the complex preserves most features of β-CD, while the bands at 1623 (w, sh), 1596 (w, sh), 1494 (w, sh) were unique. These were assigned due to the N-H bending modes and C-C stretching frequency of the aromatic ring as part of 4-ATP. The NMR spectrum of the complex bears a stronger indication of complex formation. 1H NMR of the complex had two doublets at δ 6.6 and 7.0. These are signals from the aromatic guest molecule. The 1H NMR of β-CD and the complex were recorded in D2O. In D2O the guest molecule is not soluble and hence there was signal from the aromatic proton of the guest molecule in the inclusion complex. The NMR spectra recorded were very noisy in the δ3.5-5 region because of the water molecules in the hydrophilic region of the complex shadowing the signals from the β-CD ring.
It is a common practice to use thiols for the fabrication of nanomaterials [7,8,16] as linkers. In a separate study 4-ATP/β-CD complex was bonded to gold nanoparticles [5]. Thiols are known to oxidize to become disulfides. Evidently, previous reports ignored this common structural modification of the thiol molecules. Suitable crystals of the complex were isolated for single crystal X-ray diffraction studies. Scheme 1 illustrates the structural modification of 4-ATP to its disulfide form. The reason for oxidation was determined, though it was not measured if the oxidation of the guest molecule, 4-ATP, was accelerated in the β-CD environment. However, the suspected causes could be solely, or by a combination of, dissolved oxygen and atmospheric oxygen in the drying process.

The crystal structure of 4-ATP alone reveals no similar arrangements of the aromatic rings [17]. Figure 3 shows the packing diagram of pure 4-ATP crystal and the 4-ATP as guest molecule in the lattice of 4-ATP/β-CD complex. The cyclodextrin molecules have been eliminated for clarity.

The solid-state structural data has been submitted to the Cambridge Crystallographic Data Center. The structure deposition number is CCDC 879687. Crystallographic data table for the complex is provided in Table 1.

The host–guest complex of 4-ATP and β-CD was studied for structural insight. 4-ATP was found to be converted to 4,4'-diaminodiphenyl disulfide. The β-CD units were found to be involved in hydrogen bonding via the –OH groups of the larger rims of cyclodextrins in a head-to-head fashion. The modified guest molecule, 4,4'-diaminodiphenyl disulfide from two neighboring complexes were found to be parallel to each other with an average distance of 3.7(±4) Å, thereby suggesting active π-π interaction. The amine terminal of the guest molecule is positioned outside the host cavity, indicating possible contribution towards the solubility of the complex in water.