Pretreated dirty cotton residue (PDCR) from the textile industry was used as an alternative carbon source for the submerged cultivation of Aspergillus oryzae and the production of xylanases. The filtered culture supernatant was fractionated by ultrafiltration followed by three chromatographic steps, which resulted in the isolation of a homogeneous low-molecular-weight xylanase (Xyl-O1) with a mass of 21.5 kDa as determined by sodium dodecyl sulfate-polyacrilamide gel electrophoresis (SDS-PAGE) co-polymerized with 0.1% oat spelt xylan. Enzyme catalysis was the most efficient at 50 °C and pH 6.0. The Km values (mg·mL−1) for the soluble fraction of oat spelt and birchwood xylans were 10.05 and 3.34, respectively. Xyl-O1 was more stable in the presence of 5,5-dithio-bis-(2-nitrobenzoic acid) (DTNB), 1,4-dithiothreitol (DTT), l-cysteine or β-mercaptoethanol, which increased the rate of catalysis by 40%, 14%, 40% or 37%, respectively. The enzyme stability was improved at pH 7.0 in the presence of 20 mM l-cysteine, with the retention of nearly 100% of the activity after 6 h at 50 °C. Xyl-O1 catalyzed the cleavage of internal β-1,4 linkages of the soluble substrates containing d-xylose residues, with a maximum efficiency of 33% for the hydrolysis of birchwood xylan after 12 h of incubation. Identification of the hydrolysis products by high-performance anion exchange chromatography coupled with pulsed amperometric detection (HPAEC-PAD) indicated the predominance of the hydrolysis products X2-X6 during the first 12 h of incubation and the accumulation of higher xylooligomers after the elution of the last xylooligomer standard, xylohexaose. View Full-Text
Keywords: agro-industrial residues; hemicellulose; enzyme purification; xylanase; hydrolysis agro-industrial residues; hemicellulose; enzyme purification; xylanase; hydrolysis
►▼ Show Figures 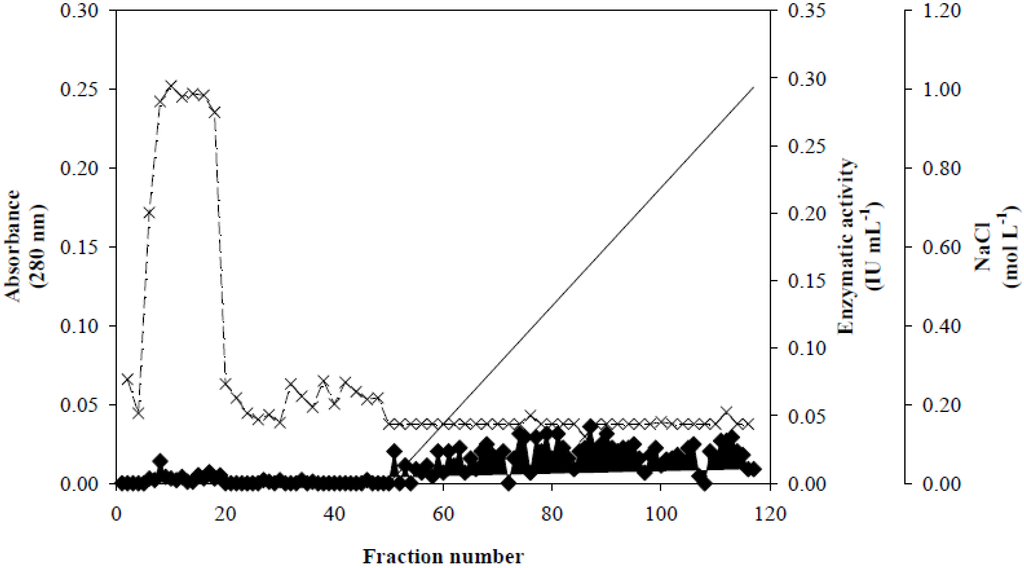