Constructed Technosols: A Strategy toward a Circular Economy
Previous Article in Journal

Based on the defined input and output variables and other necessary parameters, models of artificial neural networks—multilayer perceptron (MLP)—were defined. The number of layers, as well as the number of neurons in hidden layers, is determined experimentally, and the number of neurons in the input and output layer is determined based on the number of input and output values. The number of hidden layers was increased from one to three during the model formation. The largest number of hidden neurons in each of the hidden layers is 15. Ten models of artificial neural networks were formed. In five models, the data were scaled using the min-max procedure, while in the remaining five models, the StandardScalar procedure was used.
All neural networks in the model have three input values and one output value. Models of neural networks with min-max standardization for predicting the deflection of continuous beams are shown in the following table (see Table 6). It also lists the characteristics of each model with a measure of accuracy determined by means of the mean absolute percentage error (MAPE).
Models of neural networks formed with data scaled using the StandardScalar normalization procedure are shown in the following table (see Table 7). This table also shows the characteristics of the models as well as the accuracy of the estimate obtained by the mean absolute percentage error (MAPE).
In two models, random data selection was performed. In one model, it was conducted using kFold-CrossValidation for k = 10 and in the other one using LeaveOneOut-CrossValidation (LOOCV). The accuracy measure of these models is determined using the mean absolute percentage error (MAPE) (see Table 8 and Table 9). In models where dividing data was conducted by using kFold-CrossValidation, the data were scaled with StandardScalar, and in those models in which the division was performed using LOOCV, the data were scaled through the min-max function. The two models that gave the best results in each of the random data selections are presented here.
Considering and comparing the presented models, it is noticed that the NND3 model has the best performances, i.e., gives the smallest error in the prediction. For the NND3 model, data scaling was applied using StandardScaler. It defines one input, three hidden and one output layer of neurons. There are three neurons in the input layer. In the hidden layers, from the first to the third, there are seven, 15 and three neurons. There is one neuron in the output layer. The architecture of the neural network is shown in Figure 4. The activation function of the hidden layer is the function of the rectified linear unit (Swish). The number of conducted epochs of the model with the highest accuracy is 1000. The measure of the accuracy of model estimation is expressed through the mean absolute percentage error and amounts to 9.00%.
The following diagram shows the value of the mean absolute percentage error per training and test set, depending on the number of epochs when training the artificial neural network (see Figure 5).
The relationship between the values obtained in the experimental study and the predicted values with the help of neural networks on the training and test sets is shown in the following diagram (see Figure 6). Deflection values obtained by prediction on training and test sets converge to the line, and this indicates the high reliability of the prediction.
The model with the highest accuracy is the model on the basis of which the final model for estimating the deflection of continuous beams reinforced with GFRP reinforcement was made and on the basis of which the prediction model was defined.
The sensitivity of the output value on the input variables, i.e., the influence of the force, effective moment of inertia of the cross-section in the middle of the span (EMI_field) and effective moment of inertia of the cross-section above the support (EMI_support) on the value of deflection, is shown in the following diagram (Figure 7). The diagram clearly shows that the force has the greatest influence on the value of deflection, 58.40% in relation to the effective moments in the middle of the span and above the support.

This paper presented the application of artificial neural networks with the purpose of estimating deflection values on continuous beams with GFRP reinforcement by applying the concentrated force in the midpoints of the spans.
Based on the results presented in the research, it is concluded that the model with the highest accuracy of deflection estimation in continuous beams with GFRP reinforcement and loaded with concentrated force in the midpoints of the spans is a model of an artificial neural network whose architecture is presented with one input, three hidden layers and one output layer of neurons. There are three neurons in the input layer of neurons, seven neurons in the first hidden layer of neurons, 15 in the second and three in the third and one neuron in the output layer of neurons. The activation function of the hidden layers of neurons is Swish, while the activation function of the output layer is linear (Identity). The number of epochs conducted on the model is 1000. The measure of model accuracy is represented by the mean absolute error (MAPE). Its value for models with the best performance is MAPE = 9.00%.
The accuracy of the prediction model can be improved by increasing the number of data in the database. In addition to this, the prediction model would have the possibility of wider application if the database were expanded with certain material characteristics or continuous beam characteristics. Some of the characteristics could be: cross-section of a beam, type of FRP reinforcement, the percentage of reinforcement in the span, the percentage of reinforcement above the support, ratio of percentage of reinforcement in the span and above the support, etc. Potential parameters which could be used for expanding the database would, actually, be the input parameters of the prediction model.
The high reliability of the prediction model confirms the possibility of using artificial neural networks for the purpose of deflection prediction. This statement is important in the fact that the deflection calculation by using conventional computing techniques is quite complex. The advantage of neural networks is that they can solve new problems, based on previously learned solved problems. In addition to this, they have an advantage which is reflected in their adaptability. The reliability of prediction models made by neural networks depends on the quality and quantity of data. Experimental research provides a large amount of high-quality data. The data used to define the prediction model for deflection prediction are those from an experimental study conducted on eleven continuous beams with GFRP reinforcement. The beams were loaded with concentrated forces in the midpoints of the spans and the deflection was measured in the midpoints of the spans.
Based on all of the above, it can be concluded that neural networks represent a reliable method for deflection estimation on GFRP-reinforced continuous beams under load with concentrated forces in the midpoints of the spans. 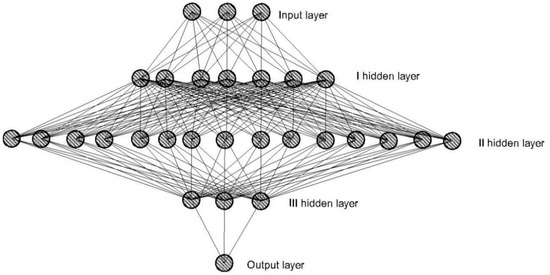 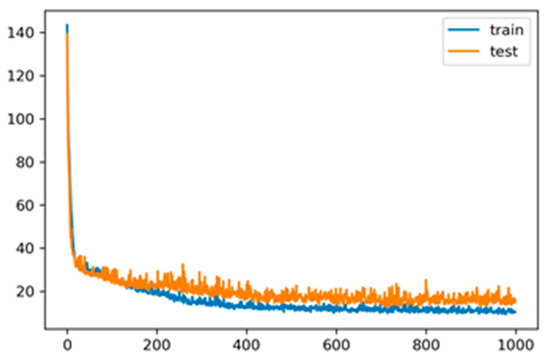 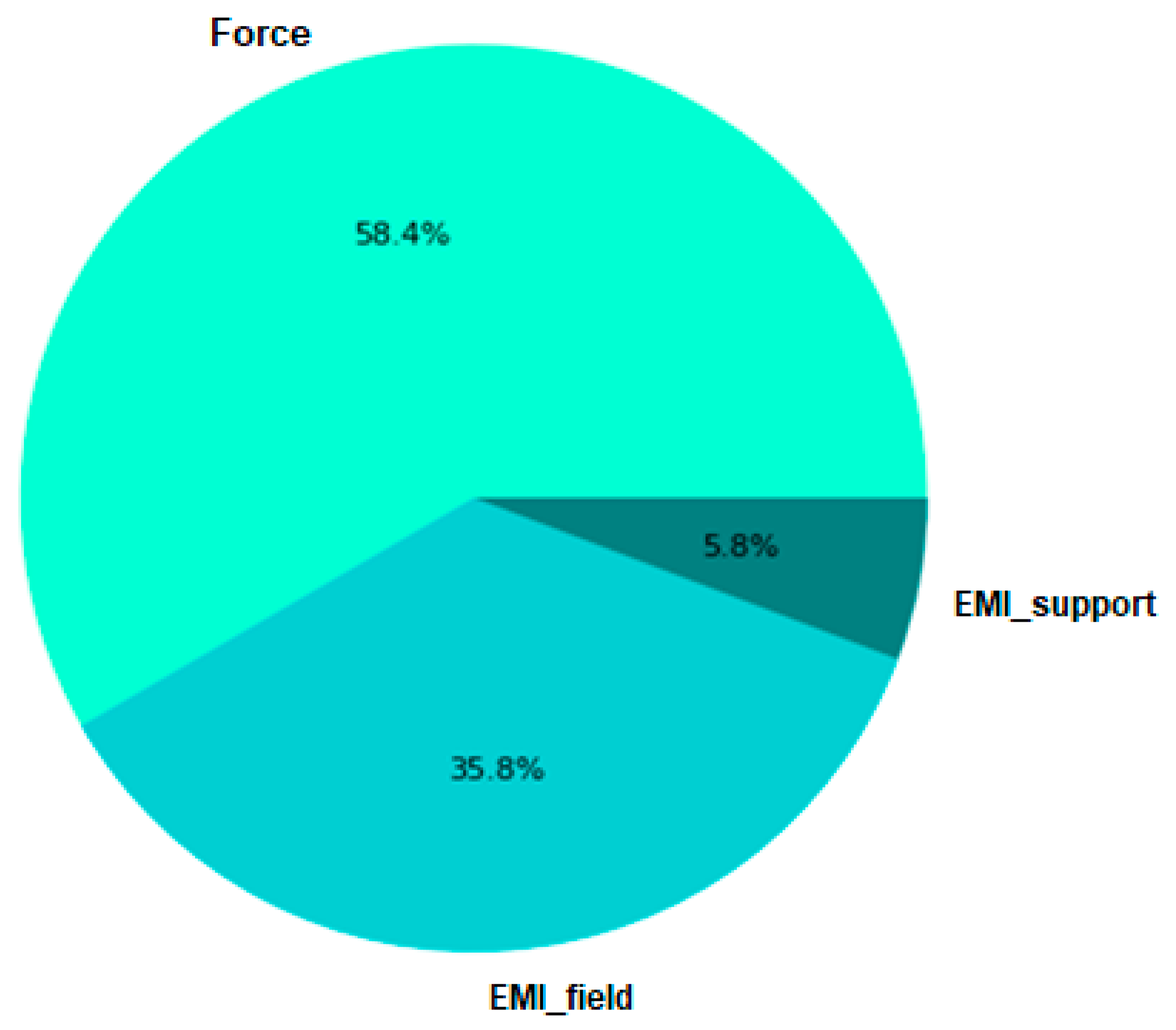