Ultrasound based elastography techniques can be applied to investigate a range of clinical scenarios, with several different technologies currently available on various commercial ultrasound systems. Shear Wave Elastography (SWE) involves the generation of shear waves propagating perpendicularly from the main axis of the ultrasound beam, the speed of which is linked to the tissue’s elastic modulus [1]. One technique [2-Dimensional Shear Wave Elastography (2D-SWE)], generates these shear waves by applying multiple transducer-generated acoustic force pulses to create a two-dimensional parametric colour map of tissue stiffness. The operator is then able to “sample” areas within this colour map using proprietary software to obtain quantitative measurements of tissue elasticity by measuring the shear wave velocity (SWV). An advantage of 2D-SWE is that the elasticity profile of a larger section of tissue can be evaluated with a single acquisition [2]. By measuring the velocity of these lateral shear waves and comparing measurements from normal and pathological tissue, researchers can detect or monitor disease progression [3,4,5,6,7,8].
Like other ultrasound-based quantitative techniques such as Doppler flow analysis, 2D-SWE is susceptible to measurement variability which is unrelated to intrinsic physiological conditions. SWV measurements can be influenced by variations in imaging conditions such as sampling depth [9], presence of acoustic artifacts [10] or operator relevant errors in technique [11]. In addition, the use of different elastography sono-platforms has also been shown to introduce considerable variability in measurements [12,13,14,15]. A reliable measurement is one in which the variability between repeated measurements remains within a clinically acceptable limit [16]. Such a limit provides confidence that measurements can differentiate between normal and pathological conditions. Although several studies have investigated the reliability of ultrasound derived elastography measurements [9,12,13,14,15,17,18,19], there is limited published data for 2D-SWE systems and a lack of universally agreed-upon reliability criteria for this system [20].
Modern 2D-SWE systems now incorporate software tools to assist operators to visually assess the stability of the acquired SWV and to inform them of the ideal placement of the sampling region of interest (ROI) box [21]. Alongside a 2D colour-coded map of tissue stiffness, a novel approach provided by some manufacturers is the addition of a “propagation contour map” (Figure 1), which uses a series of contour lines to depict shear wave arrival times at different anatomical points in the tissue being assessed [22,23]. Regions in the image displaying parallel contour lines indicate shear waves are propagating smoothly with minimum variability [21]. These two images provide complementary information designed to produce a visual indicator of the best acquisitions to select for quantitative analysis and to optimise the placement of the ROI sampling box in an area free of significant artefacts. Operators utilising 2D-SWE technology need to have confidence that any derived measurements are a true representation of the tissue being sampled and have a good understanding of the factors that can introduce variability. Thus allowing them to take steps to minimise these at the time of imaging.
This study aimed to investigate the reliability of a modern 2D-SWE system using a tissue-mimicking elastography phantom to identify the major causes of intra-system variability. The evaluation includes an analysis of the sources of SWV measurement variability, as they relate to imaging depth, target stiffness, sampling technique and the operator.

This study utilised a model 049A human tissue mimicking quality assurance elastography phantom produced by Computerized Imaging Reference Systems, Inc., Norfolk, VA, USA (CIRS) made from Zerdine®, a poly-acrylamide polymer [24] (Figure 2). This phantom has acoustic properties comparable to human tissue, with a reported acoustic velocity of 1540 m/s ± 10 m/s and an attenuation coefficient of 0.5 dB·cm−1·MHz−1 [25]. Zerdine® phantoms from CIRS have been validated and have demonstrated adequate homogeneity and low viscosity levels [9,18,26]. Other investigations using tissues mimicking phantoms have shown that ultrasound frequencies used in the MHz range can be translated in vivo [27,28].
The phantom contains a series of eight cylindrical tubes which taper from 16.7 mm to 1.6 mm at set intervals from one end of the phantom to the other. Each tube provides an imaging target containing one of four known elasticity values, Type 1 (10 kPa), Type II (17 kPa) Type III (47 kPa) and Type IV (85 kPa). These targets offer a range of elasticity values dependent on the clinical area of interest. Current machine dependent reference ranges for the liver, report values <7 kPa for normal tissue and >17 kPa for advanced fibrosis [2]. Elastography studies of the breast have demonstrated values between 30 and 50 kPa for normal parenchymal tissue and much higher values in malignant breast lesions [29]. The four targets are located at 3 cm and repeated at 6 cm depth. The background medium surrounding the targets can be sampled and has a known elasticity of 25 kPa. The largest diameter (16.7 mm) was chosen to limit the potential for shear wave refraction at the target boundary [30] and to accommodate the sampling ROI.
SWV measurements were performed using a Canon Aplio i-series 600 machine (Canon Medical, Otawara-shi, Japan) with a curved 8C1 probe. The system can make the conversion of SWV to Young’s modulus E (kPa) using the equation E = 3ρ(SWV)2. This equation assumes the tissue density is equal to water (ρ = 1 g/cm−3), and that the relationship between Young’s modulus and shear modulus (G) is E ≈ 3 G, which occurs for incompressible materials having a Poisson’s ratio of 0.5. Soft tissue is often regarded as incompressible [30]. In this study, we chose not to convert the machine measured values of SWV to kPa to focus on the sources of intra-system variability as they applied to SWV. Elastography guidelines recommend reporting values in SWV, as this is the quantity measured by the machine and the conversion to kPa relies on a range of assumptions, which can introduce additional errors [21,31].
Elastography samples were acquired using the system’s single-shot method, which activates a 2.5 MHz acoustic radiation force pulse over a single frame. SWV measurements were independently performed by 2 experienced Sonographers (CE and EC), each with over 15 years of ultrasound experience, and 1 less experienced practitioner (AJ) to evaluate the potential of a training effect.
To ensure the distribution of the sample means from each operator were approximately normally distributed and to conduct parametric tests, 30 consecutive SWV measurements were obtained from each phantom target and background [32]. SWV measurements were repeated at two available depths 3 cm and 6 cm. To remain consistent with published guidelines, a single circular ROI was utilised for sampling [33]. The mean SWV (metres/sec) was recorded using a ROI sampling size of 10 mm and repeated using a ROI size of 5 mm. Each operator utilised the on-system SWE measurement software and placed the ROI within each target. Using the wavefront visual propagation map, each operator then placed the sampling ROI in an area of the highest reliability.
The intervals between the contours on the visual propagation map are wider in regions where the shear waves travel faster and closer together when travelling slower (Figure 1). Areas of parallel contour lines represent areas in which shear waves propagate smoothly and indicate that the reliability of data acquisition in these areas is highest [8].
Statistical analysis was performed using IBM SPSS Statistics for Windows Version 26.0 (IBM Corp. Armonk, NY, USA, 2019). The independent samples t-test was used to compare means of SWV from the same target at the two different depths (3 cm and 6 cm) and the two sampling methods (ROI size; 5 mm and 10 mm) [34]. Homogeneity of variances was tested using Levene’s variance test [35]. Inter-operator agreement was calculated using an analysis of the Intraclass Correlation Coefficient (ICC) [35]. The ICC utilised a two-way random effects model and selection of absolute agreement between the operators [36]. The ICC values were classified according to the common criteria [37]: excellent (ICC > 0.75), fair to good (ICC 0.40–0.75) and poor (ICC < 0.40). The repeatability coefficient (RC) and coefficient of variation (CV) were used to assess, test and retest reliability [16]. The RC and CV were calculated independently for each operator to ensure the conditions between repeated measurements were the same [16]. The RC is the value below which the absolute differences between two measurements would lie with 0.95 probability [38] and can be calculated by the formula:
The CV is calculated as the ratio of the standard deviation (SD) to the mean, with a smaller percentage indicating less variability. The significance level was set at p ≤ 0.05.

This study demonstrated good reliability of 2D-SWE SWV measurements when imaging soft (10 kPa and 17 kPa) elastography phantom material. Higher SWV measurement variability was evident with increasing depth and stiffness of the phantom targets. The influence of the operator was minimal, and variations in sampling technique had little impact on the SWV for most targets. The reliability achieved in this study of the soft targets is encouraging and may assist the development of reliable imaging protocols for clinical practice when acquiring 2D-SWE measurements.

The 1st and 2nd authors are recipients of Mater Hospital–QUT research scholarship that assisted in the completion of this work.

The authors acknowledge the support during data collection by Ayaka Johnson. 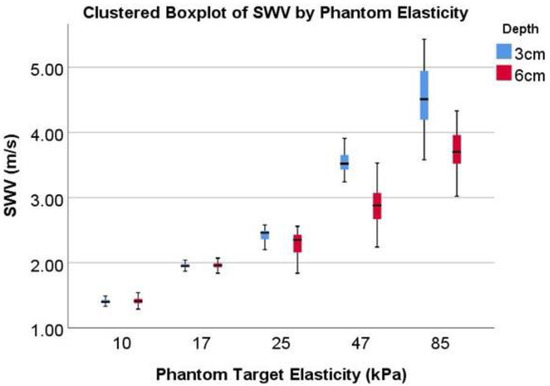