The purpose of this research was to investigate the effect of mechanical features and geometrical parameters on the stress–strain state of a cracked layered plate under pure bending (bending moments are uniformly distributed at infinity). The sixth-order bending problem of an infinite, symmetric, three-layer plate with two coaxial through cracks is considered under the assumption of no crack closure. By using complex potentials and methods of the theory of functions of a complex variable, the solution to the problem was obtained in the form of a singular integral equation. It is reduced to the system of linear algebraic equations and solved in a numerical manner by the mechanical quadrature method. The distributions of stresses and bending moments near the crack tips are shown. Numerical results are presented as graphical dependences of the reduced moment intensity factor on various problem parameters. In this particular case, the optimum ratio of layer thicknesses is determined.
Keywords: bending; layered plate; crack; complex potential; moment intensity factor bending; layered plate; crack; complex potential; moment intensity factor

Plate-shaped structures are widely used in engineering and are often operated under bending loads. Their destruction is largely caused by crack propagation, therefore, acquiring information about crack tip stresses under such conditions is very important.
Two-dimensional sixth-order plate theories are popular in the scientific community. They use simpler (compared to the three-dimensional theories) relations of the elasticity theory and at the same time, they allow one to take into account the plate thickness and material anisotropy. The results of the first investigations into the stress–strain state of cracked plates have been collected in the handbook [1]. The stress and displacement distribution near the crack tips are described in [2]. These, and most later published cracked plate bending investigations refer to homogeneous plates [3,4]. The bending of a homogeneous plate with coaxial cracks in terms of sixth-order theories has been investigated, for example, in [5,6,7]. Anisotropic and composite plates have not remained unheeded either. However, such investigations are mostly devoted to tensile loads [8], smooth-shaped cracks [9], anisotropic non-layered plates [10] and sandwich-structured non-cracked plates [11,12]. For plates with straight through cracks under bending load, the finite element method is usually used, for example [13]. Recently, new approaches have been proposed, for example, an energy-based modal decomposition method [14].
Analytical research of cracked layered plates in the frame of sixth-order theories was initiated by [15,16]. Models from these studies were adapted to the method of singular integral equations by [17].
Due to the lack of publicly available numerical and experimental research of the bending of layered plates with a system of through cracks, especially on the basis of refined theories, we decided to fill this gap, starting with a study of the effect of the presence of two coaxial cracks on the stress–strain state of the symmetric three-layer composite plate.
Mark meanings are listed in Table 1 to improve the understanding of the article by readers.

Consider an infinite, thin, three-layer plate of thickness . The plate has physical and geometrical symmetry about its middle plane. The origin of a chosen global Cartesian coordinate system is placed at the center of symmetry, the -plane coincides with the middle plane of the plate and the axis is directed along the downward vertical plane. The transverse isotropy of each layer is assumed (the planes of isotropy are parallel to the middle plane). The material of the outer layers is characterized by Young’s modulus , Poisson’s ratio in the plane of isotropy and the shear modulus in the transverse direction, the material of the inner layer—by , and , respectively. We also require the conditions of an ideal mechanical contact at the interfaces .
The plate contains two equal through coaxial cracks of length The centers (hereinafter ) of the cracks have the coordinates and are the origins of local Cartesian coordinate systems (see Figure 1).
Let us determine and compute the moment intensity factor under pure bending (bending moments are applied at infinity and there is no contact between the faces of cracks). The absence of contact can be ensured by tensile loads at infinity, the contribution of which to the stress state of the plate can be obtained from the known solution of the plane problem of the elasticity theory [18]. The solution to the given problem is a superposition of the solutions to the following two problems: bending of the solid plate and of the plate with cracks under the corresponding load applied to their faces. We restrict ourselves to the second one, the boundary conditions of which in local coordinate systems are as follows: where and are bending moments, twisting moments and shear forces, respectively; superscripts “+” and “−” stand for limits at .
According to [15], the through-the-thickness displacement variation in the -th layer can be expressed in the following form: where and are components of displacement vector; and are unknown functions; are odd functions which satisfy the condition and matching conditions for the displacements and shear stresses at the interfacial zones between layers and the additional condition
The stress distribution in the th layer is obtained by inserting (3) to the Hooke law: where
Instead of stress tensor components (6) we will use integral parameters of stress state (bending moments and twisting moment and shear forces and ) which are the following where
Suppose that is given by the following cubic polynomials:
The values of and are obtained from (4) and (5):
It is shown in [13] that following equations take place where is a Laplace operator, .
Represent in terms of analytical functions and by the Goursat′s formula Therefore, from (10) we obtain , where Taking into account (8) and (9), the integral parameters (7) can be written as follows where
Using the approach from [5], represent and in the form where hereinafter is the Macdonald function of th order, is an unknown real-valued function.
By introducing the new functions and using (13) we rewrite (11) and (12) as follows: where
Functions and have the following properties:
Taking into account (14)–(16) from the boundary conditions (1), we obtain a linear conjunction problem
Problem (17) has the solution
Satisfying conditions (1), we conclude that .
Taking into account (14), (15), (18) and the symmetry of the problem, and satisfying the boundary conditions (2), leads to the following singular integral equation in an unknown function . with kernel where
Equation (19) must be solved under the additional condition which ensures that displacements are single-valued when bypassing the contours of cracks.
Bending moment intensity factors are defined as where signs “+” and “” correspond to crack tips and respectively.
Distributions of bending moments, twisting moment, shear forces and stresses in the th layer near the crack tip are [15]: where are polar coordinates that originate at the crack tip.

The system of integral Equations (19) and (20) is solved in a numerical manner, with the help of the mechanical quadrature method [18] of and for various values of and The nodal values of the sought-for function at zeros of the first kind Chebyshev polynomials, as solutions to system of linear equations, are obtained using Python′s NumPy library (the solve method from the linalg module). The bending moment intensity factor (21) is calculated for one of the two cracks from the formula where —number of nodes in mechanical quadrature method,
Figure 2, Figure 3 and Figure 4 illustrate the graphical dependences of the reduced moment intensity factor for the inner crack tip on various geometrical and mechanical parameters, where is defined by (22). Python′s matplotlib library is used to visualize the data. Values of the moment intensity factor for the outer crack tip are not shown because they are always smaller than corresponding values for the inner crack tip. That is, crack propagation occurs first towards each other.
All the calculations are carried out with an absolute error not exceeding 0.0001. The accuracy was checked by comparing the results for N and 2N nodes of the mechanical quadrature method.

From Figure 3 and Figure 4 it follows that the dependences of the bending moment intensity factor on the geometrical parameters have the same character as for the single-layer plate [1,5]. Therefore, a layered plate with two coaxial cracks under pure bending is weaker than the same plate with one crack.
Figure 2 indicates that the plates for which the shear modulus in transverse direction of inner layer is greater than the one of outer layers, are stronger. It is also possible to obtain the optimum ratio of layer thicknesses (in our calculated case it is ), at which the bending moment intensity factor is the lowest.
Note that in the partial cases (materials of all layers are the same, infinite distance between the crack tips, infinitely thin plate) obtained values of the reduced bending moment intensity factor are the same as in [1,5,15].
Built dependencies allow us to make recommendations on the optimum structure of plate construction units and indicate the bending modes of their safe operation. 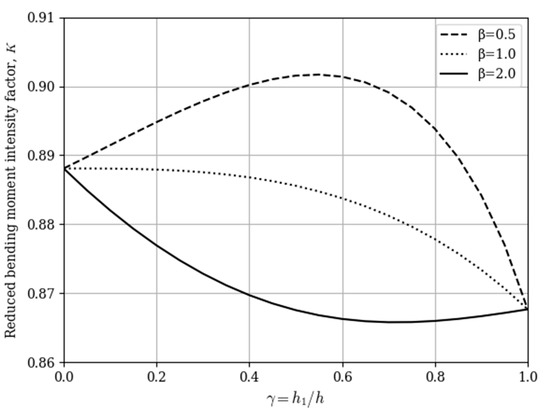 Table 1. Mark meanings.
Table 1. Mark meanings.
© 2021 by the authors. Licensee MDPI, Basel, Switzerland. This article is an open access article distributed under the terms and conditions of the Creative Commons Attribution (CC BY) license (http://creativecommons.org/licenses/by/4.0/).
We use cookies on our website to ensure you get the best experience. Read more about our cookies here.
Accept
We have just recently launched a new version of our website. Help us to further improve by taking part in this short 5 minute survey here. here.
Never show this again