Similar Outcomes and Satisfaction of the Proprioceptive versus Standard Training on the Knee Function and Proprioception, Following the Anterior Cruciate Ligament Reconstruction
Previous Article in Journal

Purpose: The purpose was to determine the impact of the size of bone bruises (BBs) on bone tunnel enlargement (BTE) occurrence. Materials and methods: Twenty-four (24) patients who underwent anterior cruciate ligament reconstruction (ACLR) were included in this retrospective study. The measurements of BBs based on the initial MRI scan, bone tunnel size based on the control MRI scan, and the spatial determination of BB in relation to the bone tunnel location were evaluated. To analyze the relationship between BBs and BTE in homogeneous groups regarding the time from injury to ACLR (t(I-S)), the largest subgroup B (n = 15), in which t(I-S) was 31 to 60 days, was isolated for further investigation. Results: Based on subgroup B, a weak correlation (r = 0.33) existed between the BB volume and BTE size in the femur and tibia. Considering the relationship between the distance from the BB to the bone tunnel in the femur (f-l) and its enlargement (Δfd), there was a moderate and statistically significant (p < 0.05) negative correlation (r = −0.64). The correlation between those parameters was even stronger (r = −0.77) in subgroup B (time interval between injury and surgery ranged from 31 to 60 days). Conclusions: A retrospective analysis of MRI data in patients after ACL reconstruction surgery showed a relevant association between the distance from the BB to the bone tunnel and BTE in the femur. The relationship was not confirmed in the tibia. View Full-Text
Keywords: bone bruises; anterior cruciate ligament reconstruction; bone tunnel enlargement bone bruises; anterior cruciate ligament reconstruction; bone tunnel enlargement
►▼ Show Figures 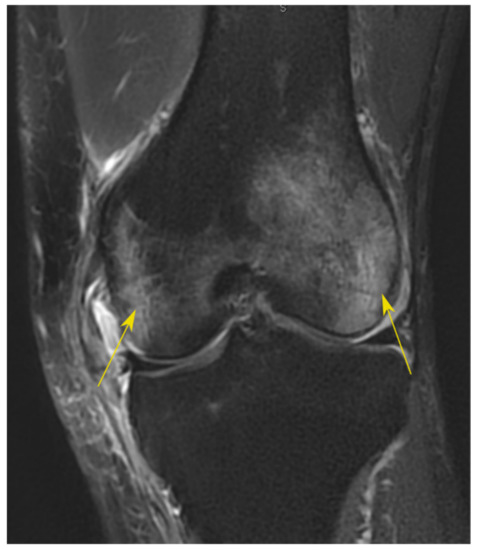