Investigation of Geological Structures Using UAV Lidar and Its Effects on the Failure Mechanism of Deep-Seated Landslide in Lantai Area, Taiwan

The area of Taiwan is 70% hillsides. In addition, the topography fluctuates wildly, and it is active in earthquakes and young orogenic movements. Landslides are a widespread disaster in Taiwan. However, landslides are not a disaster until someone enters the mountain area for development. Therefore, landslide displacement monitoring is the primary task of this study. Potential landslide areas with mostly slate geological conditions were selected as candidate sites in this study. The slate bedding in this area is approximately 30 to 75 degrees toward the southeast, which means that creep may occur due to gravity deformation caused by high-angle rock formation strikes. In addition, because the research site is located in a densely vegetated area, the data noise is very high, and it is not easy to obtain good results. This study chose ESA Sentinel-1 data for analysis and 1-m LiDAR DEM as reference elevation. The 1-m LiDAR DEM with high accuracy can help to detect more complex deformation from DInSAR. The Sentinel-1 series of satellites have a regular revisit period. In addition, the farm areas of roads, bridges, and buildings in the study area provided enough reflections to produce good coherence. Sentinel-1 images from March 2017 to June 2021 were analyzed, obtaining slope deformation and converting it to the vertical direction. Deformation derived from SAR is compared with other measurements, including GNSS and underground slope inclinometer. The SBAS solution process provides more DInSAR pairs to overcome the problem of tremendous noise and has increased accuracy. Moreover, the SBAS method’s parameter modification derives more candidate points in the vegetated area. The vertical deformation comparison between the GNSS installation location and the ascending SBAS solution’s vertical deformation is consistent. Moreover, the reliable facing of the slope toward the SAR satellite is discussed. Due to the limitations of the GNSS stations, this study proposes a method to convert the observed deformation from the slope inclinometer and convert it to vertical deformation. The displacement of the slope indicator is originally a horizontal displacement. It is assumed that it is fixed at the farthest underground, and the bottom-to-top movement is integrated with depth. The results show that the proposed equation to convert horizontal to vertical displacement fits well in this condition. The activity of landslides within the LiDAR digital elevation model identified as scars is also mapped. View Full-Text
Keywords: landslide mapping; GNSS; active landslide landslide mapping; GNSS; active landslide
►▼ Show Figures 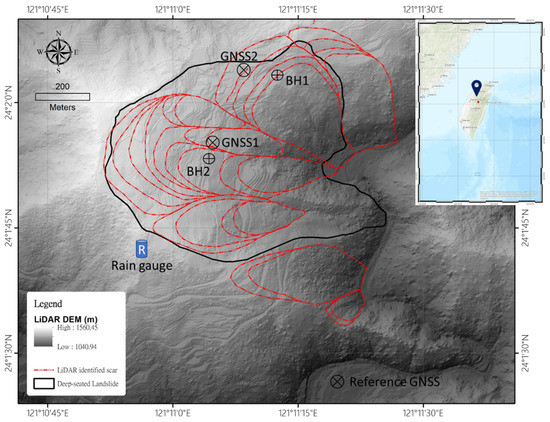