Applications of Magnesium and Its Alloys: A Review
Previous Article in Special Issue

Spanish Poplar Biomass as a Precursor for Nanocellulose Extraction

The effect of acidic hydrolysis duration on nanocellulose size, morphology, and proper ties was investigated, which opens up a whole new horizon of versatility in poplar applications. This study aimed to examine Spanish poplar wastes as raw material to extract crystalline nanocellulose (CNC), which substantiates the importance of poplar wastes. Wastes were pulped using 1 L of 10% NaOH (wt./wt.) solution, and bleached several times by NaClO2; afterwards, white wastes were subjected to acidic hydrolysis by 60% H2SO4 for either 5, 10, or 15 min. Microcrystalline cellulose (MCC) underwent a similar hydrolysis protocol as poplar as control. TEM, IR, and XRD characterization techniques were performed. Poplar based nanocellulose sized 219 nm length and 69 nm width after 15 min acidic hydrolysis. MCC yielded 122 nm length and 12 nm width crystals after 10 min acidic hydrolysis. Hydrolysis resulted in a drastic change and intense peaks at 3500 and 2900 cm−1 for nanocellulose. Although pre-hydrolysis fiber treatment was not influencial on the crystallinity of poplar, acidic hydrolysis remarkably raised the crystallinity index (CI) by 7–8%. The more hydrolysis duration was prolonged, the size of the resulting crystal (whisker) decreased, and the aspect ratio increased. Hydrolysis was more impactful on MCC than poplar. However, for future work, it seems that longer duration of pulping and bleaching could have significantly removed unwanted components (hemicellulose and lignin), showcased in IR and XRD, and hence smoothened the following hydrolysis. View Full-Text
Keywords: bioresources; biomaterials; nanocellulose; residues; valorization; acidic hydrolysis bioresources; biomaterials; nanocellulose; residues; valorization; acidic hydrolysis
►▼ Show Figures 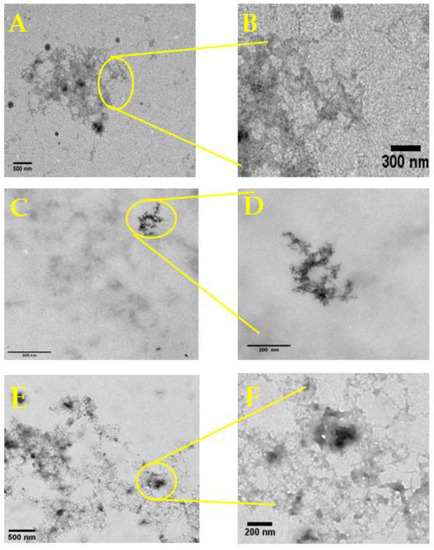