Numerous hydrogels made of poly-γ-glutamic acid (γ-PGA) and various cross-linkers have been explored, but only limited data on hydrogels made of γ-PGA and poly(ethylene glycol) (PEG) are available. In this study, γ-PGA, a biodegradable and edible biopolyamide, was successfully cross-linked with selected PEGs to obtain a series of hydrogels. The swelling behaviour of these hydrogels was investigated under various pH conditions. It was also found that the structure of the cross-linker (linear or branched) affected the hydrogels’ swelling behaviour. In addition, in disc diffusion assay, hydrogel discs loaded with antibiotic were tested against Staphylococcus aureus and Escherichia coli. Prolonged activity of hydrogels loaded with antibiotics in comparison to paper discs containing antibiotics was observed. Moreover, the protective effect of hydrogels on entrapped probiotic cells subjected to low pH was investigated. The hydrogel swelling ratio and amount influenced the survival rate of the protected bacteria. Considering potential biomedical applications of hydrogels, cytotoxicity was evaluated towards two cell lines, MSTO and PANC 1. View Full-Text
Keywords: hydrogels; poly-γ-glutamic acid; poly(ethylene glycol); probiotics hydrogels; poly-γ-glutamic acid; poly(ethylene glycol); probiotics
►▼ Show Figures 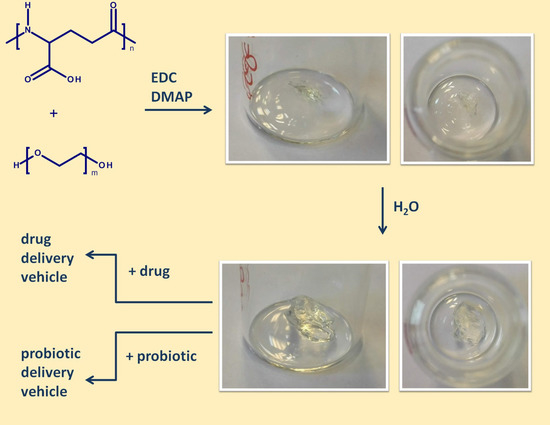 
Kwiecień I, Niewolik D, Ekere AI, Gupta A, Radecka I. Synthesis of Hydrogels Made of Poly-γ-Glutamic Acid (γ-PGA) for Potential Applications as Probiotic-Delivery Vehicles. Applied Sciences. 2020; 10(8):2787.