Neurons are viewed as the basic cells that process and transmit information. Trees and neurons share a similar structure and neurotransmitter-like substances. No evidence for structures such as neurons, synapses, or a brain has been found inside plants. Consequently, the ability of a network of trees to process information in a method similar to that of a neural network and to make decisions regarding the usage of resources is unperceived. We show that the network between trees is used for knowledge processing to implement decisions that prioritize the forest over a single tree regarding forest use and optimization of resources, similar to the processes of a biological neural network. We found that when there is resection of a network of trees in a forest, namely a trail, each network part will try optimizing its overall access to light resources, represented by canopy tree coverage, independently. This was analyzed in 323 forests in different locations across the US where forest resection is performed by trails. Our results demonstrate that neuron-like relations can occur in a forest knowledge processing system. We anticipate that other systems exist in nature where the basic knowledge processing for resource usage is performed by components other than neurons.
Keywords: knowledge processing; trees; neuron activity; forest network knowledge processing; trees; neuron activity; forest network

Neurons are viewed as the basic cells that process and transmit information. Trees and neurons share similar structure and neurotransmitter-like substances [1,2]. No evidence for structures such as neurons, synapses, or a brain has been found inside plants [3]. Signal processing by trees has been known since Salix sitchensis trees were found to be sensitive to and respond to signals generated by trees attacked by tent caterpillars and webworms [4]. Interplant communication can occur from leaves of one species of plant to leaves of another species to activate the expression of defensive genes [5]. N-(17-hydroxylinolenoyl)-L-glutamine was found to be a key compound in communication between leaves of corn seedlings eaten by beet armyworms and in calls for help to the enemy of their enemy, parasitic wasps [6]. Furthermore, species in ecological communities show the ability to build complex webs of communication based on plant fungus [7,8].
Communication of plants through airborne signals has been analyzed [9,10]. In addition, plants have memory defined by reversible changes in behavior (plasticity) that has been altered by experience [11]. Previous work has shown changes in neural substrates of memory [12] based on predictions of rewarding events using adaptive optimization control [13]. However, there is a lack of knowledge about the mechanisms that lead to plant communication that are beneficial for both plant emitter and receiver [10].
A roadmap towards a functional paradigm for learning and memory in plants has been proposed [14]. From the seven requirements proposed to substantiate plant learning and memory, one aspect included information processing which was in initial stages and needed additional clarification. Another requirement aspect proposed was independent internal representation, which is currently theoretical and needs further investigation. Here, instead of viewing each plant as an independent mechanism, we view the forest as a system that is processing information and has representation of the knowledge being processed.
We show how viewing a forest as a network rather than as separate tree entities can help explain the benefit of communication as resource optimization. It is suggested that each tree’s goal of survival is directed by the forest trying to optimize its resources, which in our case is access to sunlight. Comparison of a forest network to a neural network shows interesting similarities in both the physical structure and some of the functional properties of both networks.
We define Knowledge Processing as the analysis of information intended to try to optimize the use of available resources. Animals are viewed as having the ability to process knowledge at different levels in order to use their available resources. To bypass the philosophical argument of whether animals or trees “think”, we analyze the use of resources needed to survive. In the case of animals, neuron brain activity allows the processing of the knowledge of available resources. Since trees lack neurons but can build a communication network [15], their use of the resources required for survival, including light, nutrients, and water, can be analyzed. We chose to analyze the communication between trees in a forest that tries to optimize the use of light.
The analysis is inspired by epilepsy resection, the action performed on neurons when they exhibit high neuron activity. In epilepsy resection, a part of the brain, a set of neurons, is removed to allow the neurons residing in the surrounding area to become less active and resume normal neuron activity [16]. Here we try to imitate the idea behind this procedure and look at forests where a section of trees has been removed. The idea is that resection causes nearby neurons (trees) to become less active, or rather, less efficient at processing knowledge. This means “resume normal activity” in hyper-acting neurons, but “falls down to abnormal activity” in trees. We analyze trees on both sides of an area in the forest which was “surgically” removed by humans—a trail. We look at the behavior of trees and analyze the change of the use of light as the distance from the trails increases.
When the forest canopy increases near the resection, it increases logarithmically as the distance from the resection increases. Some exceptions to this phenomenon showed forest structure similar to the neuron semi-sphere shape proliferate structure occurring in brain tumors. The results show that neuron-like relations can occur in a forest knowledge processing system.
The similarity between human neurons transmitting knowledge and forest trees transmitting knowledge can be seen from the network structure and the network behavior. The ability to process the knowledge regarding the available resources while optimizing their use appears to be similar. Furthermore, each processing unit, neuron or tree, seems to prioritize the resource needs of the network rather than its own needs.
The importance of the results is in the ability to analyze neuron-like behavior in an environment which processes knowledge much slower than human neurons. The forest environment, representing nature-inspired knowledge processing, has similar characteristics to brain neuron processing but is easier to manipulate and control.

ArcGIS [17], a spatial analysis tool, was used for canopy coverage and distance from trail calculations. The set of sampled points representing changes in landscape was used to observe the continuity and variability of the data across a surface using interpolation tools. Deterministic and geo-statistical techniques were used for interpolation. Inverse Distance Weight (IDW) and Spline are deterministic techniques based on the extent of similarity of cells. Kriging is a geo-statistical interpolation technique.
IDW is based on a linear weighted combination of a sample of points. The weight is assigned as a descending function when the distance of the input point to the cell location is growing.
is the predicted value for given location . is the number of measured points near the predicted location. are weights assigned to each measured point used. The weights value decreases as the distance increases. is the measured value at location .
As distance increases, the weight is reduced by a factor of p. is the distance between prediction location and each measured location . The optimal value is determined by minimizing the root-mean square prediction error (RMSPE). The RMSPE is the statistic that is calculated from cross-validation where each measured point is removed and compared to the predicted value of the location. The IDW aims at identifying the value that produces the minimum RMSPE.
Kriging performs statistical interpolation by fitting a function to a specified number of points with a specified radius to determine the output value for each location. Kriging provides information on the spatial autocorrelation of the dataset, the forest canopy coverage. We use the spatial resolution of a 30 m2 cell covered by tree canopy. Fitting and loss of tree canopy coverage values were produced using a Random Forests regression. It assumes the distance between sample points reflects a spatial correlation that explains the variation in the surface. where is the value for location , is the deterministic trend, and are the random correlated errors. representing the second-order polynomial trend surface linear regression on x and y coordinates.
Spline estimates values by minimizing the overall surface curvature. This is based on a smooth surface that passes through the input points.

An additional interesting increase in canopy coverage that is inconsistent with the distance from the trail resection is due to mountain rock or land formation (3 cases). The tree formation in these cases seems to be concentrated in specific spherical areas, with few trees in the surrounding circumference. For a forest in growth distress, the land formation limiting forest growth can be compared to brain cancer (Figure 3). The trees form a spherical canopy growth pattern (Figure 3A–E), which displays some similarities to neurons in a brain tumor [23,24].
We show that when resection of forests occurs, each part of the forest tries to optimize its light resources, measured by canopy coverage independently. Therefore, the forests can be viewed as a knowledge processing network as opposed to just a communication network. The trees in the forest attempt to maximize their use of resources; in our case, only the resource of light was analyzed. The knowledge processing network of trees in the forest resembles the activity of neurons working in the brain system. Other resource usage of trees can be analyzed to examine whether the use of nutrients and water also involves a neural network like pattern. Furthermore, knowledge processing without neurons might appear in other systems in nature. 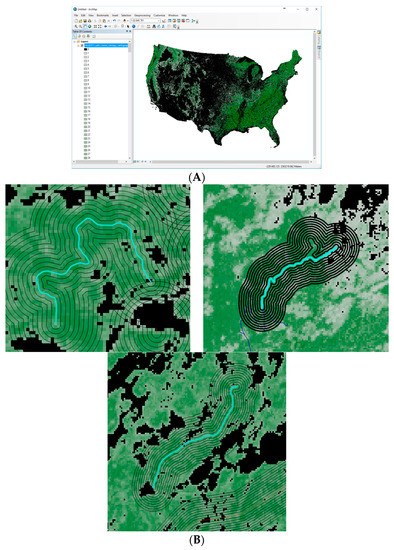 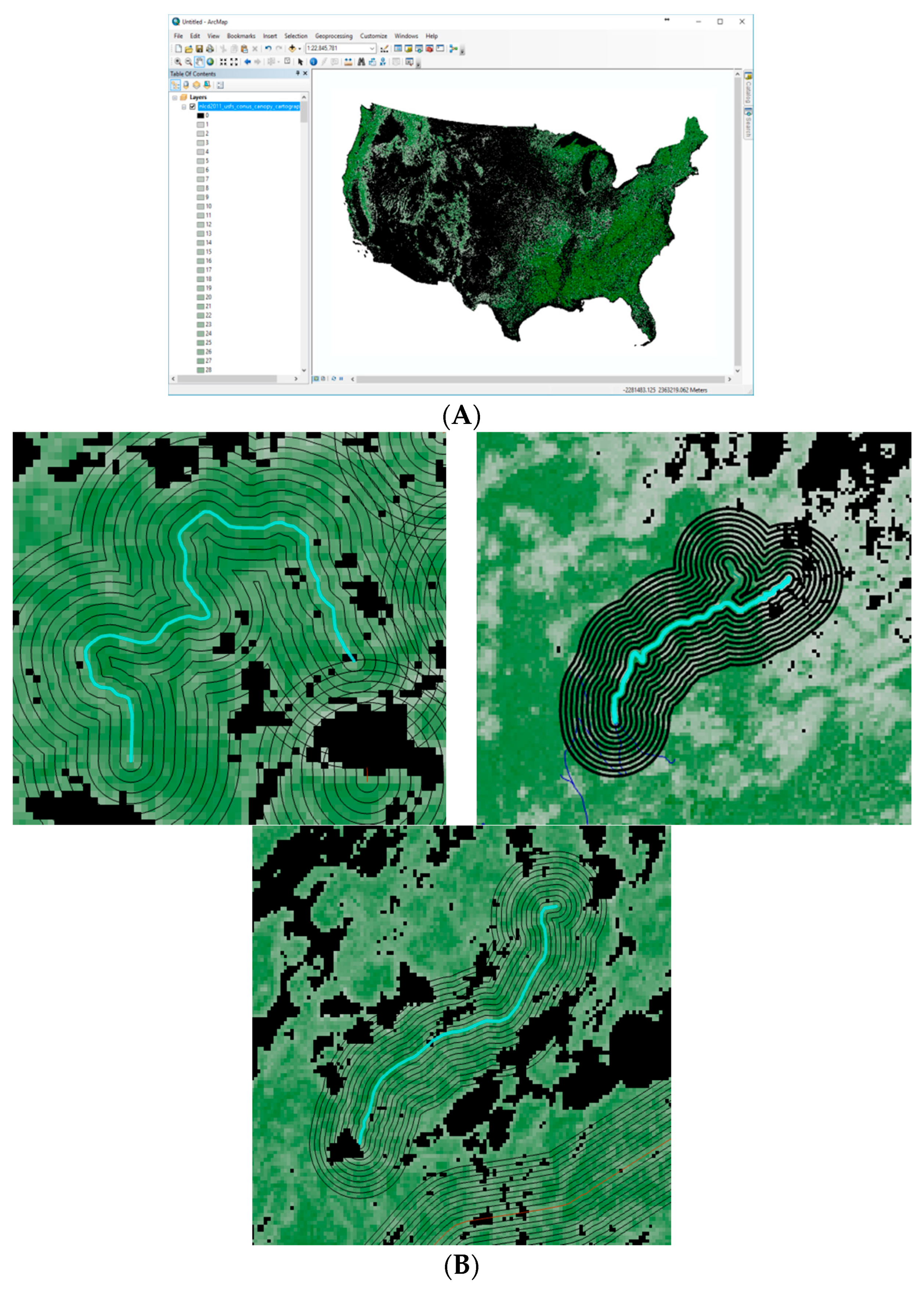 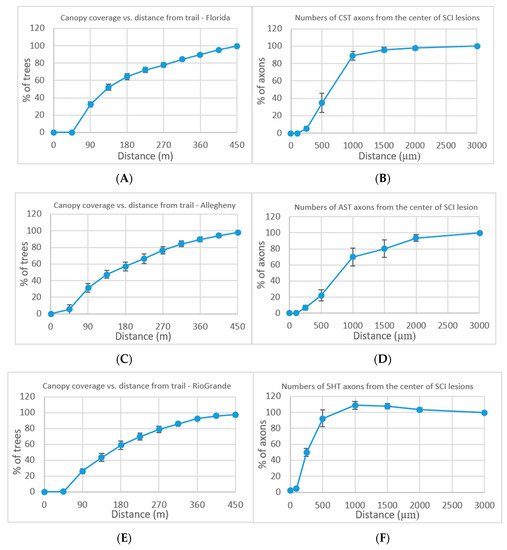