Bamano, King Creole, Sugarland, and DulceMiel hybrid tomato cultivars have been recently introduced in the Lazio area (Central Italy) to expand and valorize the regional/national market. Tomatoes from these cultivars, together with tomatoes from the native Fiaschetta cultivar, were sampled at the proper ripening time for the fresh market and characterized to obtain and compare their metabolite profiles. The Bligh–Dyer extraction protocol was carried out, and the resulting organic and hydroalcoholic fractions were analyzed by high-field Nuclear Magnetic Resonance (NMR) spectroscopy. NMR data relative to quantified metabolites (sugars, amino acids, organic acids, sterols, and fatty acids) allowed to point out similarities and differences among cultivars. DulceMiel hybrid and Fiaschetta native cultivars showed some common aspects having the highest levels of the most abundant amino acids as well as comparable amounts of organic acids, amino acids, stigmasterol, and linoleic and linolenic acids. However, DulceMiel turned out to have higher levels of glucose, fructose, and galactose with respect to Fiaschetta, reflecting the particular taste of the DulceMiel product. King Creole, Bamano, and Sugarland hybrid cultivars were generally characterized by the lowest content of amino acids and organic acids. King Creole showed the highest content of malic acid, whereas Bamano was characterized by the highest levels of glucose and fructose. View Full-Text
Keywords: hybrid tomato; 1H-NMR; metabolic profile hybrid tomato; 1H-NMR; metabolic profile
►▼ Show Figures 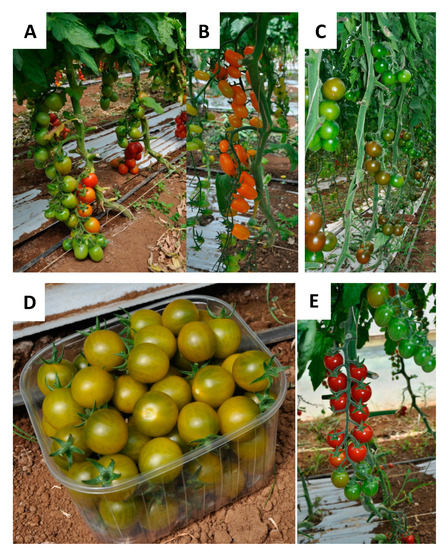