Many bridges serve under harsh environmental and mechanical loading conditions. Due to population growth and urbanization, traffic flow has increased substantially over the last few decades, while vehicle loads have gradually increased. Accordingly, many bridges have become structurally deficient or obsolete [1]. Thus, deploying various strengthening schemes to extend the service life of bridges has attracted greater interest [2] and has become a major challenge for modern civil engineering [3].
Owing to simple construction and relatively lower cost, T-section beams have been extensively used in highway bridges around the world. In service, such T-section beams can be subjected to chloride ions ingress, carbonization and moisture intrusion, ultimately causing corrosion of the reinforcing steel, cracking, spalling and delamination. Such damage mechanisms compromise the load carrying capacity of the T-section beams and shortening the service life of the bridge. Previous studies indicated that strengthening these T-section beams is generally more economical and sustainable compared to its replacement [4]. Thus, strengthening T-section beams has become a primary concern in improving the structural performances of bridges with T-section beams.
In recent years, using fiber-reinforced polymer (FRP) materials for strengthening concrete structures experienced very rapid growth around the world [5], particularly in cases of design code changes, deficient design, construction flaws, or structural degradation due to environmental exposure, natural hazards or excessive loading [6]. Externally bonded FRP reinforcement has proven especially effective for strengthening RC beams owing to its light-weight, excellent durability, and rapid installation. Yet, premature failure for instance due de-bonding can limit the system effectiveness, leading to possible brittle modes that can deter designers from exploring the full potential of this material [7].
In FRP-strengthened beams, failure may occur due to beam shear, flexural compression, FRP rupture, FRP debonding, or concrete cover ripping [8,9]. CFRP was used for strengthening RC structures in lieu of traditional steel plate strengthening techniques. For instance, Badawi et al. [10] and Al-Mahmoud et al. [11] studied the flexural strength of RC beams with prestressed CFRP rods experimentally and analytically. Yost et al. [12] reported experimental studies on the flexural behavior of RC beams strengthened by CFRP strips. Bilotta et al. [13], Barros and Fortes [14] and Nanni et al. [15] investigated the flexural and shear strength of beams or girders strengthened with CFRP. Most existing experimental and analytical studies focused on the structural performance of RC members with externally bonded CFRP sheets or strips. However, there is currently little published work on the anchoring for RC T-Section beams strengthened with CFRP sheets, along with a lack of studies on the influence of CFRP U-wrap spacing on anchorage and mechanical properties. Comparative studies on the bonding efficiency of this strengthening technique are still limited. Additionally, rational and accurate analytical models considering the above parameters are scarce.
The present study reports the findings of a test program on eight RC T-section beams reinforced with CFRP sheets tested to failure under two-point loading. The flexural performance of the T-section beams is explored, and the effects of influential parameters, including concrete compressive strength, reinforcing steel ratio, thickness of the strengthening material, and spacing of the strengthening U-wraps are discussed and analyzed. Based on the test results, a predictive analytical model was developed and recommendations for selection of CFRP sheets on T-section beams are formulated.

There is currently dearth of published research on the anchoring of CFRP sheets used to strengthen RC T-Section beams, along with lack of studies on the influence of CFRP U-wrap spacing and other key parameters on anchorage and overall mechanical properties. Comparative studies on the bonding efficiency of this strengthening technique are still limited. Additionally, rational and accurate analytical models considering the key influential parameters are still scarce. In this study, this knowledge gap is addressed via testing eight RC T-section beam specimens strengthened with externally bonded CFRP sheets. The experimental findings on the failure mode, cracking resistance, yielding and ultimate capacity, and on the effects of U-wrap spacing, flexural reinforcing ratio, and concrete compressive strength on the flexural behavior of the CFRP strengthened RC T-section beams should guide the practical retrofitting of such beams in the large portfolio of ageing bridges. The new analytical models developed to predict the cracking, yielding and ultimate load resistance of the RC T-section beams strengthened with CFRP sheets should provide a useful tool with adequate predictive accuracy to help engineers design suitable retrofit schemes for such beams.

The materials used in this test program include CFRP sheets, C20 and C40 normal-weight portland cement concrete, Ø8 mm HPB235 shear reinforcement, Ø12 mm and Ø14 mm flexural reinforcement, JGJ-20 adhesive. The used CFRP is TORAY-T700-12K type CFRP with thickness of 0.167 mm. All tested RC beams were cast at the same time. The compressive strength of two grades of concrete C20 and C40 were 21.3 MPa and 42.7 MPa, as determined by on cubic samples at the age of 28 days. Table 1 summarizes the details of the tested T-section beam specimens. Both C20 and C40 concrete was used to study the influence of the concrete compressive strength on the anchorage performance of CFRP Sheets. Moreover, the reinforcement ratio was 0.95% and 1.29% to gain insight into its effect on the reinforcing efficiency of CFRP sheets. Single and double CFRP layers were used to explore the influence of the bonding layers on the anchorage performance of CFRP sheets. Furthermore, the CFRP U-wrap spacing was 100 mm and 150 mm to investigate its effect on the anchorage of CFRP sheets. Table 2 lists the mechanical properties of the materials used in this test program, while Table 3 lists the mechanical properties of the CFRP and adhesive. Eight T-section beam specimens were prepared in this test program, measuring 90 × 290 × 2100 mm in web-width, depth, and length, respectively. The thickness and width of the flange of the T-section beam were 60 mm and 400 mm, respectively. The CFRP sheets were attached to the bottom of the T-section beams by JGJ-20 type constructional adhesive material. Three specimens (B1, B2 and B3) were not strengthened, while five specimens (C1 to C5) were strengthened using surface bonded CFRP sheets. Ø12 mm HRB335 hot rolled steel rebar was used as compressive reinforcement. Ø12 mm and Ø14 mm HRB335 hot rolled steel rebar was used as tensile reinforcement, representing flexural reinforcing ratios of 0.95% and 1.29%, respectively. The shear reinforcement adopted Ø8 mm HPB235 hot rolled steel reinforcement. Figure 1a shows the reinforcement details for the T-section beams. CFRP sheets were first installed at the bottom surface of the T-section beams, then CFRP U-wraps sheets were attached to the T-section beams using epoxy cohesive. Figure 1b illustrates the layout of U-wraps along the length of the beam. Figure 1c displays the size of the cross-section of the T-section beams. The main parameters studied were the compressive strength of concrete, reinforcing ratio, layers of the CFRP strengthening, and spacing of CFRP U-wraps.

Figure 3 shows the load versus central deflection curves for the tested RC T-section beam specimens strengthened by CFRP sheets. It can be observed that there are three stages. The first is the elastic stage that started with initial loading until the first crack developed in the bottom tensile fiber at mid-span. The resistance of the T-section beam corresponds to the concrete cracking is denoted Pcr (Figure 3a). Subsequently, in the stage II, the applied load was redistributed. Both strains in the main flexural reinforcement and CFRP sheet increased rapidly. At the end of this stage, the RC T-section beam behaved elastically and reached it yield strength, Py (Figure 3a). Pcr was improved significantly when bonding layers increased. However, it showed obvious brittle failure (Figure 3a,b). Figure 4a,b illustrate the strain versus resistance curves of the main flexural reinforcement and CFRP sheet at mid-span, respectively. It can be observed that the flexural reinforcement reached its yielding strain. The stiffness of the beam in stage II was smaller than that in stage I due to flexural cracking of the T-section beam. Figure 5a–f display the observed cracks due to the flexural bending moment. In stage III, there were two distinct structural behaviors for the tested specimens. Beams B1~B3 exhibited ductile behavior, whilst the T-section beams strengthened with CFRP sheets exhibited sudden drop in P-δ curves as shown in Figure 3. This implies that different types of failure modes occurred in the test specimens with and without CFRP-strengthening.

The cracking resistance Pcr, resistance corresponding to steel yielding Py, and ultimate resistance Pu of the tested T-section beams could be determined from P-δ curves of beams as shown in Figure 3. Table 1 lists the Pcr, Py, and Pu values and the corresponding failure mode for each of the tested 8 T-section beam specimens. Based on the P-δ curves and load-strain curves of the main steel reinforcement and CFRP, two distinct failure modes were observed. The first is a flexural mode that occurred in beams B1~B3, which was characterized by: (1) strength hardening plateau of the P-δ curves; (2) yielding of the bottom steel reinforcement at final failure (Figure 4a); and (3) flexural cracks at the pure bending region in the T-section beam (Figure 5). The combined flexural failure and CFRP-concrete debonding failure occurred in beams C1~C5 at final failure stage. This was accompanied by: (1) much smaller strains of about 6000μ in the CFRP than failure strain of 13090μ, which implies that the CFRP did not fail in tension; (2) yielding of the bottom steel reinforcement at final failure (Figure 4a); and (3) step drops in the P-δ curves of specimens C1~C5. Pcr and Py increased significantly when bonding layers increased (C4) or the reinforcement ratio increased (C3). However, peeling failure often occurred when there was excessive bonding of FRP.The peeling of the CFRP from the bottom of the T-section beam specimens was evident in C4 (Figure 5).

This paper reports experimental results on the flexural behavior of RC T-section beams strengthened by CFRP sheets and proposes new analytical models to predict its behavior. Based on the test results, the failure mechanisms were analyzed, and the effects of various parameters were discussed. Robust analytical models were developed to predict the cracking resistance Pcr, yielding resistance Py, and ultimate resistance Pu of the T-section beams strengthened by CFRP. Model accuracy was verified though validation against the experimental data. Based on the experimental and analytical study, the following conclusions can be drawn;

The authors have no conflict of interest related to this research publication. 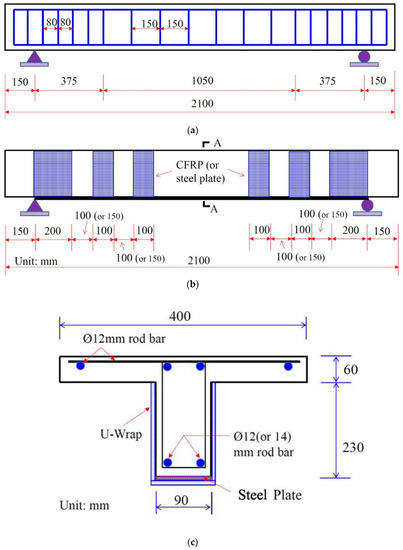 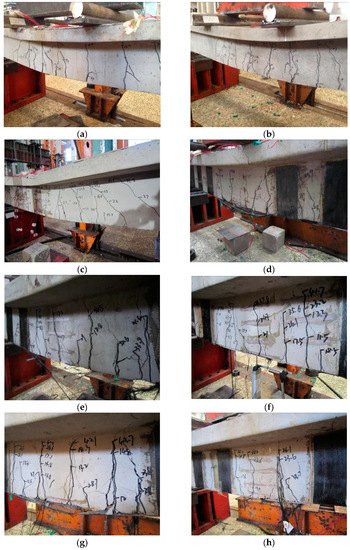 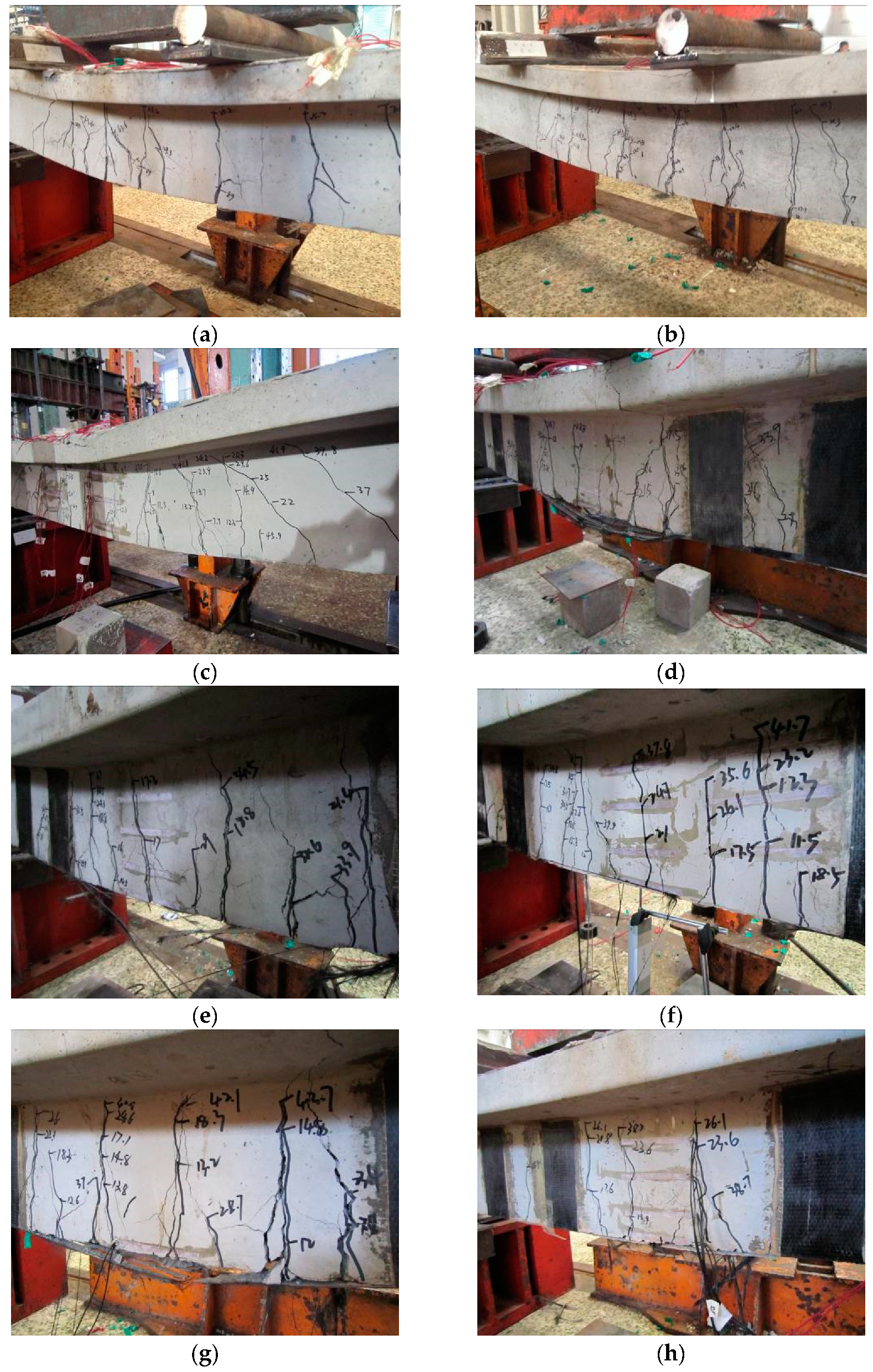 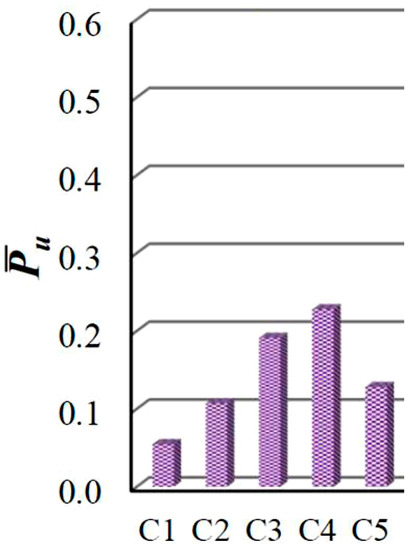 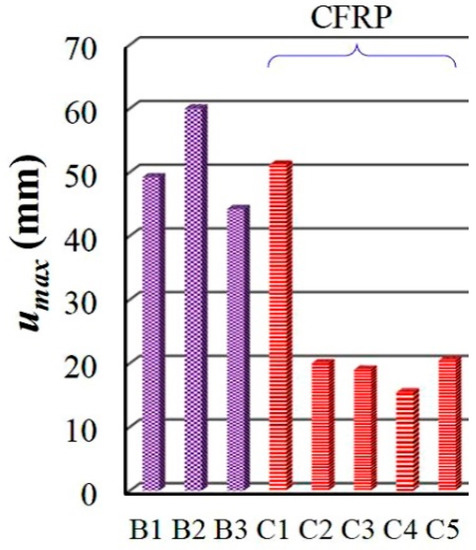 Table 3. CFRP and cohesive materials.
Table 3. CFRP and cohesive materials.
© 2020 by the authors. Licensee MDPI, Basel, Switzerland. This article is an open access article distributed under the terms and conditions of the Creative Commons Attribution (CC BY) license (http://creativecommons.org/licenses/by/4.0/).
We use cookies on our website to ensure you get the best experience. Read more about our cookies here.
Accept
We have just recently launched a new version of our website. Help us to further improve by taking part in this short 5 minute survey here. here.
Never show this again