Advancements in the functionalities and operating frequencies of integrated circuits (IC) have led to the necessity of measuring their electromagnetic Interference (EMI). Three-dimensional integrated circuit (3D-IC) represents the current advancements for multi-functionalities, high speed, high performance, and low-power IC technology. While the thermal challenges of 3D-IC have been studied extensively, the influence of EMI among the stacked dies has not been investigated. With the decreasing spacing between the stacked dies, this EMI can become more severe. This work demonstrates the potential of EMI within a 3D-IC numerically, and determines the minimum distance between stack dies to reduce the impact of EMI from one another before they are fabricated. The limitations of using near field measurement for the EMI study in stacked dies 3D-IC are also illustrated.
Keywords: 3D-IC (three-dimensional integrated circuit); electromagnetic interference; near field measurement 3D-IC (three-dimensional integrated circuit); electromagnetic interference; near field measurement

This work employs the gallium nitride high electron mobility transistor (GaN-HEMT) power amplifier IC as an example, which operates on frequency range of 2–4 GHz (S-band of electromagnetic spectrum). This IC possess the current advancements in frequency and power, which makes it a potential candidate to study the effect of EMI in this work. To illustrate the methodology developed here, we use a hypothetical 3D-IC where we stack up two and three of this same IC to form the 3D-IC in this work, and the severity of EMI in the stacked dies is also computed.
An optical image of the power amplifier IC under study at 1600× magnification is shown in Figure 2. Its input power (Pin) is 28 dBm and the corresponding output power (Pout) is 30.3 dBm. Drain to source voltage (VDS) of the transistors is 26 V with the gate to source voltage (VGS) of −2.8 V. The dimensions of the IC are 1700 µm × 1400 µm × 107.92 µm.

Recently, Tan et al. [34] developed a method to “fabricate” an IC from its GDSII file in a computer under ANSYS environment. Once the IC is fabricated, the ANSYS high frequency structure simulator (HFSS) is employed to compute the EM field distribution over the surface of the chip. ANSYS HFSS has a limitation that it cannot simulate transistors. To overcome the limitation of ANSYS HFSS, transistors are removed from the layout and respective voltages and currents as obtained from circuit simulator are inputted at respective circuit nodes for the proper functionality of the IC. With such replacements, our circuit can be completed, and the currents thus computed will be accurate. In this work, the values of these voltages and currents are obtained from the advanced design systems (ADSs) file of the circuit during the circuit simulation in the post layout phase. Figure 3 shows the flow chart of the method as also reported in the work of [28] for clarity, and Figure 4 shows the “fabricated” IC in the ANSYS environment. With this method, the magnetic field distribution of the IC can be obtained at different frequencies (2, 3, and 4 GHz). The method is verified with experimental results, as shown in the work of [34].
In Figure 4a, black circles represent input ports, while Pin is another input port used in simulation in HFSS.
The following equations are used in determining the electromagnetic distribution as given below [35]: where
Equations (1)–(3) are employed in the finite element method (FEM). FEM solves for the three-dimensional electromagnetic field, taking x, y, and z directions in consideration, and solves for the volume distribution using the curl function. As we are dealing with 3D IC, FEM in ANSYS HFSS will be most appropriate for the determination of EM distribution.
To perform electromagnetic field calculation, FEM is necessary. This necessity can be seen by comparing the magnetic field simulation using HFSS (which utilizes FEM) and SIwave (which uses method of moments (MOM)). Figure 5a shows the test structure used for magnetic field simulation and Figure 5b shows the results. One can see a significant difference in the amplitude and distribution of the magnetic field between the two methods. As solved Maxwell equations in FEM (3D method) will be more accurate, MOM (2.5D method) should be used with caution.
The impact of the H-field is more significant than electric field emissions in vicinity of the device, as wave impedance for the H-field is small and increases with the distance from the source [36]. After some distance from the source, wave impedances of the H-field and electric field become same, which is found to be 318 mm for the present case, as calculated using the Equation in the work of [36]. However, near field measurements in the present scenario are conducted at 0.2 mm, and thus magnetic field analysis becomes important. For the effect of EMI on 3D-IC circuits, the distance is even smaller, and hence magnetic field computation is the focus of this work.
Dielectric layers used in ANSYS HFSS simulation methodology are silicon carbide (SiC), GaN, and silicon nitride (SiN) to resemble the actual IC. Perfect electric conductor (PEC) boundary condition is used for ground plane and lumped port excitation is provided [34]. The overall electromagnetic simulation takes around 20 min.
Figure 6 shows the simulation result for 3 GHz operating frequency, respectively. Such a simulation method has been verified experimentally in our other works [34].

Integrated circuits for high-speed applications are prone to electromagnetic interference (EMI) issues. For detecting these EMIs, near field electromagnetic measurement is an important tool, as it is helpful in determining the locations of high electromagnetic emission (EME hot spots) within the IC. As the 3D stack dies technology is increasingly important owing to its several advantages, the EMI issue within the stacked dies must be considered when the stack dies are high frequency and high power.
However, near field electromagnetic measurement is ineffective to identify the hot spots of electromagnetic emission within the stacked dies, as illustrated in this work, and a computational method is developed to evaluate and identify the EME hot spots in integrated circuits with experimental verification. Using this method, we found that the EMI issue within the stack dies is a lot more severe. This work shows that the minimum value of the maximum magnetic field strength for 3D-stacked IC, as the distance between the stack increases, is about six times higher than an un-stacked IC. If the stack distance is smaller, the magnetic field strength can be as high as 16 times as compared with an unstacked IC. Thus, a minimum distance between the stack must be maintained. The actual minimum distance depends on the electromagnetic susceptible of the designed circuit. The method developed in this work can be done at the IC design stage before fabrication, enabling optimization of the stack distance as well as circuit design for reducing the EMI, and eliminating the significant cost of fabrication owing to improper design.

This work was funded by the Chang Gung University research Grant QZRPD123 and CIRPD2F0024. 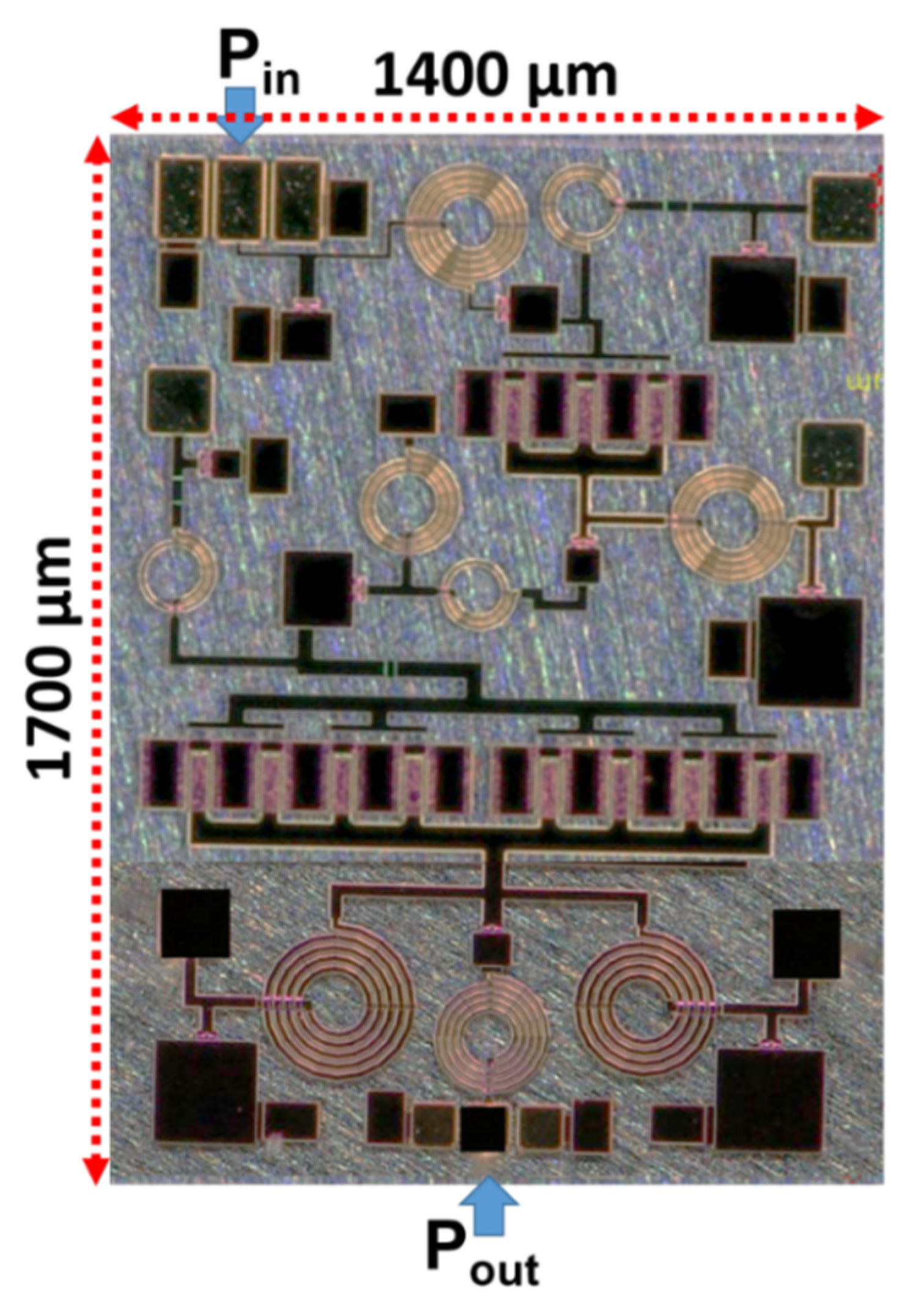 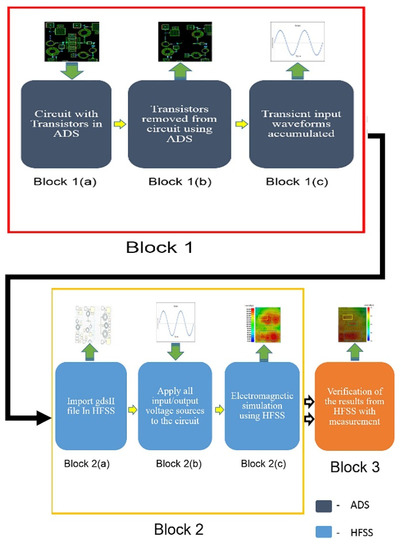 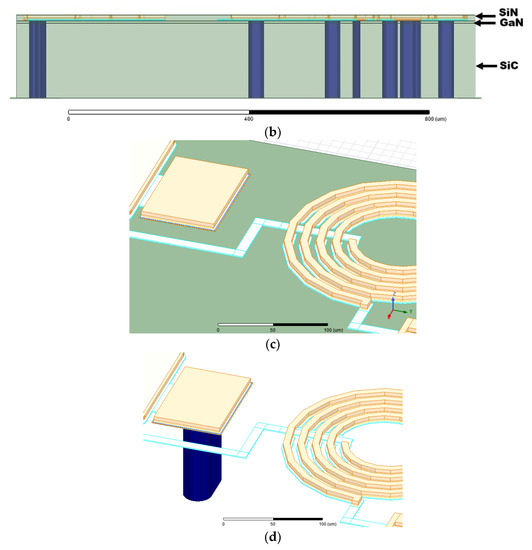 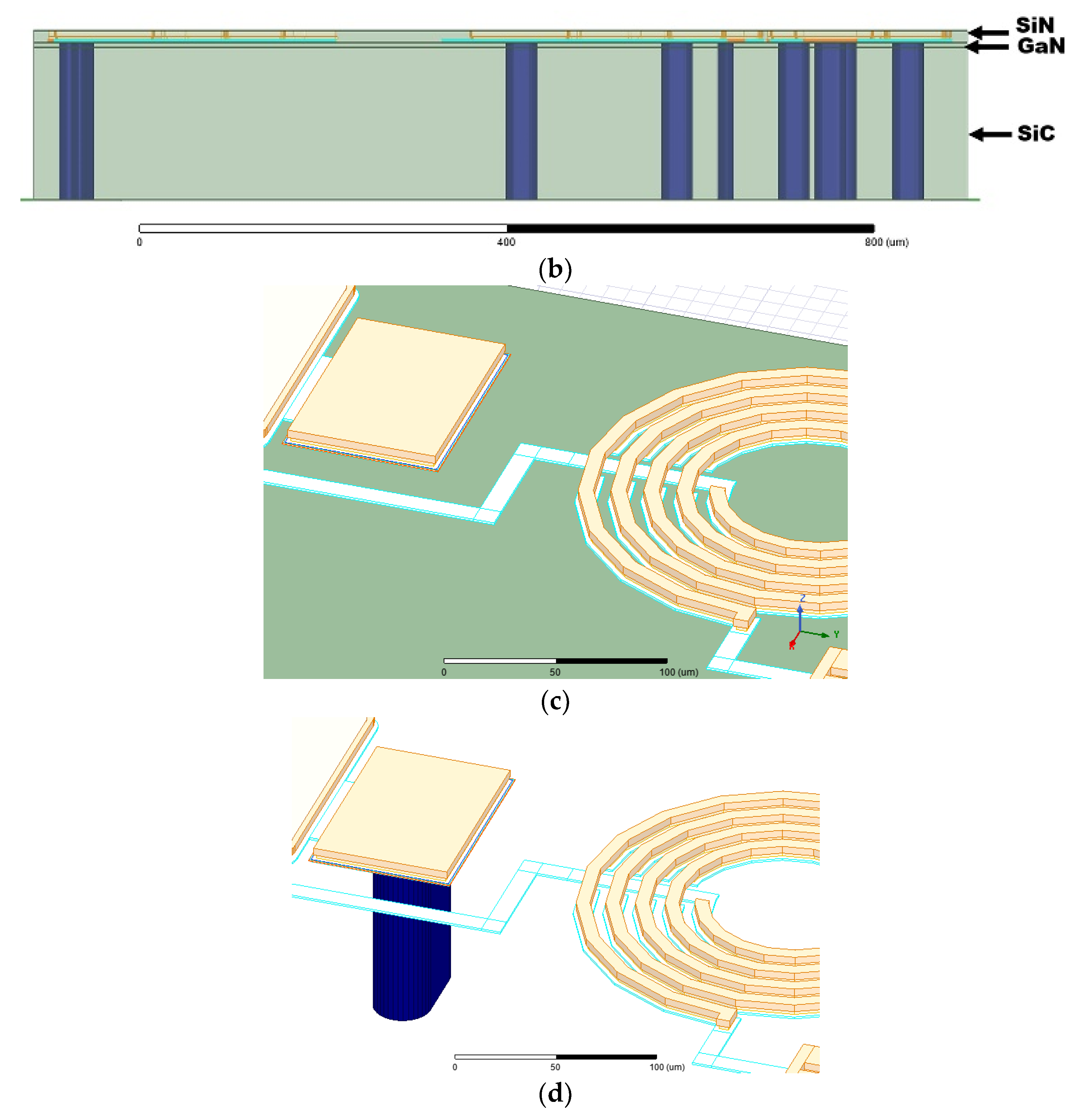 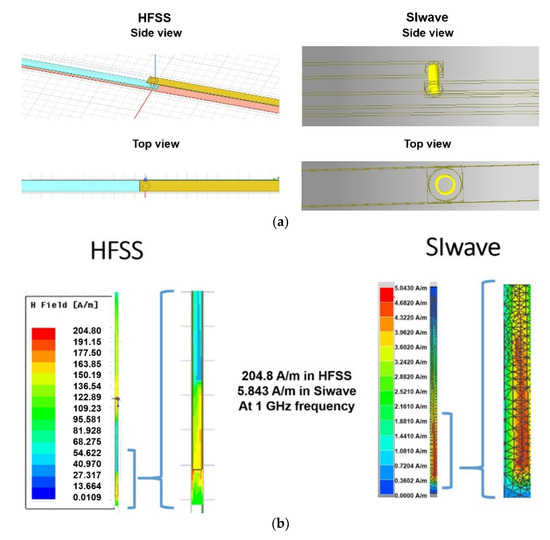 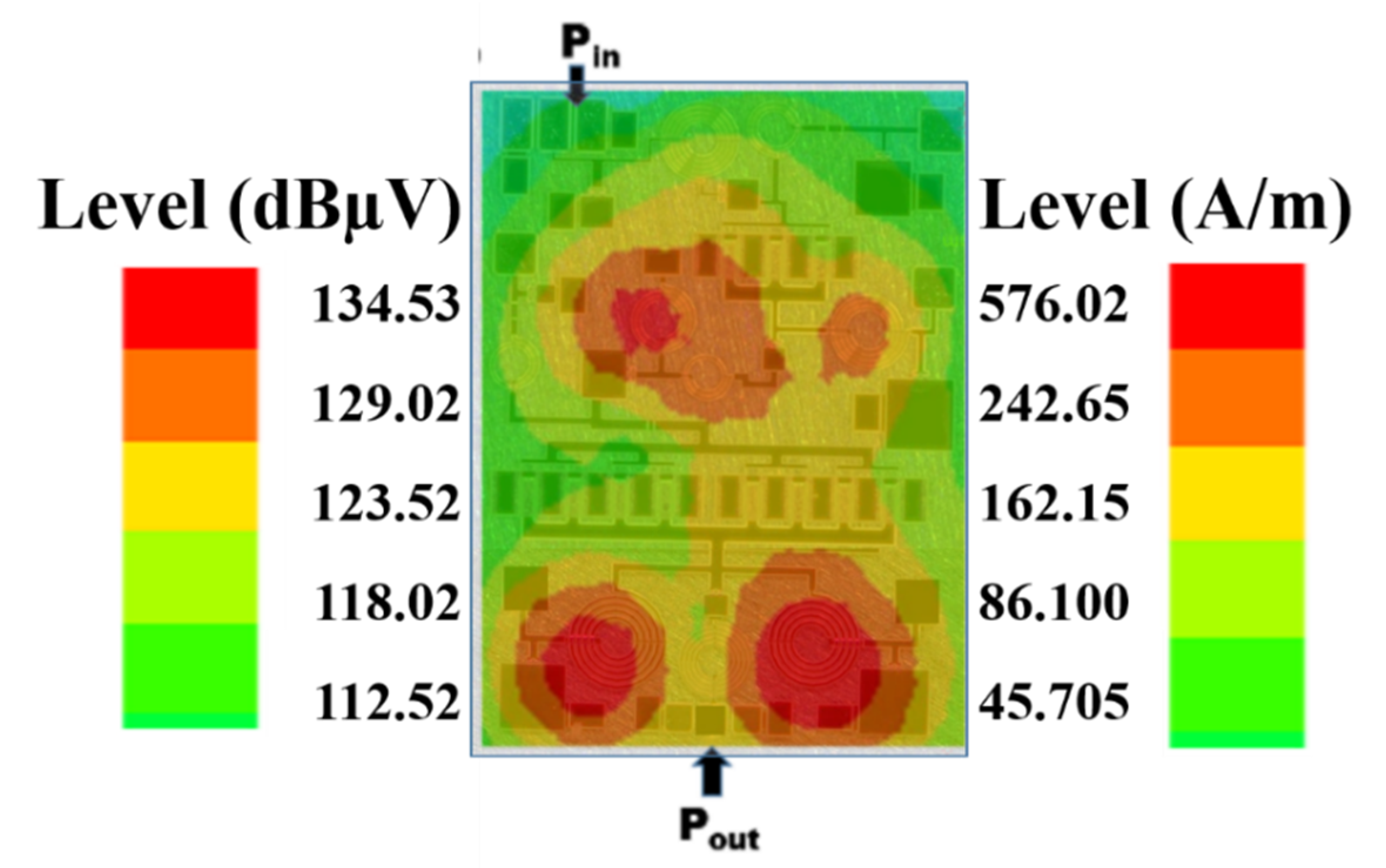 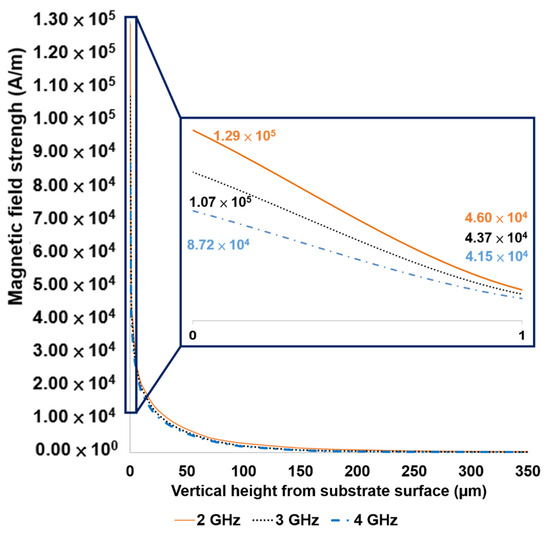 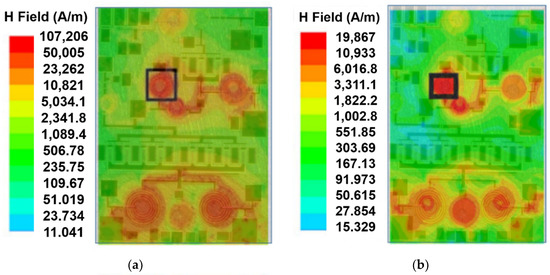 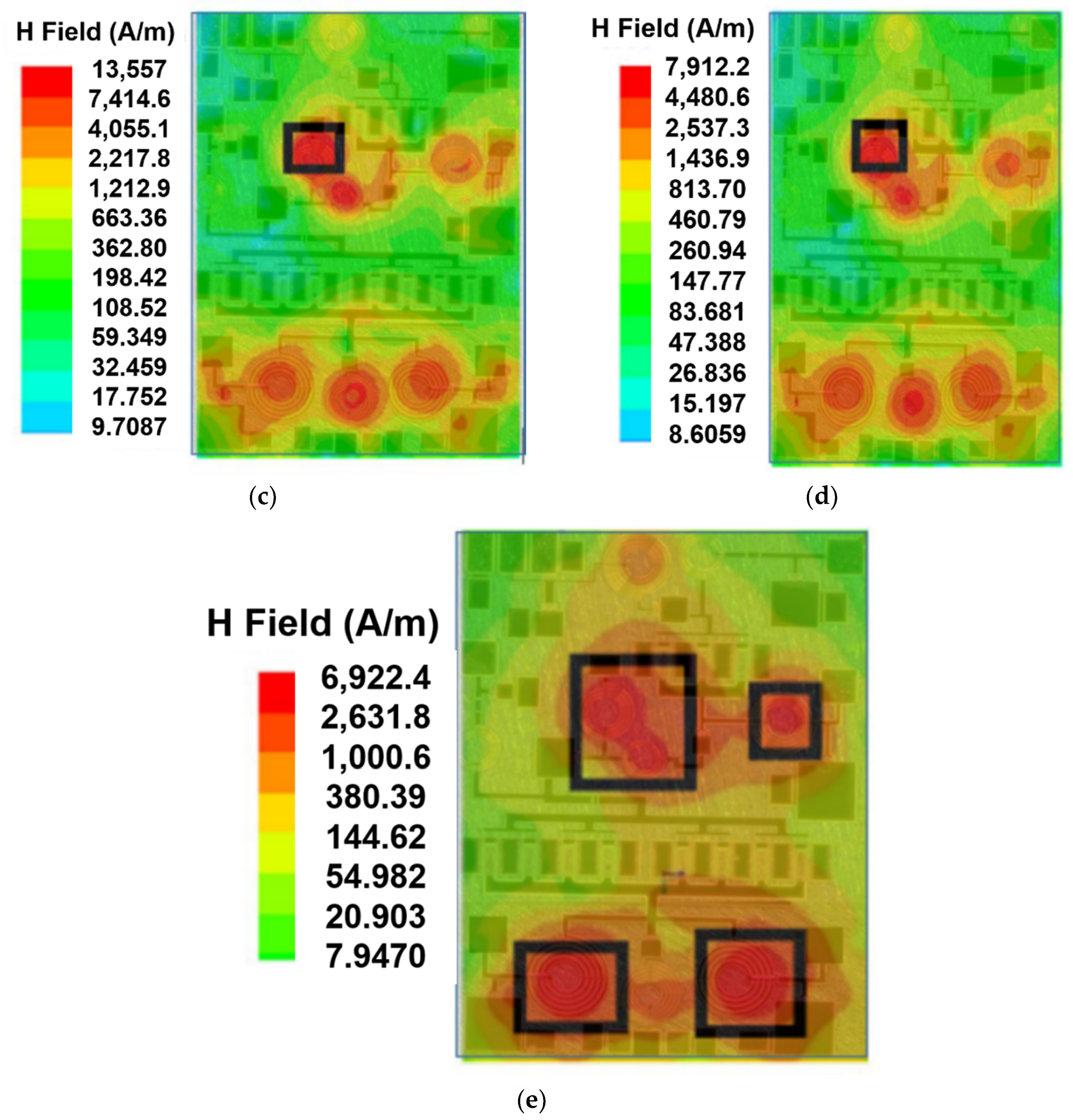 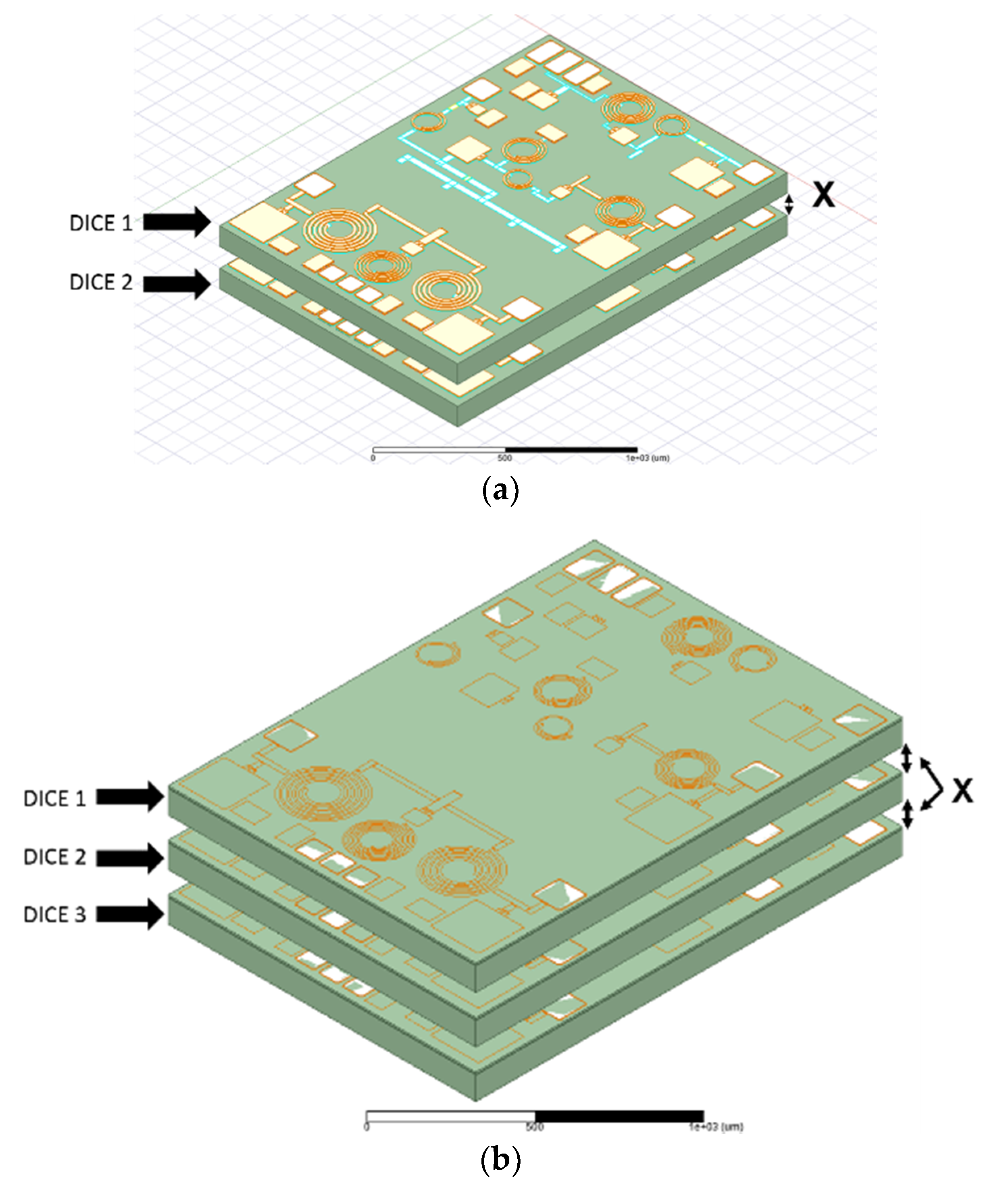 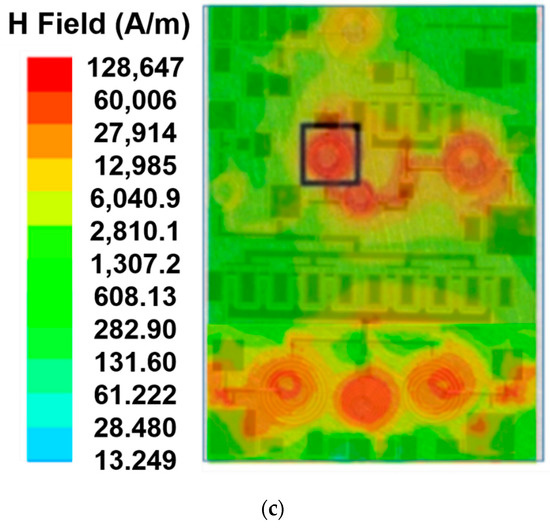 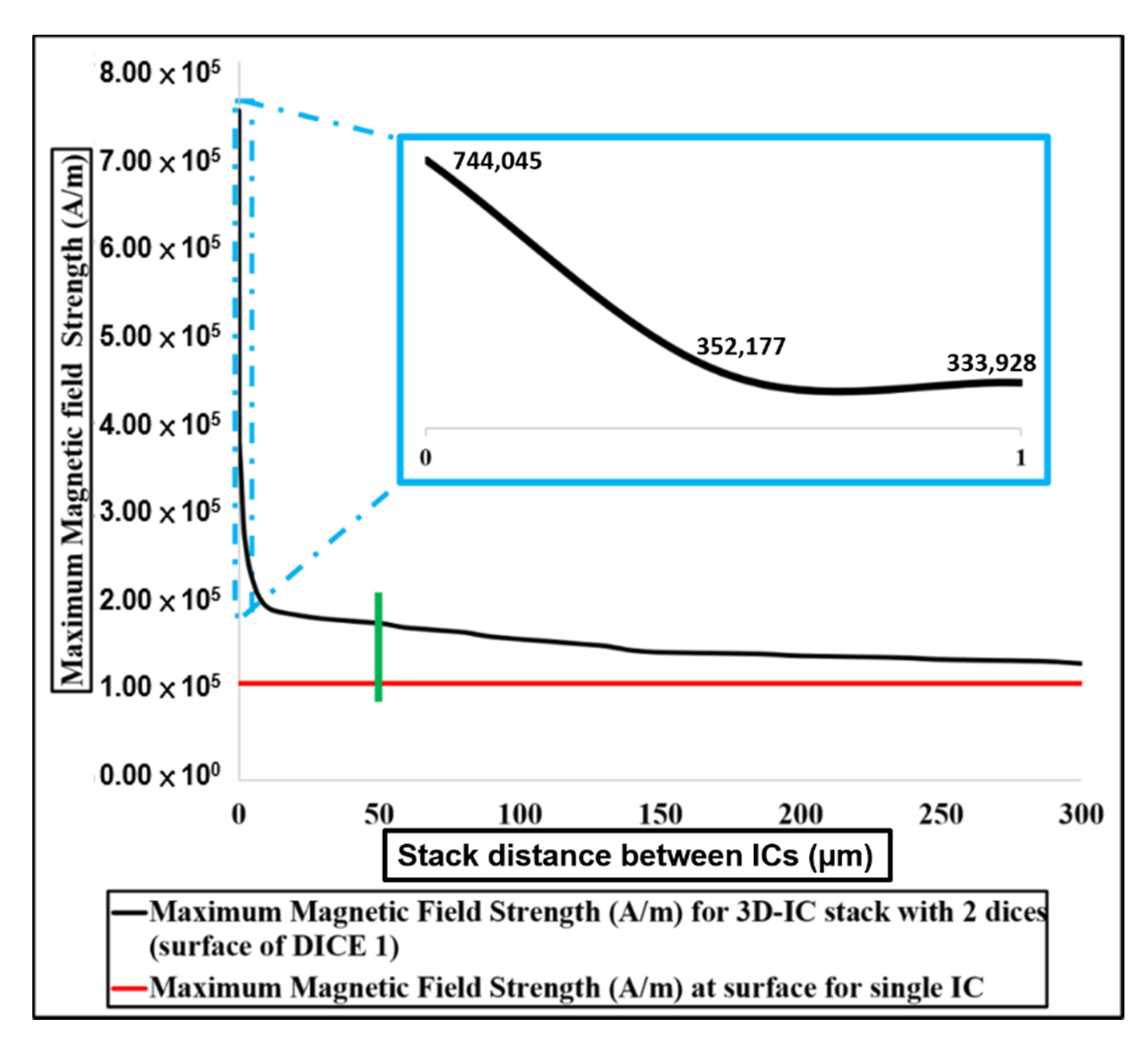 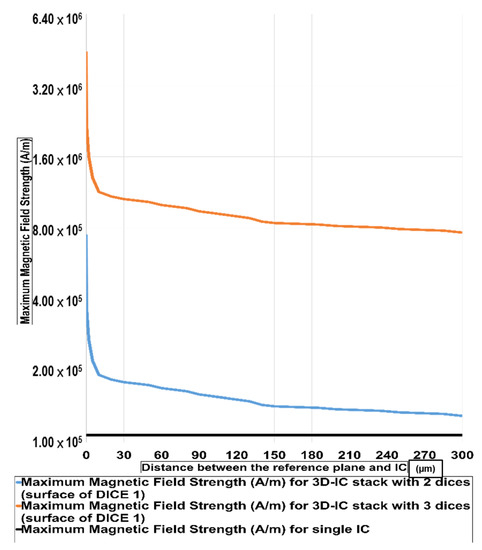 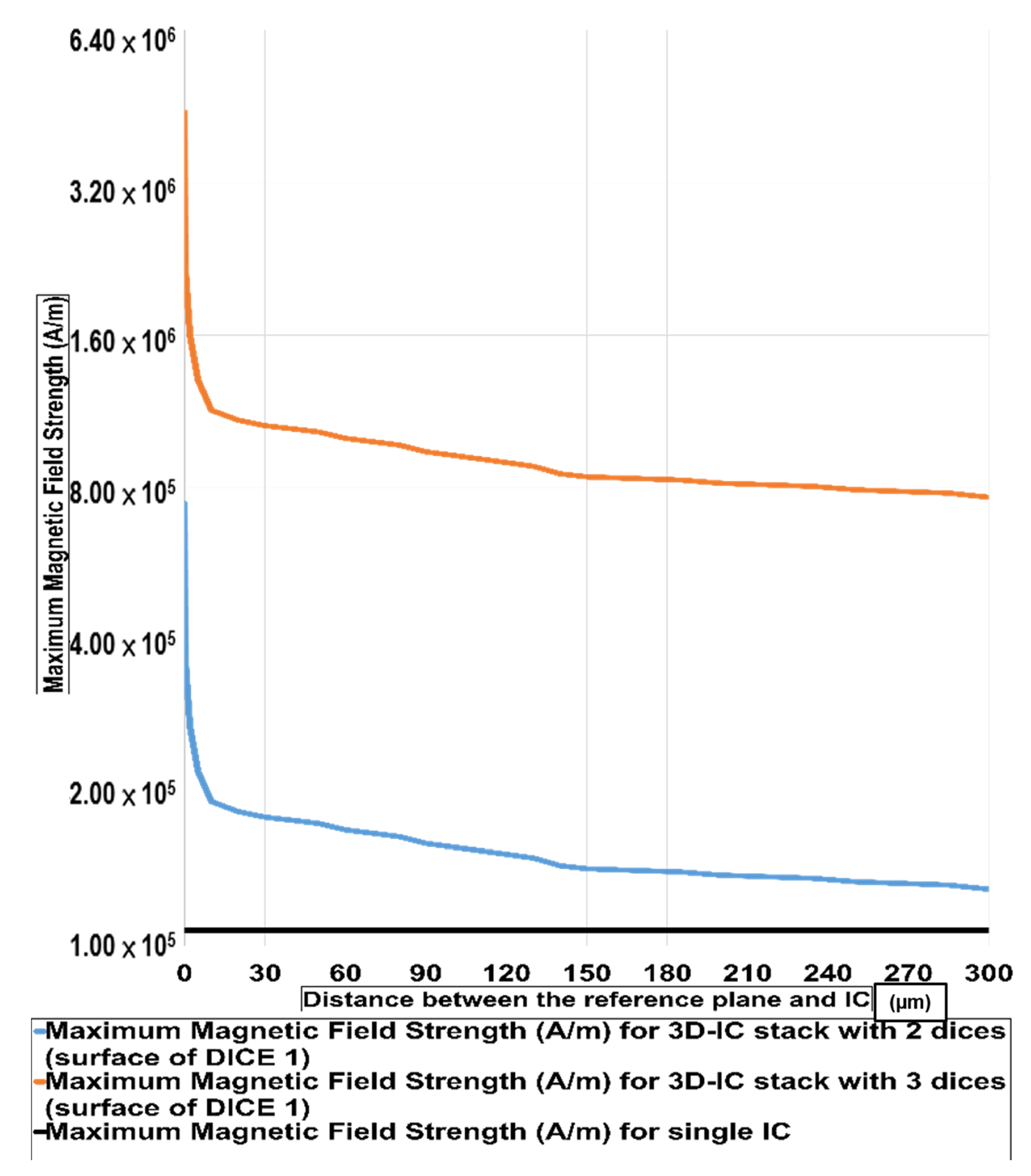 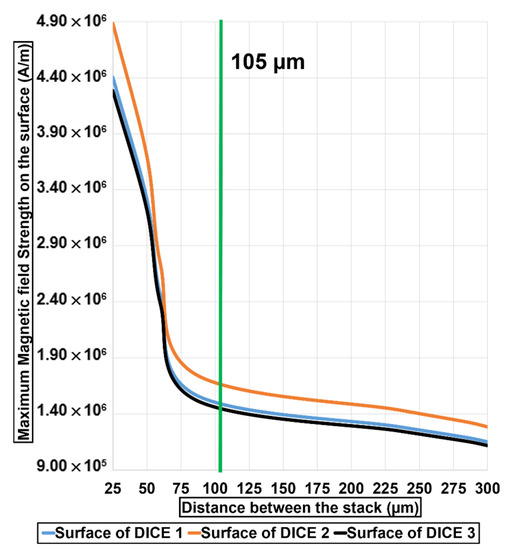