In this study a prototype sub-picosecond laser was investigated for cutting and scribing of silicon wafers. The Yb:KYW laser used for this investigation, unlike ultrashort systems used previously, generates pulses of 650 fs, i.e., between the pico and femtosecond range. The laser was placed in a micromachining setup, involving a galvo scanner and a telecentric lens. A study of the influence of the processing parameters on the crater width, depth, and quality of machining was carried out. The optimal parameters were found to be 343 nm, 200 kHz, 7 mm/s, and 15 pattern repetitions. The experiments were performed using samples of a silicon wafer of 210-µm thickness. The experimental results show that the sub-picosecond laser can be a promising and competitive tool for solar cell micromachining. In comparison to the commercially available ultrashort pulse laser systems, we find the sub-picosecond laser to be a more cost efficient and reliable source, than a femtosecond one. In addition, the prototype Yb:KYW design offers some unique parameters, such as repetition rate in the range of 100–400 kHz, UV wavelength or obtainable laser fluence close to the silicon ablation thresholds. View Full-Text
Keywords: sub-picosecond pulses; silicon wafers; photovoltaic cells; laser micromachining sub-picosecond pulses; silicon wafers; photovoltaic cells; laser micromachining
►▼ Show Figures 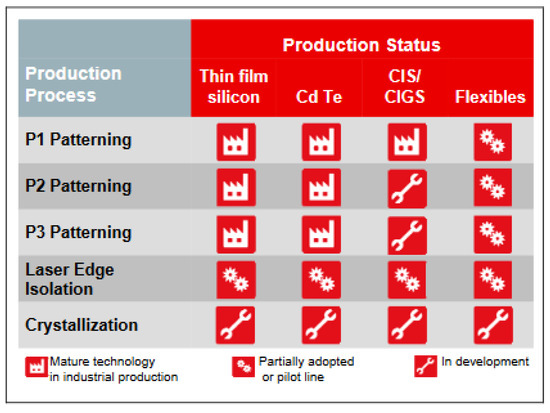