Printing technology enables not only high-volume, multipurpose, low-impact, low-cost manufacturing, but also the introduction of flexible electronic devices, such as displays, actuators, and sensors, to a wide range of consumer markets. Consequently, in the past few decades, printed electronic products have attracted considerable interest. Although flexible printed electronic products are attracting increasing attention from the scientific and industrial communities, a systematic study on their sensing performance based on printability has not been reported so far. In this study, carbon black/Ag nanocomposites were utilized as pastes for a flexible wearable strain sensor. The effects of the rheological property of the pastes and the pattern dimensions of the printed electrodes on the sensor’s performance were investigated. Consequently, the printed sensor demonstrated a high gauge factor of 444.5 for an applied strain of 0.6% to 1.4% with a durability of 1000 cycles and a linearity of R2 = 0.9974. The sensor was also stable under tough environmental conditions.
Keywords: strain sensor; rheology; dimension; Ag nanoparticles; carbon black; screen printing strain sensor; rheology; dimension; Ag nanoparticles; carbon black; screen printing

Strain sensors for the detection of applied stress have attracted considerable attention for wearable electronics in the fields of sports, personal health monitoring, soft robots, and prosthetic devices [1,2,3,4,5]. The key factors in determining the performance of a strain sensor are high sensitivity, stability, and low manufacturing cost with simple processability [6]. Although conventional strain sensors with metal foils have been commercialized, they still have the limitations of low sensitivity, high material costs, and complexity of the manufacturing process [7]. In recent years, considerable efforts have been made to develop strain sensors with a high performance and low cost using functional materials. Carbon-based materials, such as graphene and carbon nanotubes, are widely used in strain sensors because of their excellent electrical conductivity and mechanical reliability. S. Ali et al. reported a highly sensitive humidity sensor consisting of silver interdigital electrodes and a graphene/methyl-red composite layer, which is fabricated on a low-cost transparent polyethylene terephthalate (PET) substrate using a commercialized Dimatix Materials printer [8]. J. Lee et al. also investigated a humidity sensor film fabricated by loading large amounts of multi-walled carbon nanotubes (MWCNTs) in a poly(acrylic acid) polymer matrix containing poly(4-styrenesulfonic acid) to enhance MWCNT dispersion [9]. However, the relatively high manufacturing costs of graphene and carbon nanotubes have limited the mass production of such sensors. Alternatively, carbon black (CB) has been employed for manufacturing strain sensors, owing to its high conductivity and low price [10]. However, there are only limited reports on the use of CB for manufacturing strain sensors.
The most widely used method to prepare wearable strain sensors with a low cost is to utilize resistive sensors with simple structures. Resistive sensors can be fabricated via printing technology, which enables the mass production of wearable devices with a high flexibility. Among existing printing methods, the screen-printing process has been widely used in the field of electronics and has been successfully employed for various functional pastes and substrates [6,11,12,13,14,15,16]. Previous studies have proposed various screen-printing methods. The research trend in these studies has evolved toward the development of low-cost, diversified, simple, or low-waste manufacturing processes [6,17,18,19,20,21]. Recently, H. Song et al. have reported a screen-printed strain sensor with CBs [22]. W. Jang et al. have demonstrated a flexible strain sensor with a composite of CB and silver nanoparticles (AgNPs) as the sensing material and thermoplastic polyurethane as the matrix [23]. However, the sensitivities of the reported sensors were low and the effect of printability on their sensitivity was not investigated. In fact, the characteristics of screen-printed strain sensors are highly related to printability, which is affected by the rheological properties of the paste inks and the dimensions of the printed patterns. Several reports on using spherical and/or flake-shaped silver particles/nanowires and carbon-based materials, such as graphite, single-walled carbon nanotubes, and graphene, for resistive-type printed sensors have been published so far [6,17,21,24,25]. However, the relationship between the performance of a sensitive strain sensor and printability in the screen-printing process has not been investigated so far.
In this article, we propose a simple and low-cost method to manufacture a flexible and high-performance sensitive strain sensor using CB/AgNP composites through a screen-printing process. During the fabrication process, the effects of the rheological property of the paste and the dimensions of the printed pattern are systematically studied to maximize the sensing properties. Consequently, the gauge factor (GF) of the sensor shows a high value of 444.6 with a linearity of R2 = 0.99. The detection ability of the strain sensor with the CB/AgNPs composite material for human movements, such as finger bending and elbow flexion, is studied as well.

An easy, low-cost, and low-temperature chemical solution process was used to prepare the CB/Ag paste. The resin, dispersion, and solvent were mixed in the weight ratio of 4:1:8 with the CB solid contents of 3.5, 17.5, and 31.5 wt%. The materials were mixed using a vortex agitator (Daihan Scientific) at 1000 RPM for 3 h. The paste was added to the mixture for 20 min, the mixture was soaked for 5 min, and this process was repeated three times.

The formulated pastes with different ratios of materials were first loaded onto screen meshes (mesh count 400, Samborn Screen, South Korea) and squeezed with a snap-off distance of 0.3 mm at a speed of 10 cm/s and a pressure of 6.8 mm, as shown in Figure 1a. Then, the printed patterns were dried in a vacuum oven at 120 °C for 1 h. The printed sensors were connected to a nickel tape and silver paint to evaluate their performance.

We proposed a new type of strain sensor based on CB/AgNP composites using a screen-printing process. The rheological property of the pastes was investigated to determine the pattern fidelity in accordance with the ratio of CB and AgNPs. The electrical performances of the printed sensors with different widths and lengths were investigated, to evaluate the sensitivity of the strain sensors. Consequently, a GF of 444.6 was obtained for the printed sample with the line width of 100 µm and the length of 52 mm at the applied strain ranging from 0.6% to 1.4%. This is the highest sensitivity at this applied strain range among the printed sensors reported so far, to the best of our knowledge. The sample also showed a high sensing linearity of R2 = 0.9974 and a high bending stability of 1000 cycles. In particular, the sensor revealed a stable resistance change under tough environmental conditions, demonstrating its feasibility for wearable applications.

Methodology, X.Q.; investigation, X.Q. and H.H.; writing—original draft preparation, X.Q. and S.L.; writing—review and editing, S.L.; supervision, B.H. All authors have read and agreed to the published version of the manuscript. 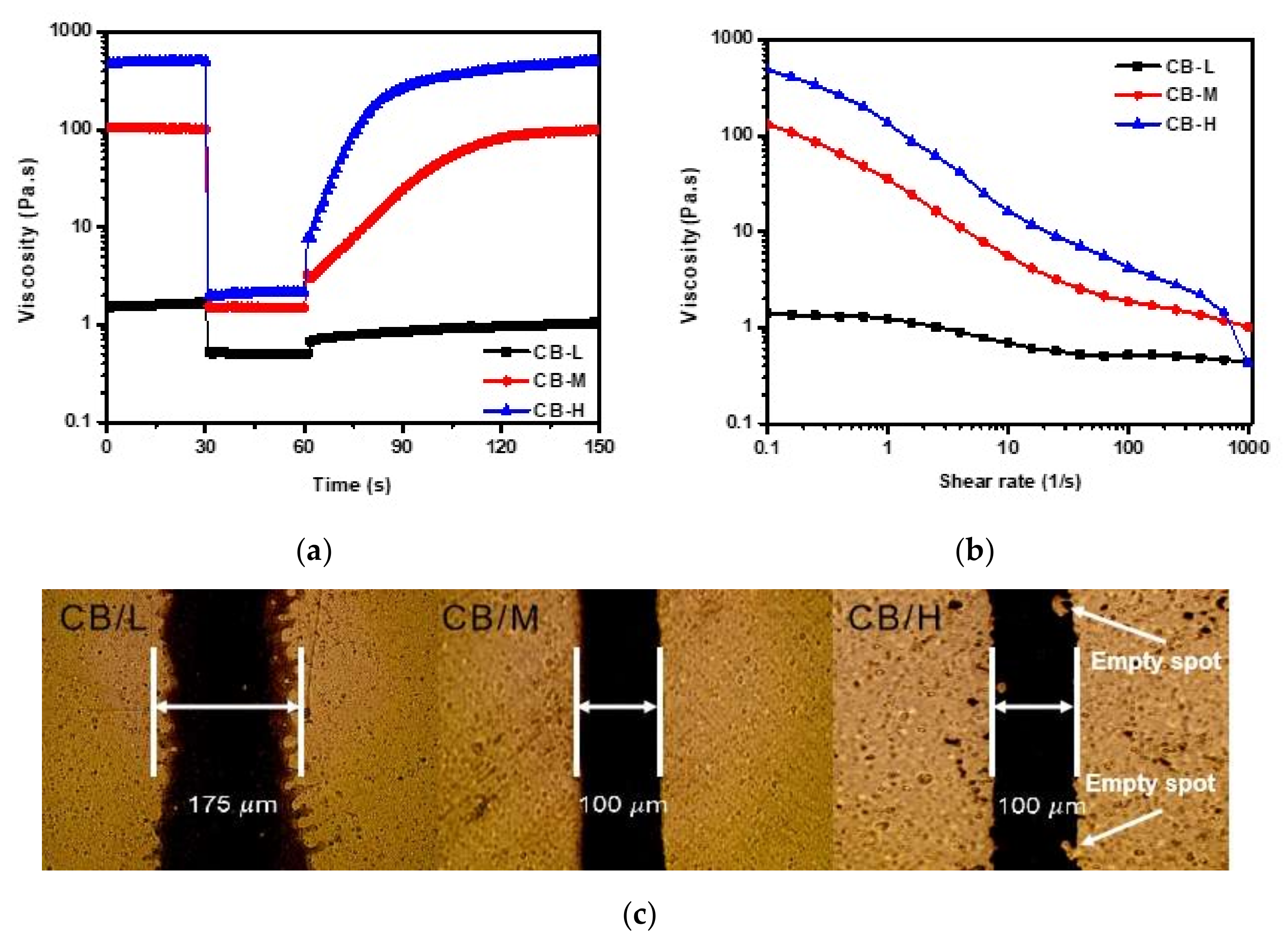