The number and volume of retinal macular edemas are important indicators for screening and diagnosing retinopathy. Aiming at the problem that the segmentation method of macular edemas in a retinal optical coherence tomography (OCT) image is not ideal in segmentation of diverse edemas, this paper proposes a new method of automatic segmentation of macular edema regions in retinal OCT images using the improved U-Net++. The proposed method makes full use of the U-Net++ re-designed skip pathways and dense convolution block; reduces the semantic gap of the feature maps in the encoder/decoder sub-network; and adds the improved Resnet network as the backbone, which make the extraction of features in the edema regions more accurate and improves the segmentation effect. The proposed method was trained and validated on the public dataset of Duke University, and the experiments demonstrated the proposed method can not only improve the overall segmentation effect, but also can significantly improve the segmented precision for diverse edema in multi-regions, as well as reducing the error of the number of edema regions.
Keywords: OCT; macular edema; U-Net++; Resnet OCT; macular edema; U-Net++; Resnet

This paper used the improved U-Net++ to perform two-level semantic segmentation of each pixel for the OCT image and segmented the edema region and background region.
The overall flow chart of the proposed method is shown in Figure 2; the proposed framework consists of three stages. In the first stage, the data are augmented by operations such as flipping, cropping, and translation. Thus, the generalization ability of the model is improved by increasing the amount of training data, and its robustness is also improved by increasing data noise. The second stage, a new U-Net++ network architecture, is used to train and segment images. The final stage uses the morphology for post-processing refinement.

The H-denseunet network was proposed by Li et al. [22]. Drozdzal systematically studied the importance of short skip connections [23]. The network’s redesigned skip connection can retain image features better, effectively preventing the features loss of the diverse lesions in medical image segmentation. Inspired by this, U-Net++ was proposed by Zhou et al., and has greatly improved the skip connection part of the U-Net network [24]. The network structure is shown in Figure 3, as follows:
In the figure, the red part represents the original U-Net; the green and blue parts are respectively the skip connection and up-sampling parts of u-net + +, which are different from u-net; and the black part indicates the depth supervision. As can be seen from the figure, U-Net++ starts from the encoder sub-net or backbone network by the decoder sub-net. The redesigned skip connection of the pathways transforms the connectivity of the encoder and decoder sub-networks. In U-Net, the feature map of the encoder is directly received in the decoder, while they go through a dense convolutional block in U-Net++, and the number of convolutional layers depend on the pyramid level. Both the first and the second layer’s structure diagrams of the network are shown in Figure 4:
From Equation (1), the skip pathways are as follows. Let x(i,j) represent the output of this layer, i refer to the down-sampling layer along the encoding direction, and j refer to the dense convolution layer along the skip path direction. This pile of feature maps is represented by x(i,j), and the calculation is shown in Equation (1): where the function H(·) is a convolution operation, an activation function U(·) represents an up-sampling layer, and the bracket [ ] represents a cascade layer.
Essentially, the dense convolutional blocks make the semantic level of the encoder feature map closer to the feature map required in the decoder. Assuming that the received encoder feature map is semantically similar to the corresponding decoder feature map, the optimizer will become an easier optimization problem.
In terms of loss function, the combination of binary cross-entropy and Dice coefficient is referred to as the loss function, as shown in Equation (2). where and respectively represent the flattening prediction probability and flattening basic fact of the b image, and N refers to the batch size.
Due to the nested skip path, U-Net ++ forms a full-resolution graph at multiple semantic levels [25], which can be deeply supervised, enabling the model to run in two modes: (1) precise mode, where the output is averaged from all split branches, and (2) fast model, where the final segmentation graph only selects one of the split branches; this selection determines the degree of model pruning and speed gain, and is simplified during prediction.

Through flipping, cropping, panning, and rotating operations, the data will be expanded from 110 images to 1100 images, which could improve the generalization and robustness ability of the model.

U-Net++ has the outstanding improvement in feature transmission and combination of deep and shallow layers, but there is no improvement in feature extraction. There are some diverse edema regions whose features may lose. In order to extract edema features better and improve segmentation effects, this paper conducted a two-stage optimization improvement on the U-net++ and the backbone network part. First of all, due to the residual block design of the Residual Network (ResNet), the network will not degrade with the deepening of the layer, and thus it is more suitable as a backbone network than other networks. Then, the selected ResNet backbone network was further improved in the two aspects of information flow through the network and shortcut, so that the segmentation accuracy of the model in the diverse edema region was improved.
There are many networks that can be selected as the backbone, such as VGGNet, ResNet, DetNet, and DenseNet. Among them, ResNet is a powerful convolutional neural network (CNN) architecture [26]. Its main structure is several ResBlocks (residual block). The specific design of the ResBlock can solve the problem of network degradation caused by the deepening of the network, making thousands of layers of networks possible, and has been widely used in various tasks. In this paper, after optimization and comparison, the ResNet was used as the backbone of U-Net++ to achieve the best results.
Table 1 lists the ResNet structure of 34 layers and 101 layers. It is shown that the network structure can be divided into two parts, five main Conv layers (including ResBlocks) and an end phase. In the five main phases, each Conv layer contain several blocks except Conv1. The ResNet34 network’s Conv2 layer has three ResBlocks, Conv3 has four ResBlocks, Conv4 has six ResBlocks, and Conv5 has three ResBlocks.
As shown in Figure 5, this proposed method uses ResNet’s Conv1, Conv2, Conv3, Conv4, and Conv5 as U-Net++’s backbone, instead of X(0,0), X(1,0), X(2,0), X(3,0), and X(4,0), and changes all 3 × 3 × n to 7 × 3 × 64 convolutional blocks that are used for feature extraction, ensuring the receptive field of the last encoder block includes the entire retinal region. The 1 × 1 × n convolution block becomes 1 × 1 × 64. The improved network will significantly improve the segmentation effect of macular edema, compared with the previous U-Net++. The second step of improvement is to learn from ResNeSt [27], which is the latest network proposed in April 2020, which makes ResNet trainable network reach more than 3000 layers and has improved accuracy. The ResNeSt network has made the following improvements [27].
(1) Improved information flow through the network.
As shown in Figure 6a, the main structure of ResNet is ResBlock block. Each ResBlock contains two 1 × 1 and one 3 × 3 convolutions, and then three ReLU layers are added. The large gray arrow represents the direct connection of information; there is also a ReLU activation layer on the main channel of the gray arrow. The ReLU at this position will clear the negative weight, especially at the beginning of training, because there will be a large amount of negative weight, and thus the ReLU will have a negative impact on information transmission. To solve this problem, the pre-activation [28] is proposed by an improved method, as shown in Figure 6b. By changing the positions of BN and ReLU, the ReLU is removed in the straight connected path, and placed in the ResBlock. However, this method increases the learning difficulty, the lack of non-linearity between blocks, and limits the learning ability.
ResNeSt solves the above problem by segmenting the network structure. Taking ResNet-50 as an example, as shown in Figure 6c: ① divide the network structure into three parts, four main stages (Conv2-5), one start (Conv1), and an ending phase (ending); ② each stage in the four main stages can contain several Blocks, and each stage is divided into three parts: one start ResBlock, several middle ResBlocks, and one end ResBlock. According to the different positions of the stage, each ResBlock has a different design.
(2) Improved projection shortcut.
In the original ResNet architecture, as shown in Figure 7a, if the superior input x and output dimensions do not match, a 1 × 1 convolution with a step size of 2 is used to adjust the dimensions, and thus both channel and spatial matching information can be achieved by the 1 × 1 convolution. However, the architecture will lose 75% of important information, and the remaining 25% of the information will not have meaningful screening criteria. It also introduces noise and causes information loss, which will negatively affect the main channel flow information.
As shown in Figure 7b, ResNeSt considers all information from feature mapping. ResNeSt first uses the 3 × 3 max pooling layer of stride = 2, then uses 1 × 1 convolution of stride = 1 for channel projection, connecting with BN and finally selecting the element with the highest activation degree in the next step in order to reduce information loss.

To solve the problems of connection at small breakpoints and some unsmooth edema regions after network segmentation, this paper uses morphological operation to remove image noise, eliminate small objects, and separate target region at fine points, so that it can achieve refined segmentation results [29].
The proposed algorithm flow is shown as Algorithm 1. where n represents the number of iterations, m represents the batch size, and w represents the network parameter.

The proposed method was evaluated on the dataset of DME (diabetic macular edema) patients published at Duke University [30]. The dataset consists of 110 SD-OCT B-scan images with a size of 512 × 740, obtained from 10 patients with DME (11 B-scans per patient). The 11 B-scans of each patient are concentrated at the fovea and five frames on each side of the fovea (fovea slice was scanned at ±2, ±5, ±10, ±15, and ± 20 on each side of the fovea slice). These 110 B-scan images were annotated for retinal layers and regions of edema by two experts. This paper used the annotations of expert 1 as the ground truth for training the network and evaluation on the proposed method.

This paper proposes a new deep learning method for automatic segmentation and detection of macular edemas in retinal OCT images. In the proposed method, firstly, the data augmentation is used to avoid the over fitting of the model. Then, the U-Net++ network was improved by using ResNet as the backbone network and by drawing on ResNeSt, which can reduce the loss of features in the transmission process of the network training so that it not only improves the overall accuracy but also improves the effect in diverse edemas in multi-regions. Finally, the morphological opening operation was used to process the prediction results. In future work, we will explore the integration of prior knowledge for the macular edema in retinal OCT images, investigate advanced semantic segmentation network architectures and the self-supervision model [31,32], and achieve much better 3D segmentation results. For the problems of small amount of data and the annotation differences caused by the subjectivity of experts, we will increase the collection of data, find a number of relevant professionals to label, and select relatively accurate annotations to train the network model more effectively.

This work was supported by research projects of basic scientific research business expenses of provincial colleges and universities in Heilongjiang Province (no. Hkdqg201911). 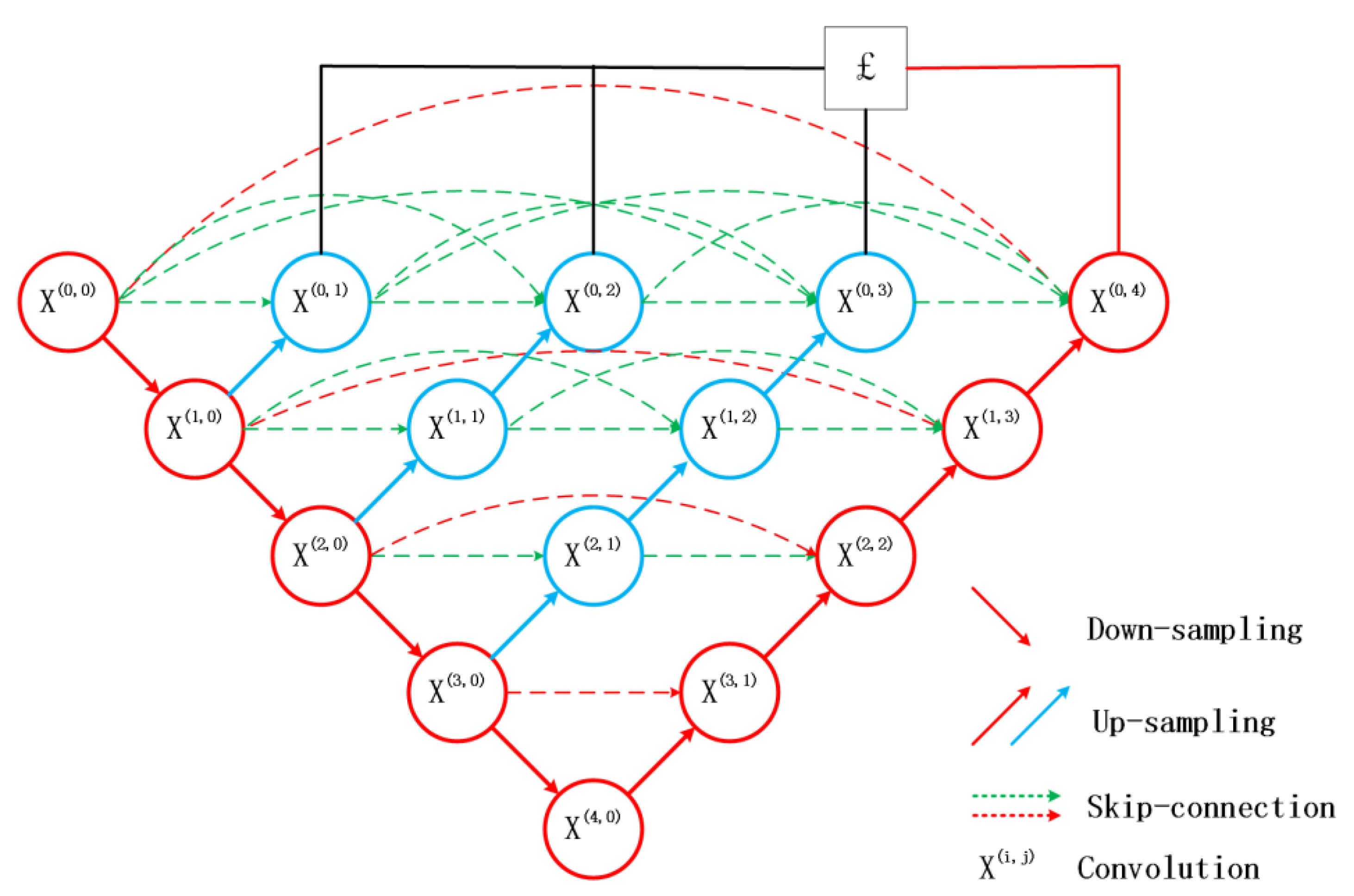 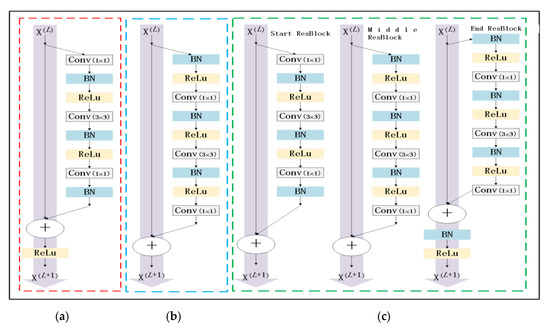 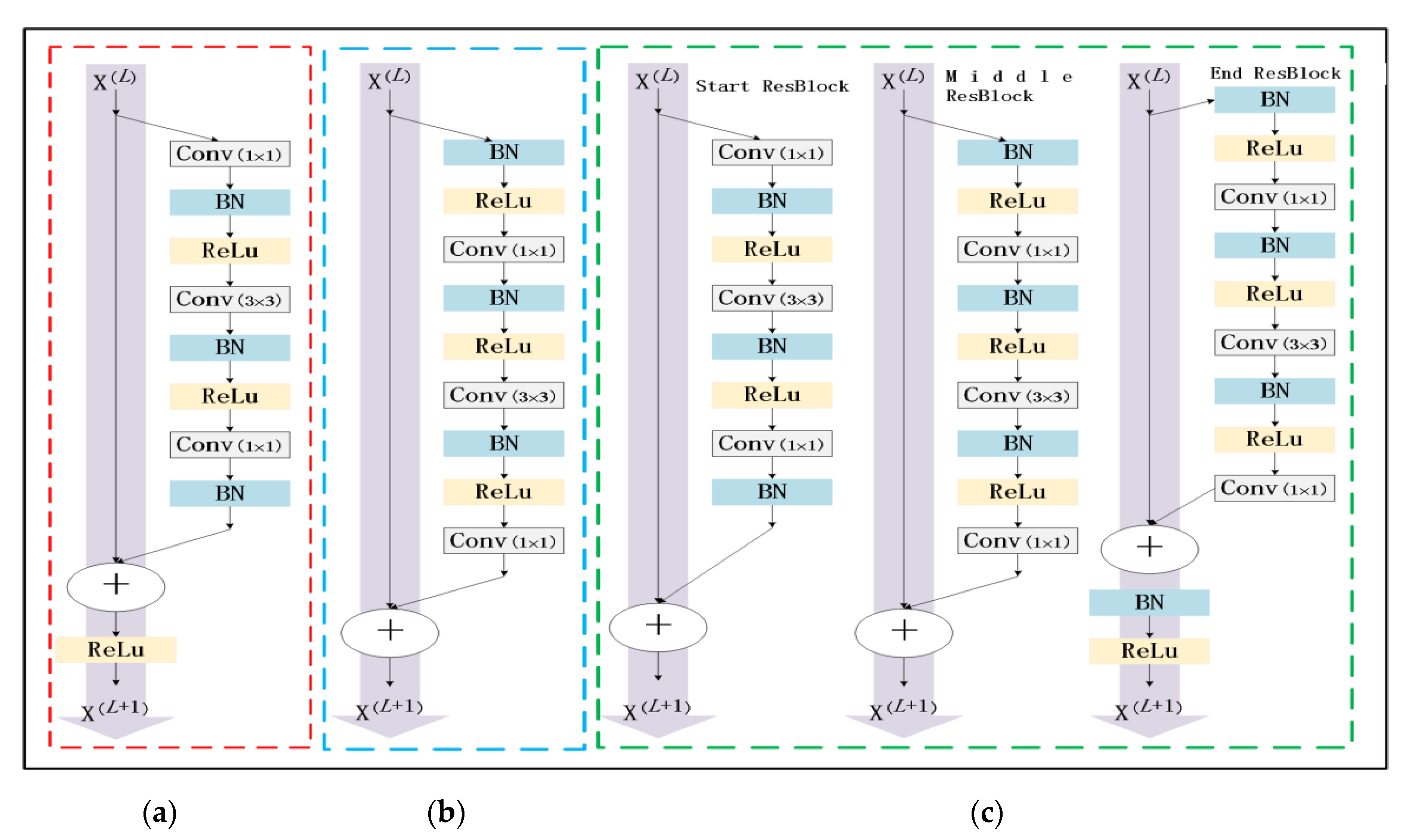 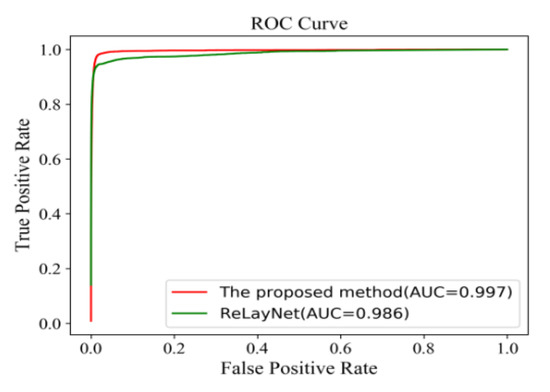 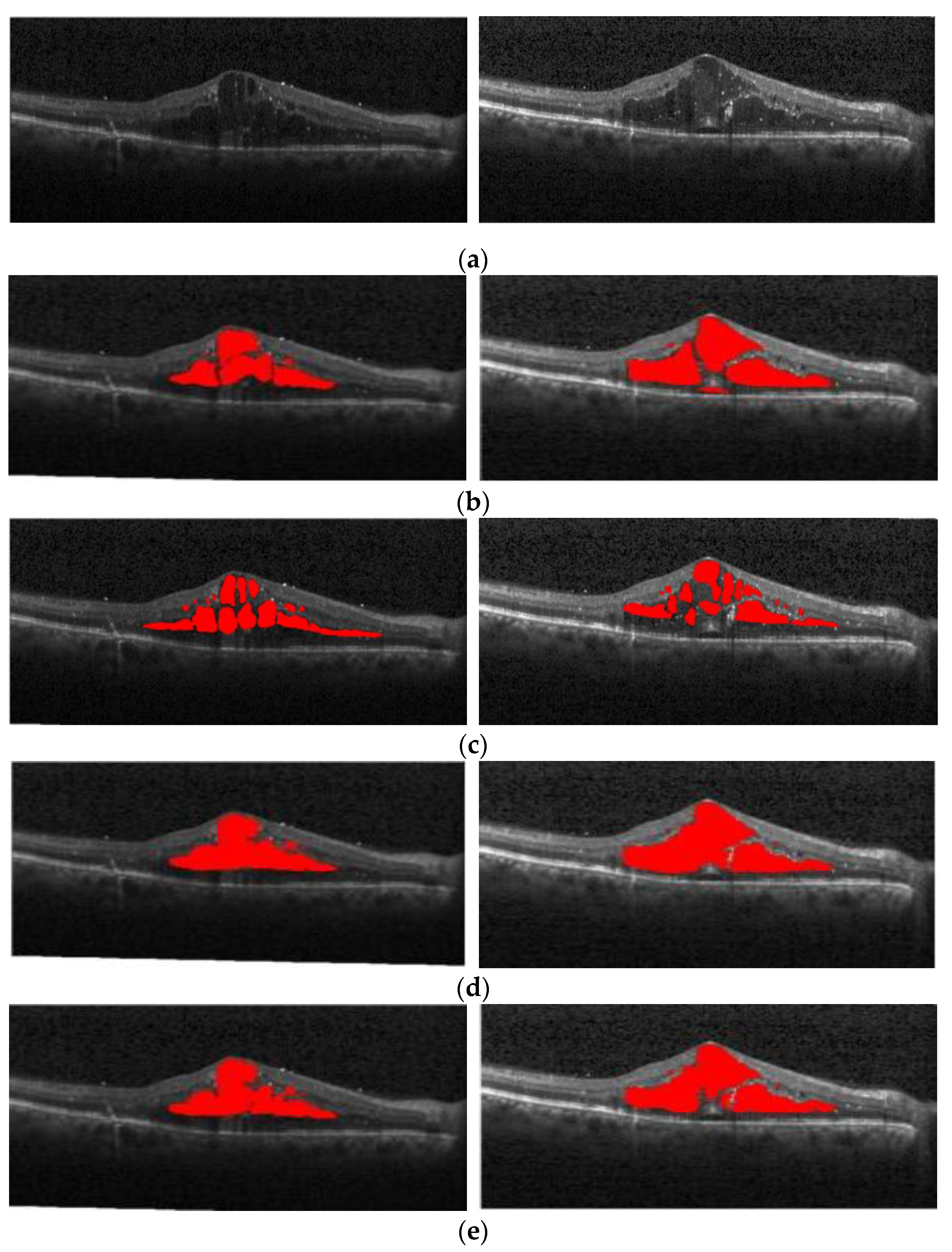 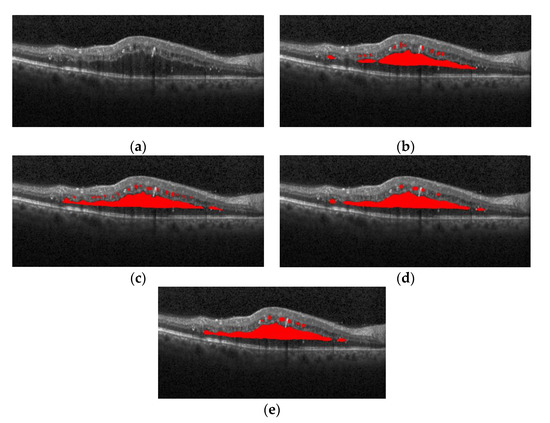 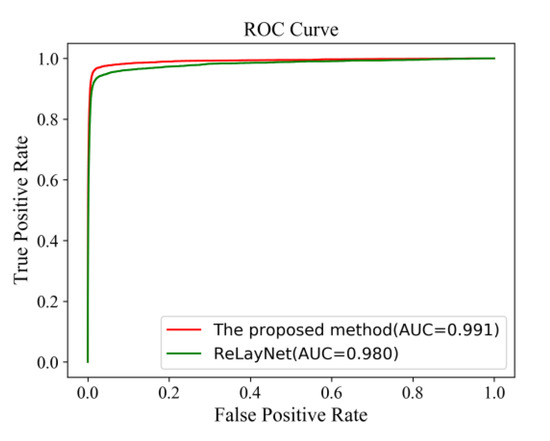 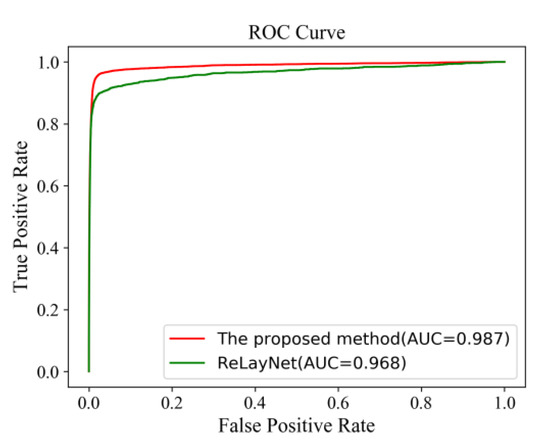