The atmospheric conditions are a strong modulator of grape berry composition, but further research is required to better understand this relationship, which is particularly pertinent under the context of climate change. The present study assesses the relationship between interannual variability in atmospheric conditions (mean, maximum and minimum air temperatures and precipitation totals) on grape berry quality attributes in three main Portuguese wine regions—Douro, Dão and Alentejo—and targets two major varieties growing in Portugal (cv. Touriga Nacional and cv. Aragonez/Tempranillo). Berry weight, titratable acidity (TA), pH, potential alcohol (PA), anthocyanins and total phenols index (TPI) data, collected two to three weeks after the end of the veraison until technological maturity, since 1999 in Douro, 2004 in Alentejo and 2008 in Dão, were selected. Meteorological data were obtained from both automatic weather stations and a climatic database defined at a very-high-resolution grid (<1 km) (PTHRES). The influence of daily mean, maximum and minimum air temperatures (November–October) and precipitation totals (April to June and July to September) on the above-mentioned berry quality parameters were first explored to identify the months/periods more influential to grape berry composition. Different statistical approaches were subsequently carried out to explore in greater detail these relationships. At technological maturity, temperature was negatively correlated to berry weight, titratable acidity, anthocyanins and TPI, but was positively correlated to pH and potential alcohol. Moreover, lowest levels of berry weight and TA (and highest levels of pH) were more frequent in warmer regions, while the opposite was seen in the cooler regions. PA, TPI and anthocyanins at maturity did not show a clear trend across regions. In addition, the maturation parameters of each site were grouped into two clusters—years where the maturation parameter is higher (cluster 1) and years where it is lower (cluster 2)—and significant differences in monthly mean temperatures between clusters were found. Overall, temperatures at veraison and maturation periods (June–August) were more influential in determining grape berry composition at harvest. The influence of precipitation was dependent on location and variety. The results also suggested that berry composition in Alentejo is more sensitive to atmospheric variability, while Aragonez seems more resilient than Touriga Nacional. These outcomes are based on a systematized and unprecedentedly large grape berry quality database in Portugal and provided the grounds for the development of grape quality forecast models, either to be used operationally in each vintage or for assessing potential modifications in berry composition in response to changing climates. View Full-Text
Keywords: climate variability; climate change; viticulture; berry quality; grape maturation; anthocyanins; phenolic compounds; Touriga Nacional; Aragonez; Portugal climate variability; climate change; viticulture; berry quality; grape maturation; anthocyanins; phenolic compounds; Touriga Nacional; Aragonez; Portugal
►▼ Show Figures 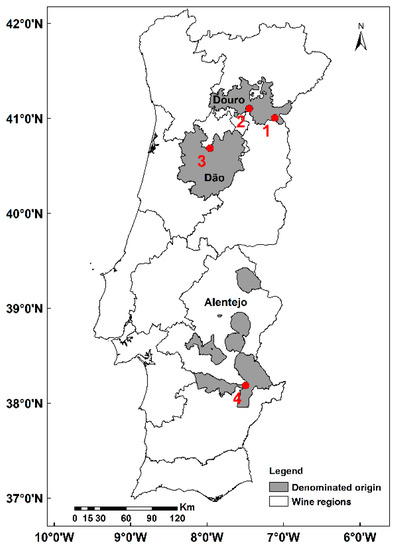