Value-Oriented and Ethical Technology Engineering in Industry 5.0: A Human-Centric Perspective for the Design of the Factory of the Future
Previous Article in Journal

The rapid development of wireless technology has accelerated the development of Vehicular Ad Hoc Networks (VANETs) to support accident prevention and the safety of a vehicle driver. VANET is a form of Mobile Ad Hoc Network (MANET), and it differs from MANET in that the network topology of a VANET changes dynamically in response to the high mobility of a vehicle and the unstable link quality due to various types of road patterns. Since most access and merging conflicts occur due to vehicle movement patterns and traffic conditions, the collision rate can be reduced if each vehicle can predict the location, movement direction, and resource occupancy information of other vehicles. In this paper, we propose a collision avoidance method based on the vehicle mobility prediction model in TDMA-based VANET. The proposed algorithm allocates time-slots of TDMA to avoid access and merging collisions by predicting the mobility of nearby vehicles using control time-slot occupancy information, vehicle ID, hop information, vehicle movement direction, and longitude and latitude of a vehicle. Simulation results show that the proposed algorithm can reduce access and merging collision rates compared with other legacy algorithms, and the performance gain of the proposed algorithm is enhanced in road environments when traffic density is high and where vehicles have high mobility and change their travel directions frequently.
Keywords: VANET; merging collision; access collision; mobility model VANET; merging collision; access collision; mobility model

Recently, the development of Vehicular Ad Hoc Networks (VANETs) has been accelerated in order to support accident prevention and the safety of vehicle drivers. The number of vehicles continues to increase worldwide, and millions of people are killed or injured by fatal accidents every year [1]. In spite of speed regulations and safety sign boards installed around the roads, technological developments in intelligent vehicle communication networks are essential for accident prevention and the safety of drivers. VANET is a form of Mobile Ad Hoc Network (MANET), but it differs from MANET in that the network topology of VANET dynamically changes, link quality is usually unstable due to the high mobility of a vehicle, there are various types of road patterns, sufficient energy and storage are supported for mobile devices installed in a vehicle, and various quality of service (QoS) are required for VANET services [2]. The applications for VANET can be divided into the following three services: safety services, traffic management, and user-oriented services. Safety services require special requirements of QoS, such as bounded transmission delays and low access delays, both of which are mandatory to offer the highest level of user safety. On the other hand, traffic management services are required to be provided according to vehicle density and data traffic load, and user-oriented services need a high bandwidth. As such, from the perspective of the various requirements of VANET services, medium access control (MAC) plays an important role in VANET. In particular, it is noticed that, from the perspective of safety services, MAC should be able to periodically broadcast a safety-related message that includes useful information such as vehicle accident alerts and road conditions [3].
Wireless Access in Vehicular Environment (WAVE) based on IEEE 802.11p and IEEE 1609 standards is a representative standardization study of Intelligent Transport Systems (ITSs) using VANET technologies, which is designed to be suited for the characteristics of vehicles such as high mobility and short communications time. WAVE is based on competition-based resource allocation that provides priority-based access using both EDCA (Enhanced Distributed Channel Access) and Carrier Sense Multiple Access with Collision Avoidance (CSMA/CA). The contention-based resource allocation scheme can guarantee low data transmission delay and high user QoS when traffic density is low. However, if offered traffic load and the mobility of the terminal is high, collision probability increases. Accordingly, the data transmission delay increases and the user QoS deteriorates, so that it is not possible to effectively prevent the accident in the VANET environment.
To overcome the shortcomings of IEEE 802.11p and facilitate efficient communication in VANET, Time Division Multiple Access (TDMA)-based contention-free MAC protocols have been proposed. There are two types of TDMA-based MAC protocols for VANET systems; distributed TDMA and centralized TDMA. In distributed TDMA, each vehicle allocates and manages its own resources and communication with 1-hop neighbors [4]. In contrast, in centralized TDMA, the resource allocation/management of each vehicle is managed by a roadside unit (RSU) or a central coordinator [5,6]. However, vehicles traveling at high speed have short dwelling times to stay within the coverage of an RSU, which results in frequent resource collisions. In addition, to support seamless communication for fast moving vehicles, the number of RSUs installed per unit-area increases, and consequently, there are disadvantages of mutual interference between RSUs and collision of resource allocation by hidden nodes in the cluster.
In a TDMA-based VANET system, a frame is usually divided into a control channel and a service channel. Each vehicle generates and transmits a safety message including vehicle information, and this message is periodically delivered to 1-hop neighbor vehicles via the control channel. The service channel is used to transmit non-secure messages such as video, audio, and emergency messages. A resource collision in the control channel affects the QoS of the application provided by the service channel of each vehicle. Specifically, in a TDMA-based VANET protocol, there are two kinds of collisions. First, an access collision occurs when multiple vehicles within a 2-hop communication range attempt to acquire the same available time-slot at the same time, as shown in Figure 1. Second, a merging collision occurs when multiple vehicles using the same time-slot get close to each other within a 2-hop communication range due to the mobility of a vehicle. For example, as in Figure 2, suppose that vehicle 3 and vehicle 4 occupy the second time-slot of the frame. At first, since the two vehicles are more than two hops away from each other, there is no resource conflict. However, the two vehicles are moving towards each other, which will result in a merging collision in the near future.
In this paper, we propose a prediction-based collision avoidance algorithm in VANET. The proposed algorithm is designed to recognize the existence of vehicles far away more than 2 hops and the collision probability of vehicles more than 2 hops away are effectively predicted in the proposed algorithm by using the vector-based prediction model. Because the proposed algorithm is based on the vector mobility of a vehicle, it has the advantage of predicting vehicle movements against other protocols, which enables the proposed algorithm to enhance the performance of collision rate compared to other direction-based algorithms.
The remainder of this paper is organized as follows. Section 2 explains related works on representative distributed TDMA-based MAC protocols VANET. Section 3 explains the operational procedure, mobility model, and frame/message structures of the proposed model. Section 4 provides the analysis of access/merging collision probabilities under the proposed model. In Section 5, we evaluate the performance of the proposed algorithm and compare its performance with those of other collision avoidance methods. We conclude in Section 6.

In this section, we propose a vector-based mobility model that can be used to predict resource collision in any kind of road environment, which considers speed, acceleration/deceleration, and the vector-based moving direction of each vehicle. In the proposed algorithm, each vehicle periodically broadcasts a FI message to its 1-hop neighbor vehicles through the control time-slot, like previous VeMAC, CFR MAC, and PTMAC. Neighbor vehicles receiving the FI message can predict the moving direction and the position of each vehicle through the proposed algorithm. In the following subsections, we explain the frame and FI message structures, a control time-slot occupation procedure, collision detection/prediction procedures, and a collision avoidance procedure, all of which are necessary to facilitate the proposed vector-based mobility model.

Figure 7 shows the frame structure and FI message format to support the proposed algorithm. Each frame consists of C control time-slots and D data time-slots. Each vehicle searches for a control channel when entering the network and occupies one unused control time-slot. Each vehicle transmits an FI message through the occupied control channel. The FI message includes the ID of neighbor vehicles together with that of itself, the hop information of each vehicle, the traveling direction, the location (longitude and latitude), the occupied control time-slot, the current speed, and the acceleration. “ID Info” of each vehicle is used as the identification information. “Hop Info” expresses itself and the n-hop neighbor vehicle as “0” and “n”, respectively. “Direction Info” indicates how far the vehicle has rotated clockwise relative to the north at zero degrees. “Longitude and Latitude Info” are converted into x, y coordinates using TM (Transverse Mercator) coordinates. “Time-slot Info” represents the occupied time-slot information of a vehicle. “Speed Info” is the speed of a vehicle, and “Acceleration Info” represents how much the speed of a vehicle has changed during the unit time.

In this section, we analyze the access/merging collision rates. The parameters used are summarized in Table 1.
It is noted that the distance between vehicle i and vehicle j at time is estimated as

In this paper, we propose a vector-based mobility prediction model that aims to avoid merging or access collisions between vehicles by predicting the anticipated movement position and direction of each vehicle. The frame and the FI message structures to support the proposed algorithm are proposed and the procedures for control time-slot occupation, collision prediction/avoidance are explained. The performance of the proposed algorithm is evaluated in various road environments such as a highway, an intersection with/without traffic lights, and a circuit intersection. The results show that the proposed algorithm reduces access and merging collisions compared to existing PTMAC, VeMAC, and CFR MAC algorithms. In particular, it has been shown that the performance gain of the proposed algorithm is enhanced in road environments where the traffic density is high and where vehicles have high mobility and change their travel directions frequently.

This research was supported by the MSIT(Ministry of Science and ICT), Korea, under the ITRC(Information Technology Research Center) support program (IITP-2020-2018-0-01799) supervised by the IITP (Institute for Information & communications Technology Planning & Evaluation), and by the National Research Foundation of Korea(NRF) grant funded by the Korea government(MEST) (No.NRF-2020R1A2C1010929). 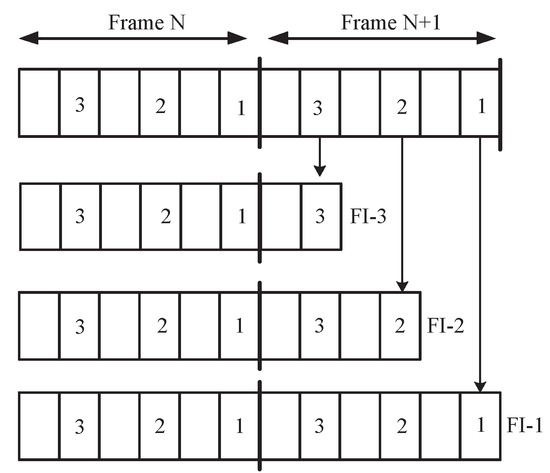 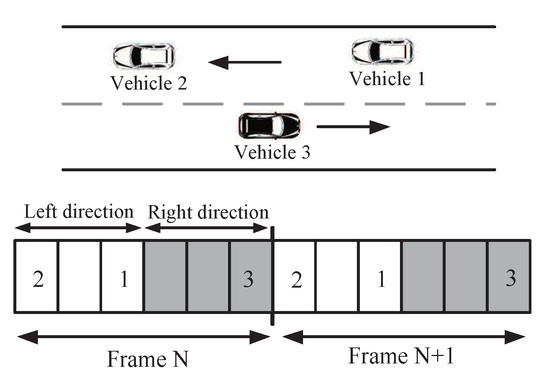 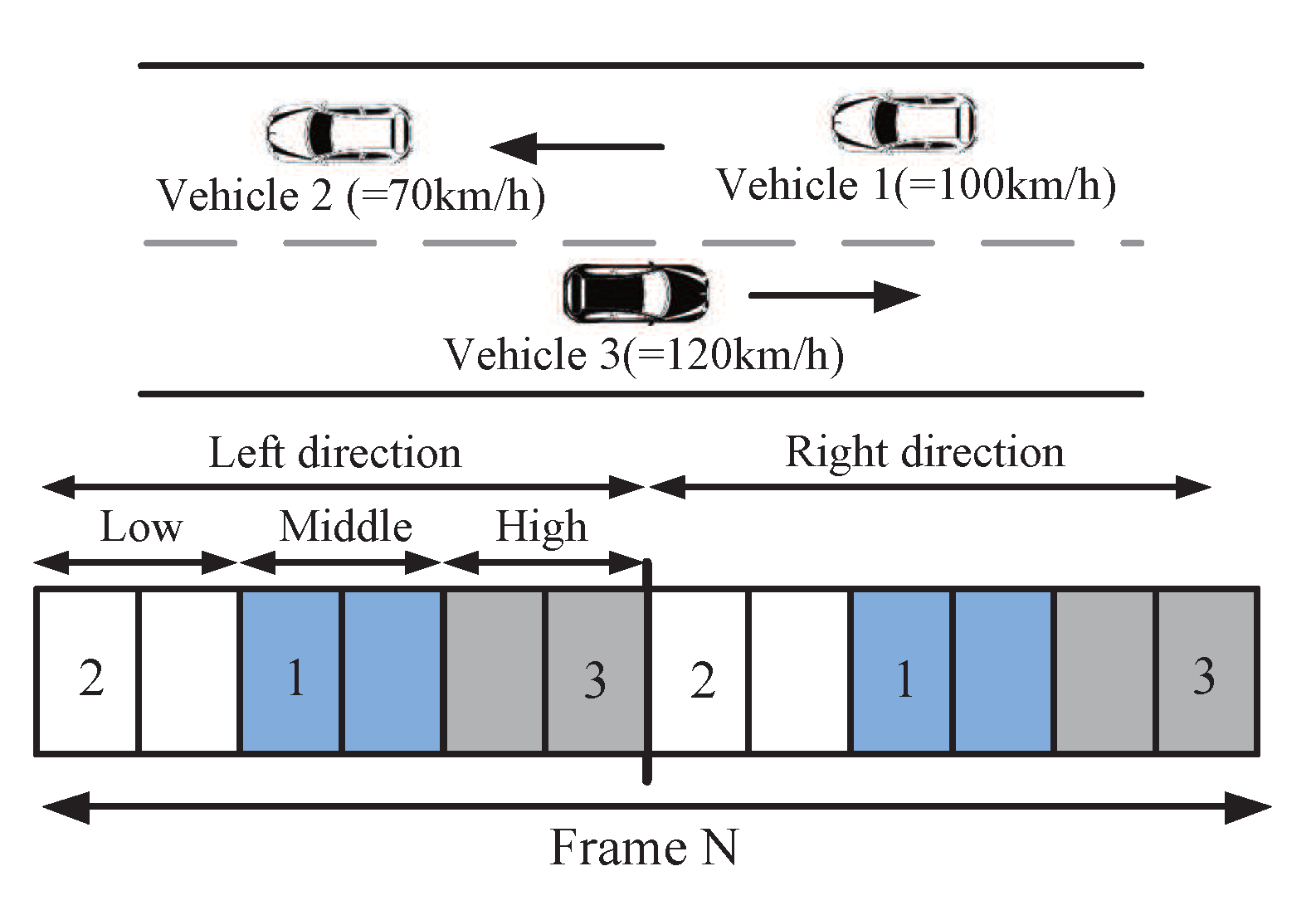 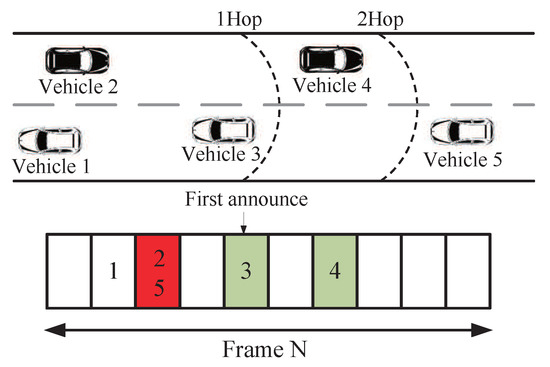 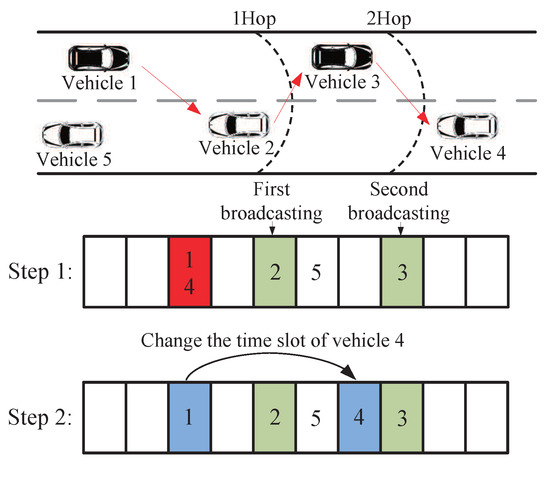 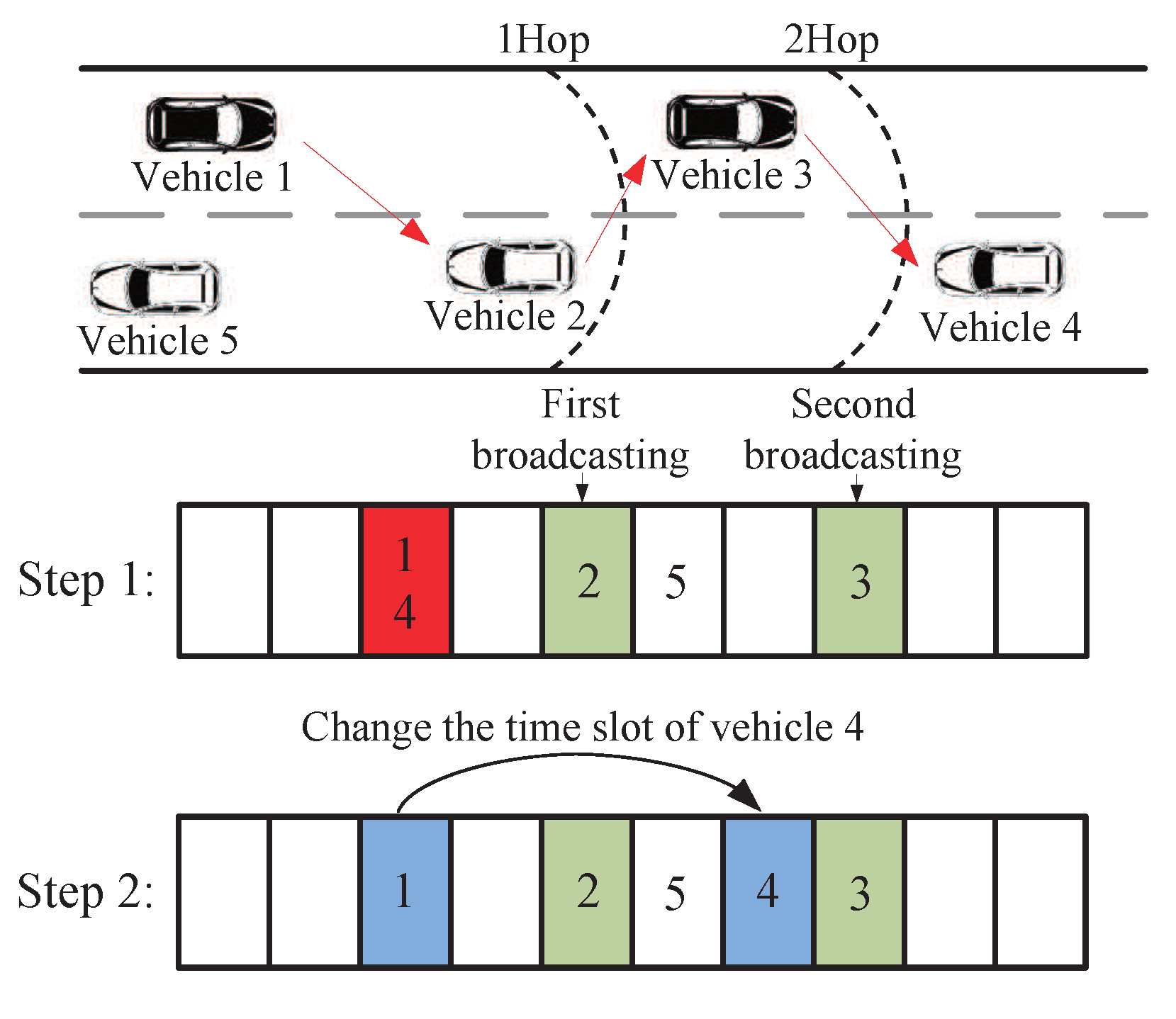 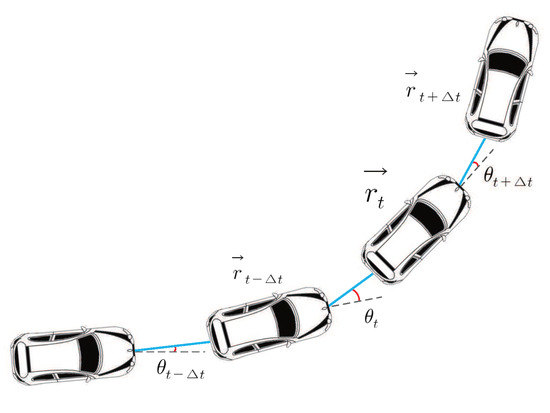 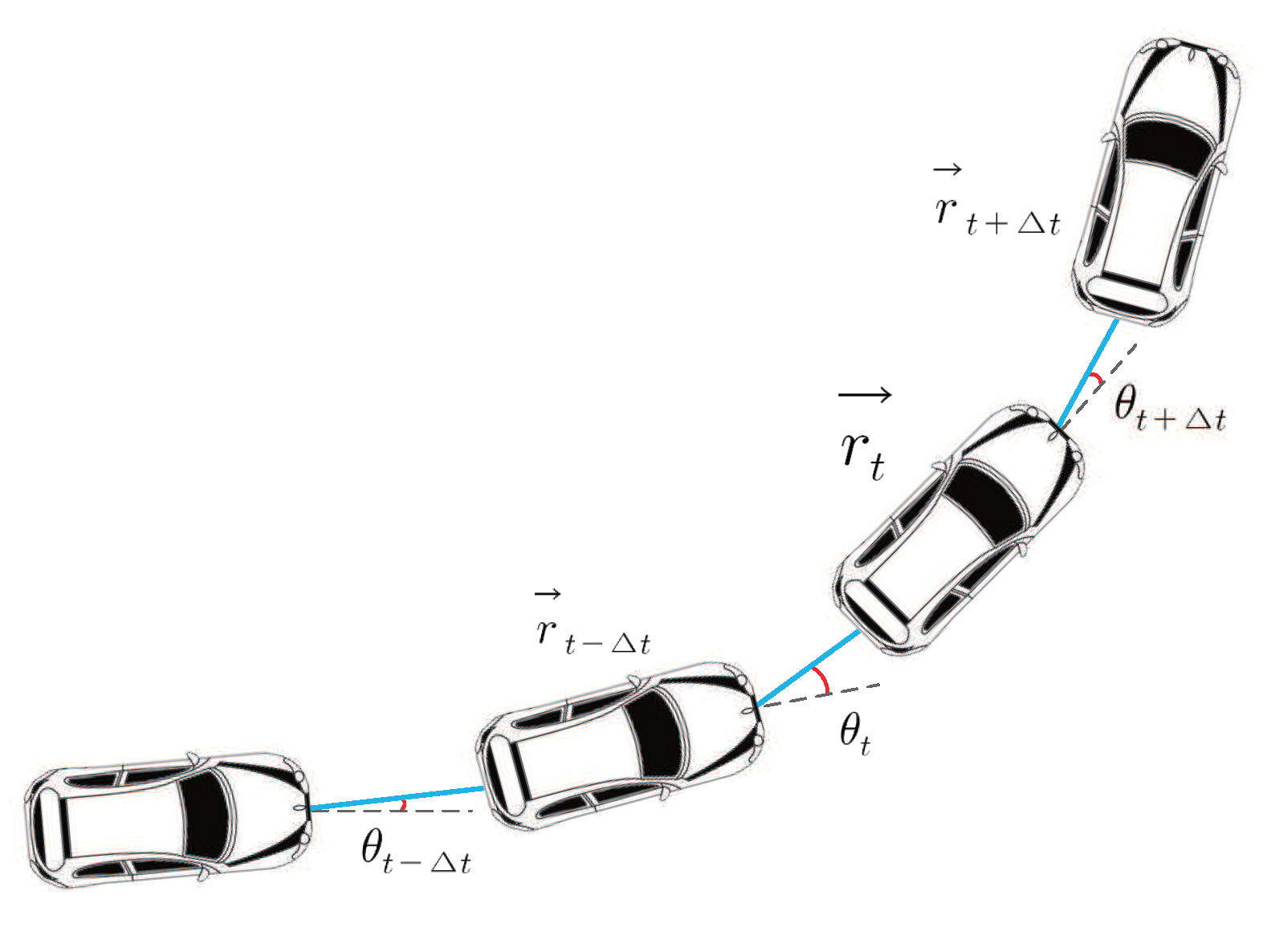 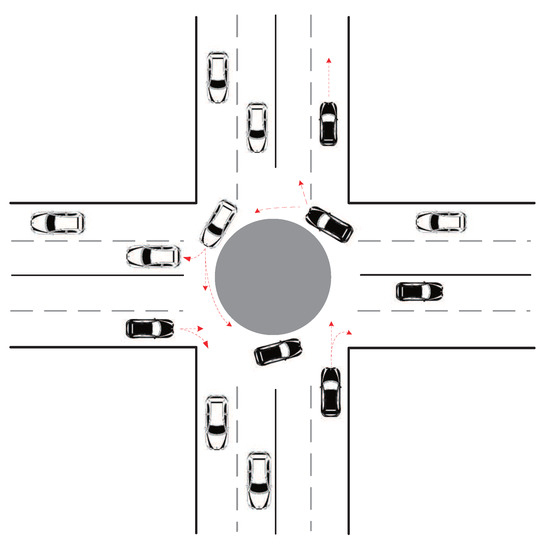 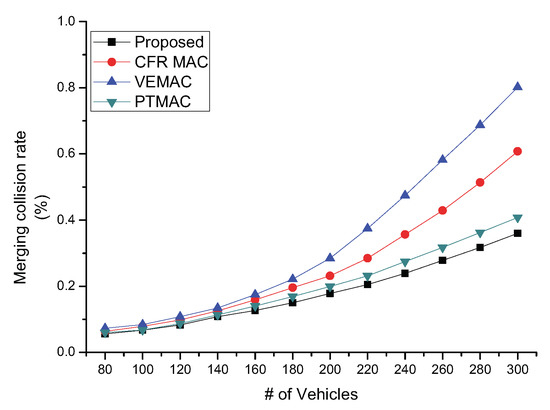 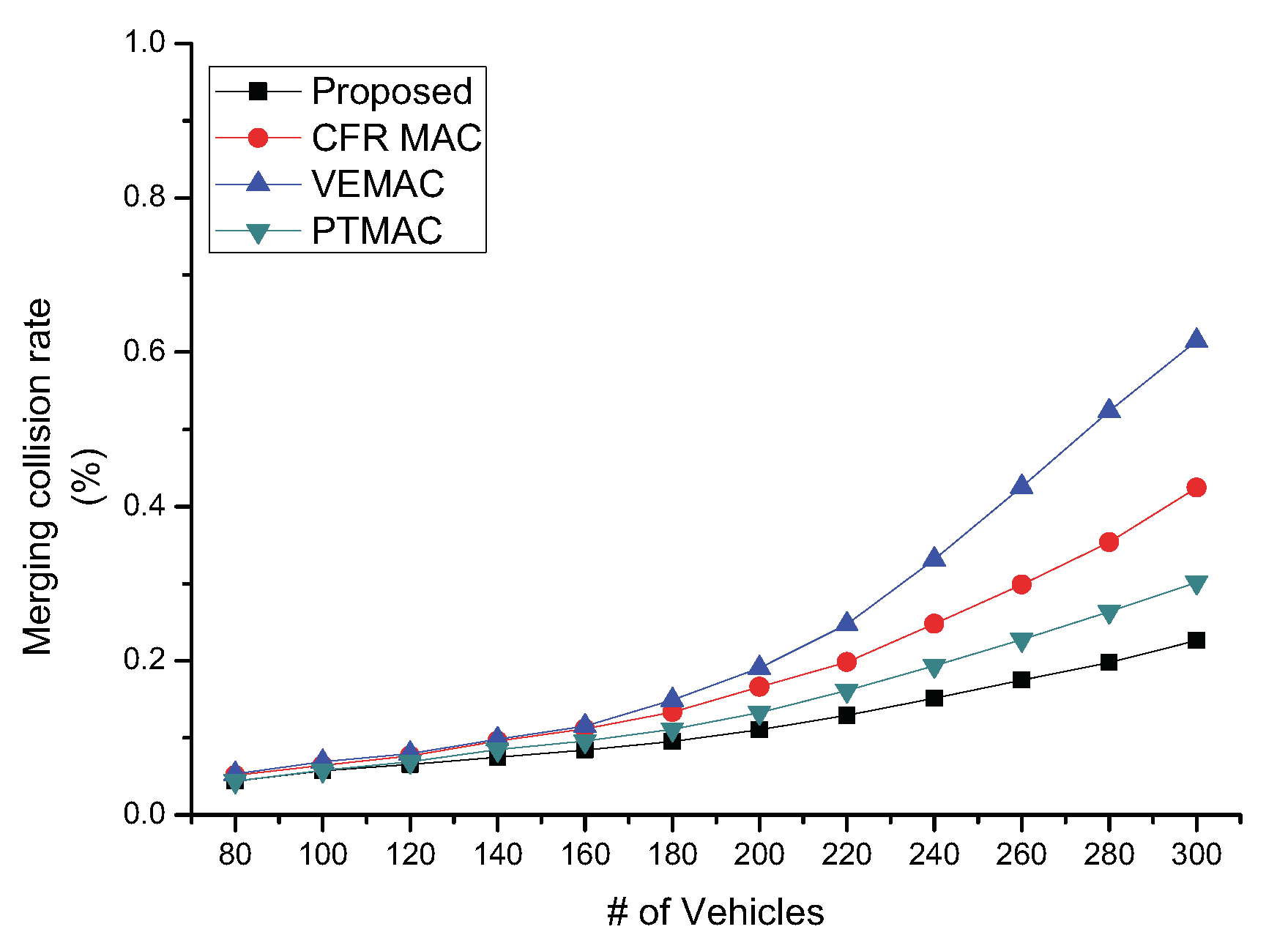 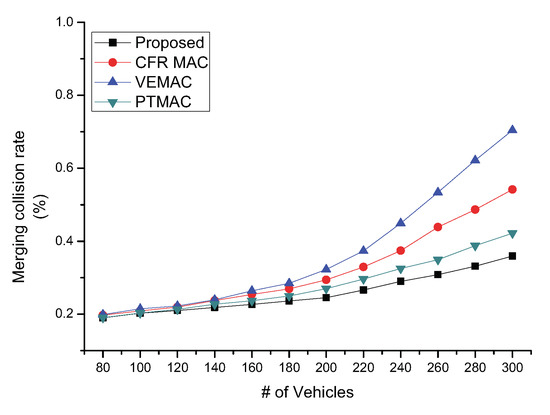 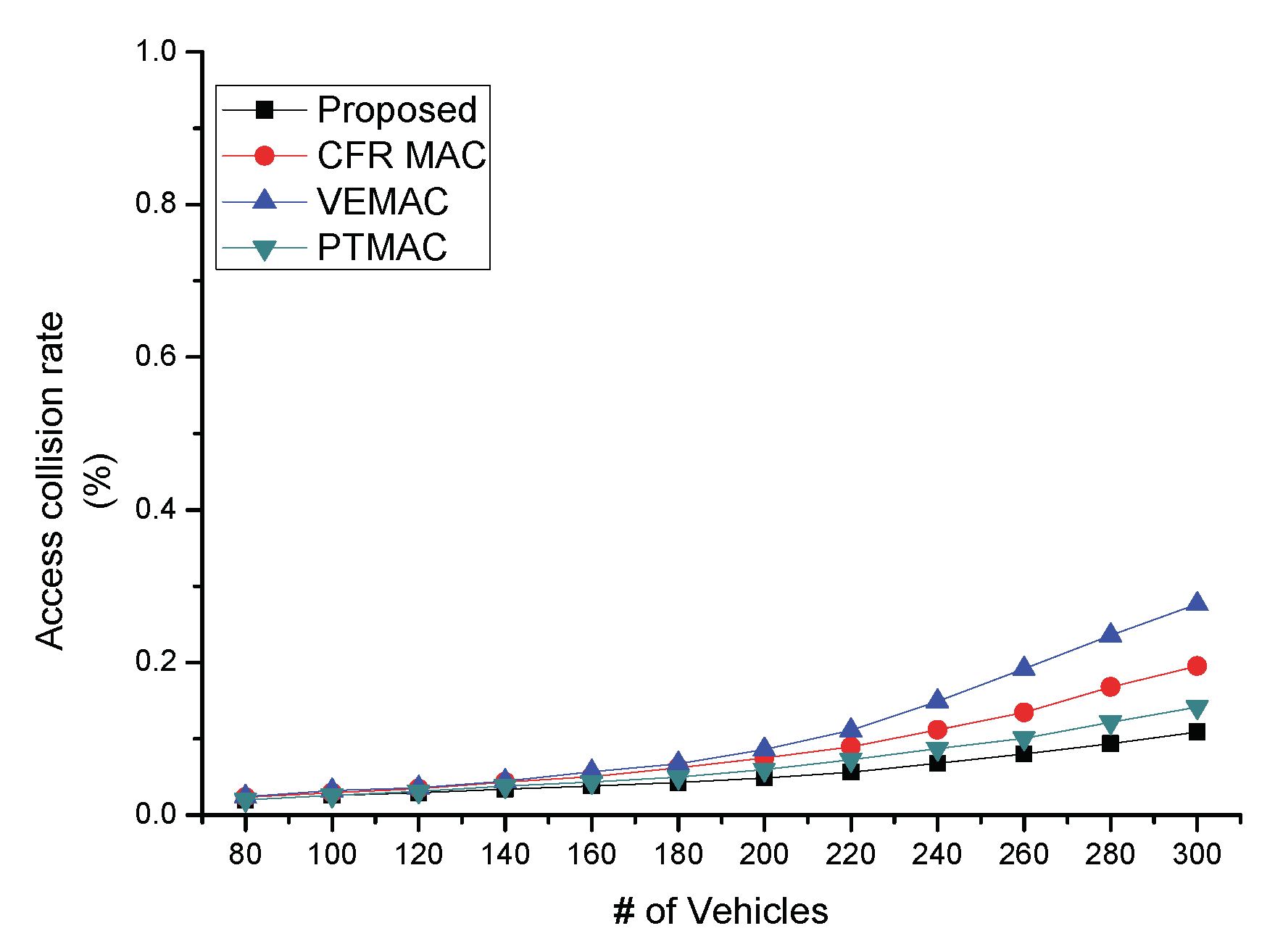 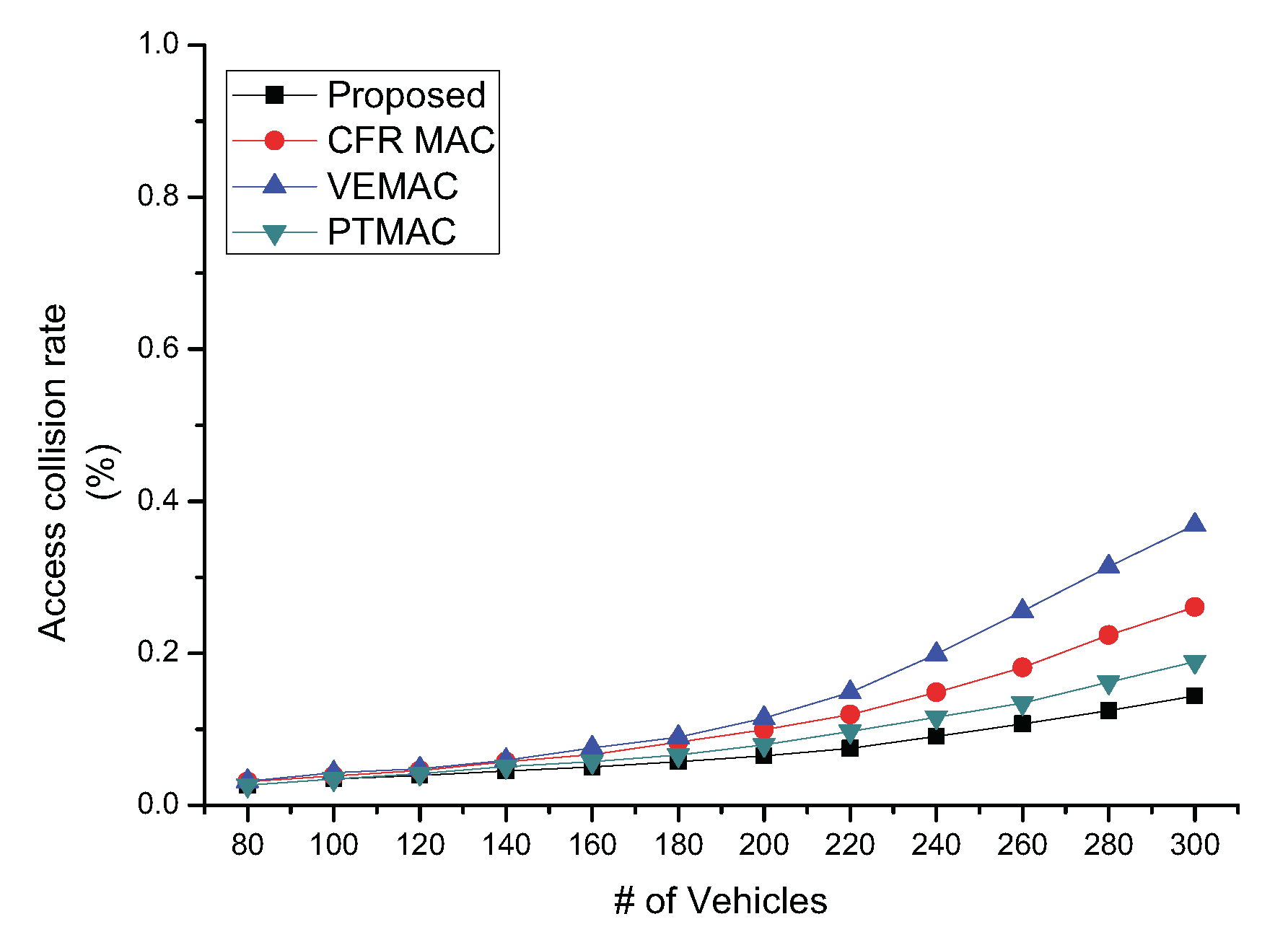 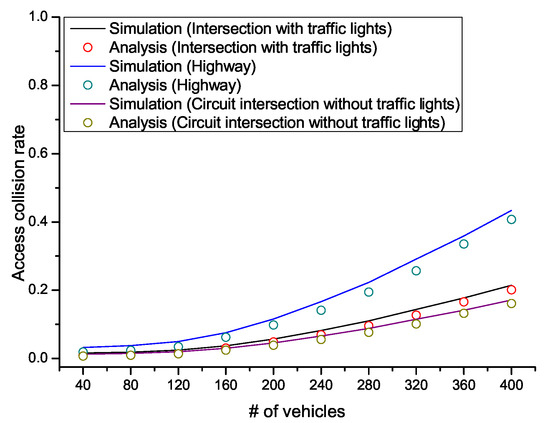 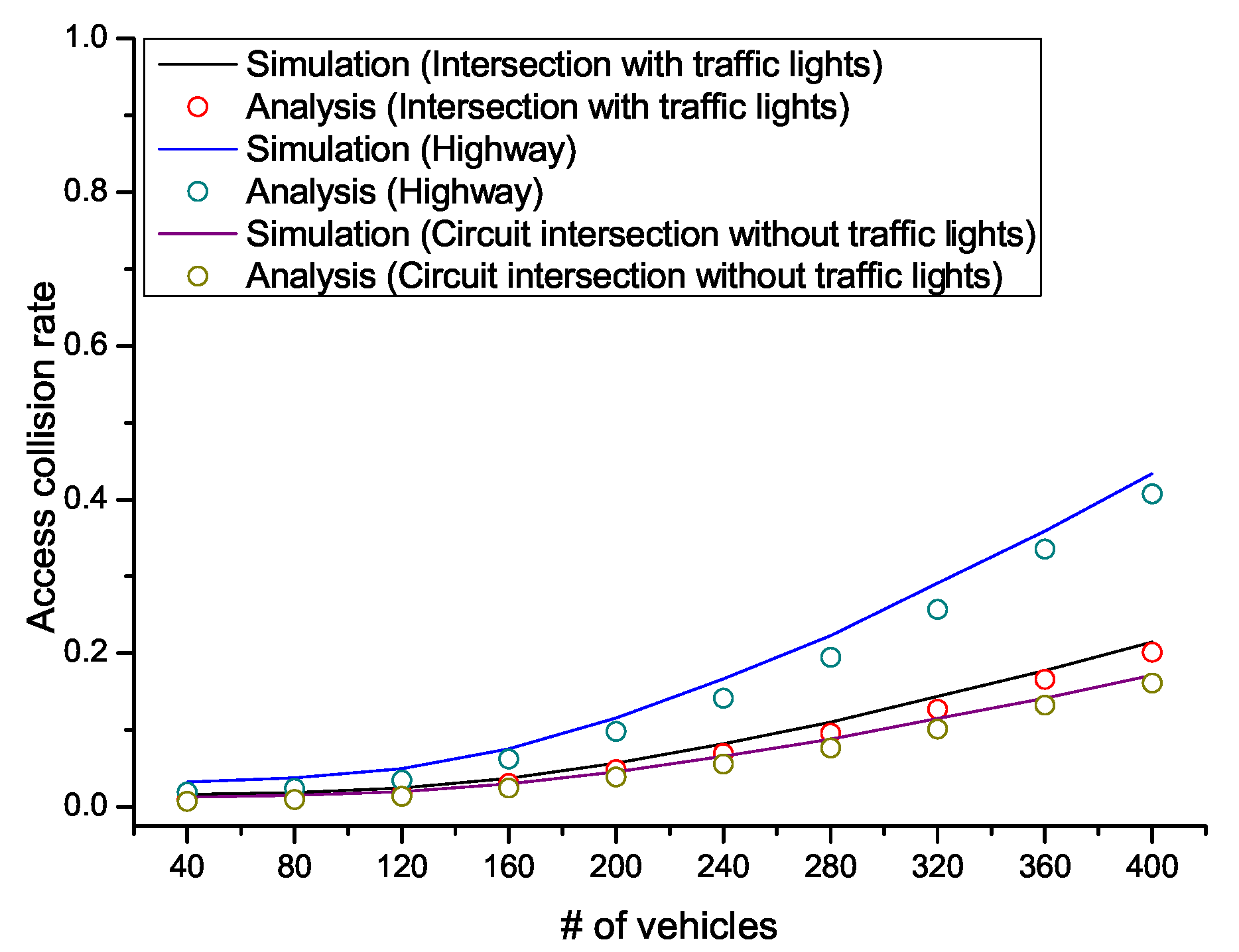 Table 2. Simulation parameter.
Table 2. Simulation parameter.
© 2020 by the authors. Licensee MDPI, Basel, Switzerland. This article is an open access article distributed under the terms and conditions of the Creative Commons Attribution (CC BY) license (http://creativecommons.org/licenses/by/4.0/).
We use cookies on our website to ensure you get the best experience. Read more about our cookies here.
Accept
We have just recently launched a new version of our website. Help us to further improve by taking part in this short 5 minute survey here. here.
Never show this again