Bonded natural stone pavement has been typically used in historical neighborhoods to satisfy functional and architectural aesthetic standards. Despite its advantages, it has been barely applied to places for heavy traffic volume or high travelling speed because of various structural failures in joints and bedding courses. Ultra-rapid-hardening mortar for natural stone pavement was considered as an alternative to minimize these failures. The objective of this study is to develop bound stone pavement using the ultra-rapid-hardening mortar for high traffic volume and evaluate throughout by carrying out material tests, plate load test, accelerated pavement test (APT), and falling weight deflectometer (FWD) test. For the tests, four types of pavements, asphalt, concrete block, and two bound stone pavements, were produced in a testing facility. The bearing capacity of the sub-base course, which was asphalt and concrete, showed values 1.62 and 2.64 times higher than deemed satisfactory. Additionally, rut depth was measured using a transverse profile logger during the APT test and the test was terminated at 1.97 million cumulative equivalent single axle loads (ESALs). In the rut depth measurements, the deepest deflection (16.0 mm) was made in the asphalt pavement and the depth of the concrete block pavement was 4.5 mm. Vertical displacements of 3.0 and 1.5 mm were obtained in stone pavements A and B, respectively. The maximum pavement vertical deflection response was recorded at 0, 0.4, and 1.97 million ESALs. The response results revealed that they were influenced by the material types of either bedding or sub-base courses. With these outcomes, it would be possible to apply the baseline data for designing rigid small element pavement for heavy traffic volume or high travelling speed roads. View Full-Text
Keywords: small element pavement; rapid-hardening mortar; accelerated pavement test; rut depth; falling weight deflectometer test small element pavement; rapid-hardening mortar; accelerated pavement test; rut depth; falling weight deflectometer test
►▼ Show Figures 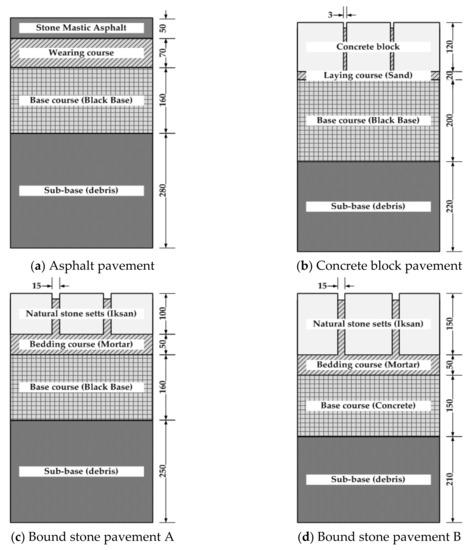