A Deep Learning Model for Estimation of Patients with Undiagnosed Diabetes

Porcelain insulator samples are collected from various power transmission lines of South Korea with 25,000 pounds operated at 154 kV. These are discarded from utility systems to access the condition of similar samples. It has been categorized into different pollution levels. In South Korea, pollution grades are divided into A, B, C, and D in ascending order of pollution level. This is classified as the distance from the coast and Class D is the most polluted. Table 1 depicts relevant specifications of samples collected. The dependence of corrosion on geographical features are analyzed on 154 kV porcelain insulators. The corrosion mechanism of the cap is mainly galvanic corrosion while that of the pin is primarily electrolytic and crevice corrosion as well as galvanic corrosion. Figure 2 shows samples of insulators used for different lengths of time. For the insulator used in Daejeon for 38 years, the cap was only slightly rusted but the pin corrosion was advanced. For the insulator used in Gangneung for 40 years, although there were numerous scratches on the cap, the pin showed little rust. For the insulator used in Dae-gu for 48 years, there was substantial rust on one side of the cap and a smaller amount at the pin. For the insulator used in Namyangju for 51 years, corrosion of the cap and pin was not very severe. Based on the observation, it was found that the degree of corrosion and rate of corrosion were more dependent on where the insulators were installed rather than the service time of the insulator. The factors required to calculate the rate of corrosion are decreased in metal weight during the reference time period, density of the metal, total initial surface area of the metal, and the length of the service period [4,5,6]. Therefore, samples in service for the same duration—38 years—but in different locations were compared. The effect of geographical location on corrosion and corrosion rate—i.e., the environmental conditions—was studied.

Figure 3 shows a cross-section of a porcelain insulator. The cap and pin are made of iron, which is easily corroded when it comes in contact with water and oxygen. The following describes the rust generation process.
(A) Iron oxidation:
Fe → Fe2+ + 2e− Fe2+ → Fe3+ + e−
(B) Oxygen reduction:
O2 + 2H2O + 4e− → 4OH−
(C) Red color formation:
2Fe3+ + 6OH− → Fe2O3∙3H2O (rust)
For the cap, the main corrosion mechanism is galvanic corrosion. However, galvanic, electrolytic, and crevice corrosion may occur at the pin.

To prevent corrosion, the cap and pin are coated with more than 70-µm-thick zinc. The role of zinc is galvanic protection and oxide film formation. Galvanic corrosion occurs when two different metals in an electrolyte come into contact with each other, which causes a current to flow between them. As a result, the corrosion of metals with high corrosion resistance (cathode) is suppressed and the corrosion of metals with high activity (anode) is promoted. When iron and zinc are in contact, if the iron is exposed due to a defect or scratch, it gradually becomes cathodic.
Fe3+ + e− → Fe2+
Meanwhile, the Zn becomes increasingly anodic.
Zn2+ + 2e−→ Zn
Therefore, the iron is protected until the zinc is fully corroded by water and oxygen. In a neutral state where oxygen is dissolved, zinc first causes the following corrosion reactions.
Anode reaction:
Zn → Zn2+ + 2e−
Cathode reaction:
1/2O2 + H2O + 2e− → 2OH−
Zn(OH)2, which is not soluble in water, is formed by binding a zinc ion (Zn2+), which is generated in the anode reaction, and hydroxide ion (OH−), which is generated in the cathode reaction. This zinc hydroxide film is stable in the pH range of 6 to 12 and acts as a barrier against the diffusion of oxygen, which suppresses the corrosion of zinc. Figure 4 shows the PH dependence of the zinc corrosion rate. In an actual fresh water environment, a complicated surface film—composed of zinc oxide (ZnO) and basic carbon zinc (2ZnCO3•3Zn (OH)2)—as well as zinc hydroxide are formed by the action of various dissolved ions. The corrosion rate of zinc in distilled water shows a relatively high value of approximately 0.25 mm/y at a pH of 7. However, the surface coating formed in actual fresh water serves as a protective film for suppressing the zinc corrosion rate to a much lower level [7,8].
The movement of oxygen to the zinc surface is a very important factor in the film formation. A sufficient supply of oxygen to the zinc surface is required to maintain the film. If oxygen is not sufficiently transferred to the zinc surface, a defect presents in the coating and the zinc formula begins. The surrounding area covered with the film not only becomes a cathode with a higher electric potential than that of the zinc itself, but also expands the area compared to the zinc anode, which prompts the anode elution of the exposed zinc. Eventually, the iron base material is exposed. At this time, the galvanized layer covered with the surrounding coating fails to serve as a sacrificial anode because the polarity is reversed with respect to the iron, and the valuable potential of the zinc plating surface accelerates the corrosion of the exposed iron matrix.
As the pH changes from neutral to acidic, the zinc corrosion rate increases. This is because the basic materials—such as zinc oxide, zinc hydroxide, and basic carbonate salts—constituting the protective coating on the zinc surface are neutralized in the acidic environment and disappear.

Leakage current can flow in a contaminated wet insulator. If this leakage current contains a DC component, electrolytic corrosion may occur [9]. The diameter of the pin may then be reduced and its mechanical strength weakened. A zinc sleeve—a sacrificial electrode—is sometimes inserted to protect the pin from this electromotive force [10].

Crevice corrosion is localized corrosion that occurs in the gap between a metal and non-metal. For an insulator, crevice corrosion occurs where the pin is in contact with the cement.
Figure 5 shows the pin parts of the insulator specimens subjected to external corrosion. The diameters of the pins for the inside of the cement, the beginning of the exposure, and the vicinity of the pinball are measured. Since the pin sample is cut in half, it can be measured smaller than the original diameter, but the relative change in the diameter according to the pin position can be identified. When visually observed, it can be seen that the corrosion of the exposed part is more advanced than that in the cement. It can be seen that the degree of corrosion slows down from the beginning of the exposed part to the pinball part. Similarly, the pin diameter at the inner and outer boundaries of cement was the smallest at 17.0 mm compared to the periphery. When severe crevice corrosion occurs, the middle of the pin gets extremely thin and may be broken.

When rust forms on connection parts, it becomes impossible to attach and detach porcelain insulators during maintenance. If a special load—such as typhoon, ice, snow, or earthquake—is applied, or flexibility is required for repair work, the connection part may break. As the service life increases, the cement inside the cap deteriorates, and the inside of the cap is exposed such that corrosion may occur. To prevent this, a zinc ring is sometimes installed between the porcelain and cap [11].
For the case of the pin, a rusted pin may expand and cause breakage of the porcelain. When crevice corrosion occurs at the interface between the cement and pin, the diameter of the pin decreases and, in the worst case, the connection is broken. Figure 5 shows the corrosion at the pin of a porcelain insulator and Figure 6b shows a broken pin due to the severe crevice corrosion.

Figure 7 shows the corrosion rates of zinc at different thicknesses and environments. It is reported that repair or replacement is needed when rusting of the metal surface is at 5%. For example, at a zinc thickness of 75 µm, the steal will last for approximately 56 years in industrial areas, or more than 100 years in the rural area [12,13,14]. It is known that corrosion is affected by sea salt and pollution. In coastal areas, NaCl accelerates corrosion and, in industrial areas, corrosive gases (SO2, NOx, and Co) are released, which cause acid rain. Normal rainfall has a relatively low pH of 5.6 because of dissolved carbon dioxide. However, most rainfall is pH less than 5.6 due to SOx and NOx. The strict definition of acid rain is rain with a pH lower than 5.6. However, rain is more commonly referred to as acid rain when the pH is 5 or more. In 2006, the average monthly pH values of rainfall in Gangneung, Daejeon, Daegu, Busan, and Ulsan were 5.52, 4.81, 5.61, 5.69, and 4.90, respectively [8,9,10,11,12,13].
Figure 8 shows the caps and pins of insulators gathered from Daejeon, Ulsan, and Busan. Although the average pH values of rainfall in Daejeon and Ulsan are similar, it is notable that rainfall in Ulsan is very acidic during the winter since Ulsan is an industrial city. The considerable progress of erosion found in Ulsan can be attributed to acid rain caused by pollutants—such as SOx and NOx—from factories and automobile exhaust. Comparatively, the corrosion found in the insulators used in Busan was due to NaCl, since Busan is a coastal city. From the images in Figure 8b collected from the Ulsan site with rainfall having a pH of 4.90 is less rusted than the other two samples taken from Daejeon with a pH of 4.81 and Busan with a pH of 5.69. On the other hand, erosion is more pronounced on the Ulsan sample. Thus, NaCl causes less rust but more erosion. For the insulator used in Daegu for 48 years, there was substantial rust on one side of the cap and a smaller amount at the pin. This is due to the direction of wind flow. The contaminants will deposit on one side of the porcelain insulator [15]. Moreover, the direction of wind flow also decides the direction of corrosion propagation as observed in the previously mentioned sample.

This article focuses on corrosion in the porcelain insulator and its dependency on geographical conditions of the region. Different kinds of corrosion that occur in the pin and cap have been reported. The cap and pin of a porcelain insulator are made of iron. It is well known that, as time passes, iron rusts. The methods to prevent corrosion have been investigated. The investigation of porcelain insulators gathered from different regions in Korea used for different lengths of time shows that the geographical environment affects corrosion more than the served lifetime. The amount of acid rain and sea salt that causes rapid rusting is dependent on the geographical environment. Thus, when calculating the lifetime of porcelain insulators, the location where they are to be installed should be considered. Recently, new materials—such as PosMAC, which is a strong alloy made of magnesium, zinc, and aluminum—have been reported as being much more effective than zinc in preventing corrosion. Still, to prolong the lifetime of porcelain insulators, further study is required in which the application of new materials or use of a waterproof coating (in addition to the zinc coating) could be examined.

This research was funded by Korea Electric Power Corporation R16TA29. 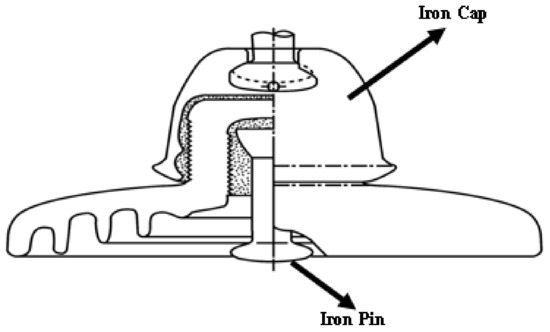 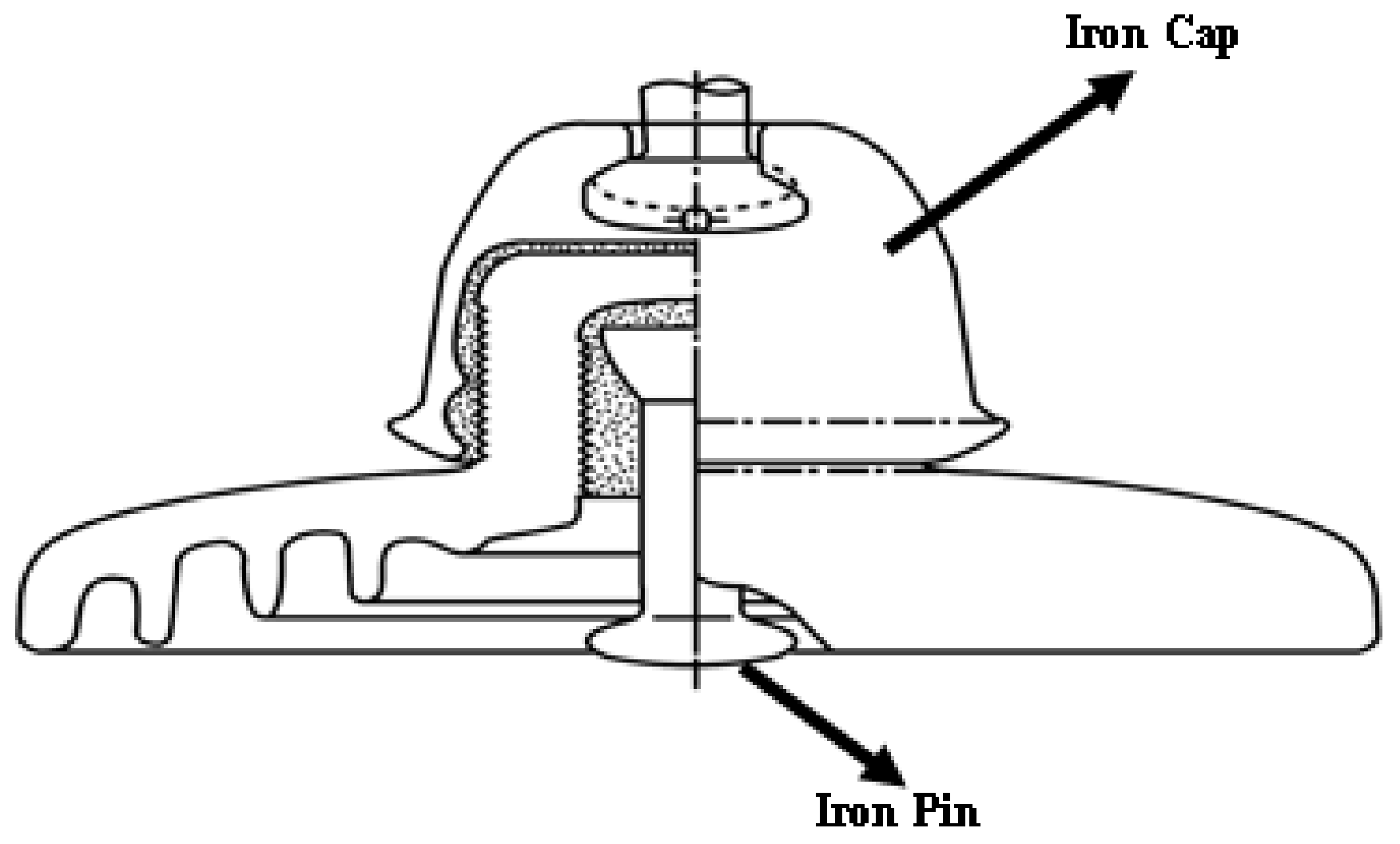 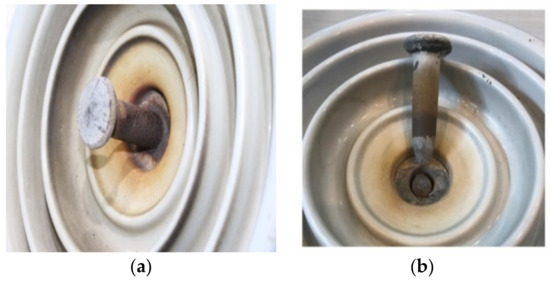 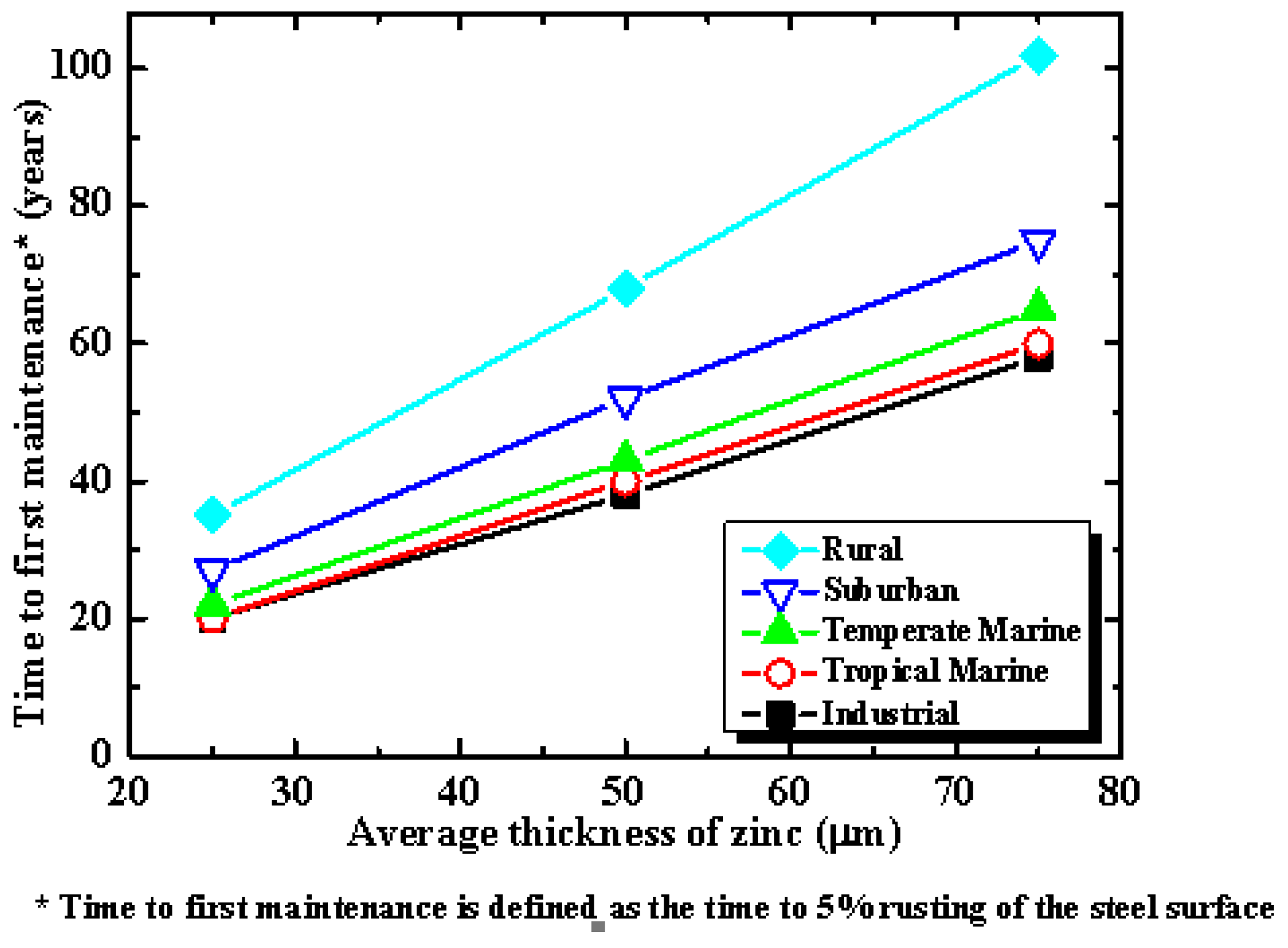 Table 1. Samples.
Table 1. Samples.
© 2020 by the authors. Licensee MDPI, Basel, Switzerland. This article is an open access article distributed under the terms and conditions of the Creative Commons Attribution (CC BY) license (http://creativecommons.org/licenses/by/4.0/).
We use cookies on our website to ensure you get the best experience. Read more about our cookies here.
Accept
We have just recently launched a new version of our website. Help us to further improve by taking part in this short 5 minute survey here. here.
Never show this again