Industrial Energy Transitions and the Dynamics of Innovation Systems: The Swedish Pulp and Paper Industry, 1970–2010
Previous Article in Journal

Seaweed, a popular seafood in South Korea, has abundant dietary fiber and minerals. The toxicity of arsenic compounds is known to be related to their chemical speciation, and inorganic arsenic (iAs) is more detrimental than other species. Due to the different toxicities of the various chemical forms, speciation analysis is important for evaluating arsenic exposure. In this study, total arsenic (tAs) and six arsenic species (arsenite, arsenate, monomethylarsonic acid, dimethylarsinic acid, arsenobetaine, and arsenocholine) were analyzed in 180 seaweed samples. Although there were differences between seaweed species, the concentration of tAs was detected at levels ranging from 1 to 100 µg/g, and the distribution of six arsenic species differed depending on the seaweed species. No correlation between the concentration of iAs and tAs was found in most seaweed species. Through statistical clustering, hijiki and gulfweed were seen to be the seaweeds with the highest ratios of iAs to tAs. Using the iAs concentration data from the arsenic speciation analysis, a risk assessment of seaweed intake in South Korea was conducted. The margin of exposure values showed no meaningful risk for the general population, but low levels of risk were identified for seaweed consumers, with high intakes of gulfweed and hijiki. View Full-Text
Keywords: arsenic speciation; seaweed; monitoring; risk assessment arsenic speciation; seaweed; monitoring; risk assessment
►▼ Show Figures 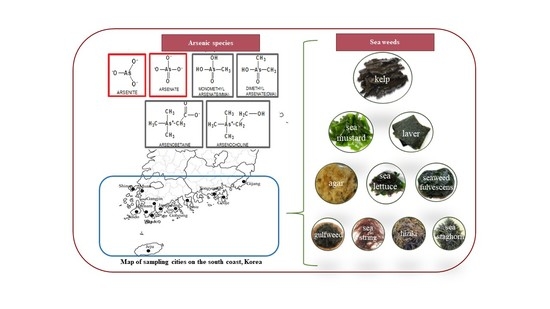