Uptake of Trace Elements in Leaves of the Larrea Tridentata (DC.) Coville in Desert Washes of an Arid Environment

Trace elements (As, Cd, Cr, Pb, Ba, Fe, Al, Mn and Ba) were uptaken by the leaves of the creosote bush (Larrea tridentata (DC.) Coville) in Nelson, Nevada, although at low concentrations. Samples were collected up-gradient of the mine tailings, the tailings, and down gradient from the source to measure spatial distribution. Data show that trace elements (As, Ba, Cr, Hg, Se) enter L. tridentata through root tissues, migrating to leaf tissue, but at significantly lower levels than that of the source sediments. Metalloid (As and Se) concentrations in the leaf tissues ranged from non-detect to greater than 44 mg kg−1 As and non-detect to over 34 mg kg−1 Se. For trace metals, Hg ranged from non-detect to 0.14 mg kg−1; Ba from 1.74 to 4.12 mg kg−1; and Cr from non-detect to 6.18 mg kg−1 while Ag, Cd, and Pb were not detected in the plant leaves. When comparing the ratio of sediment metal concentration to plant metal concentrations, the Techatticup Wash contained the highest levels of trace elements in the leaves of the L. tridentata, followed by the Carnation Wash, with the Eagle Wash containing the lowest concentrations of trace elements. View Full-Text
Keywords: tailings; Nevada; trace elements; metals; plant uptake; arid; creosote tailings; Nevada; trace elements; metals; plant uptake; arid; creosote
►▼ Show Figures 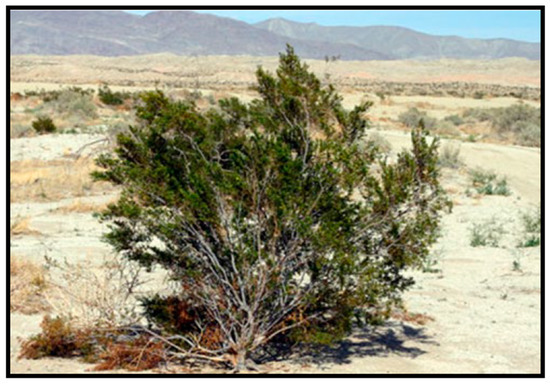