A New Method of Environmental Assessment and Monitoring of Cu, Zn, As, and Pb Pollution in Surface Soil Using Terricolous Fruticose Lichens

Levels of trace element pollution in surface soil can be estimated using soil analyses and leaching tests. These methods may reveal different results due to the effect of soil properties, such as grain size and mineral composition, on elemental availability. Therefore, this study advocates an alternative method for monitoring and assessment of trace element pollution in surface soil using terricolous fruticose lichens. Lichens growing at abandoned mine sites and unpolluted areas in southwest Japan and their substrata were analyzed using inductively coupled plasma-mass spectrometry and X-ray fluorescence spectrometry to clarify the relationships between Cu, Zn, As, and Pb concentrations in lichens and soils, including their absorption properties. Concentrations of these elements in the lichens were positively correlated with those in the soils regardless of lichen species, location, habitat, or conditions of soils. The analyzed lichens had neither competitive nor antagonistic properties in their elemental absorption, which made them good biomonitors of trace element pollution in surface soil. The distribution maps of average Cu, Zn, As, and Pb concentrations at each sampling region detected almost all of the Cu, Zn, and As pollution of the soils. Therefore, lichens could be used in practical applications to monitor Cu, Zn, and As pollution in surface soils. View Full-Text
Keywords: biomonitor; environmental assessment; elemental competition; bioconcentration factor biomonitor; environmental assessment; elemental competition; bioconcentration factor
►▼ Show Figures 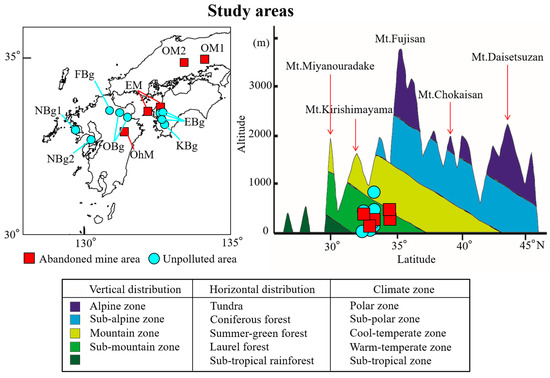