Latino Veterans with PTSD: A Systematic Review
Next Article in Special Issue

Working memory is a central component of general cognition; however, the exact definition of working memory can vary based on the theoretical model followed. In an attempt to summarize commonalities among different models of working memory, Miyake and Shah [32] analyzed ten well-known models and determined that common to most models is the maintenance and processing of mental representations. Although terminology and exact representations vary among models (e.g., visual, auditory, speech, lexical, semantic, motor, mood, context, and/or tactile representations are described), most models recognize that working memory involves some form of temporary storage, as well as processing or manipulation of information [33,34,35,36,37,38].
It follows that working memory training aims to enhance an individual’s ability to temporarily store and process information. Both auditory and visual working memory are important for interpersonal day-to-day functioning of individuals with schizophrenia, including in social, occupational, educational, and community settings [15]. For example, well-functioning auditory working memory processes likely allow an individual to follow and respond to conversations and instructions, while visually working memory may be important for finding a job site or navigating an office environment, and manually manipulating objects to perform a task [15,39,40]. Given the known cognitive deficits in schizophrenia, and the potential implications of poor working memory in schizophrenia, it is surprising that more research has not focused specifically on working memory enhancement, whether specific to auditory or visual representations, or other representations (e.g., speech, motor, tactile, mood).
Although numerous working memory-training programs are available either in commercial (e.g., Lumosity, Nintendo BrainTrain, Jungle Memory, CogniFit) or clinical (e.g., Cogmed) settings, these programs are composed of a variety of training tasks targeting a number of cognitive domains. Hence, similar to cognitive remediation programs currently utilized and investigated in schizophrenia (see [16]), these programs do not target working memory processes specifically. Yet, targeted working memory training programs have demonstrated positive outcomes in enhancing various aspects of working memory, as well as attention and problem-solving, in a number of populations [41,42,43,44,45,46,47,48,49,50,51,52,53,54,55,56,57,58].
Dual n-back working memory training is a cognitively complex, adaptive, computerized training task that specifically targets working memory. The dual n-back training task, showing in Figure 1, requires trainees to simultaneously maintain and manipulate (i.e., update) auditory and visual stimuli at increasing levels of difficulty. Specifically, trainees remember the position of an image on a grid, and an auditory stimulus such as a letter, word, or number. The trainee then responds based on whether the visual or auditory stimulus matches that presented n-back. The task can be accessed online as part of broader cognitive training programs (e.g., “Memory Lane” games available through subscription to www.lumosity.com [59]), or at no cost to users (e.g., [60]), thus, is an easily accessed and low cost alternative to more costly training programs. 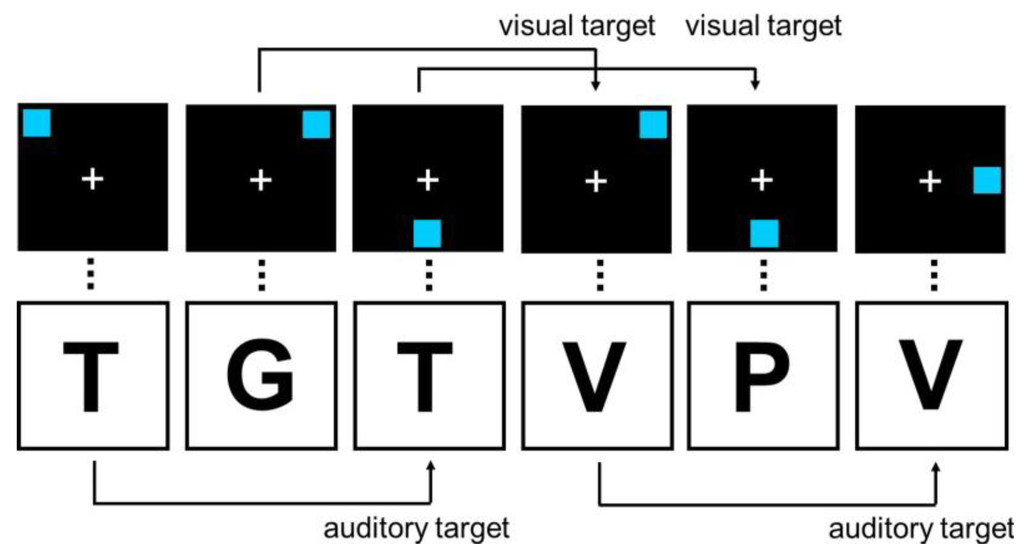 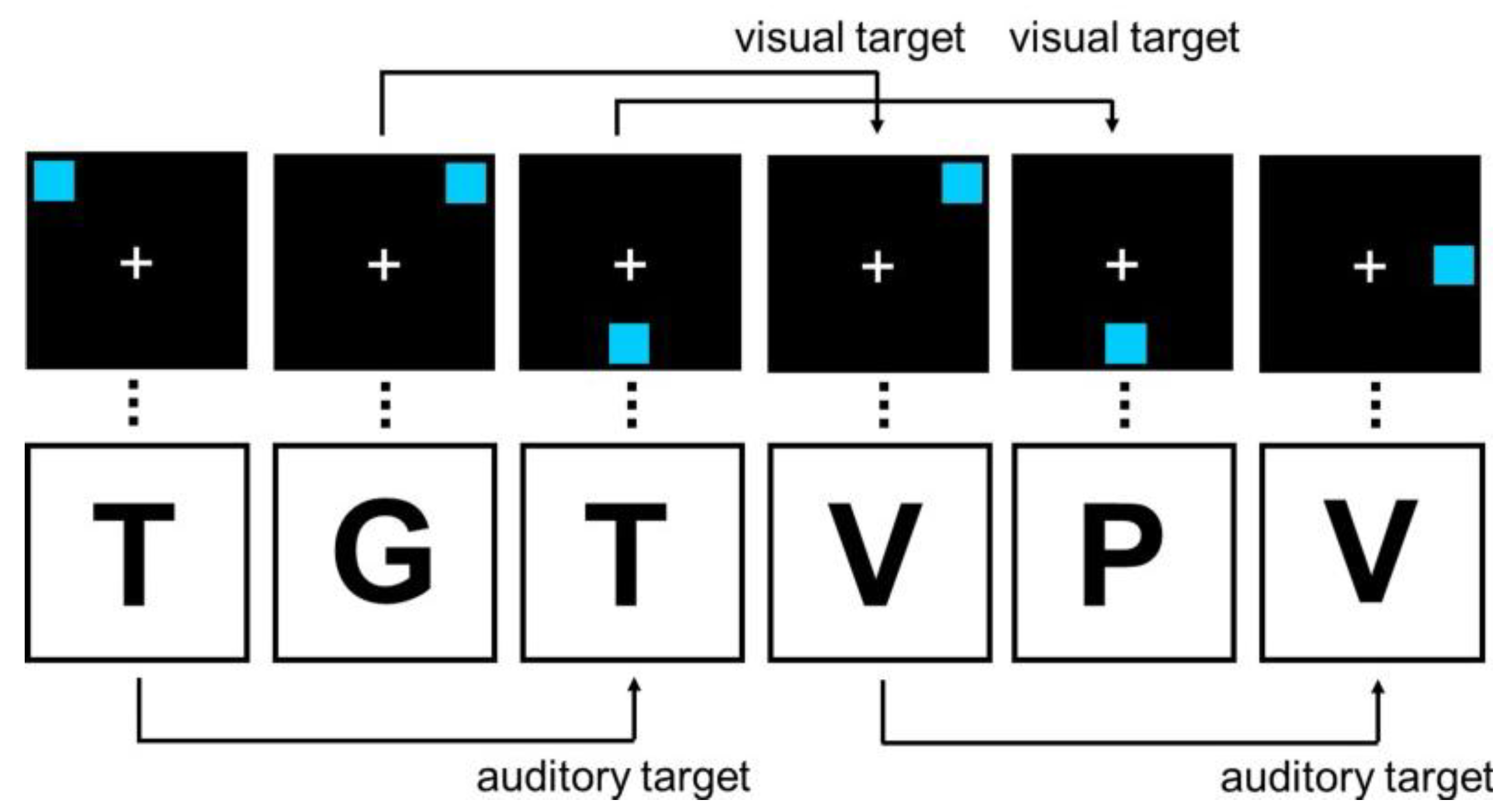 In schizophrenia patients, there are currently no dual n-back training studies. However, during n-back task performance, schizophrenia populations demonstrate changes in neural activity in a number of areas relative to healthy controls, suggesting these regions could be positively affected by working memory training. Specifically, hypoactivation is documented in the bilateral dorsolateral prefrontal cortex, rostral prefrontal cortex, and right ventrolateral/insular cortex, and hyperactivation in the right dorsomedial prefrontal cortex, left frontal pole, and the anterior cingulate [80].
Despite a paucity of studies, developing evidence suggests that working memory training has beneficial neural impacts for schizophrenia patients. Relative to controls, schizophrenia patients who trained with audio and visual processing exercises demonstrated increased medial prefrontal cortex activity after 80 h of training, with such activity associated with sustained improvements in psychosocial functioning [81,82] and working memory performance [82]. However, this training program included facial emotion recognition and theory of mind exercises; thus, it is difficult to determine which form of training was associated with neural benefit. Similarly, patients who utilized 6–8 weeks (17 h) of attention and working memory drill-and-practice training performed better on cognitive measures after training relative to healthy and placebo-trained patient controls, and displayed increased activity in neural networks associated with attention and working memory, specifically, the dorsolateral prefrontal cortex, anterior cingulate, and frontopolar cortex [83]. Although n-back training was included in the training protocols, the benefits of n-back training specifically were not isolated. Hence, while these studies suggest benefit to the neural networks of schizophrenia patients after working memory training, training programs remain broad, making it difficult to clearly determine what aspect of training is providing benefit. Furthermore, these studies were generally preliminary, thus, additional investigations with larger samples will better address the potential efficacy and effectiveness of working memory training on networks associated with attention and working memory in schizophrenia.
Wexler and colleagues [84] trained auditory working memory in schizophrenia patients using a verbal serial position memory task where a list of words was presented, then after a delay one of the words was provided and the trainee indicated in what position that word was in the list. As the participant achieved competence at the task (i.e., 90% accuracy after three consecutive training days) the list length increased, thereby increasing difficulty of the task. Relative to before training, three participants improved on measures of verbal working memory after 10 weeks of training (20–30 h), with improvements corresponding to increased activation in the left inferior frontal cortex [84]. However, five participants failed to demonstrate notable improvement; the authors did not speculate as to why some patients benefited while others did not.
Although preliminary, the findings related to the behavioral and neural benefits of working memory training to verbal working memory are noteworthy given the importance of verbal working memory to social and work-related interpersonal interactions. For example, abilities such as remembering a newly introduced person’s name while having a conversation with that person, following multi-part instructions (e.g., “please page Dr. Smith then tell Sally to call Dr. Marks”), or responding to a two-part question (e.g., “where did you get the pipes from, how much were they, and what type of putty did you use to fix the leak?”) rely on auditory working memory processes. In an educational or employment setting, verbal working memory would be used while taking notes, or mentally forming and preparing to ask a question while still listening to the content of a presentation. Hence, enhanced verbal working memory can have notable implications on day-to-day functioning for individuals with schizophrenia navigating the complexities of social and occupational life. Using this knowledge, we suggest that investigators interested in better understanding the potential benefits of cognitive remediation in schizophrenia focus on working memory training as an important target for improvement.

This work was supported by an Alberta Innovates-Health Solutions studentship to LLS and a Canadian Institutes Health Research New Investigator Award and Natural Sciences and Engineering Research Council grant to VMG.