Psychiatric Disorders and Substance Use in Homeless Youth: A Preliminary Comparison of San Francisco and Chicago
Previous Article in Journal

Geological substrates and air pollution affect the availability of calcium to mammals in many habitats, including the Adirondack Mountain Region (Adirondacks) of the United States. Mammalian insectivores, such as shrews, may be particularly restricted in environments with low calcium. We examined the consequences of calcium restriction on the least shrew (Cryptotis parva) in the laboratory. We maintained one group of shrews (5 F, 5 M) on a mealworm diet with a calcium concentration comparable to beetle larvae collected in the Adirondacks (1.1 ± 0.3 mg/g) and another group (5 F, 3 M) on a mealworm diet with a calcium concentration almost 20 times higher (19.5 ± 5.1 mg/g). Animals were given no access to mineral sources of calcium, such as snail shell or bone. We measured running speed and performance in a complex maze over 10 weeks. Shrews on the high-calcium diet made fewer errors in the maze than shrews on the low-calcium diet (F1,14 = 12.8, p < 0.01). Females made fewer errors than males (F1,14 = 10.6, p < 0.01). Running speeds did not markedly vary between diet groups or sexes, though there was a trend toward faster running by shrews on the high calcium diet (p = 0.087). Shrews in calcium-poor habitats with low availability of mineral sources of calcium may have greater difficulty with cognitive tasks such as navigation and recovery of food hoards.
Keywords: Cryptotis parva; calcium; running speed; spatial memory; acid deposition Cryptotis parva; calcium; running speed; spatial memory; acid deposition

Chronic acidic deposition, which results from air pollution, increases environmental exposure to toxins and depletes important nutrient cations, including calcium [1,2]. Habitats affected by acidic deposition often have low or reduced abundance of high-calcium invertebrate animals, including snails [3,4,5,6]. Snail shells are an important source of calcium for passerines and reduced snail density may result in increased eggshell deformities and population declines [4,7]. Tree swallows (Tachycineta bicolor) experience reduced fitness and altered foraging behavior in areas with low calcium, resulting in longer search times and greater predation risk [8].
Calcium content of invertebrates in forests with calcium-rich soils is greater than invertebrates found associated with calcium-poor soils [9]. Perhaps to compensate for lower calcium availability in invertebrates, passerine birds consume more oak (Quercus spp.) buds in areas with low soil calcium. In poorer soils, calcium levels were higher in oak buds as compared to all other invertebrate taxonomic groups, except for spiders [7]. The need to supplement diets with hardwood buds, in areas depleted of calcium, might interestingly exacerbate losses attributed to white-tailed deer (Odocoileus virginianus) browsing in northern forests [10,11].
The physiological calcium requirement of birds generally is 10 - 15 times that of mammals [12], underpinning the vast amount of research on avian diet and physiology in habitats with low calcium availability. The use of supplemental calcium by mammals is less well understood. However, a deficiency of dietary calcium may limit reproduction and development among insectivorous bats in nature [13,14,15]. Indeed, periodic deficiencies in dietary calcium generally may exist for mammals that rely on invertebrate foods [14]. Non-volant insectivores, such as shrews, may be more vulnerable to local calcium deficiency than birds and bats of similar size because they are more closely tied to their local habitats. Northern short-tailed shrews (Blarina brevicauda) apparently use snails heavily in some regions [16].
Decreased dietary calcium availability has been shown to retard growth [17] and decrease motor performance [18] in laboratory rodents. Female round-eared elephant shrews (Macroscelides proboscideus) supplemented with dietary calcium displayed higher density of bone calcium and enhanced reproduction [19]. Limited calcium intake was associated with reduced fecundity in the California vole (Microtus californicus) in nature, and females of this species preferentially ate high-calcium foods during the reproductive season [20].
Calcium-deficient diets may impair the cognitive abilities of mammals, potentially reducing their capacity to learn, forage, acquire mates, avoid predators, and navigate efficiently [21,22,23]. Recognition of environmental landmarks, which is dependent upon spatial memory, can have important consequences for survival and reproduction [24]. The retrieval of food hoards depends upon accurate spatial memory. Calcium deficiency has been observed to severely limit the cognition of female Norway (Wistar) rats (Rattus norvegicus) [23]; and calcium-dependent protein kinases (PRKCs) are significant predictors of spatial memory and behavior [21,25]. When Norway (Sprague-Dawley) rats were exposed to radiation that impaired bodily PRKC function, memory formation was adversely affected [25].
Our aim was to better understand the implications of calcium depletion on shrews. The least shrew (Cryptotis parva) inhabits the forest-floor and consumes invertebrate prey. It is one of the most widespread shrew species in North America [26] and a well-developed laboratory model [27]. More recently shrews have been used as models of bioaccumulation to test environmental changes in terrestrial systems, likely due to their high metabolic rates and constant foraging behavior [28,29].
Cryptotis parva has a high metabolic rate, making them likely responsive candidates to environmental change [30]. We studied the physical and cognitive performance of least shrews maintained on diets that differed in calcium availability. Because the least shrew is known to hoard food [31], spatial memory might be particularly important in meeting the high energetic requirements of this species in an environmentally sensitive area.

Our shrews were descendants of a least shrew colony originating from Boone County, Missouri in 1966 [32]. Shrews were marked with passive integrated transponder tags (Biomark, Inc., Boise, Idaho) for unique identification. Least shrews were maintained on a 12:12 L:D cycle and bred throughout the year. Animals were maintained in the Colgate University vivarium on a mixture of laboratory insectivore diet (Lab Diet Advanced Protocol® Insectivore Diet; crude protein ≥ 28.0%, Ca 1.4%), commercial cat food, and spring water. All procedures followed approved Colgate University Institutional Animal Care and Use protocols.
Twenty shrews were randomly selected from our colony using random number generation and assigned to two dietary calcium groups: a high-calcium group and a low-calcium group. Random selection was continued until there were 5 females and 5 males in each group. Two males from the high-calcium group died early in the experiment due to unknown causes, necropsies were performed and no abnormalities were noted. As a result, data related to these animals were disregarded. All animals were maintained on the same diet, as described above, for two weeks prior to trial implementation and were fed ad libitum [31].
Experimental diets were prepared by raising mealworms (Grubco, Inc., Fairfield, Ohio) on chick starter. Mealworms for the low-calcium diet were raised on chick-starter alone; mealworms for the high-calcium diet were raised on chick starter with 8% (by mass) reagent grade CaCO3 [33]. Mealworms were raised on these media, along with apple slices for moisture, for >48 h prior to homogenization and storage at −8 °C until use. Calcium concentrations of both diets were analyzed elementally using inductively coupled plasma-atomic emission spectroscopy following wet digestion.
The high-calcium mealworm diet had a calcium concentration that was almost 20 times that of the low-calcium diet (Table 1). The level of calcium in the low-calcium diet (1.10 ± 0.34 mg/g) was comparable to the calcium concentration in a large assortment of adult beetles from Michigan (1.05 ± 0.05 mg/g [34]) and similar to the level of calcium in assorted beetle larvae collected from a site in Herkimer County, New York (3.39 ± 0.87 mg/g, n = 7, unpublished data). The low-calcium diet also was slightly lower than the calcium concentration in our maintenance diet. Shrews were deprived of food for 5 h prior to all trials to increase the motivating effect of a food reward [35]. Mass (g) of shrews at the start and end of the experimental period were recorded.

Table 1. Average (± SE) calcium concentration in shrew diets as compared to the base diet. Averages are based on three independent preparations of food made during the experiment.

Our running trials and complex-maze assay followed that of Punzo and Chavez [35]. Running speed was measured on a 4 m circular, closed plywood track (Figure 1A). Shrews were placed inside the track using a conical plastic tube for transfer. A 25-mL plastic culture dish, partially filled with mealworms, was placed in front of the plastic tube for reinforcement. When the shrew entered the track, the plastic tube was withdrawn and the animal was coaxed around the track by gentle prodding (no physical contact) with a padded wooden dowel to prohibit exploration [35]. Stopwatches recorded the time necessary to complete one lap of the 4 m track. After completing one lap around the track, shrews were allowed to consume mealworms before being returned to the plastic tube for relocation to the holding cage. The track was disinfected with unscented soap and water between trials to reduce olfactory cues.

Each shrew completed a set of 5 trials, with 5 min of rest between trials, on each of 2 days every 2 weeks. Thus, each shrew completed 10 trials every 2 weeks, for a total of 60 trials over the 10 weeks study (Week 0, Week 2, Week 4, Week 6, Week 8, and Week 10). Shrews were tested in random order, with a new random order determined each testing period. Data were averaged across the 10 trials within a testing period for each animal to provide a single replicate observation for each animal every 2 weeks.
A complex maze (Figure 1B) was constructed following the published diagram in Punzo and Chavez [35], which was used successfully by these authors to assess spatial learning in C. parva of different ages. The maze was 45 cm × 60 cm with channels constructed from white acrylic and a clear acrylic top. The maze contained five 5 cm blind alleys and start and goal boxes with removable sliding acrylic gates. The goal box contained a dish filled with mealworms as a reward. Shrews were placed in the starting box for roughly 5 min to allow habituation.
The number of errors was recorded during each trial. An error was recorded when the entire body of the shrew, minus the tail, entered a blind alley [35]. The trial ended when the shrew reached the goal box. Each shrew was subjected to 10 trials every two weeks during the 10 weeks study for a total of 60 trials. Trials were considered subsamples within each 2 weeks period. Shrews were tested in random order as indicated above for running trials. The track was disinfected with unscented soap and water between animal trials to reduce olfactory cues.

Two-way repeated-measures analysis-of-variance, a test robust to unbalanced design, was used to evaluate the influence of dietary calcium, sex, and diet × sex interaction on each of running speed and maze-error rate. Analyses were performed using SPSS® (version 14.0 for Windows). Residuals were examined for normality after models were fit to the data. The Greenhouse-Geisser correction to degrees of freedom was used for factors in the model involving time [36]. GPower [37] was used to test for effect size on sex and diet treatments. 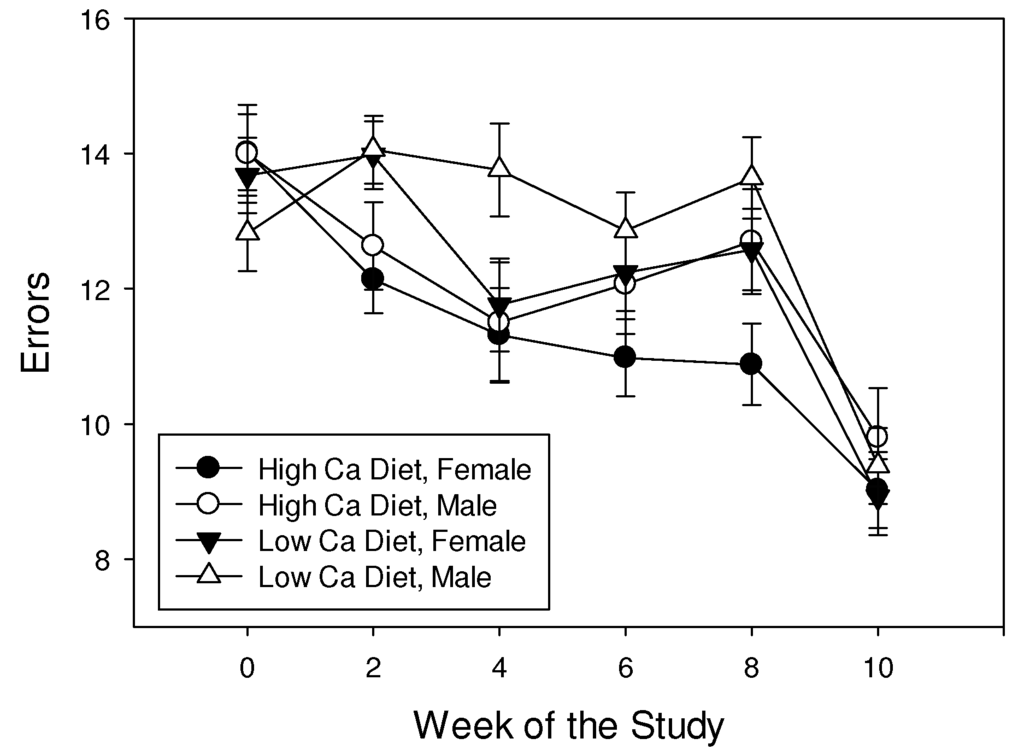 When placed on a diet with restricted calcium, which simulated conditions in areas of acid deposition, Cryptotis parva were less successful in maze trials than animals maintained on a diet with more calcium. Mammals inhabiting areas with low and declining calcium availability, due to acidic deposition, may experience poor spatial memory and learning. These sublethal effects, which may not be obvious in short-term animal surveys, may nevertheless have negative consequences on reproduction and survival. Our study lends support to the usefulness of shrews as model organisms in behavioral studies. Shrews differ from rodents behaviorally, physiologically, and ecologically. Their high metabolic rate and short generation time may make them particularly useful model vertebrates in studies of environmental change.