Efficacy of Pancreatic Endotherapy In Pancreatic Ascites And Pleural Effusion

Exacerbations in COPD Patients with Bronchiectasis

Bronchiectasis (BE) is characterized by irreversible widening of the medium-sized airways, along with inflammation, chronic bacterial infection, and destruction of the bronchial walls. BE represents a final common pathway for a large number of disorders, such as development of BE following severe pneumonia, infection with Mycobacterium tuberculosis, or with non-tuberculous mycobacteria (NTM), and allergic bronchopulmonary aspergillosis (ABPA). BE may be associated with connective tissue diseases (e.g., rheumatoid arthritis), inflammatory bowel disease (IBD), or with inhaled foreign bodies, lung tumors, and other obstructive lesions. In addition, there are a number of congenital or inherited causes of BE, most of which are rare. A large percentage of all BE cases (20%–60%) have unknown causes, and are considered to be idiopathic [1].
With the widespread availability of high-resolution computed tomography (HRCT), many patients with BE have been detected. It has been estimated that at the beginning of this century, there have been at least 110,000 adults in the USA with BE [2]. However, the current incidence and prevalence of BE is still not clear, and existing evidence indicates a huge variability in BE prevalence, depending on the geographic area considered. In countries as Korea, which has a high tuberculosis incidence rate, the prevalence of BE in the general population is high, i.e., in a study on 1409 Korean adults, Kwak et al. [3] diagnosed BE in 9.1% of the study subjects based on findings from chest computed tomography (CT) scans. In addition, Weycker et al. [2] estimated the prevalence of BE to be 52.3 cases per 100,000 adults in the US from a study with a retrospective cohort design which included more than 56 million patients from multiple US health plans. More recently, Quint et al. [4,5] reported an increase in point prevalence of BE in the UK in women, from 350.5 cases per 100,000 in 2004 to 566.1 per 100,000 in 2013, and in men from 301.2 cases per 100,000 in 2004 to 485.5 per 100,000 in 2013.
Similar to the clear overlap between chronic obstructive pulmonary disease (COPD) and asthma, termed the asthma-COPD overlap syndrome (ACOS), there is also a clear overlap between BE and COPD [5,6]. According to some findings, up to 50% of patients with moderate to severe COPD had coexisting BE [7,8]. Furthermore, in a population-based study performed in the UK, Quint et al. found that 42.5% of patients with BE had a coexisting diagnosis of asthma, and 36.1% had a coexisting diagnosis of COPD [4,5].
COPD and BE share many pathophysiological and clinical characteristics. In addition, findings of BE from HRCT scans in patients with COPD indicates the presence of more advanced airway dysfunction, bacterial colonization and frequent exacerbation [9,10]. In the 2014 Global Initiative for Chronic Obstructive Lung Disease (GOLD) guidelines, BE was for the first time defined as a comorbidity of COPD, and this change was retained in the 2015 update [11,12].
The aim of the present study was to evaluate the frequency and duration of bacterial exacerbations, as well as the duration of the exacerbation-free interval in COPD patients with coexisting BE.

The study was designed as a comparison of frequency and duration of bacterial exacerbations, as well as comparing the duration of exacerbation-free intervals between a group of COPD patients with BE and a group of COPD patients who were confirmed negative for BE. The study was performed from December 2015 to December 2016 by the Institute for Occupational Health, R. Macedonia, Skopje (a referral institution with five pulmologists working with outpatients, approximately 6000 respiratory patients per year).

The study population included 27 patients with COPD group D (15 males and 12 females, aged 43 to 61 years) with BE diagnosed by HRCT, and an equal number of Group D COPD patients with similar demographic characteristics (16 males and 11 females, aged 44 to 62 years), who were confirmed negative for BE through HRCT. We opted to investigate COPD patients from Group D as the existing evidence indicates that a greater severity of functional impairment in COPD patients is accompanied by a higher prevalence of BE [5,7,10].
Patients with a history of asthma, lung cancer, or other significant respiratory disease, as well as those unable to complete diary cards, were excluded from the study. All study subjects were recruited in the stable phase of the disease, i.e., without any evidence of exacerbation for at least three weeks.
Daily stable respiratory symptoms (baseline symptoms), medication use, and history of exacerbations, were noted in all subjects before they commenced the study. All study subjects underwent baseline and post-bronchodilator spirometry, according to the official recommendations of the European Respiratory Society (ERS) and the American Thoracic Society (ATS) [12,13]. In addition, in all study subjects a microbiological evaluation of sputum was performed, according to official recommendations [14].
The Body Mass Index (BMI), a measure of body fat based on adult height and weight, was determined in all study subjects by computed calculation using a BMI calculator [15].
Classification of smoking status was conducted according to World Health Organization (WHO) recommendations [16]. Passive smoking or exposure to environmental tobacco smoke (ETS) was defined as an exposure to tobacco combustion products from smoking by others (at home, workplace, etc.), i.e., a presence of at least one smoker in the household and/or in the workplace [17,18].

According to the official GOLD recommendations, COPD was considered by identifying a post-bronchodilator ratio between forced expiratory volume in one second, and a forced vital capacity (FEV1/FVC ratio) less than 0.70, in symptomatic subjects (with dyspnea, chronic cough, or sputum production) with a history of exposure to risk factors for the diseases (noxious particles and gases).
Subjects with diagnosed COPD were classified according to the combined COPD assessment which included the assessment of symptoms, degree of airflow limitation, and risk of exacerbations. COPD patients classified as a Group D were characterized by frequent symptoms (overall score of the COPD Assessment Test (CAT) equal or higher than 10), severe or very severe airflow limitation (FEV1 value ranging from 30% to 50% of its predicted value, or less than 30% of its predicted value) and high risk of exacerbation (two or more exacerbations per year, or one or more exacerbations requiring hospitalization per year).
During the study period, all study subjects were given regular treatment for stable disease status in accordance with official GOLD recommendations [11,12].

According to the actual GOLD recommendations, COPD exacerbations were considered as acute events characterized by a worsening of the patient’s respiratory symptoms that was beyond normal day-to-day variations, and led to a change in medication. As the most common causes of exacerbations are viral and bacterial respiratory infections, and because there is currently no biomarker allowing precise etiologic diagnosis, the diagnosis of exacerbation was defined by the patient’s symptoms, using the criteria described by Anthonisen et al. [24]. Probable bacterial aetiology was established when the exacerbation was Anthonisen Type I (presence of three cardinal symptoms: increased dyspnea, sputum volume, and purulence), or Type II (presence of two cardinal symptoms), if increased purulence of sputum was one of the two symptoms.
The treatment of exacerbations with antibiotics was commenced empirically, following the official GOLD recommendations. In cases with a positive result from microbiological evaluation of sputum, the treatment was continued following the identification of bacterial sensitivity to certain antibiotics. Oral corticosteroids were given as needed (a dose of 40 mg oral prednisone per day for five days). The course of exacerbation was evaluated as a function of resolution of symptoms, and the treatment was considered to be successful if cure or clinical improvement was achieved. 'Cure' was defined as complete resolution of the cardinal symptoms, whereas 'clinical improvement' was defined as a return of symptoms to their baseline severity [11,12,24].

Similar to the study on BE and exacerbation indices carried out by Patel et al. [7], all study subjects maintained daily diary cards where they noted any appearance of increase in the intensity of major symptoms (dyspnea, sputum amount, and sputum purulence) or minor symptoms (nasal discharge/congestion, sore throat, wheezing, cough, etc.) over their chronic (stable) symptoms. A member of the study team met with study subjects within 48 hours of the detection of deterioration in symptoms, and diagnosis was confirmed for each case. Exacerbation and its resolution were defined as mentioned above. Exacerbation number, their duration, and the duration of exacerbation-free intervals (i.e., a period of time between two exacerbations) were calculated for each of the study subjects, based on data from diary cards for a 12-month period of follow-up.

Statistical analysis was performed using the Statistical Package for the Social Sciences (SPSS) version 11.0 for Windows (SPSS Inc., Chicago, IL, USA). Continuous variables were expressed as mean values with standard deviation (SD), and the nominal variables as numbers and percentages. Analyses of the data included testing the differences in prevalence and comparison of the means by chi-square testing (or Fisher’s exact test where appropriate), and the t-test for independent-samples. A p-value less than 0.05 was considered to be statistically significant.

All authors hereby have declared that no competing interests exist. 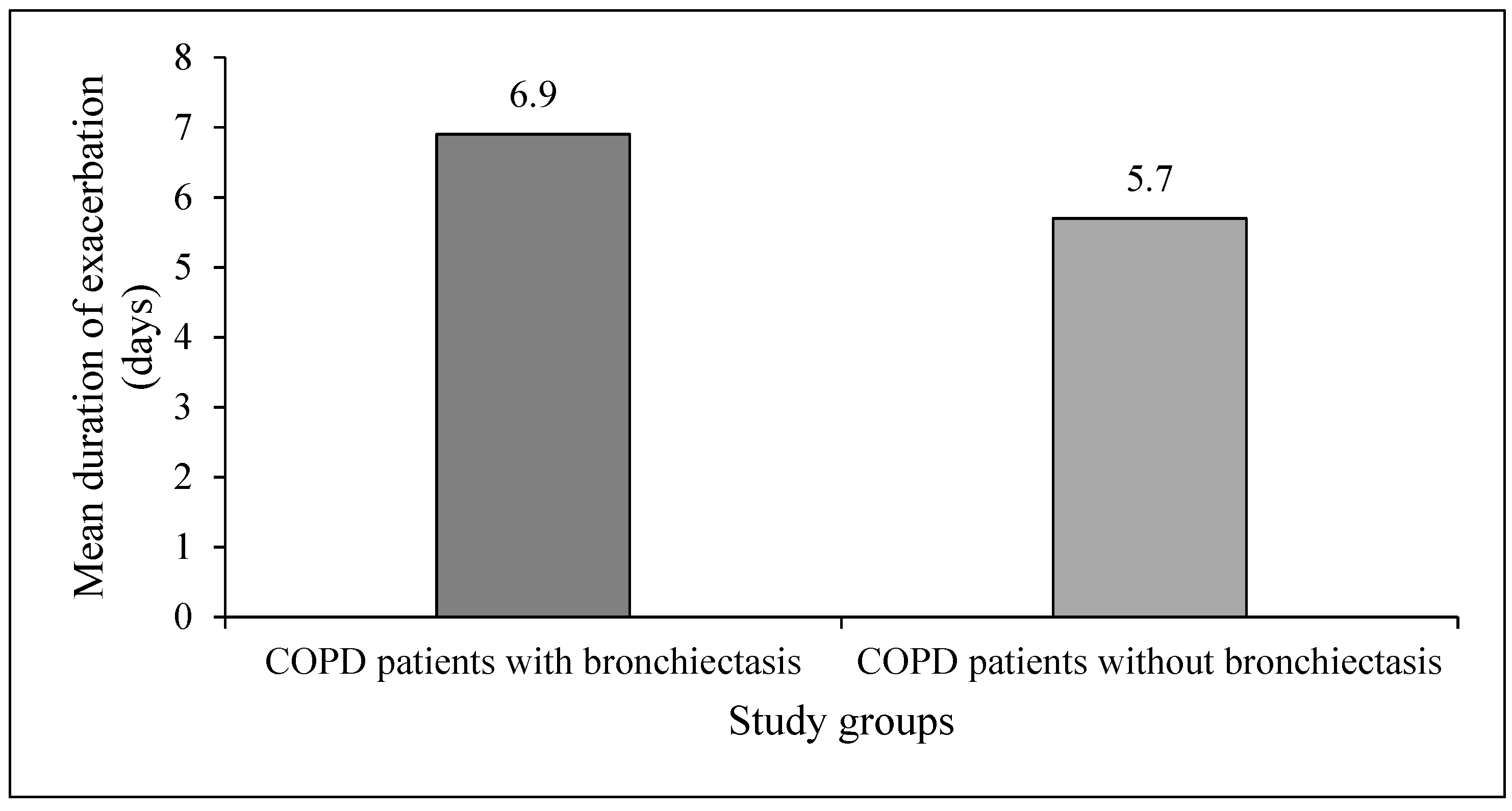 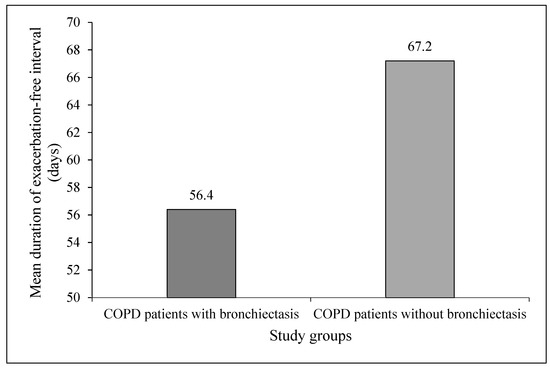 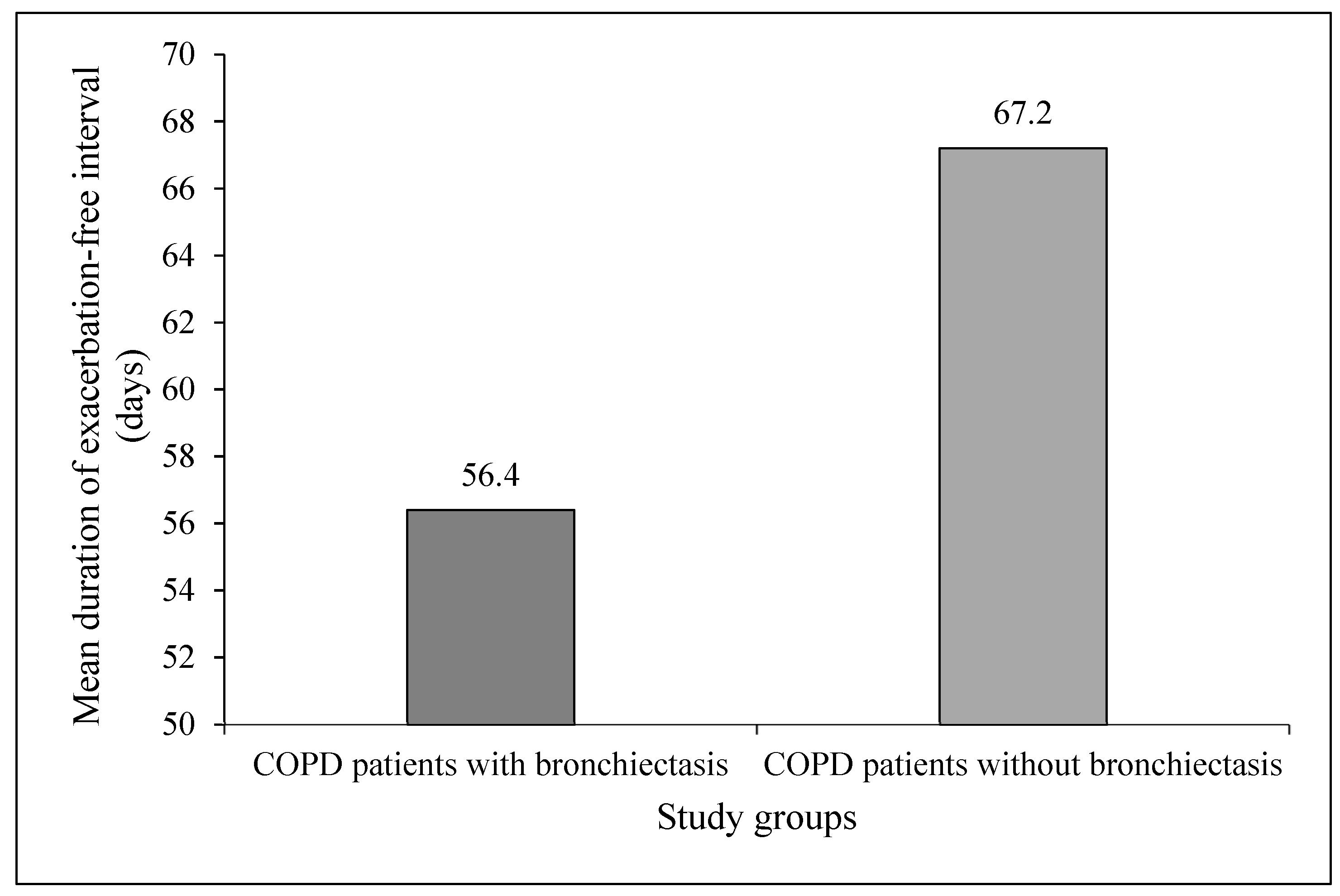 Table 1. Demographics of the study subjects.
Table 1. Demographics of the study subjects.
Numerical data are expressed as mean value with standard deviation; frequencies as number and percentage of study subjects with certain variable. * Tested by Chi-square test (or Fisher’s exact test where appropriate) and Independent-samples t-test. BE: bronchiectasis; COPD: chronic obstructive pulmonary disease; M: male; F: female; BMI: body mass index; kg: kilogram; m: meter; % pred.: % of the predicted value; FVC: forced vital capacity; FEV1: forced expiratory volume in one second; LA: long-acting; ICS: inhaled corticosteroid; ETS: environmental tobacco smoke.
© 2017 by the authors. Licensee MDPI, Basel, Switzerland. This article is an open access article distributed under the terms and conditions of the Creative Commons Attribution (CC BY) license (http://creativecommons.org/licenses/by/4.0/).
We use cookies on our website to ensure you get the best experience. Read more about our cookies here.
Accept
We have just recently launched a new version of our website. Help us to further improve by taking part in this short 5 minute survey here. here.
Never show this again