A Study on Variation in Channel Width and Braiding Intensity of the Brahmaputra River in Assam, India

The Brahmaputra River flows through Assam, India, for about 670 km along an alluvial valley as a wide braided river. The width of the river varies with time along its course. The braiding intensity of this river is estimated using the braiding index (BI) of Brice (1964), which also changes with space and time along the course of the river. Temporal changes of both width and BI have been studied using topographic maps of 1912–1928 and 1963–1975, and dry season satellite data of 1996, 2000, 2007 and 2009. The mean widths of the Brahmaputra River channel in Assam during 1912–1928, 1963–1975, 1996, 2000, 2007 and 2009 were 5949 m, 7455 m, 7505 m, 8008 m, 8308 m and 9012 m, respectively, confirming an overall increase in width with time. Both the width and variation of width are lowest in four short narrower segments of the river. Three of these segments represent hard points comprising gneissic rock, and one segment is on alluvium comprising cohesive clay. The increase in width is correlated to enormous sediment load produced by the great Assam earthquake of 1950 and large-scale deforestation in the Himalayas. The mean BIs for the Brahmaputra for 1963–1975, 1996, 2000, 2007 and 2009 were 8.59, 8.43, 6.67, 6.58 and 7.70, respectively, indicating in general a decreasing trend up to 2007. The BI showed low variation at the four narrow segments where there is also a minimum variation of the channel width. The BI has increased significantly in the upstream part of the river. Very high fluctuation of discharge (17,000 in 24 h) and high sediment loads of the Brahmaputra (daily mean sediment discharge of 2.0 million tonnes during monsoon), erodible alluvial banks and high width/depth ratios are the main causes of development of braiding. The interrelationship between channel width and BI of the Brahmaputra shows a positive correlation, indicating an increase in BI with increasing channel width. View Full-Text
Keywords: Brahmaputra; channel width; braiding Brahmaputra; channel width; braiding
►▼ Show Figures 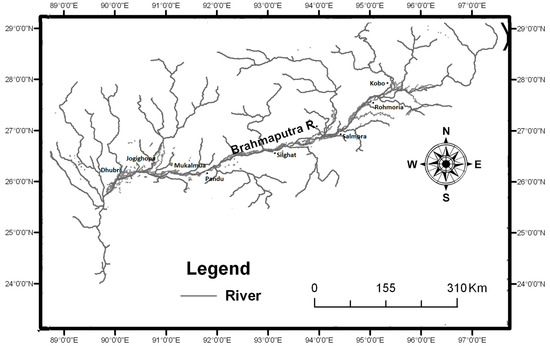