Interpretation of the Factors Defining Groundwater Quality of the Site Subjected to the Wildfire of 2007 in Ilia Prefecture, South-Western Greece

Geochemistry and Structure of Krakatoa Volcano in the Sunda Strait, Indonesia

The violent eruption of Krakatoa Volcano located in the Sunda Strait, Indonesia, in 1883 represents one of the deadliest eruptions in human civilization. Although lots of data have been reported, the trajectory of the subducted slab and the upper mantle structure beneath this volcano are still rather poorly known. We combined geochemical data, major, trace and rare earth elements with seismic tomograms to characterize the deep structure of Krakatoa Volcano at the junction of Sumatra and Java subduction systems. Geochemical data are in agreement with the partial melting of mantle wedge in these subduction systems, based on previous studies, and this conclusion is also supported by inferences from P-wave tomographic model. Whereas, the tomographic image of S-wave suggests that subducted slab has been intruded by hot material of mantle upwelling. The presence of both partial melting of mantle wedge and mantle upwelling in the upper mantle might be caused by the thinning of subducted slab beneath Krakatoa Volcano.
Keywords: geochemistry; seismic tomogram; Krakatoa Volcano; Indonesia geochemistry; seismic tomogram; Krakatoa Volcano; Indonesia

The nature of magma’s genesis in subduction zone settings can be determined by whole rock geochemistry and isotopic compositions, even though whole-rock geochemistry and isotopic compositions are not always indicative of actual magma source characteristics, as they have commonly undergone through complicated differentiation processes such as fractional crystallization, magma mixing and also crustal assimilation. Furthermore, the geochemical variations of the mantle wedge, subducted oceanic crust, subducted sediments or melts and slab configuration also play an important role in magma genesis [1,2,3,4,5].
Previous geological studies on Javan volcanoes including Krakatoa Volcano have mainly focused on magma genesis [6,7,8,9,10]. These studies suggest that magma beneath Krakatoa was originally derived from partial melting of the mantle wedge in the subduction system, with minor contamination from upper crustal and Java sediment melts.
Here, we focus on whole-rock geochemistry and Sr isotopic data from 1883, 1981 and 2002 eruption products and combine them with seismic tomograms to determine magma source characteristics. We note that regional seismic tomographic studies of the mantle structure include the deep subduction beneath Krakatoa Volcano [11,12,13,14].
This study will therefore explore the detailed slab structure, in particular, in the upper mantle beneath Krakatoa. Along with the whole-rock geochemistry and Sr isotopic data, we present P- and S-wave seismic images produced by means of improved tomographic imaging model technique [11] in order to propose a new magma genesis model beneath the volcano.

Indonesia is situated at the boundaries of three major plates on the southern margin of the Eurasian Plate, those are: the Eurasian, Indo-Australian and Pacific-Philippine Plates [15] (Figure 1). The Indo-Australian Plate moves northward, and is being subducted beneath the Eurasian Plate. The age of the subducted plate varies laterally. It is relatively young beneath Sumatra, i.e., around 40 Ma, where the subduction is highly oblique. In contrast, below Krakatoa, the age of the subducted plate is around 80 Ma, and it becomes significantly older, reaching up to 130 Ma in Eastern Java [16,17], where the convergence direction is almost perpendicular. The lateral variation of nature and age of the subducted plate influences the style of deformation and subducted angle along Sumatra to Java [18], which may produce a thinning in the subducted slab between Sumatra and Java [11], as mirrored by the abrupt change in the seismicity in the Sunda Strait [11]. The convergence rate increases from Sumatra to the East [19], i.e., about 6.7 to 7 cm/year [20,21]. The subduction zone is well defined by the volcanic arc, which stretches about 6000 km from Sumatra to the Molucca Sea, and by deep seismicity that extends down to a depth of 600 km [13,14,21,22,23].
Krakatoa is an active volcano located at the junction of Sumatra and the Java Islands. This volcano marks the changing of the subduction system from oblique along Sumatra to perpendicular along Java (Figure 1). The Krakatoa Volcanic complex is situated approximately 141 km from the Java Trench in the southwest of the volcano, whereas the Benioff zone is at a depth of approximately 120 km beneath the volcano [12,14].

The Krakatoa volcanic complex consists of Rakata, Sertung, Panjang and Anak Krakatoa Islands (Figure 2). The first three islands are remnants of the caldera collapse of the supposedly ancient Krakatoa, and Rakata Island itself is a volcano that grew up together with Danan and Parbuwatan volcanoes before the cataclysmic eruption of 1883.
Following [24], we divided the stratigraphy of Krakatoa into 4 eruption products (Figure 2), and a new detailed stratigraphy for Anak Krakatoa is shown in Figure 3, from old to young as follows:

In this study, we used representative whole-rock geochemical data (major, trace and rare earth elements, as well as the Sr isotope) from the 1883, 1981 and 2002 eruption products taken from [6,7]; see Table 1 and Figure 3 for stratigraphic position of the samples. The geochemical data analysis involved basaltic andesite (AK-1) and andesite (DR12653) from Anak Krakatoa, with the other one (L2835) being andesite from the 1883 catastrophic eruption. The samples were processed using XRF and INAA for major, trace and rare earth elements. The Sr isotope was measured dynamically on a single collector Finningan MAT 261.
We then combined our geochemical data interpretation results with P- and S-wave tomographic models to enrich our interpretation. We used travel-time residuals taken from an updated global data set by [25]. This data set covers the period 1964–1999 and includes nearly 100,000 global events recorded at a subset of about 7000 seismographic stations worldwide. We employed the same P- and S-ray data coverage to minimize bias or differences in the resulting models that may come from different ray paths. The tomographic models were derived using a non-linear approach, which was implemented through an iterative technique to update 3-D model by employing 3-D ray tracing [11]. As in [11], here we employed a cellular representation of mantle structure by discretizing the entire mantle by a uniform grid of constant velocity cells of 5° by 5°, but in the study area, we used a finer grid of 0.5° by 0.5°, allowing the resolution of relatively small-scale structures.

The SiO2 wt % contents for eruption products are 57.68% (1883 AD), 61.45% (1981 AD) and 55.71% (2002 AD), belonging to the medium- to high-K series. In addition, the eruption products are characterized by low TiO2 wt % contents (1.18% for 1883 AD, 1.02% for 1981 AD and 1.02% for 2002 AD). According to [26], volcanic rocks with TiO2 wt % contents <1.4% are typically magma related to the partial melting of the mantle wedge induced by the traditional fluids in the subduction system.
The 87Sr/86Sr isotope ratios of Krakatoa coverage in the narrow range are from 0.704393 (1883 AD) to 0.704428 (1981 AD). This range is quite low compared to Javan volcanic rocks, but it is relatively high compared to those of other volcanoes of the region of similar depth to the Benioff zone (e.g., Cikuray, Galunggung, Guntur) [8]. Therefore, the 87Sr/86Sr isotope ratios of Krakatoa are unlikely to reflect pure mantle, indicating a low degree of crustal assimilation [6].
Table 1 shows major, trace and rare earth elements, and Sr isotope from the 1883, 1981 and 2002 eruption products. These data were plotted in a La/Yb-Sc/Ni diagram, as proposed by [27], see Figure 4, and into a TiO2-MnO × 10-P2O5 × 10 diagram, as proposed by [28], see Figure 5. As shown in Figure 4 and Figure 5, these volcanic rocks are clearly arc magmas related to the partial melting of the mantle wedge in the subduction zone. The normalized diagram (spidergram) of the primitive mantle (Figure 6) shows that eruptive products of all samples are similar to Honshu medium-K basalt, showing highly incompatible elements (left-hand side), which are more enriched than moderately incompatible elements. Moreover, it is markedly depleted in some high field strength elements, notably niobium (Nb). These features are common to many supra subduction zone magmas in mature island arcs and convergent margins. They are believed to reflect intra-crustal magma fractionation superimposed on the signature of melting mantle wedge peridotite metasomatized by slab fluids [29] or residual titenate phase, most likely rutile in the slab during dehydration [30,31].
The P-wave tomographic model shows evidence of cold material, depicted by a high-velocity anomaly beneath Krakatoa Volcano (Figure 7a). Figure 7b shows the same cross-section, but through an S-wave tomographic model. These images clearly show a low-velocity anomaly related to hot materials of mantle intruding into the cold subducted slab. The TiO2 wt % contents, La/Yb-Sc/Ni, TiO2-MnO × 10-P2O5 × 10 and spidergram show a good agreement with the P-wave tomographic model, where the P-wave data clearly show cold material subducted beneath Krakatoa Volcano (Figure 7a). This condition implies a common magma genesis in the subduction system. On the other hand, the S-wave tomographic model shows more clearly the hot material of the mantle upwelling that intruded into the subducted slab beneath this volcano (Figure 7b) implying a magma genesis related to upper mantle plume.

Whole-rock geochemistry data in conjunction with Sr isotopic data have provided new insight into magma genesis beneath Krakatoa Volcano. We found that the data from eruptive products of 1883, 1981 and 2002 AD represent volcanic rocks derived from partial melting of the mantle wedge in the subduction system, as shown by the P-wave tomogram. The presence of partial melting of the mantle wedge and mantle upwelling beneath Krakatoa Volcano may be controlled by the thinning in the subducted slab as depicted clearly by the S-wave tomogram shown in Figure 7b, owing to strong slab pull in the eastern part of the Sunda Arc [11,13,18] and which may also be related to mantle upwelling beneath Krakatoa and the changing of the subduction style between Sumatra and Java.

We are thankful to the head and staff of BKSDA Bengkulu, Lampung Province, Sumatra for their permission, assistance and help during our field work. 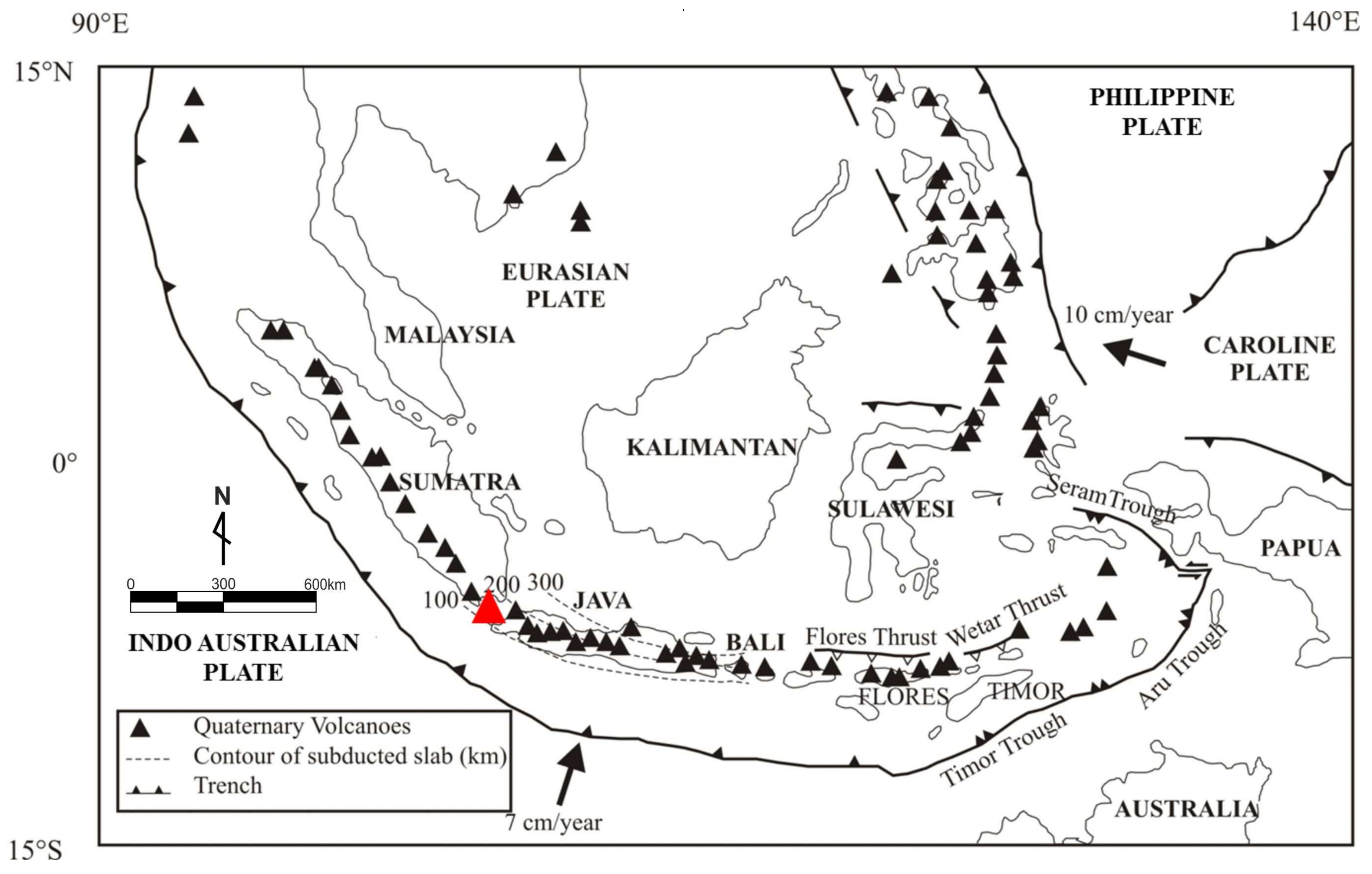 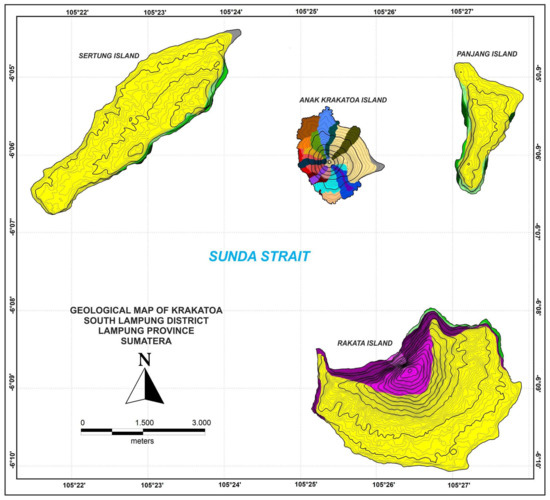 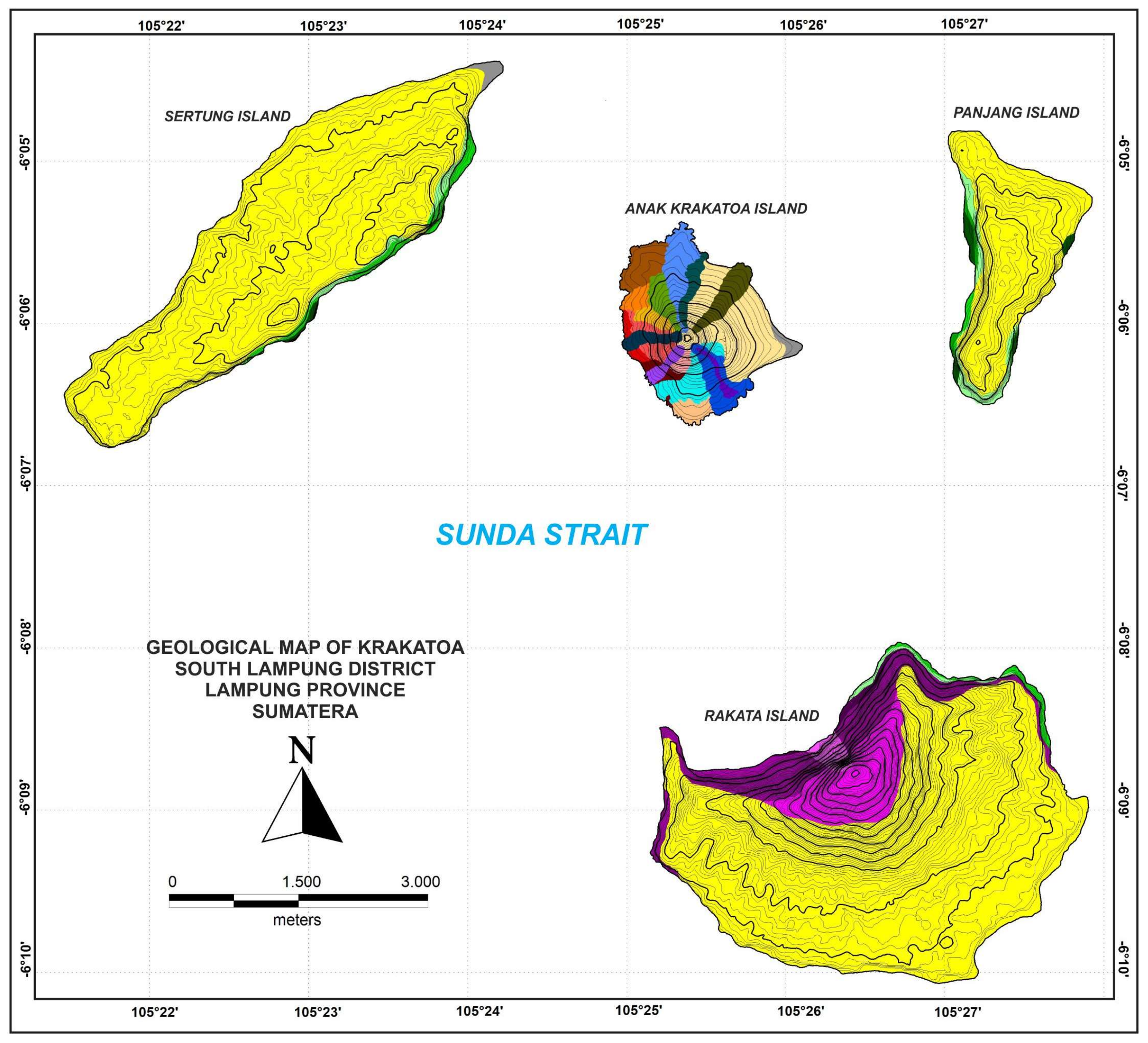 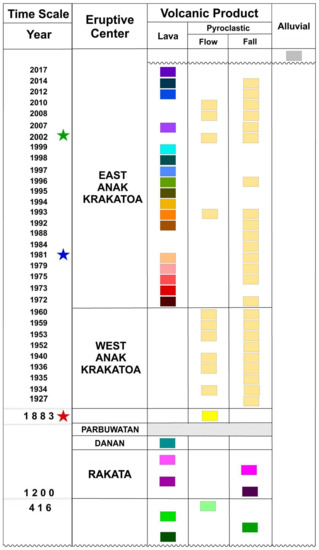 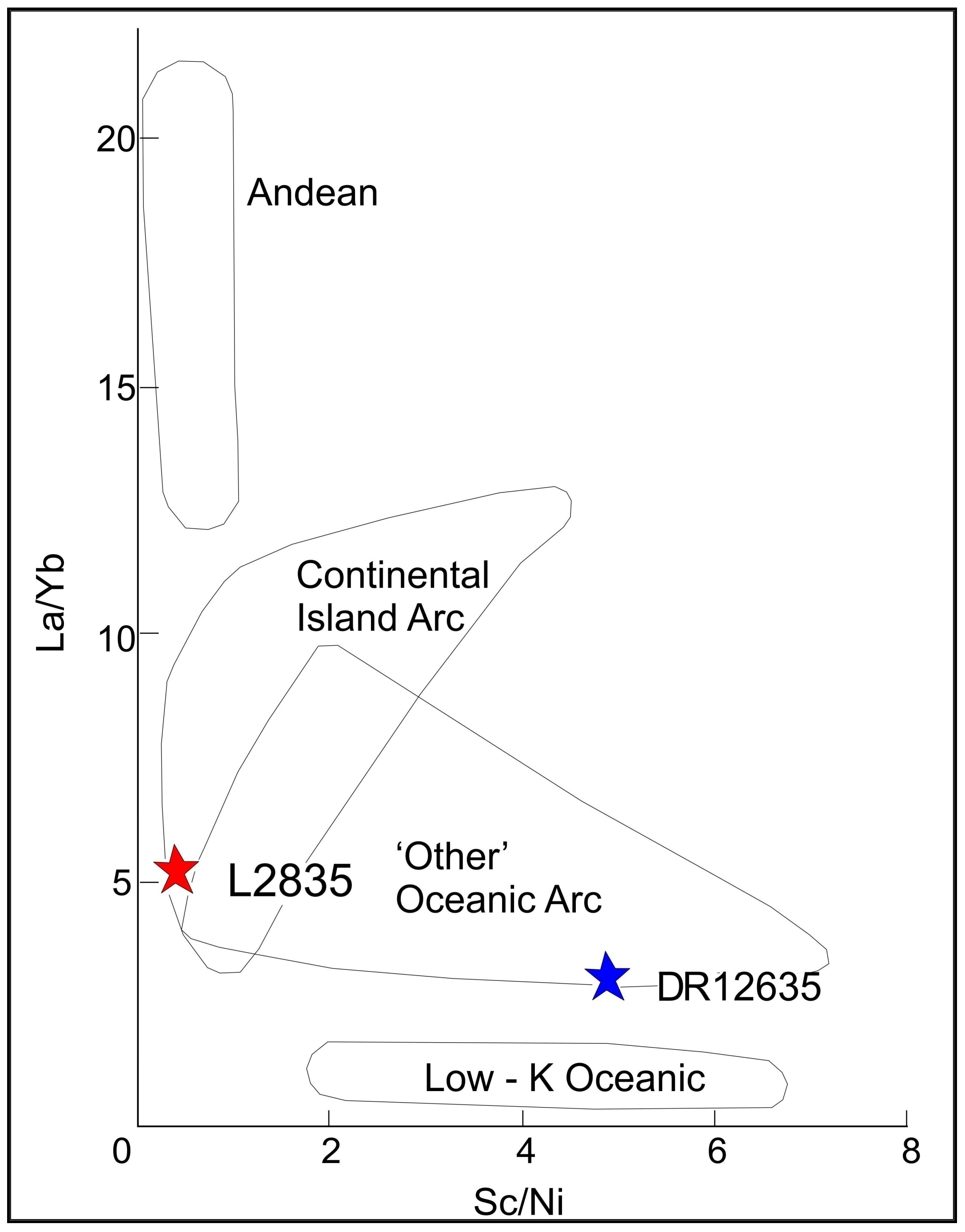 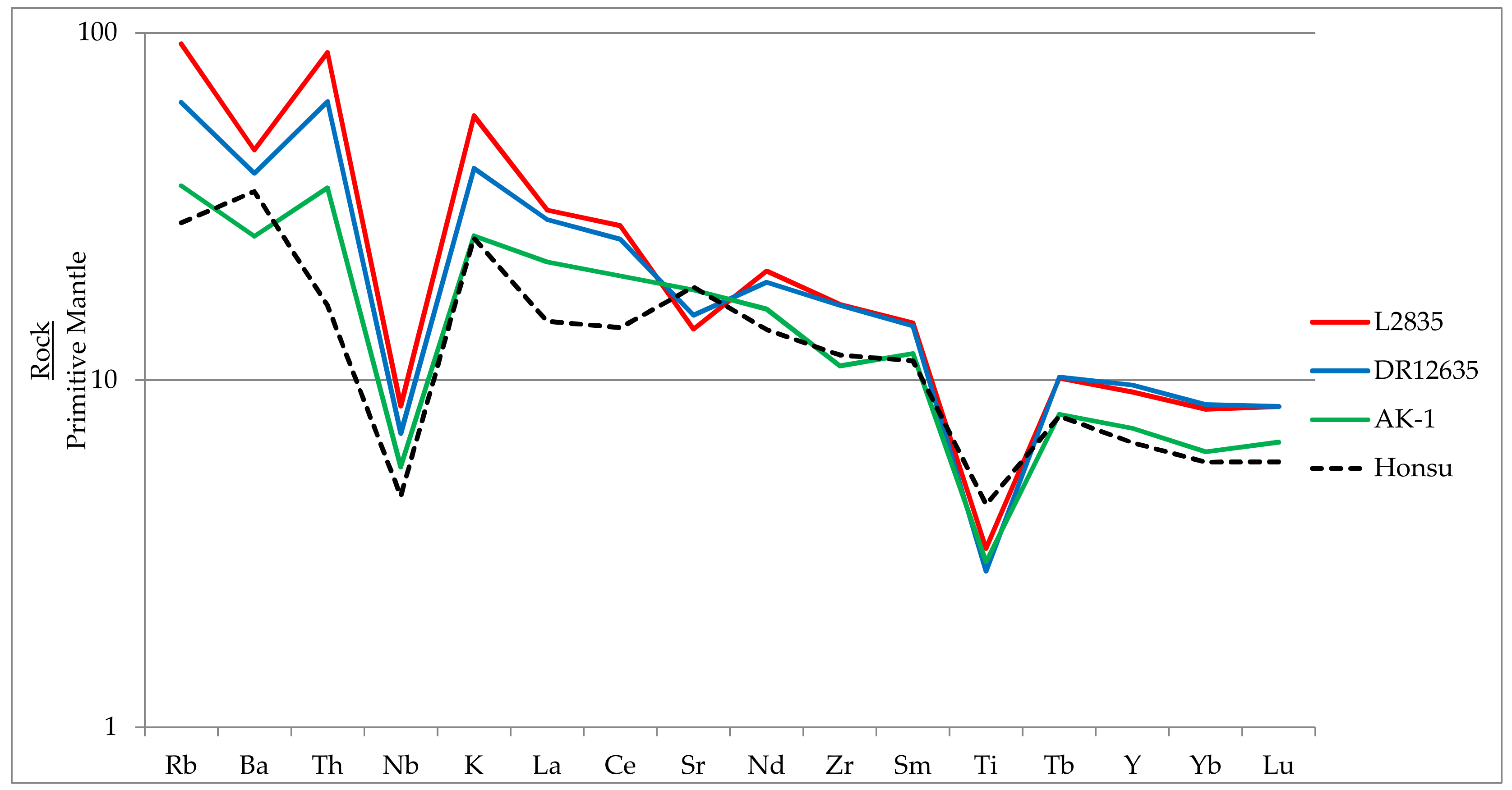 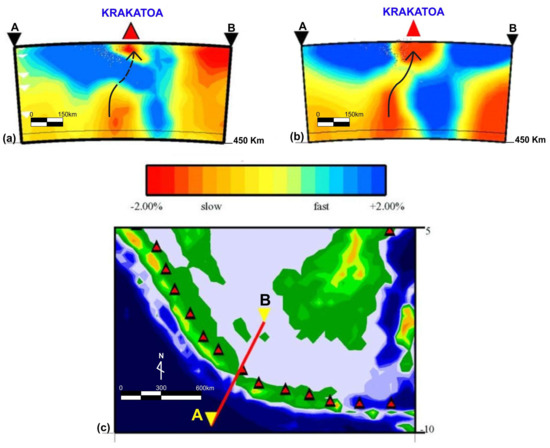