An Emerging Paradigm for the UNESCO Global Geoparks: The Ecosystem’s Health Provision
Previous Article in Journal

Environmental and Health: The Importance of Tremolite Occurence in the Pollino Geopark (Southern Italy)
Previous Article in Special Issue

To assess the current state of glacial lakes, we examine the seasonal lake-area changes of 339 glacial lakes in the Teskey and Kungoy Ranges of the Issyk-Kul Basin, Kyrgyzstan, during 2013–2016 based on optical satellite images (Landsat7/ETM+ and 8/OLI). The glacial lakes are classified into six types based on their seasonal variations in area: stable, increasing, decreasing, appearing, vanishing, and short-lived. We then track the number of each type in a given year and examine how each number changes from one year to the next. We find that many appearing, vanishing, and short-lived types occurred in both mountain ranges, having a large variability in number that is not directly related to the local short-term summer temperature anomaly, nor to precipitation or glacier recession. However, those in the Teskey Range vary significantly more than those in the Kungoy Range. To determine if the changing number and distribution of the various lake types may be due to changes in ground ice, we apply differential interferometric synthetic aperture radar (DInSAR) analysis using ALOS-2/PALSAR-2 for the debris landforms behind which glacial lakes appear. In the Teskey Range, ground ice occurs in 413 out of a total of 930 debris landforms, whereas in the Kungoy Range, ground ice occurs in 71 out of 180. In zones with predominant glacier-retreat during 1971–2010 (from Corona KH-4B and ALOS/PRISM), the Teskey Range had 180 new lake depressions as potential lake-basins, whereas the Kungoy Range had just 22. Existing depressions also expanded when melting ice produced subsidence. Such subsidence, together with debris landforms containing ground ice and ice tunnels, appear to cause the observed large number variability. In particular, the deposition of ice and debris by tunnel collapse or the freezing of storage water in a debris landform may close-off an ice tunnel, causing a lake to appear. Subsequent re-opening via melting of such blockage would produce either a vanishing or a short-lived type. In this way, the large variability in the number of each lake type and the distribution of types over this four-year period arises from regional geomorphological conditions and not directly from the local short-term summer temperature anomaly and precipitation or glacier recession. View Full-Text
Keywords: glacial lake; depressions; debris landform; geomorphological condition; DInSAR; Tien Shan glacial lake; depressions; debris landform; geomorphological condition; DInSAR; Tien Shan
►▼ Show Figures 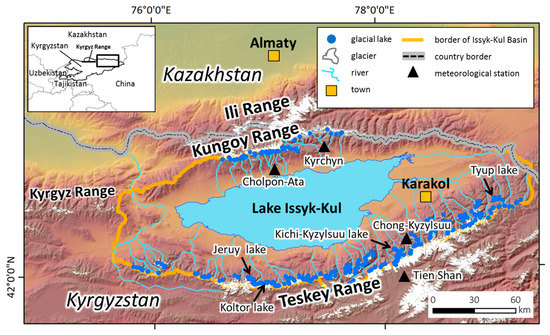