Environmental and Health: The Importance of Tremolite Occurence in the Pollino Geopark (Southern Italy)

Worldwide studies have been done about the toxicity and carcinogenicity of asbestos minerals occurring in ophiolitic rocks. Inhalation of asbestos due to environmental exposure could cause malignant mesothelioma and lung cancers. In particular, the ophiolitic rocks in Tethyan realm represents a serious enivironmental concern due to both the presence of asbestos-like minerals and the large Cr abundance that is prone to solubilisation as CrVI. At the Pollino Geopark (southern Apennines, Italy), serpentinites-rich ophiolite rocks and sediments of the Frido Unit crop-out. In these rocks, tremolite, an asbestos-like mineral, is typically intergrown with fibrous antigorite and chrysotile. Tremolite shows acicular, friable, fibrous, and elongated habitus, can be easily released into the environment as a result of both natural processes and anthropogenic activities. In the analyzed rocks, tremolite is present mainly in veins as much as in the matrix and forms crowns around clinopyroxene porphyroclasts. The different analytical techniques showed the recognition of the amphibole-like minerals (actinolite and tremolite) that are the dominant phases, with a small percentage of Fe2+. The presence of Fe in the “ideal” tremolite asbestos could cause pathological effects for the human living in the Pollino Geopark. This study has several environmental relevant implications, including, for example, the realization of national health protecting programs and the mapping of natural sites characterized by the presence of asbestos minerals in Pollino Geopark and in others area where outcrop asbestos bearing ophiolitic rocks. View Full-Text
Keywords: asbestos minerals; environmental implications; tremolite; serpentinite rocks; pleural mesothelioma asbestos minerals; environmental implications; tremolite; serpentinite rocks; pleural mesothelioma
►▼ Show Figures 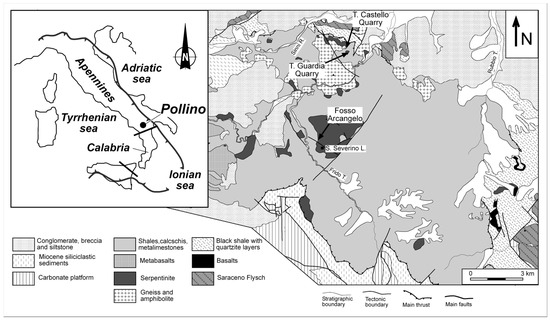