Geotourism Perspectives for Transhumance Routes. Analysis, Requalification and Virtual Tools for the Geoconservation Management of the Drove Roads in Southern Italy
Next Article in Special Issue

The Use of High-Resolution Historical Images to Analyse the Leopard Pattern in the Arid Area of La Alta Guajira, Colombia
Previous Article in Special Issue

The Tartoq greenstone belt of southwest Greenland represents a well-preserved section through >3 Ga old oceanic crust and has the potential to provide important constraints on the composition and geodynamics of the Archaean crust. Based on a detailed structural examination, it has been proposed that the belt records an early style of horizontal convergent plate tectonics where elevated temperatures, compared to the modern-day, led to repeated aborted subduction and tonalite–trondhjemite–granodiorite (TTG) type melt formation. This interpretation hinges on pressure–temperature (P–T) constraints for the belt, for which only preliminary estimates are currently available. Here, we present a detailed study of the pressure–temperature conditions and metamorphic histories for rocks from all fragments of the Tartoq belt using pseudosection modelling and geothermobarometry. We show that peak conditions are predominantly amphibolite facies, but range from 450 to 800 °C at up to 7.5 kbar; reaching anatexis with formation of TTG-type partial melts in the Bikuben segment. Emplacement of the Tartoq segments into the host TTG gneisses took place at approximately 3 Ga at 450–500 °C and 4 kbar as constrained from actinolite–chlorite–epidote–titanite–quartz parageneses, and was followed by extensive hydrothermal retrogression related to formation of shear zone-hosted gold mineralisation. Tourmaline thermometry and retrograde assemblages in mafic and ultramafic lithologies constrain this event to 380 ± 50 °C at a pressure below 1 kbar. Our results show that the convergent tectonics recorded by the Tartoq belt took place at a P–T gradient markedly shallower than that of modern-day subduction, resulting in a hot, weak and buoyant slab unable to generate and transfer ‘slab pull’, nor sustain a single continuous downgoing slab. The Tartoq belt suggests that convergence was instead accomplished by under-stacking of slabs from repeated aborted subduction. The shallow P–T path combined with thermal relaxation following subduction stalling subsequently resulted in partial melting and formation of TTG melts. View Full-Text
Keywords: Tartoq greenstone belt; metamorphic history; Archaean; Greenland; plate tectonics Tartoq greenstone belt; metamorphic history; Archaean; Greenland; plate tectonics
►▼ Show Figures 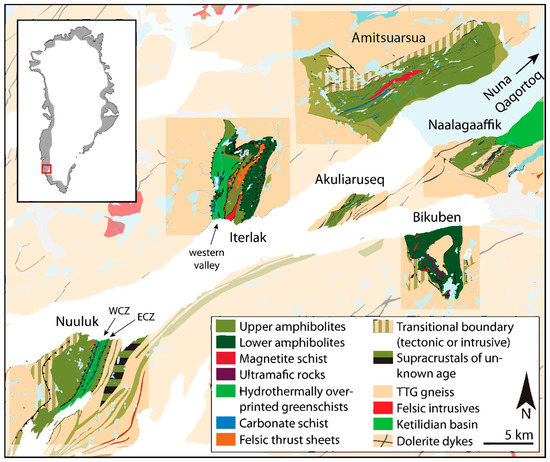