Potential evapotranspiration (ET0) is an indicator of great interest for water budget analysis and the agricultural sector. Therefore, the purpose of this study was to make the calculation reliable even if only the temperature data were present. In this research, the ET0 was initially calculated for a limited number of weather stations (12) using the Penman–Monteith method. In some cases, the simplified Penman–Monteith formula was adopted, while in others, as in the case of mountain weather stations, the complete formula was employed to consider the differences in vegetation, deduced from satellite surveys. Subsequently, the ET0 was calculated with the Hargreaves–Samani (HS) formula, calibrating the Hargreaves coefficient, through the spatialization of ET0, by the geostatistical method. The results showed a high reliability of the HS method in comparison with simplified PM (PM) method, and complete Penman–Monteith (cPM) method, with a minimum calibration of the empirical Hargreaves coefficient. In particular, a very good correlation between the results obtained in the mountain environment with the uncalibrated HS method and the cPM method was also observed in this area, while PM showed discordant and much higher results than ET0 compared with the other methods. It follows that this procedure allowed a more accurate estimate of potential evapotranspiration with a view to territory management, both in terms of water resources and the irrigation needs of the vegetation. View Full-Text
Keywords: interpolation; GIS; ET0; kriging; Penman–Monteith; Hargreaves interpolation; GIS; ET0; kriging; Penman–Monteith; Hargreaves
►▼ Show Figures 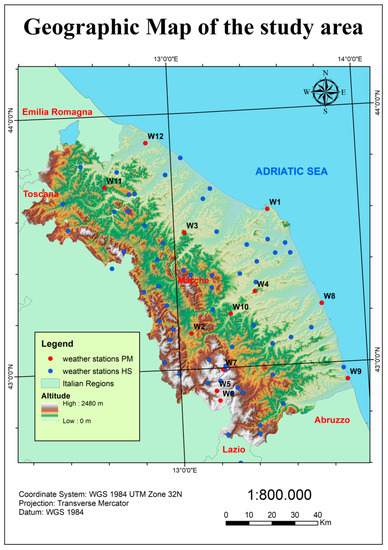