Evolutionary Models of the Cenozoic Basins of Central-Western Mediterranean Area: A Review of Methodological Approaches

In the last 40 years, several models based on very different methodological approaches have been proposed to interpret the complex geodynamic evolution of the central-western Mediterranean area and, in particular, of the Cenozoic basins. The persistence of numerous interpretations and still-open problems resulted in the proliferation of very different models. The reconstructions presented are highly influenced by difficulties often encountered in considering constraints introduced by models built by means of completely different methodological approaches. For example, major difficulties can arise in integrating data from individual classical disciplines (i.e., geology, stratigraphy, geophysics, tectonics, magmatology and plate kinematics) with those resulting from the use of modern technologies (i.e., digital processing, uses of software, field observations using drones, etc.) and generally aimed to support specific topics. These considerations lead researchers to believe that a multidisciplinary approach would always be auspicious for these studies, because a greater control of the reconstruction of geologic and geodynamic events, and, therefore, for resulting models, would be ensured. After some considerations about different types of literature models based on specific investigation methodologies, the updating of a recently presented evolutionary model is proposed by attempting to integrate as much data as possible about the Cenozoic basins of the central-western Mediterranean area. View Full-Text
Keywords: Mediterranean area; geodynamic models; methodological approach; geological evolution Mediterranean area; geodynamic models; methodological approach; geological evolution
►▼ Show Figures 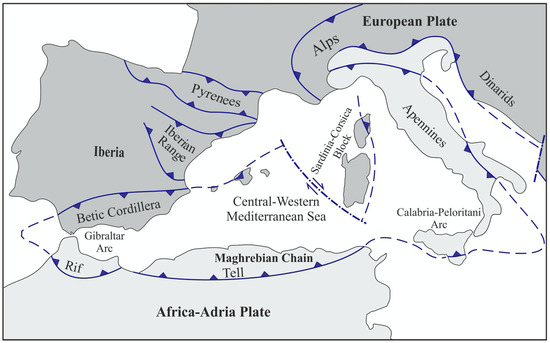