Long-Lasting Patterns in 3 kHz Electromagnetic Time Series after the ML = 6.6 Earthquake of 2018-10-25 near Zakynthos, Greece

This paper reports one-month 3 kHz EM disturbances recorded at Kardamas, Ilia, Greece after a strong earthquake occurred on 2018/10/25 near Zakynthos and Ilia. During this period 17 earthquakes occurred with magnitudes and and depths between 3 km and 17 km, all near Zakynthos and Ilia. A two-stage, fully computational methodology was applied to the outcomes of five different time-evolving chaos analysis techniques (DFA, fractal dimension analysis through Higuchi, Katz and Sevcik methods and power-law analysis). Via literature-based thresholds, the out-of-threshold results of all chaos analysis methods were located and from these, the common time instances of 13 selected combinations per five, four, three and two methods. Numerous persistent segments were located with DFA exponents between , fractal dimensions between and power-law exponents between . Out of the 17 earthquakes, six earthquakes were jointly matched by 13 selected combinations of five, four, three and two chaos analysis methods, four earthquakes by all combinations of four, three and two, while the remaining seven earthquakes were matched by at least one combination of three methods. All meta-analysis matches are within typical forecast periods. View Full-Text
Keywords: DFA; fractal dimension; Katz; Higuchi; Sevcik; spectral fractal analysis; kHz; earthquakes DFA; fractal dimension; Katz; Higuchi; Sevcik; spectral fractal analysis; kHz; earthquakes
►▼ Show Figures 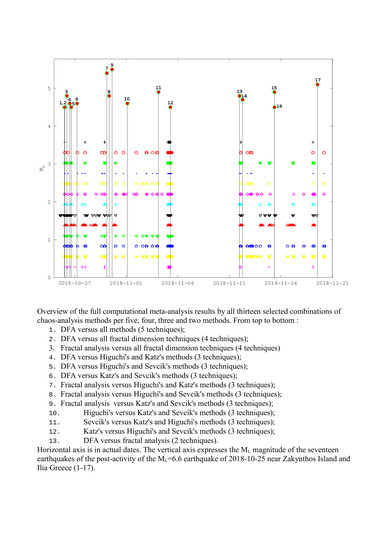