Sea Level Trend and Fronts in the South Atlantic Ocean

The understanding of the physical drivers of sea level trend is crucial on global and regional scales. In particular, little is known about the sea level trend in the South Atlantic Ocean in comparison with other parts of the world. In this work, we computed the South Atlantic mean sea level (SAMSL) trend from 25 years of satellite altimetry data, and we analyzed the contributions of steric height (thermosteric and halosteric components) and ocean mass changes for the period 2005–2016 when all the source data used (Argo, GRACE and satellite altimetry) overlap. The SAMSL trend is 2.65 ± 0.24 mm/yr and is mostly explained by ocean mass trend, which is 2.22 ± 0.21 mm/yr. However, between 50° S–33° S, the steric height component constitutes the main contribution in comparison with the ocean mass component. Within that latitudinal band, three regions with trend values higher than the SAMSL trend are observed when considering 25 years of satellite SLA. In the three regions, a southward displacement of the Subtropical, Subantarctic, and Polar Fronts is observed. The southward shift of the fronts is associated with the strengthening and polar shift of westerly winds and contributes to a clear thermosteric trend that translates to the SLA trend observed in those regions. View Full-Text
Keywords: sea level trend; South Atlantic; ocean mass; steric height; satellite altimetry sea level trend; South Atlantic; ocean mass; steric height; satellite altimetry
►▼ Show Figures 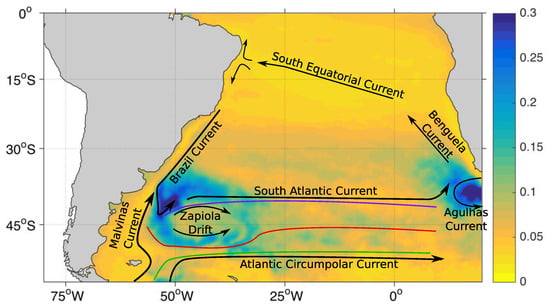