We revealed the regional features of the functioning of the erosion-channel systems of the Angara, Upper Lena, Selenga, and Upper Amur basins in the south of Eastern Siberia and examined the action of sloping non-channel, temporary, and permanent channel water flows, and presented the patterns of the spatial distribution of soil and gully erosion belts. The development conditions and factors of fluvial processes are considered and the role of cryogenic processes in the increasing activity of water flows is emphasized. The interdecadal dynamic cycles of the erosion-accumulative processes are revealed. A quantitative assessment of soil loss from erosion on agricultural land in the forest-steppe basins was carried out. We made an assessment of the plane deformation of the upper course of the Lena river (Siberian platform) and Irkut (Baikal rift zone and the Irkutsk-Cheremkhovo plain) using cartographic sources of different times, aerial photographs, and satellite imagery. The contribution of extreme fluvial events to sediment redistribution in river basins is shown. Particular attention is paid to the mudflow impact, floods, and channel deformations on the ecological state of the basin systems. View Full-Text
Keywords: river basins; soil erosion; gullies; channel processes; mudflows; Eastern Siberia river basins; soil erosion; gullies; channel processes; mudflows; Eastern Siberia
►▼ Show Figures 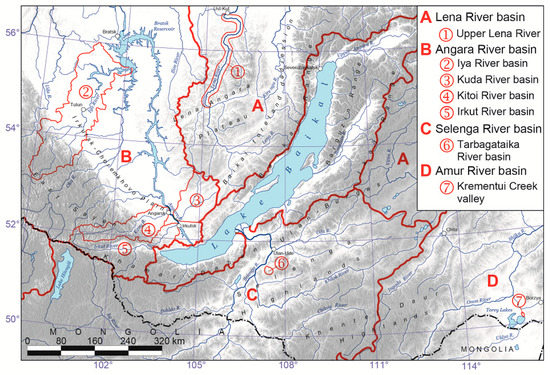 
Bazhenova, Olga I.; Bardash, Aleksandr V.; Makarov, Stanislav A.; Opekunova, Marina Y.; Tukhta, Sergei A.; Tyumentseva, Elizaveta M. 2020. "The Functioning of Erosion-channel Systems of the River Basins of the South of Eastern Siberia." Geosciences 10, no. 5: 176.